Tianjin JMT meet Beijing Guoan in the Chinese Super League on Sunday, July 3rd. Beijing Guoan are unbeaten in five games ahead of their test against Tianjin JMT. Read our free predictions and find the latest odds for the fixture below in our detailed match preview.

Tianjin JMT are in the midst of a three-game winning streak as they prepare to face another in-form team, Beijing Guoan, in the Super League. Read our top three predictions for this weekend’s fixture below.

Tianjin JMT won for the third time on the spin on Wednesday when they turned over Shenzhen, though their streak could be ended by in-form Beijing Guoan on Sunday. The Imperial Guards are unbeaten in five assignments and among their three wins during that run was a 1-0 victory over Tianjin in June. With that relatively recent triumph still fresh in the players’ minds, we recommend siding with Beijing again this weekend.

Tianjin JMT’s meeting with Beijing Guoan last month went right to the wire and there was little to choose between the sides before Croatian Marko Dabro netted an 86th-minute winner for The Imperial Guards. The evidence presented that day suggests that another keenly contested affair could be on the cards when the teams meet again on Sunday and with margins likely to be slim, backing under 2.5 goals to hit the net again could be the way to go.

View our selection of key stats for Sunday’s game below alongside a tool to help you choose the best odds.

You can find all of the latest team news and injury updates for Tianjin JMT vs Beijing Guoan in the Chinese Super League on Sunday below.

Zhang Yi is still absent from the Tianjin JMT with an injury while defender Qian Yumiao is rated as Tianjin came from behind twice to beat Shenzhen in midweek, recording their third straight win in the process. JMT could overtake Beijing with the right result against them on Sunday.

Li Ke has been ruled out of Sunday's game, while Adegbenro, Jin Pengxiang and first-choice keeper Hou Sen are all rated as 50/50. Guoan were without all four of those players when they were held to a 1-1 draw by Cangzhou Mighty Lions in their last Super League fixture. 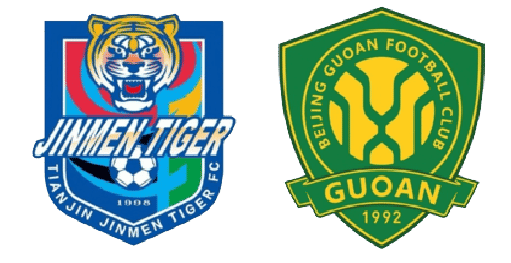 Who is manager of Tianjin JMT?

Yu Genwei is in charge of Tianjin JMT having been given the job in August last year.