It can't be easy being the little brother of Eden Hazard. The Chelsea No.10 is a global star and is regarded as one of the best footballers on the planet. His shadow must be hard to escape.

Yet Thorgan has managed it. Over the past five years, the second oldest of the four Hazard brothers – all of whom are professional footballers – has proven himself one of the most effective wingers in the Bundesliga.

He has become a leader of the Borussia Mönchengladbach side and this term has struck 12 goals and claimed 11 assists in all competitions. His form has resulted in interest from elsewhere. According to German outlet Kicker, Borussia Dortmund are ready to make a move when this season ends but Belgian newspaper Het Nieuwsblad claims Liverpool have already submitted a bid.

“He has now told us that he doesn't want to extend his contract and instead wants to take the next step in his career by leaving the club,” Gladbach sporting director Max Eberl explained. “However, he still has a contract with us until 2020 and there is no release clause.

“Interested parties have to offer us a transfer fee that recognises his worth as an exceptional Bundesliga forward and a regular feature in one of the best national teams in the world.”

Gladbach are set to demand around £35million for Hazard. Given his contract situation, few clubs would be willing to pay more. Liverpool, though, can and are prepared, according to the reports, to go up to £40million to land the 26-year-old winger.

Is he worth such an outlay, though? The Reds' front three, when fit, is almost set in stone. Sadio Mané starts on the left. Roberto Firmino in the centre. And Mohamed Salah is on the right, although he has often drifted inside to play the No.9 role.

When in form, there isn't another front three as effective and dynamic as the Liverpool trio. Their pace, movement and ruthlessness can break apart even the tightness of defences.

However, Mané, Firmino and Salah can't – or shouldn't – be relied upon every week. Their workload should be eased when possible, and that is where Hazard would come in.

The Belgium international is capable of playing on either flank and has also been used, on occasion, as a No.10. His favoured position, though, is off the left of the front three, much like his older brother. 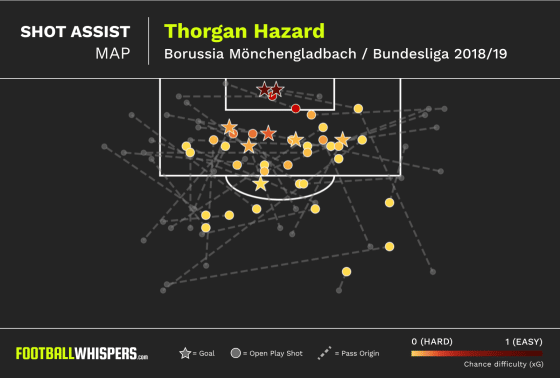 Yet Thorgan's game is very different to Eden's. Yes, he can be an effective dribbler, and only six Bundesliga forwards can better his 2.14 dribbles per 90, but it's his ability without the ball that stands out.

Hazard is not a Raumdeuter – space interpreter – in the fashion of Thomas Müller yet he is excellent at filling holes between the lines and breaking defensive structure with his movement.

This combination of intelligence, technique and work rate is why he has become such a threat – he is first among Bundesliga forwards this season for big chances created per 90 (0.61).

In this respect, Hazard is different from Mané and Salah. He is a creator from wide areas rather than a goalscorer. As the graphic below highlights. 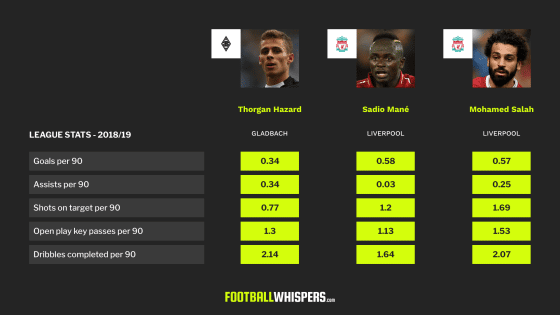 Liverpool have lacked an attacker of this ilk – one capable of unlocking defences through subtly – since Philippe Coutinho departed for Barcelona. It was hoped Xherdan Shaqiri would fill the void, at least partly, but he has been overlooked by Jürgen Klopp since February.

The Swiss star can be a match-winner and has proven that at times this season, most notably against Manchester United in December. But he is something of a wildcard and in a tight title race, hasn't been trusted.

Klopp would have no such issue with Hazard if he were to arrive at Anfield this summer. He is dependable, consistent and is a willing worker – no Bundesliga attacker has completed more tackles this season than the Belgian (27).

At £40million Hazard would be an excellent signing for Liverpool. The only problem is convincing him a move to Anfield is the right step given Dortmund's interest.