Once upon a time, the Premier League was defined by the power, presence and the tenacity of their midfielders. Patrick Vieira patrolled the middle third for Arsenal, Manchester United had Roy Keane, Steven Gerrard dominated for Liverpool and Claude Makélélé ran the show for Chelsea.

But that hasn't been the case for a long, long time now.

Teams started to rely on more fleet-footed individuals, often converting attackers into box-to-box midfielders. There was less reliance on what they could in the defensive third and more emphasis on what they brought to the attack.

But football moves in cycles and having a physical midfield is very much back in fashion. Premier League leaders Liverpool often field Jordan Henderson, Fabinho and Gini Wijnaldum in that area of the pitch. On an individual basis, the trio probably don’t make it into the top ten midfielders in Europe. As a collective, they’re instrumental to how the best club team in the world – they have a trophy to back up that statement – play.

Manchester City broke their club record to land Rodri during the summer, viewing the Spaniard as a long-term successor to Fernandinho. Wilfred Ndidi has bossed the midfield for Leicester City despite the plaudits going to Jamie Vardy and James Maddison.

These midfielders are very much en-trend. And the demand is on the rise.

According to reports in Spain, a host of Premier League clubs are looking to sign Atlético Madrid’s Thomas Partey. The 26-year-old has a £42million release clause makes him an attainable target. Arsenal are interested, while the Ghanian has been on Manchester United’s radar for the best part of two seasons. Liverpool are also keeping tabs on him.

Partey has already passed his Emirates Stadium audition. He was peerless in Atleti's 1-1 draw with Arsenal in the first leg of the 2018 Europa League semi-final, despite spending 80 minutes at right-back following Sime Vrsaljko's early dismissal. To say he played at full-back that night would do Partey a disservice, though. He was here, there and everywhere, influencing proceedings the entire time.

He's set to line up for Simeone's men at Anfield next week with Los Rojiblancos taking a 1-0 lead into the tie. Pass that test and the queue for his signature will likely swell.

Long linked with a switch to England, Partey's agent, Daniel Jiménez, is currently locked in negotiations with Atlético's hierarchy over a new deal. But it seems inevitable that if an agreement can't be struck, the Premier League will be his next stop. 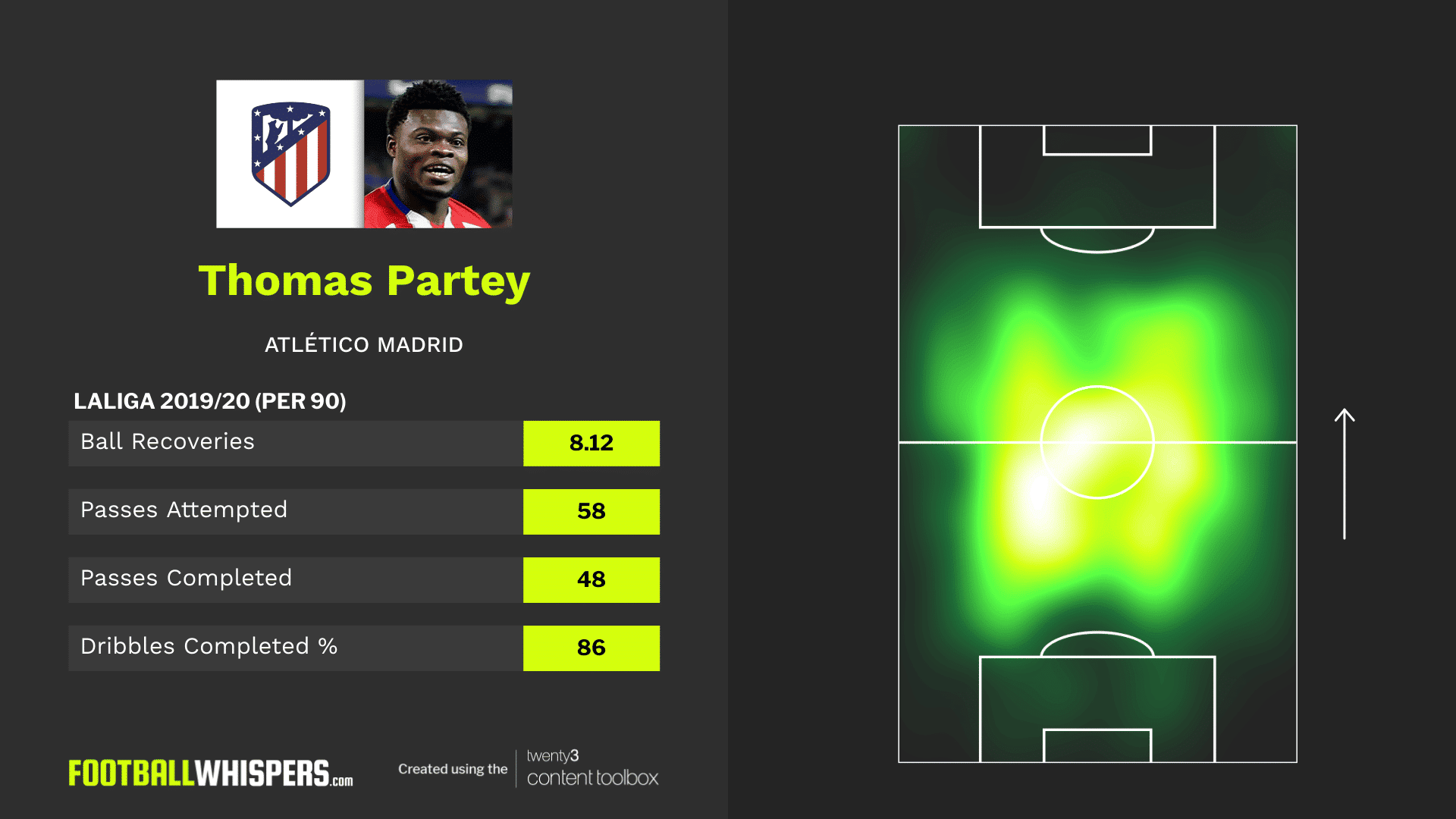 “I don’t really read too much into what the media say regarding me moving, I leave that all to my management but of course everybody knows the English game is one of the best in the world,” Partey told The Independent in 2018.

“I have played in their stadiums twice already this season at Stamford Bridge and at the Emirates and I know how the atmosphere is but at the minute I am so happy in Madrid.”

Recent reports indicate the 27-cap international is still happy at the Wanda Metropolitano and that he isn't actively looking to move anytime soon. But money talks and though Atléti are one of the best teams in Spain, they can't compete with the riches of the Premier League.

Teams are right to be taking an interest in Partey. Before delving into the numbers behind his impressive season, there are a number of things to consider. Playing as a midfielder for Atléti, you're going to be busy defensively and you aren't going to be much of a goal threat. So judging him on the latter would be pointless.

What anyone who signs the 26-year-old will be getting is a destroyer and a conductor. The latter is often overlooked when talking about Partey as a player but that skillset is perhaps what makes him so desirable to Premier League clubs.

On average this term, the Atléti No.5 is attempting 58 passes and completing 48. Impressively, 36 per cent of his passes go forward. He doesn't just keep things simple and instead looks to get the LaLiga side on the front foot when possible.

Partey is also a competent dribbler. He attempts, on average, 2.6 per 90 and completes 86 per cent. He's frugal in possession, both when playing passes and when carrying the ball.

He can pick a pass and he can create space. Though it sounds simple, they're two important traits for a midfielder. To go alongside those aspects of his game, the Atléti man is an elite reader of the game. His 8.12 ball recoveries per 90 puts him in the top 20 in LaLiga and the 4.45 he wins in the middle third see him ranked ninth. He also wins 70 per cent of his aerial duels.

The £42million-rated midfielder is a one-man wrecking ball who just so happens to be able to play football. Perfect for the Premier League.