From outcast to undroppable, bit-part player to centre-stage: Jesse Lingard's recent development has been nothing short of astronomical.

Now 25, the Manchester United academy graduate was, no too long ago, deemed by many to have outstayed his welcome at Old Trafford, destined never to reach the required level to become a valued squad member at the Theatre of Dreams.

Now, though, under the careful tutelage of José Mourinho, the once-maligned attacker is thriving.

The wining goal in the 2016 FA Cup final was a picture-book moment for Lingard, a United fan born and bred. But that, and even subsequent Wembley strikes against Leicester City in the Community Shield and Southampton in last year's League Cup final, did little to convince a large portion of the United fanbase of his worth.

There can no longer be any such doubts, though, so impressive has Lingard's form been this season. Whether deployed on the left flank or the right, as a No.10 or deeper in midfield, he has consistently produced the goods.

His 11 goals, already a single-season career high, have not all come in moments of Red Devils dominance, either. Lingard has often been the man to drag United out of a mire or inspire them to victory in a tight encounter – take his recent two-goals substitute appearance to rescue Mourinho's men from an embarrassing home defeat to Burnley in December, or his brace away to Arsenal the same month.

Having first developed a thirst for the big occasion, Lingard is now United's man for every season; come rain, sleet or snow, whether winning, losing or drawing, he is invariably on hand with a telling contribution, and often in spectacular fashion.

It's easy to forget that, just three season ago, Lingard spent time on loan in the Championship with Derby County. And few who saw his displays at Pride Park would have envisaged a time when he is among the first names on the teamsheet at Old Trafford.

Always a grafter, willing to put in a shift and do a tactical job, it was a deficit of real, top-class talent that seemed to doom Lingard to a life away from football's elite. Now, though, with solo dribbles, intricate link play and rasping shots from distance a common occurrence, there are no such concerns.

Looking at Lingard's statistics for the last three seasons, the former Birmingham City and Leicester City loanee's development is evident.

Most obviously, his goals return has shot up exponentially, improving from four league strikes in 2014/15 and one last season to seven already this term. His average of a goal every 132 minutes in 2017/18 blows away his previous best of one every 408 minutes.

As a creative influence within this United side, Lingard's biggest developmental leap was made last term, when his key passes per 90 minutes shot up from 0.77 the season before to 1.98. He has fallen back slightly in this regard in 2017/18, dropping to 1.45 per 90.

The key passes statistic doesn't tell the whole tale, though. The metric merely measures the amount of passes a player plays which result in a shot being taken. The expected assists (xA) measurement, however, places a qualitative value on these passes based on the position from which the subsequent shot is taken and the statistical likelihood of it being scored.

Likewise, simply looking at a player's goals return doesn't always tell us a great deal about their ability to seek and convert scoring chances. For this, the expected goals (xG) metric gives a much clearer picture.

Like xA, xG measures the statistical likelihood of each shot resulting in a goal based on historical data. A high xG score indicates a player's ability to get into scoring position. If their actual goals falls below their xG over a significant period of time, there may be issues with their finishing.

Lingard has no such problem. His xG per 90 this season in 0.53 – behind only Romelu Lukaku (0.6) and Marouane Fellaini (0.62) at United – while his 0.7 goals scored per 90 proves he is more-than-capably dispatching the chances he receives. 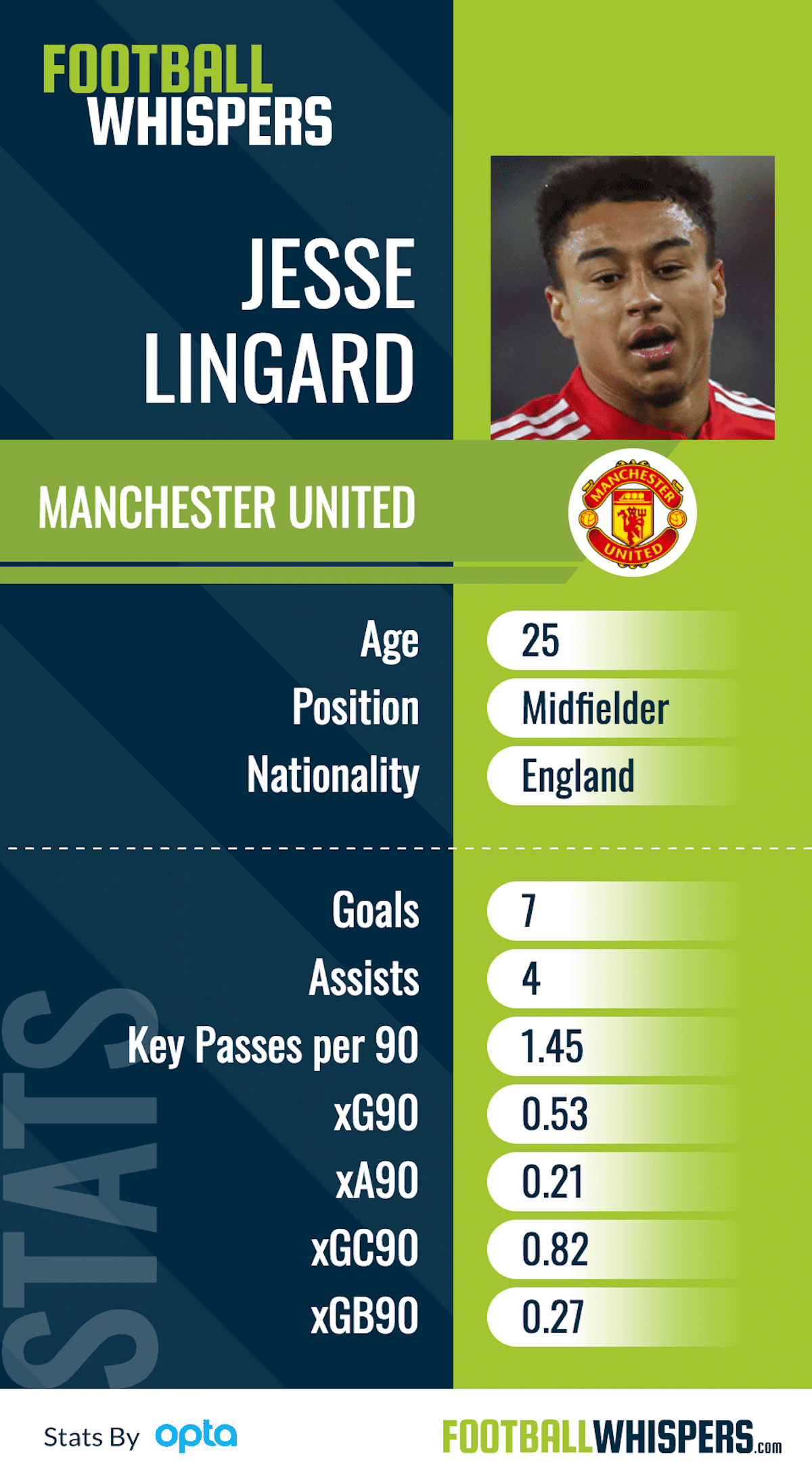 Indeed, Lingard's ability to seek out scoring opportunities is one of the biggest improvements in his game in recent years, rising from 0.18 xG per 90 two seasons ago and 0.24 last term.

Another telling metric is a player's xG chain (xGC) score. This is a measurement which attempts to recognise the contribution of not only players who score or assist, but who are also involved at an early stage in a move that leads to a goal. Whenever a player is part of an unbroken spell of possession that leads to a shot, no matter if they play the first pass, the last or take the shot themselves, the xG score of the shot is added to their xGC.

Lingard's xGC per 90 this season of 0.82 is the third-best of the United players with more than 400 league minutes to their name – Anthony Martial (0.89) and Lukaku (0.87) currently occupy first and second place.

Equally as interesting, and perhaps even slightly more instructive when it comes to the value of a player's deeper contribution, is the xG build-up (xGB) measurement. This is almost identical to xGC, only it discounts the player making either the key pass or the shot in any possession, thus preventing high-scoring or -assisting players from dominating the stats.

In this regard, Lingard ranks seventh at United this term, with 0.27 xGB, down from 0.39 last term – when, as discussed, his main creative development came – but an improvement on the season before's 0.25.

The across-the-board improvements Lingard has made statistically over the last three seasons are staggering in terms of the sheer numerical uptick. But just as impressive is how the numbers help demonstrate such a broad development in a man who had long been thought of as having a low ceiling.

As Lingard is showing this season, he's all about proving people wrong.