For two seasons, Monaco were the darling club of European football. Isn't it great how they sign young players, people asked. Isn't it fantastic how they play these kids and sell them on at a vast prophet, others added.

Meanwhile, at the opposite end of the country, those of a Lille persuasion will have snorted and then pointed out their club had been doing exactly the same for many a year.

Lille's ability to spot raw potential and hone it continues to this day. This summer, Nicolas Pépé is expected to join one of Europe's elite clubs and the Ligue 1 side hope to receive around £70million for the winger.

The Ivorian is unlikely to be the only departure. Rafael Leão, the young Portuguese forward, is on Barcelona's radar. Jonathan Bamba is a target for Premier League clubs, too.

And then there is Thiago Mendes, the Brazilian who has been linked with both Everton and Chelsea this week.

Mendes is no wide-eyed youngster with the world at his feet. He is 27 years old and an experienced, battle-hardened professional. He has worked hard on his game since he arrived at Lille in 2017, ironed out flaws to ensure he blossomed into one of the French top flight's most accomplished midfielders.

At Lille this season, things have been easy. The club have played swift and clinical counter-attacking football. Confidence is high, pressure off, and the club sit second in Ligue 1 as a result.

Last term was very different for the side from northern France, though. They were embroiled in a desperate battle for survival, on the brink of collapse due to financial mismanagement and the calamitous reign of Marcelo Bielsa.

Even then Mendes impressed. He was often the to-go midfielder, a player who could fill any gap. Need a No.6 to play out from the back? Mendes was the obvious choice. A creator further up the pitch require? Well, Mendes could do that, too.

He did lose his place for a short period – Christophe Galtier turned to experienced Ligue 1 campaigners in the final weeks of the season – but soon won it back.

Mendes' versatility would be a vital commodity to clubs at the top level, however, it's not his M.O. He should be judged on his performances in his preferred role, which is to sit in front of the back four. 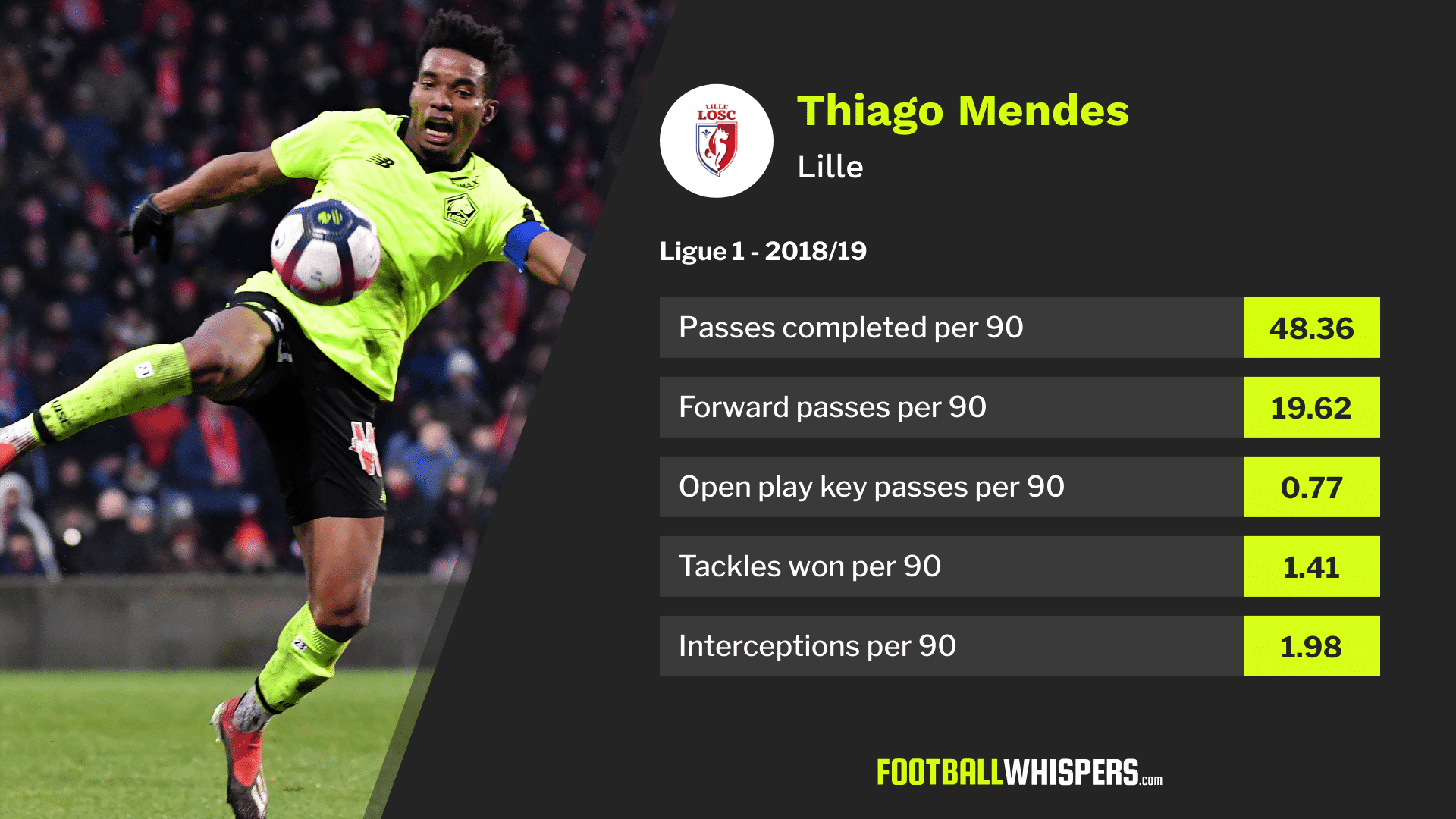 There are two primary variations to this position.

The first is the midfield destroyer, the player who snuffs out opposition attacks and then gives the ball to more talented teammates. The second is the deep-lying orchestrator, the midfielder who collects the ball off the centre-backs and builds possession

Which box does Mendes tick? Well, both. He is a hybrid of the two; a player through which Lille construct attacks but one they rely on to help stifle opponents.

His numbers reflect that. He is sixth among Ligue 1 midfielders for interceptions per 90 and third for possession won in the middle third per 90 (5.15). But Mendes has also completed more passes than all but six midfielders this term, and 34.1 per cent of those have gone forward.

His expected goals assisted per 90 of 0.06 is low, however, that isn't a huge surprise given his deeper role. Mendes is often the player who plays the pass before the assist and without him in the side, Pépé would not be as big a threat.

The passing sonar below is taken from the Football Whispers lab and highlights the number of long passes to the right side of the pitch Mendes plays. These are specifically for Pépé, who often breaks into space, collects the ball and then wreaks havoc. 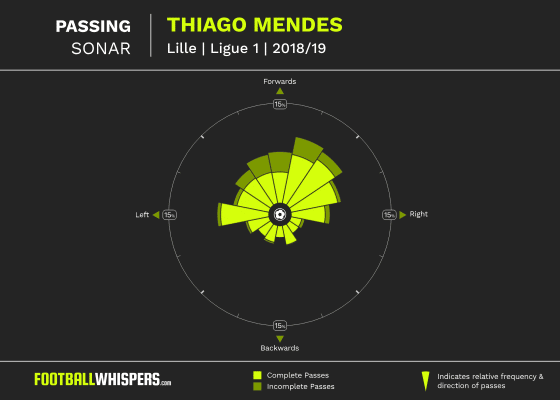 The big question would be whether Mendes could be as influential at another club, namely Everton and Chelsea – although Crystal Palace and West Ham have also been linked and Roma have a long-standing interest.

Everton are likely to want him as a replacement for Gueye, who has been linked with a move to Manchester United and remains a Paris Saint-Germain transfer target.

The Senegalese midfielder is an exceptional destroyer in the middle third, which is why he's won more tackles in the Premier League this season than any other player. Mendes could do a similar job but has more strings to his bow with the ball, not to utilise them would be a waste.

Chelsea, meanwhile, need to improve their midfield. Mateo Kovačić is very unlikely to be kept on after an underwhelming loan spell while there is no alternative to Jorginho for Maurizio Sarri, who could depart at the end of this season.

Of course, the Blues may not be able to sign players this summer due to their looming transfer ban. If they can, and for the right price, Mendes would be a viable option.

He has the passing range required to deputise for Jorginho but could also be used in one of the two other midfield roles in Sarri's system.

The big question mark would be over whether Mendes could perform in a possession-based system rather than the counter-attacking set-up he's thrived in at Lille. His technical quality and smart use of the ball suggest so but it's not a guarantee.

Yet at £30m, his reported price tag, Mendes would be an ideal investment for Chelsea, Everton or any Premier League side. Talented, effective and versatile, it won't be a surprise to see him join the long list of Lille exports very soon.