The 2017/18 season saw a number of players step out from the shadows and steal the limelight away from the usual suspects.

Mohamed Salah, dubbed a flop due to his time at Chelsea, has stunned the world with his performances for Liverpool both domestically as well as on the continent.

The Egyptian, who netted on the final day of the season to ensure the Reds would be playing Champions League football for the second successive season, broke the Premier League record for goals scored in a 38-game season.

Florian Thauvin, once of Newcastle United, starred for Marseille in Ligue 1. With one game left to play in the French top flight, the winger has 22 goals and 11 assists from 34 starts.

Ciro Immobile, with 29 goals to his name and a game still to play, has had his most productive season to date. Likewise, Mariano, who Lyon signed to replace Alexandre Lacazette, has relished his opportunity at the Groupama Stadium, scoring 18 Ligue 1 goals in his debut season with the club.

However, here at Football Whispers, we're looking for the next big thing. With that in mind, we've taken a look at players aged 21 and under to see who has shone this season despite their inexperience. The next great goalscorer might already be plying his trade in one of the top five leagues across Europe.

The list below looks at players, with more than 1,000 minutes in the league with the highest goals per 90 ratio. 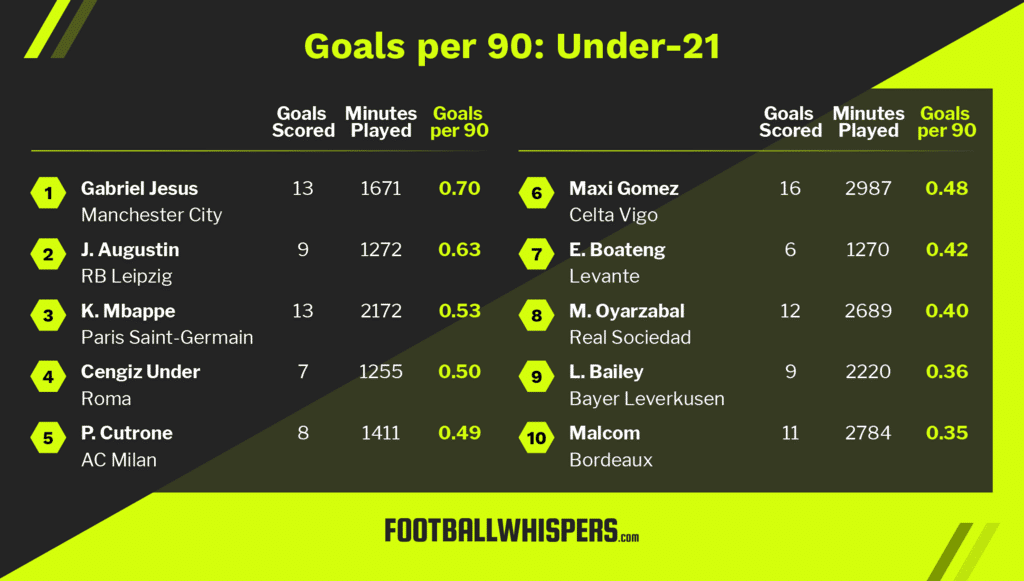 It's no surprise to see Manchester City hitman  Gabriel Jesus top the list. The Premier League winner appears to be Pep Guardiola's first-choice striker and he's responded well to the pressure placed on his shoulders. An injury-hit season still saw him finish with a record of 0.7 goals per 90 minutes.

Jean-Kévin Augustin‘s move to RB Leipzig last summer went under the radar. The Bundesliga outfit parted with €13million to pry him away from Paris Saint-Germain and the Paris-born 20-year-old has thrived in the environment at the Red Bull Arena. His 0.63 goals per 90 total puts him comfortably second on this list.

Kylian Mbappé seamlessly settled into life with PSG. He may have scored 0.36 fewer goals per 90 than he did while at Monaco but still averaged a goal every other game while considerably upping his xG90 (0.57 up from 0.41) proving his form is sustainable with the Ligue  1 champions.

Cengiz Ünder was bought to replace Salah at Roma and he's done well during his debut season with the Serie A side, averaging a goal every other game.

Elsewhere in Italy, Patrick Cutrone's emergence has been one of the biggest shocks across Europe. His performances meant AC Milan benched summer signings André Silva and Nikola Kalanić. The 20-year-old repaid their faith by averaging an impressive 0.49 goals per 90.

Recently named as a Tottenham Hotspur transfer target, Maxi Gómez has caught the eye for Celta Vigo this season. The Uruguayan signed for the La Liga side last summer and finished his first season in Spain with 13 goals – 0.48 per 90. He's definitely one to watch moving forward.

Similarly, Leon Bailey and Malcom have both been linked with Premier League clubs. The two versatile forwards have starred for their Bayer Leverkusen and Bordeaux respectively this season and have been goal threats from wide areas throughout the campaign. It's no surprise so many English clubs are eager to sign them up.

Mikel Oyarzabal, likened to Barcelona transfer target  Antoine Griezmann and Emmanuel Boateng, who helped himself to a hat-trick against Barcelona recently, both make the top ten. How long before La Liga's big boys come sniffing?

In terms of those missing the cut, reported Liverpool transfer target Ousmane Dembélé is a notable exclusion. He didn't meet the minutes played threshold and he finished the season with 0.3 goals per 90.

Meanwhile, RB Leipzig's on-loan forward Ademola Lookman would have made the list, having scored 0.61 per 90, but he'd only appeared in 728 minutes meaning he was forced to miss out.

Elsewhere, Manchester United star Marcus Rashford had an inconsistent season with José Mourinho favouring Alexis Sánchez. He played 1,807 minutes and finished with 0.34 goals per 90, just missing out on the top 10 list.