Perhaps it was his everyman demeanour and  humility that has meant Shearer’s achievements never really get the full credit they deserve. The greatest goal-scorer of the Premier League era didn’t quite jive with the division’s desire to market itself as the height of footballing glamour; as the destination for the flamboyant and bombastic stars of the world game.

As far as Shearer was concerned, there were no raised collars, no sleek haircuts; no brightly coloured boots or fancy tricks.

He felt no need to market himself or create a personal brand. As he said upon joining Newcastle United in 1996: “If money comes my way, that’s fine, I’ll deal with that when it comes along. It certainly won’t change me. After all, I’m only a sheet metal-worker’s son from Newcastle.”

Shearer’s only true currency was goals, and in that respect he was the richest man in England.

Although more than a decade has passed since his retirement, no player has yet come close to equalling the former Wayne Rooney is closest, but still more than 62 goals behind.

To illustrate Shearer’s incredible strike rate, Rooney has played 23 games more than the Magpies' legend. If the current England captain manages to score a goal every other game from here on in, he will have racked up a career total of 588 Premier League appearances by the time he matches Shearer’s record.

In perhaps a slightly more realistic scenario, if Tottenham Hotspur hotshot Harry Kane can maintain his current rate of scoring, and providing he stays injury free for most of his career, the 23-year-old will likely be celebrating his 32nd birthday before he celebrates taking Shearer’s Premier League record.

“It’s a lot of goals and I’m still a long way off.” Kane told Sky Sports when asked about the record in March last year. “But Shearer was an idol of mine growing up. I don’t like looking too far ahead because you never know what can happen. But is it good to aim for? Definitely. They’re the goals you dream of.”

What’s more, as a youngster at Southampton, Shearer had already racked up 23 league goals before the Premier League came into existence in 1992.

As a teenager, Shearer represented the famous Wallsend Boys' Club, which has produced some of the finest players to emerge from the North East of England, including Peter Beardsley, Steve Bruce and Michael Carrick. While playing for Wallsend, the young Shearer was spotted by Southampton, and he would travel down to the South Coast to train with the Saints on school holidays.

As it became increasingly apparent that this talented young player was destined for a career as a footballer at the highest level, Shearer had trials with Newcastle United, Manchester City and West Bromwich Albion, but it was Southampton who acted quickest and signed him to a youth contract in 1986.

Shearer made his debut for Southampton, coming off the bench against Chelsea in a Division One clash, in March 1988. In his second appearance – his first start and maiden outing at the Dell – he was already breaking records. The game was against Arsenal and the striker netted a hat-trick to help his side win 4-2. In doing so the prodigious forward became the youngest man to score a top flight treble – aged 17 years and 240 days – beating the record set by Jimmy Greaves in 1958.

Shearer was eased into regular first-team action over the next few years, but by 1991 he had become the focal point of the Saints' attack and was voted the club’s Player of the Year. That summer, he starred for the England under-21s at the Toulon Tournament in France, bagging seven goals in four games.

The following season Shearer made his full international debut, scoring in a 2-0 win over France in 1992. Manchester United and Liverpool both tried to sign the Southampton marksman, but it was ultimately Blackburn Rovers who secured his signature, forking out a British-record fee of £3.6million. 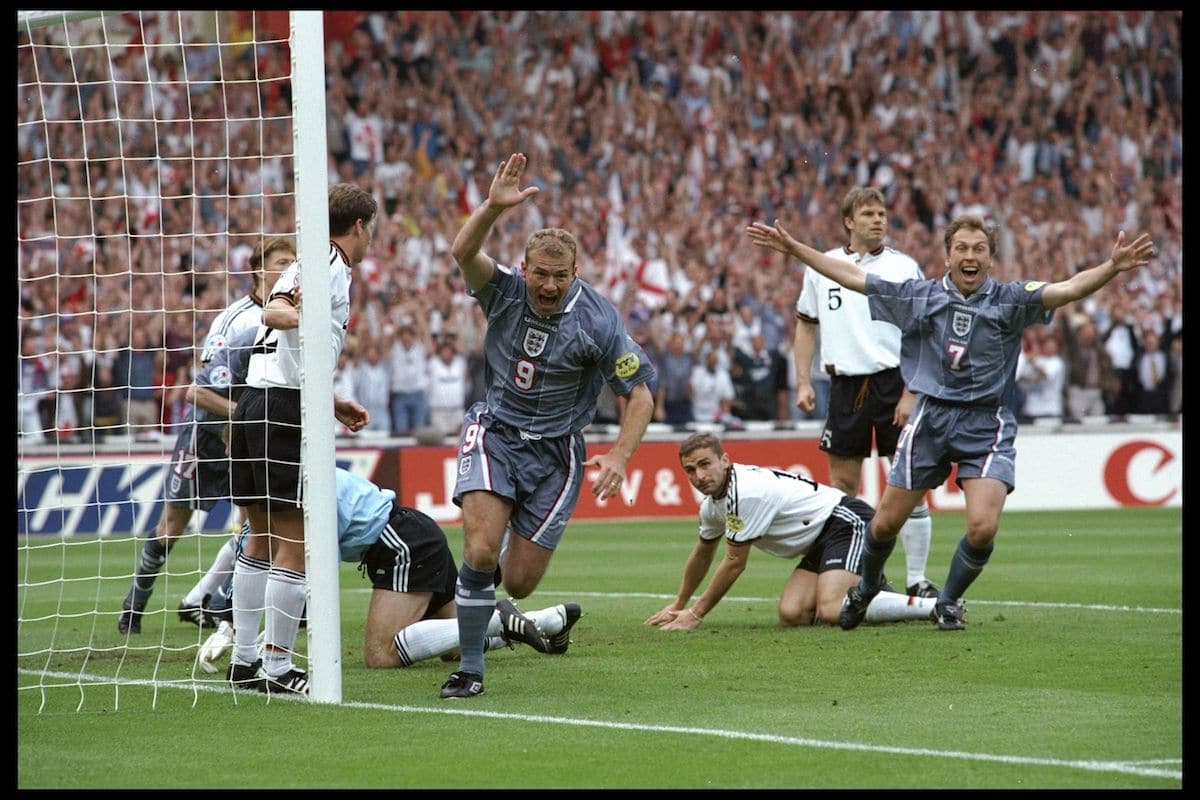 Shearer’s first season at Ewood Park was blighted by injury, as a torn ankle ligament restricted his playing time. But 31 goals from 40 games as Rovers finished runners-up in the Premier League saw Shearer named the FWA Footballer of the Year for the 1993/94 campaign.

The 1994/95 season was a special one for Shearer, as it was the campaign in which he won the only major trophy of his career. Partnered in the famous “SAS” attack with former Norwich City striker Chris Sutton, Rovers' No.9 rattled in 34 goals in 42 Premier League games to fire Blackburn to the title, pipping reigning champions Manchester United to the trophy. Shearer’s efforts were recognised by his fellow professionals, who named him their PFA Player of the Year.

Although Blackburn were unable to hang on to their title in 1996, Shearer broke the 30-league-goal barrier for the third successive season and, at the zenith of his powers, he would go on to have the summer of his life.

The 1996 European Championships were to be held on home soil and anticipation throughout England was at a level unseen since the glorious World Cup, 30 years earlier. Terry Venables was in charge of an England team which many felt were capable of genuinely challenging for the Henri Delaunay trophy. But, despite his impeccable club form, there were question marks over Shearer’s place in the team.

With a barren run for the Three Lions which stretched back 12 games over two years, there were plenty of people calling for Shearer to be dropped for the tournament. But Venables assured the striker that he counted on him, and the manager’s faith was repaid.

Shearer finished as the tournament’s top scorer with six goals – including a double against the Netherlands – as England came within a penalty shootout of reaching the final. The month-long Euro 96 campaign may have ended in disappointment, with England again eliminated on penalties by Germany, just as they had been at the 1990 World Cup, but the nation was united in support of Venables’ men, and no player came away with higher stock than Shearer.

Manchester United again tried to sign him that summer but, with a world-record bid of £15million, Newcastle brought Shearer home to St. James’ Park, where he always felt he’d belonged.

As a lifelong Magpies supporter, a young Shearer used to stand on the Gallowgate End to watch his heroes, where his father would tell him tales of the goal-scoring feats of the great Jackie Milburn.

Just 18 months earlier, Newcastle fans had gathered on the steps outside St. James’ Park to protest the sale of star striker Andy Cole to Manchester United; now they swarmed to the same spot to welcome their new hero.

And Shearer didn’t disappoint: in his first season he once again finished as the Premier League’s highest scorer with 25 goals, and was again named the PFA Player of the Year, although Kevin Keegan’s men fell just short in the title race.

In ten years with Newcastle, Shearer was unable to help reward the fans with the silverware for which they continue to yearn, finishing runners-up in the league and twice in the FA Cup. But he brought the Magpies faithful more joy than they could ever have wished for when he joined the club.

With 206 goals in 405 appearances on Tyneside, Shearer shattered the long-standing scoring record of his father’s hero, Milburn. He was the local hero; the working-class kid living every Geordie’s dream of pulling on the famous black and white stripes and scoring goal after spectacular goal.

Bullet headers, rocket volleys, thunderous penalties and curling free-kicks: Shearer could do it all – he was the ultimate all-round striker.

From the mid-1990s to the early-2000s, there was no better and no more complete goal-scorer than Alan Shearer – a North East legend and a Premier League icon.