The 2-0 win over Swansea City in the Carabao Cup on Wednesday provided a neat buffer for Huddersfield Town last weekend and the visit of Tottenham Hotspur to Old Trafford on Saturday afternoon.

But the victory in South Wales, by virtue of a Jesse Lingard brace, has done little to disguise the cracks creeping up the walls of the title challenge José Mourinho is building this season. The Red Devils were blunt and overly-cautious against Liverpool a fortnight ago and lack lacked incision at John Smith's Stadium.

It is vital that United attain a favourable result against Spurs. Mauricio Pochettino's men battered Liverpool 4-1 at Wembley Stadium last weekend to eradicate the gap between themselves and their upcoming hosts.

Both are vying to keep pace with Manchester City at the top of the Premier League, and three points either way on Saturday will be a huge blow struck by the victors.

With criticism of his approach at Anfield still ringing in his ears, a less dogmatic and single-minded coach than Mourinho might consider bending to pressure from fans and media alike by opting for a more expansive style against Spurs – fighting fire with fire – but he won't and, in truth, he shouldn't.

On the evidence of the season so far, it would be fair to suggest that, despite being the home side on Saturday, United would be best served employing the kind of tactics ordinarily associated with teams playing away.

This is not to suggest that Mourinho should once again park the proverbial bus in pursuit of a goalless point – his side will need sharpened teeth if they are to succeed against the North Londoners.

But rather, with Tottenham's propensity for holding a hight defensive line, and a growing suspicion over their ability to cope with set pieces as readily as they defend most scenarios, ceding the initiative and striking on the counter could present United with their best path to three points.

Liverpool performed badly at Wembley last week, but their goal, scored by Mohamed Salah and crafted by the quick thinking of Jordan Henderson, demonstrated that Jürgen Klopp had perhaps spotted a chink in Tottenham's armour. 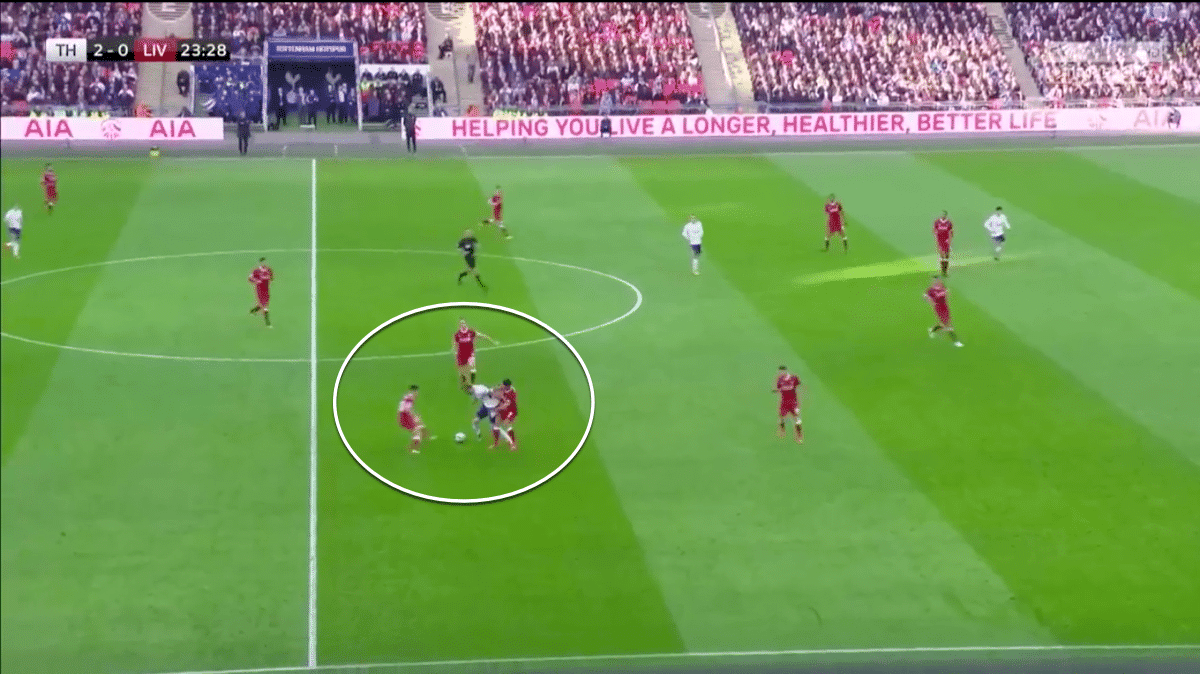 Above, we see Harry Kane – an injury doubt for the Old Trafford showdown – hunted down in midfield by Liverpool's pressing pack, his passing lanes cut off and afforded no time to re-evaluate. 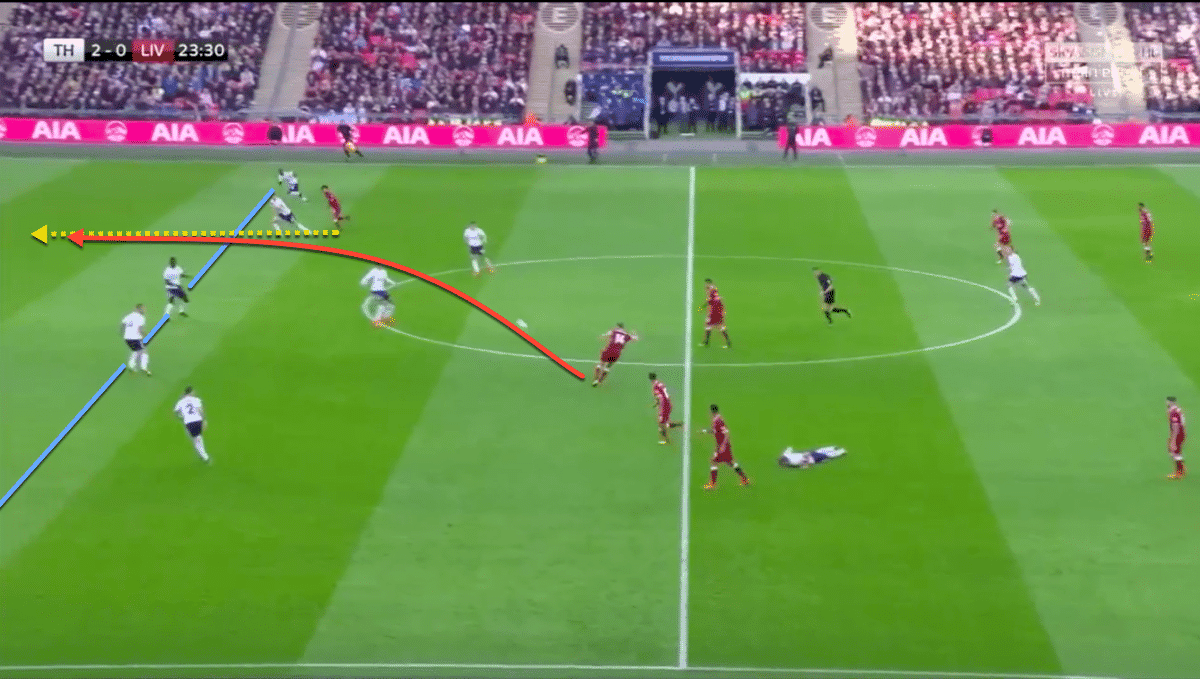 Henderson takes the ball and immediately looks to expose the space in behind the high Spurs defensive line by picking out Salah, utilising the Egyptian's searing pace. 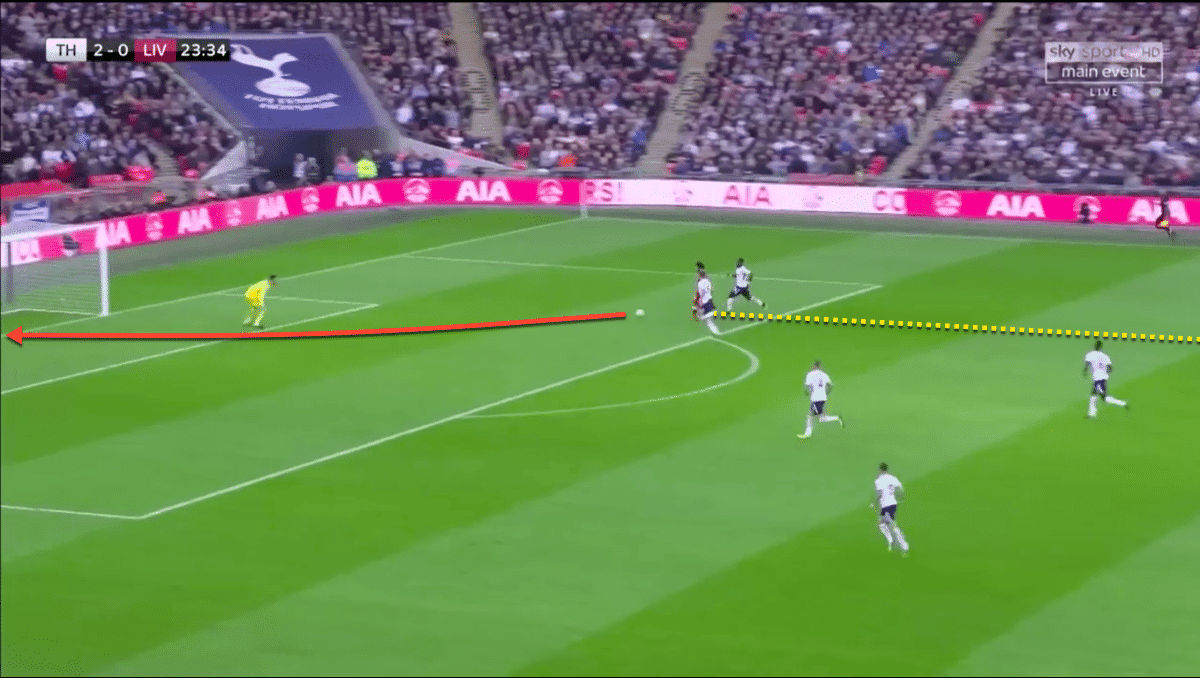 The pass is perfect and Salah is too quick to catch. The former Chelsea and Roma winger finds the corner of Hugo Lloris' net.

Pochettino had switched right wing-back Serge Aurier over to the left side for the game, with the specific intention of counteracting Salah's threat by matching his raw speed with the Ivorian's.

Straight-line speed is one thing, but, caught square by the rapid turnover, Aurier and the rest of the Tottenham backline had first to turn and face their own goal before chasing Salah down, costing the temporary Wembley residents the milliseconds that matter in such situations. 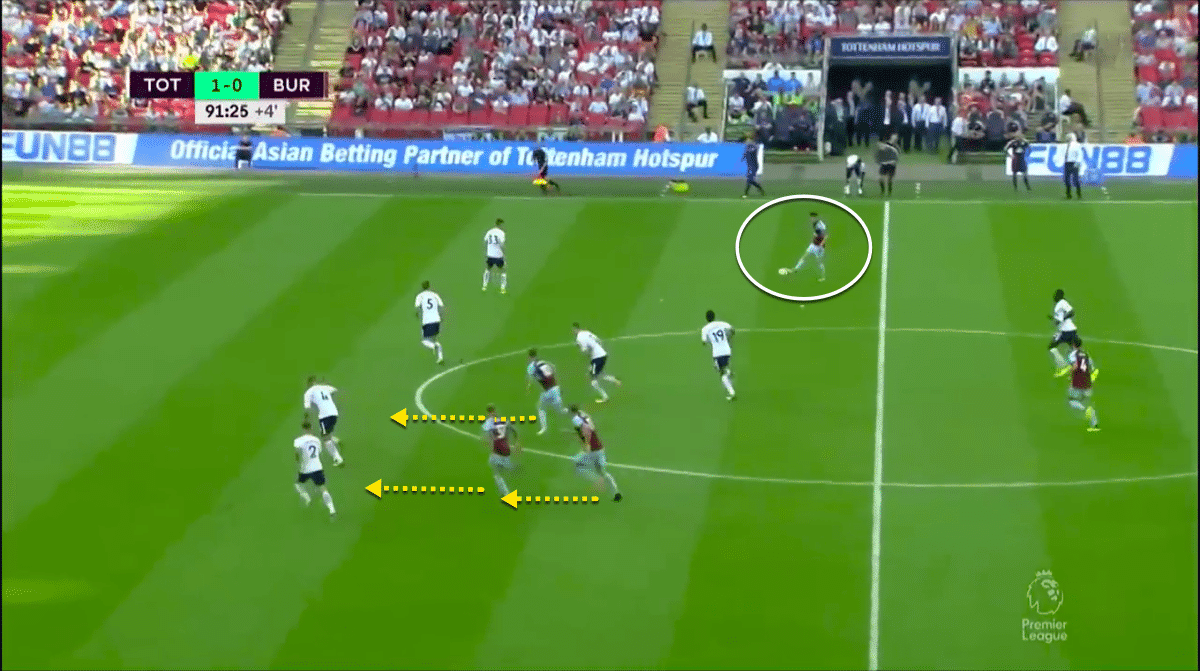 It was a similar story when Spurs hosted Burnley earlier in the season, too. As we see above, the Clarets gain possession in midfield and instantly send three runners into the space behind Tottenham's defence. 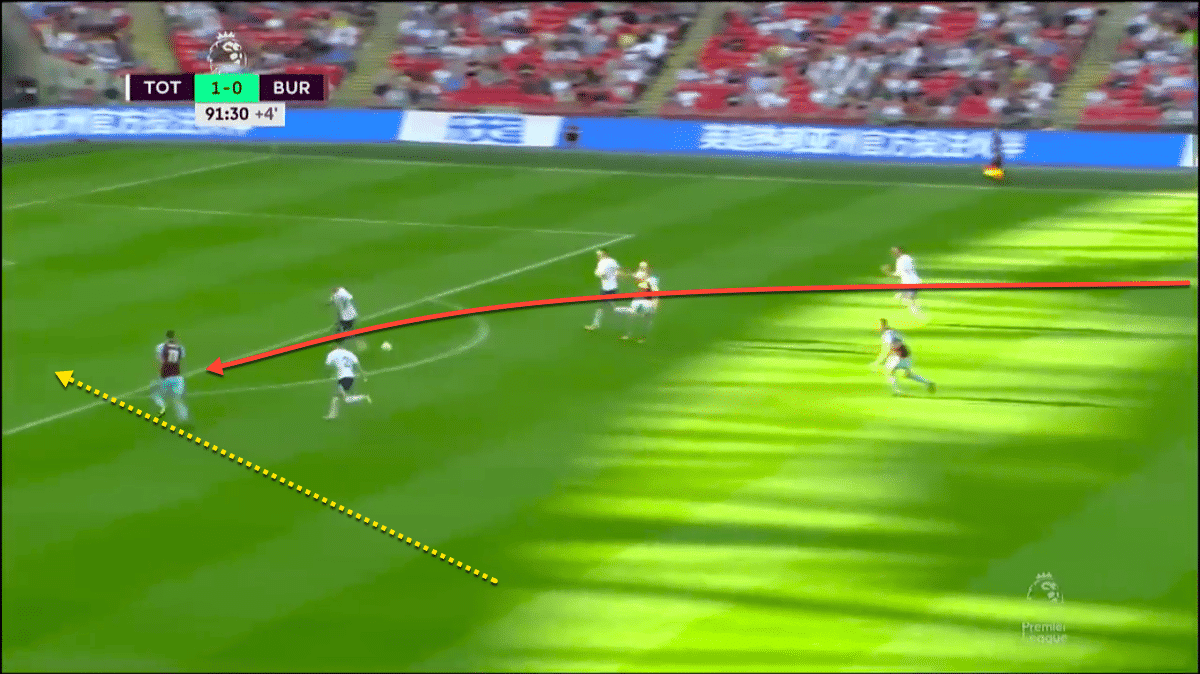 One simple ball is all it takes to free the spare man, attacking the half-space between the right wing-back and right-sided centre-back, taking advantage of the fact there is a natural opening there due to the wing-back's starting position being slightly higher. 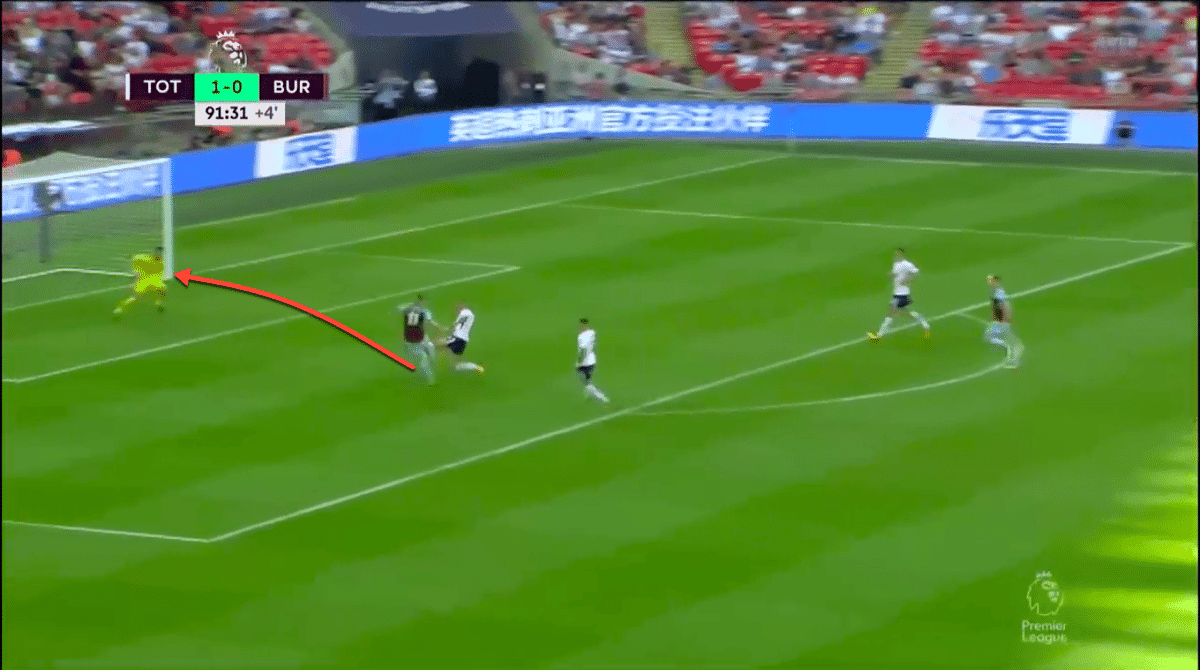 Through on goal, Chris Wood expertly dispatches a first-time finish into the bottom corner to earn an unexpected point for Sean Dyche's men.

In order to replicate this tactic, Mourinho will need to stock his frontline with pace. and Anthony Martial have started all season on the left, but the Portuguese coach might want to consider fielding another speedster in place of Juan Mata on the right, too.

Midfielders with the ability to not only press to win possession, but also transition quickly with accurate long passes will be crucial to this strategy.

In that sense, Paul Pogba, still recovering from a hamstring injury, will be missed dearly. But Nemanja Matić, although a defensive midfielder, has an excellent passing range, while Ander Herrera showed himself capable of executing such tasks regularly last season.

Tottenham's defence is arguably the best in the Premier League, and manufacturing situations where they become vulnerable is extremely difficult to do; scenarios such as those seen above are relatively rare, but they represent United's best route to hurting Pochettino's band of well-drilled technicians.

Likewise set pieces. Spurs are hardly deficient defending corners and free-kicks from wide, but they have shown signs of a tendency to switch off at times.

They have only conceded six league goals so far in 2017/18, two of which have come directly from set pieces – not a great amount, but still a third of their total concessions.

Their Carabao Cup exit at the hands of West Ham United on Wednesday night also highlighted this area as one of potential weakness for Spurs. The Hammers rallied back from 2-0 down to win 3-2.

Their first goal, finished by André Ayew, resulted from Tottenham's inability to properly clear their lines from a corner kick, and the winner was a near-post Angelo Ogbonna header directly from a corner.

United lead the league in goals from set pieces this season (six), as Mourinho, over the course of three transfer windows, has stocked his squad with players over 6ft tall.

With the primary aim of utilising swift counters, fielding fast players on the flanks, who look to take on their markers with the ball at their feet, will also be conducive to picking up free-kicks in wide areas and corners.

Mourinho's instinct in big games has always been to prioritise defence, while United fans cry out for their side to attack with abandon. The key to three points against Spurs could be to walk the line between the two.