Arsenal were unable to overturn a 5-1 defeat to Bayern Munich at the Allianz Arena in the second leg of their Champions League second round clash at the Emirates Stadium this week, but Barcelona made history at the Camp Nou.

Luis Enrique's men, who lost 4-0 away to Paris Saint-Germain in the Parc des Princes, became the first side in Champions League history to overturn such a deficit with a stunning 6-1 win.

Barça's turnaround may be the most dramatic we've seen in Europe's premier club competition, but it wasn't the first time a team had overcome the odds after a first-leg setback. 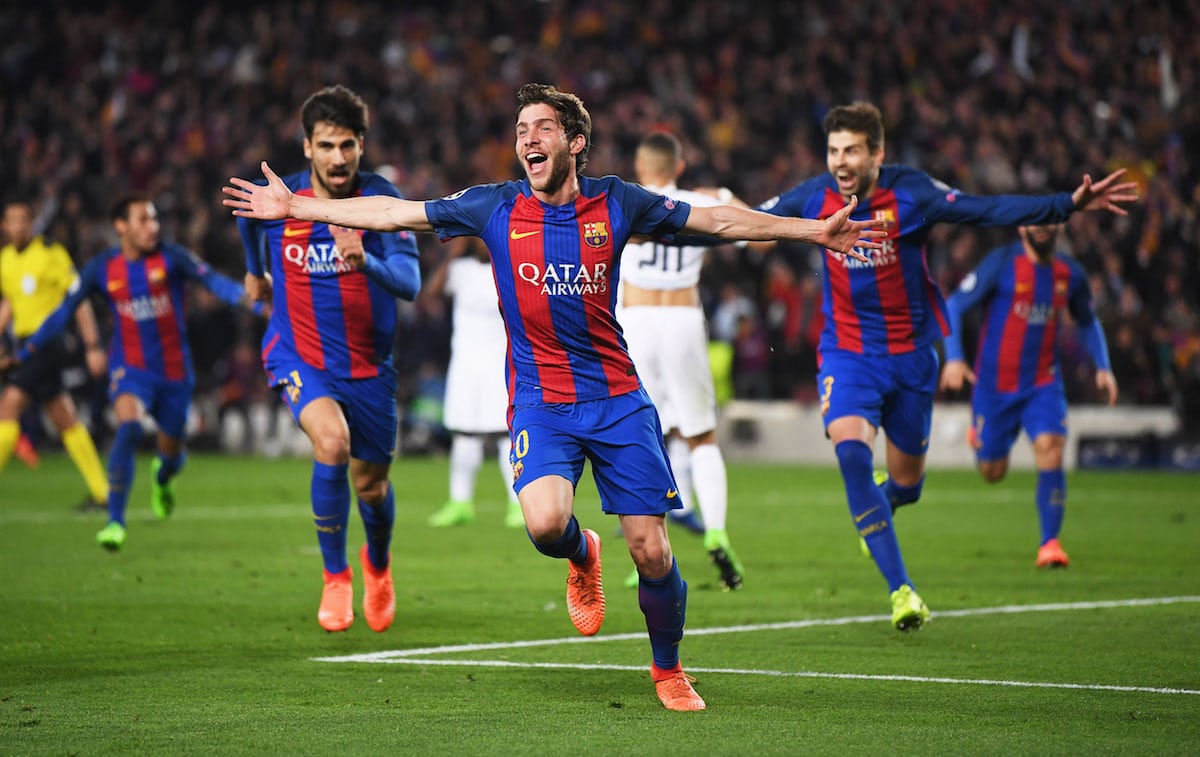 “While there is a 1 percent chance, we have 99 percent faith.”

After 4-0 humbling at the hands of French champions Paris Saint-Germain in the first leg of their last 16 tie, Barcelona forward Neymar took to Instagram to ensure fans that he and his team-mates were not counting themselves out yet.

Were it any other team in world football, there would have been no hope at all. But a side containing such talents as Luis Suárez, Lionel Messi, Andrés Initesta and the aforementioned Brazilian can never be written off.

An early Suárez header helped Barça on their way to a 2-0 half-time lead — they were on course to get the four goals they needed to force extra-time. Five minutes into the second period the miracle was well and truly on, as Messi fired a penalty beyond Kevin Trapp to make it 3-0.

Then, with little over an hour played, all hope seemed to be extinguished when Edinson Cavani fired in a crucial away goal. Having failed to notch one of their own at the Parc des Princes three weeks earlier, the Blaugrana would now need to score six on the night to ensure progression.

Barça kept plugging away, with Neymar in particular carrying the fight to the Parisians. However, when the former Santos man swung a stunning 25-yard free-kick into the top corner in the 88th minute, it seemed to little too late.

But, less than two minutes later when Suárez made the most of minimal contact in the penalty area from Marquinhos, a spot kick gave the 90,000-plus Barça fans inside the Camp Nou reason to believe. Neymar converted but the 90 minutes were already up.

There were to be five minutes of stoppage time, 60 seconds of which had already elapsed by the time PSG restarted the game. Barça huffed and puffed, and goalkeeper Marc-Andre ter Steven spent much of the closing minutes in and around the opposition's penalty area.

With less than a minute to go, Neymar cut inside from the right and chipped a hopeful ball into the box. Time seemed to freeze for everyone inside the Catalan football cathedral. Everyone except one man.

Sergi Roberto, a graduate of Barcelona's famed La Masia academy, kept moving, following the flight of the ball to the edge of the six-yard box.

It was a desperate moment which required a desperate, stretching lunge. Connecting with the big toe of his left foot, Roberto sent the ball looping agonisingly goalwards. Trapp was beaten, Barça had done it.

Chelsea saw off the likes of AC Milan and Marseille to reach the Champions League quarter-finals in 2000, though their chances of further progress seemed slim when they were drawn against La Liga giants Barcelona. While they had a strong team at the time, the London club were not yet under the ownership of Roman Abramovich and thus were without the Russian’s millions and the world class talent his wealth bought.

However, three goals in an eight-minute spell at Stamford Bridge from Gianfranco Zola and Tore Andre Flo ensured a 3-1 lead to take to the Camp Nou. All Gianluca Vialli’s side had to do was defend their advantage, but they would be unable to do so against a hailstorm of attacking firepower.

Chelsea held out for 24 minutes away from home before a Rivaldo free-kick deflected in. And Portuguese maestro Luís Figo doubled Barcelona’s advantage just before half-time, passing into the net after a mazy run discombobulated the away side’s defence.

Flo capitalised on a giveaway by Barcelona goalkeeper Ruud Hesp, curling in with his left foot to give the English side a crucial away goal. However, with seven minutes left in normal time Dani García headed home to break Chelsea hearts.

Two minutes later, Rivaldo failed to convert from the penalty spot to seal victory for the illustrious Catalan club, but he would rectify that error after nine minutes of extra-time. Five minutes later, Patrick Kluivert sent Chelsea out as Barcelona won 5-1 on the night.

A 3-1 defeat away to Napoli in the first leg of a Champions League second round tie proved to be Andre Villas-Boas’ last European match in charge of Chelsea. The Portuguese was upbeat about his team’s chances of turning around the deficit, but he wouldn’t be in the dugout to witness a comeback — within two weeks he was dismissed by the club and replaced by Roberto Di Matteo.

The imperious Didier Drogba led the fightback at Stamford Bridge, stooping to head a Ramires cross beyond Napoli shot-stopper Morgan De Sanctis on 28 minutes. And, early in the second half, another header gave Chelsea the lead via the away goals rule, with John Terry finishing from a Frank Lampard corner. 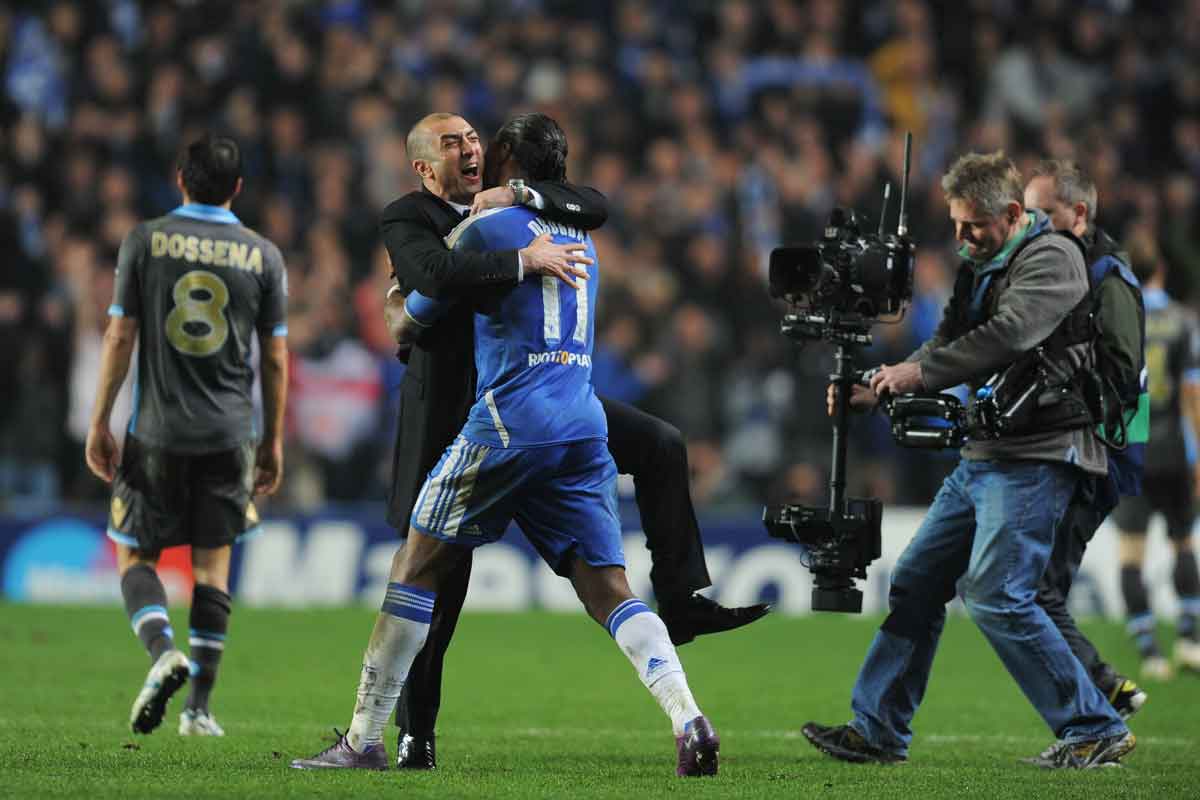 Gokhan Inler cancelled out Chelsea’s away goal eight minutes later, but the Italian outfit simply couldn’t withstand their hosts’ onslaught. Once again a cross and a header caused havoc for Napoli, with a penalty given away for handball. Lampard stepped up to convert and send the match into extra time.

On 105 minutes, Serbian defender Branislav Ivanovic became the unlikeliest of heroes, firing in from inside the penalty box to make the score 4-1 and secure a 5-4 aggregate victory for Chelsea on a night Di Matteo stated would “probably go down in club history.”

At the height of Carlo Ancelotti’s reign, AC Milan were almost unplayable. And Spanish side Deportivo La Coruña felt the full extent of this in their Champions League quarter-final encounter in 2004. After taking the lead in the first leg, Javier Irureta’s side were overwhelmed by the magical creativity of Kaká, who scored twice as Milan won 4-1.

With a three-goal deficit against one of Europe’s finest going into the second leg, few had hope for Deportivo. However, Irureta refused to give up on his team. “This is of course a very complex, difficult and challenging task,” he admitted. “But in football, miracles often happen, things you might not rationally expect.”

And the irrational did in fact become reality in the second leg at the Riazor. 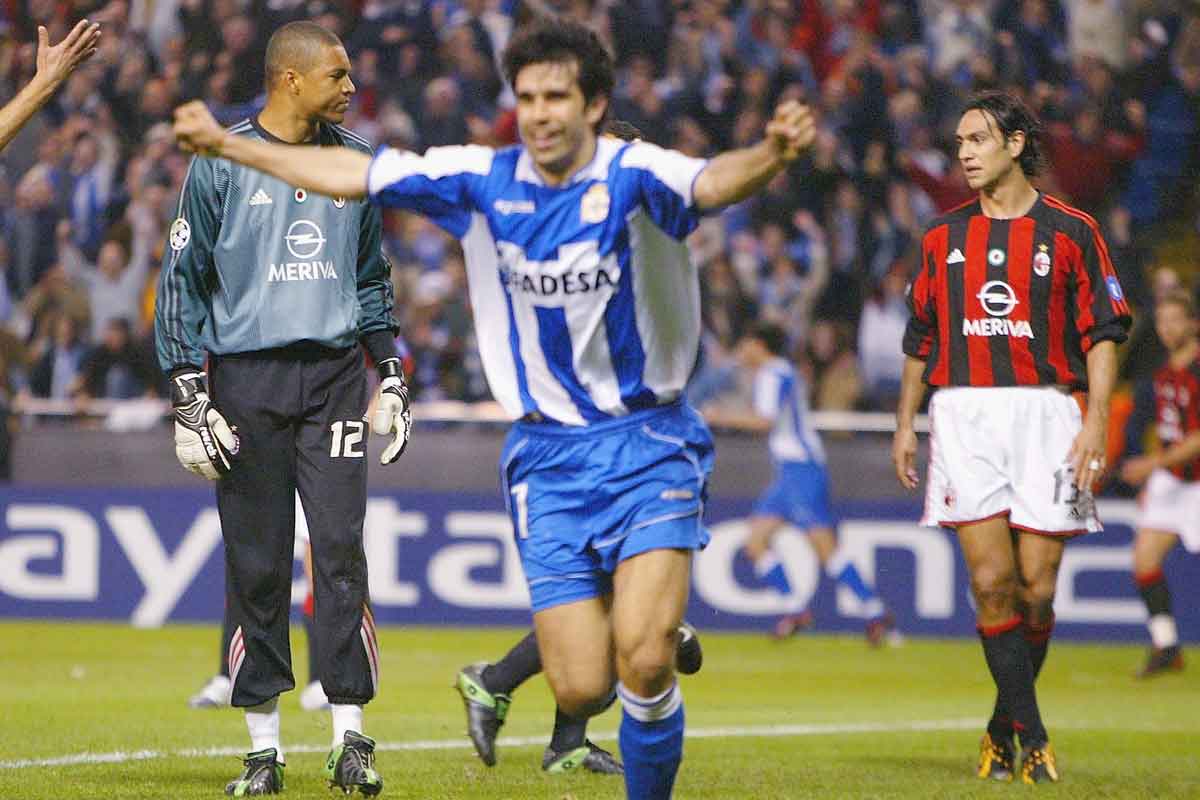 Walter Pandiani struck after just five minutes to lift the home crowd, and half-an-hour later mercurial playmaker Juan Carlos Valerón rose to head home after Milan goalkeeper Dida misjudged a cross. The tie was wide open once again and, just before half-time, Deportivo seized on their momentum to go ahead on away goals, with Albert Luque taking advantage of some lax defending to rifle into the roof of the net.

Still, one away goal was all Ancelotti’s Milan needed to regain their aggregate lead. But on 76 minutes that consolation was blown away by a deflected Fran strike. 4-0 to Deportivo, and the Galician outfit had knocked out their esteemed opposition.

Few gave Monaco a chance of progression to the Champions League semi-finals in 2004 after losing 4-2 to Real Madrid at the Santiago Bernabéu. Having blown a one-goal led in that first leg, Didier Deschamps’ side conceded four in 40 minutes to all but seal their fate. Only an 83rd-minute Fernando Morientes strike kept them vaguely in the tie.

When asked if he felt his team were out ahead of the return leg at the Stade Louis II, Deschamps rebutted: “If I thought that, I’d be better off staying home.” He didn’t, and a comeback of seismic proportions took place. 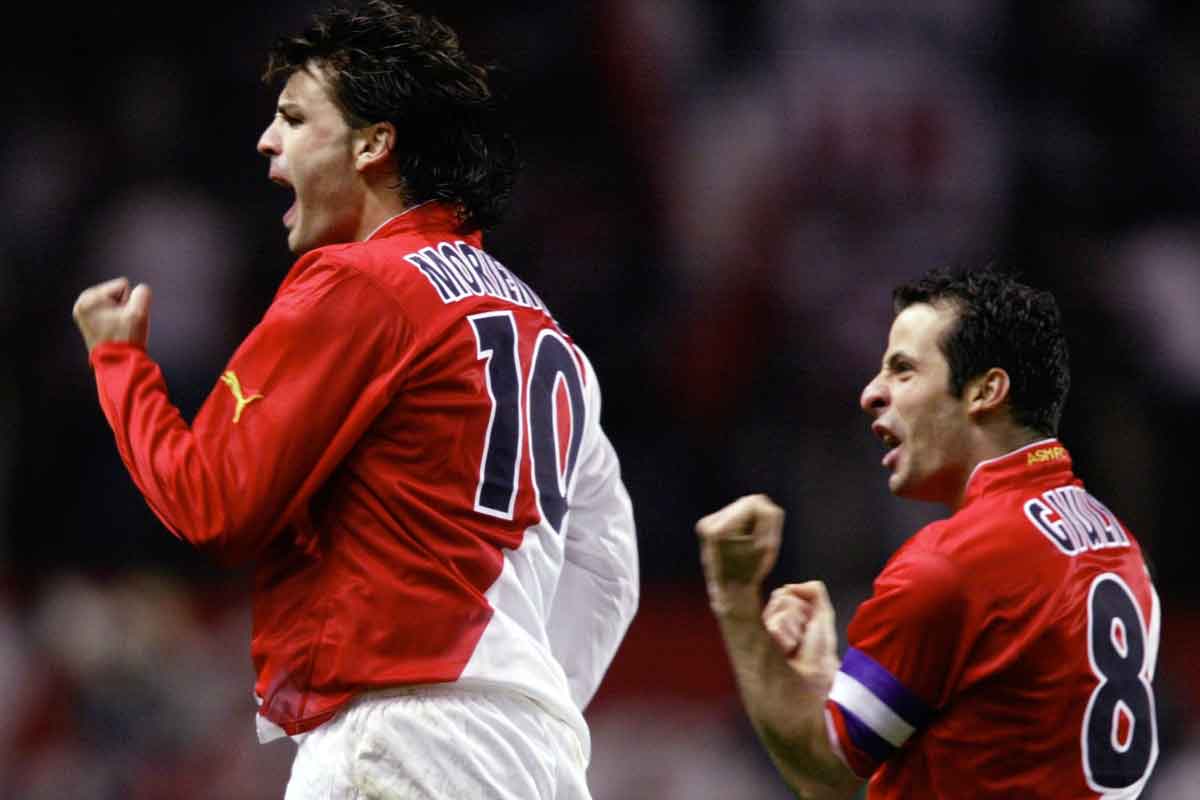 A Raúl strike on 36 minutes gave Real Madrid an away goal and a 5-2 aggregate lead, seemingly killing off Monaco’s last vestiges of optimism. However, Ludovic Giuly – who went on to play for Barcelona – volleyed home in first half injury time to equalise on the night and pull his side back into the contest.

Three minutes into the second half, Morientes, who ironically was on loan from Real Madrid, leapt brilliantly to head in a second for Monaco. And, less than 20 minutes later, Giuly was at it again, improvising superbly to finish a driven Hugo Ibarra cross with a beautiful back-heel.

At 3-1, Deschamps’ Monaco had the advantage thanks to their two away goals, and they managed to hold on to this advantage until the final whistle, securing their place in the last four. 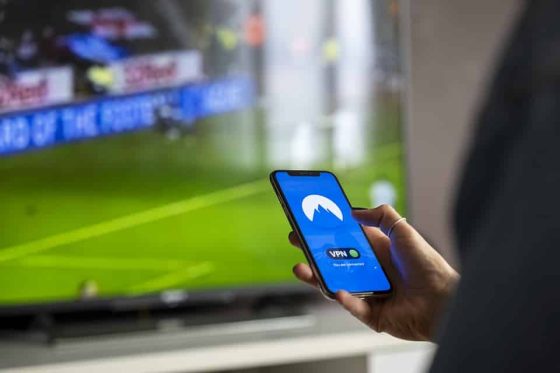 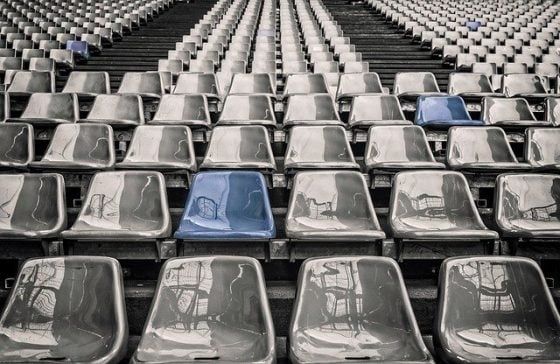 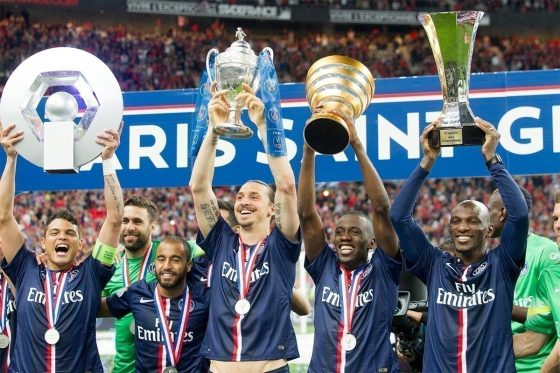 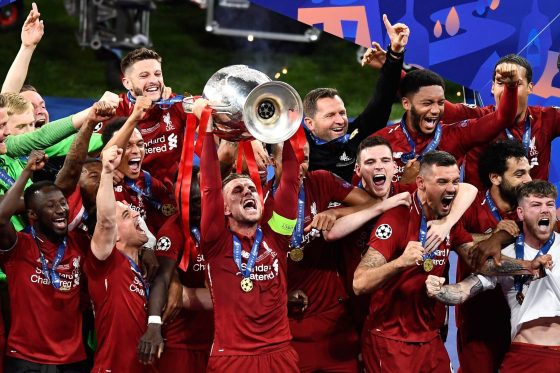