John Stones has always stood out as a player, though not always for the right reasons. During his three seasons in the Everton first team, the ball playing centre-half gained notoriety for his composure on the ball, although, this occasionally blended with poor decision-making and attempted ‘Cruyff turns' in his own penalty box.

At a time when the club were underperforming and leaking goals at a high rate – last season only five Premier League sides had a worse final 2015/16 tally than the Toffees’ 55 concessions – fans became frustrated with his seemingly nonchalant approach to defending. Stones would react, telling them to calm down.

Yet, while at times his style led to groans from his own supporters, there was always an understanding that Stones is, if not quite Franz Beckenbauer, undoubtedly unique among the current crop of English centre-backs.

The Three Lions' defensive options have long been ridiculed for their perceived technical deficiencies when compared to those of other nations but Stones, with his unerring desire and to bring the ball out from the back, stood out from the crowd.

On 9 August, the former Barnsley youngster put pen to paper on a six-year contract with Manchester City. The deal, which involved a £47.5 million transfer fee, was seen as a risk by many pundits. For a club with grand ambitions of challenging European football’s established hierarchy, a 22-year-old central defender with defending problems was not many people’s idea of a sure thing. But with Pep Guardiola as his new manager, Stones' switch made perfect sense. 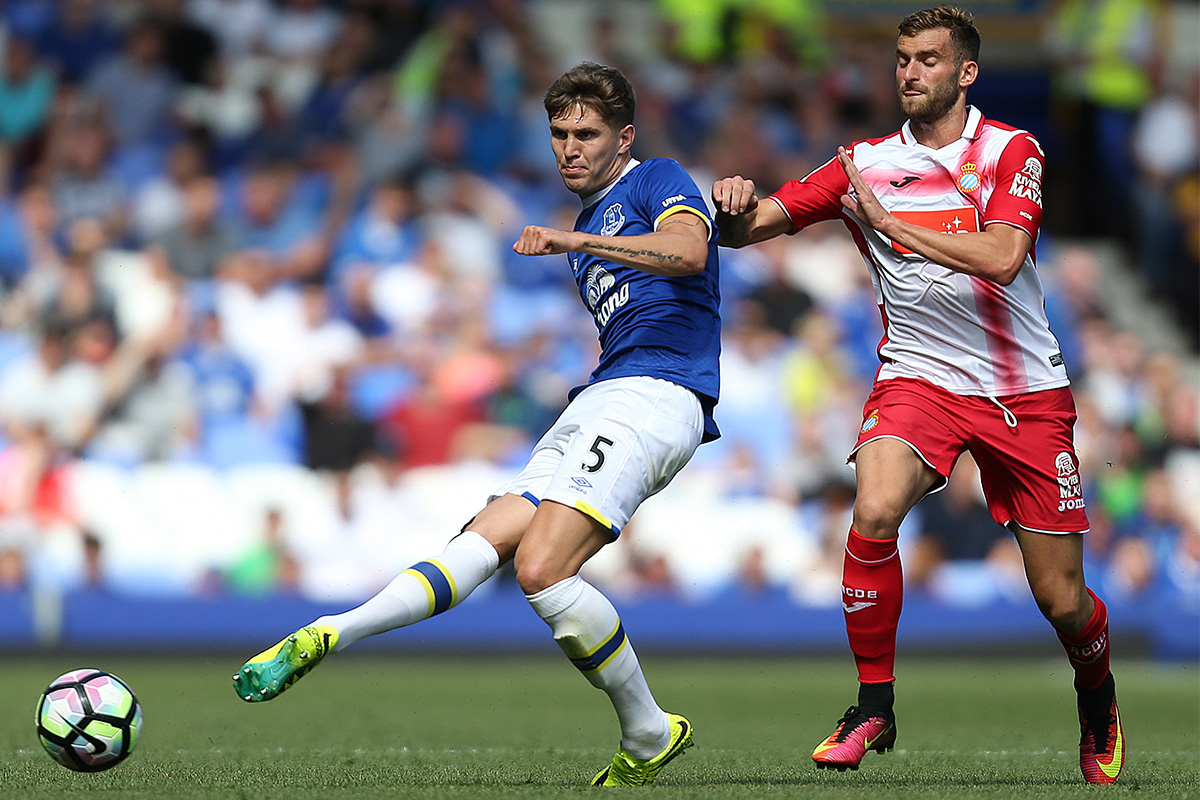 Much of the defensive frailty evident in his game in an Everton shirt were the result of his working with former coach Roberto Martinez, who did not appear to pride himself on his team’s structure. Defensively, the Spaniard’s side were seen as disorganised, predictable and vulnerable. Those were not the conditions under which any defender would thrive, and certainly not for an inexperienced youngster who had only started his first Premier League match on 1 January 2014.

The set-up is much more suitable at Guardiola’s City revolution, however. Stones has played in a number of different defensive positions throughout his short career thus far, showing a good degree of flexibility. He has also proven himself to be a technically assured player, comfortable with the ball at his feet and with a wide passing range.

The football played by Guardiola teams has regularly been associated with the ball; they do, after all, tend to have so much possession of it. However, the notion that his teams seek simply to retain the ball is a simplistic, perhaps lazy, one.

Guardiola wants his teams to use the ball to win, rather than simply play to have the ball. The tactics, which tie into his concept of ‘Positional Play', were described by Marti Perarnau in an interview with Spielverlagerung’s Adin Osmanbasic as follows: “Positional Play does not consist of passing the ball horizontally, but something much more difficult: it consists of generating superiorities behind each line of pressure. It can be done more or less quickly, more or less vertically, more or less grouped, but the only thing that should be maintained at all times is the pursuit of superiority. Or to put it another way: create free men between the lines. It is essential to generate superiorities behind each line of the opponent pressure. The team that interpreted Positional Play in [the] most extraordinary way was the Barcelona of Pep Guardiola.”

Implementing this style of play requires players with specific technical and tactical characteristics. Defenders playing within a Guardiola team have always had to be able to receive the ball under pressure, or even take the ball into a situation in which pressure exists, in order to create the possibilities that Positional Play offers. 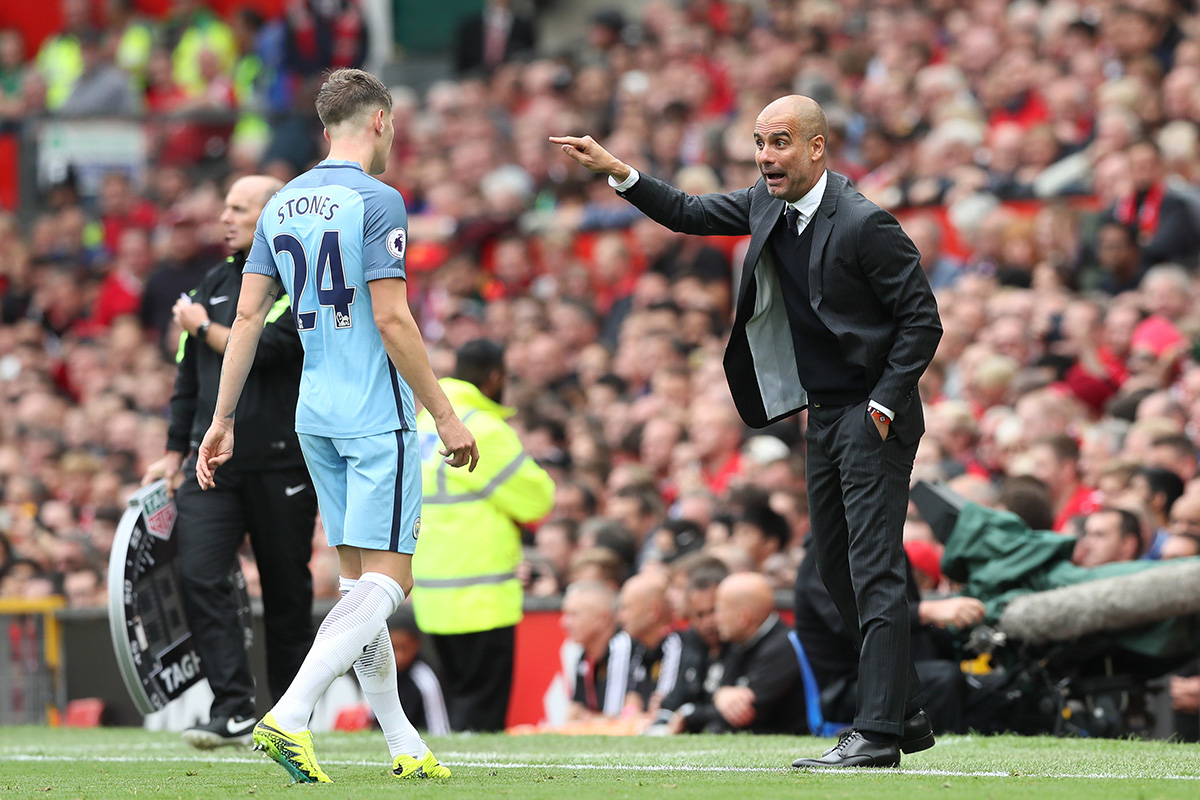 This, naturally, means that any central defender to sign for Manchester City under the Catalan’s auspices will need good ball control, intelligence and willingness to play in tight spaces. Stones fits the bill in these aspects and has proven so with strong performances since signing for the club. He has played in every single one of the club’s Premier League fixtures thus far this season without looking out of place.

While playing nominally as a centre-back, his positioning and movements have not followed the traditional script. He has regularly been seen pushing beyond the defensive line into midfield, operating behind the opponent’s first line of pressure, as opposed to in front of it, offering a pass to deeper team-mates rather than instigating moves as the first receiver from the goalkeeper. From time to time – with Guardiola's full-backs encouraged to drift infield – Stones has also taken up a much wider position, enabling a diagonal passing option to the keeper when playing out.

But, more than simply finding his man, the intelligence of Stones’ passes are pivotal to the Guardiola style. While disrupting high-pressing opponents, Stones’ ball-playing will likely prove most valuable against more passive defences, with sharper vertical passes needed to penetrate teams who choose to sit back, remain compact and allow Manchester City to progress the ball forward.

Another option in such circumstances would be for Stones to drive forward with the ball and attack the passive defence, forcing a reluctant press through his advancement up the pitch. By beating or attracting pressure, he can then generate free men further forward.

Watching a centre-back pass, move and dribble with such freedom and competence is refreshing in a league that has generally been devoid of such progressive football. It is exciting, risky and new, but ultimately it needs a combination of intelligence and precision to succeed. Stones has always had the latter, and now he is gaining the former.

Football, on and off the pitch, is so rarely about individuals. It is about synergies, or a lack of them. In moving to Manchester City, Stones found the coach he had been looking for, and Guardiola has the centre-back his footballing philosophy requires. Together, they can do beautiful things.