In a transfer window of big-money buys, the transfer of Gonzalo Higuain from Napoli to Juventus was one of the most talked about deals.

The £77 million move had all the ingredients of a summer blockbuster: a concerted period of speculation, a large dose of controversy and an exorbitant amount of money.

For many fans, particularly those of a Neapolitan persuasion, it represented all that is wrong with modern football. For others it was par for the course. There was one thing that most agreed on, however, the fee Juventus paid – which made the Argentine the world's third most expensive player at the time – was excessive for a 28-year-old.

While his age suggests he has no more than two or three more seasons of his best football to give, Higuain is undoubtedly one of the finest No.9s in the world today. He scored 107 goals in 190 La Liga outings for Real Madrid and was the club’s top league scorer in 2008/09 and 2009/10, despite competition from the likes of Ruud van Nistelrooy, Raul, Karim Benzema and Cristiano Ronaldo.

Meanwhile, during his three years with Napoli, he found the net an exceptional 71 times in 104 league games. Last season he broke the all-time record for goals scored in a single Serie A season, hitting 36 in 35 appearances to eclipse the record set by Milan's Gunnar Nordahl (35 in 37 matches) in 1949/50.

While, £77m is, of course, an obscene sum for Juventus to fork out on one player, when it to simultaneously weakens one of their biggest rivals and strengthens Massimiliano Allegri's squad with one of the most effective finishers in the world, the fee can be justified in today's market.

However, while the signing will add potency to the Juve front line, there is no guarantee that it will bring success. For that to happen, Higuain will first have to fit in to a completely different system and style of play, something which is by no means a given. 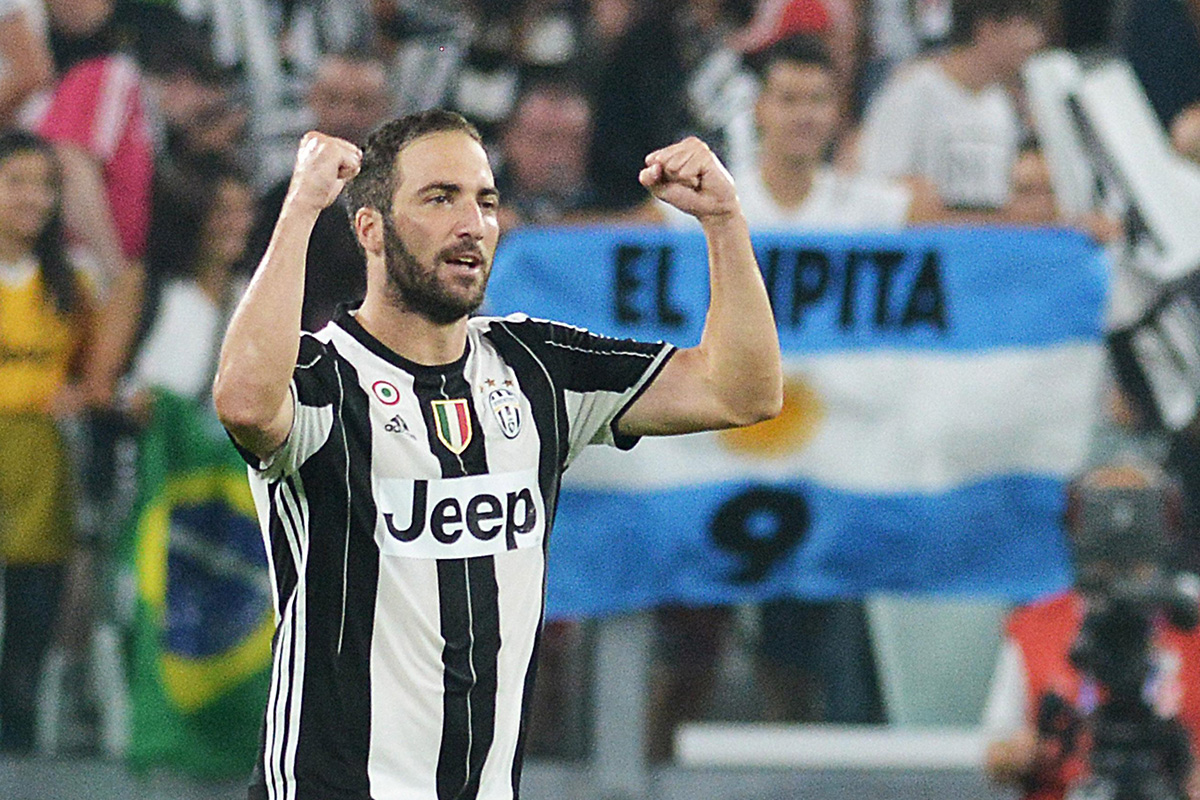 The striker’s first two years with Napoli were spent working under the auspices of Rafa Benitez. The Spaniard, now manager of Newcastle United, was a firm believer in the 4-2-3-1 system. However, the shape was not particularly cohesive, often leaving large gaps between the layers and making Napoli vulnerable to counter-attacks.

The enormous individual talent within the squad – including Higuain as the lone striker – ensured Napoli consistently finished as one of Serie A’s top scorers, however, the overarching lack of structure led to a lack of cohesion and a failure to maximise the quality within the team.

This would change upon the appointment of Maurizio Sarri prior to the 2015/16 season. The 57-year-old, who worked in finance before embarking on his coaching career, brought with him a clear identity that aided Napoli in their quest for a Scudetto and, in turn, helped Higuain to break records.

After a failed experiment with a 4-3-1-2 formation, Sarri implemented a 4-3-3 in which the wingers, Jose Callejon and Neapolitan fans' favourite Lorenzo Insigne, looked to move infield into the half-spaces and combine with Higuain. In this sense, the wide men acted almost as false trequartisti, providing an opportunity for combinations in the final third.

The Argentine hitman thrived in these circumstances, where his physicality and sound first touch allowed him to hold the ball up effectively, play one-twos with his inward-moving team-mates and create chaos around the opposition’s penalty area.

While Higuain came to life predominantly in the final third, exploiting the movements of those around him, he also came deeper on occasion to change the look of Napoli’s attacks. Dropping into a central position in and around the centre circle, he would offer an alternative vertical passing outlet, allowing Napoli to play through the opposition. From this position, several opportunities opened up.

Had his marker followed him deep, there would be space behind to drive into. As such, Higuain, with his back to goal, would look to play first-time horizontal passes into the feet of a runner, usually Marek Hamsik or Allan, who would then be in a position to drive forward with the ball. Alternatively, had his marker not followed him, Higuain would look to turn immediately and drive towards goal himself, committing defenders in dangerous central areas. 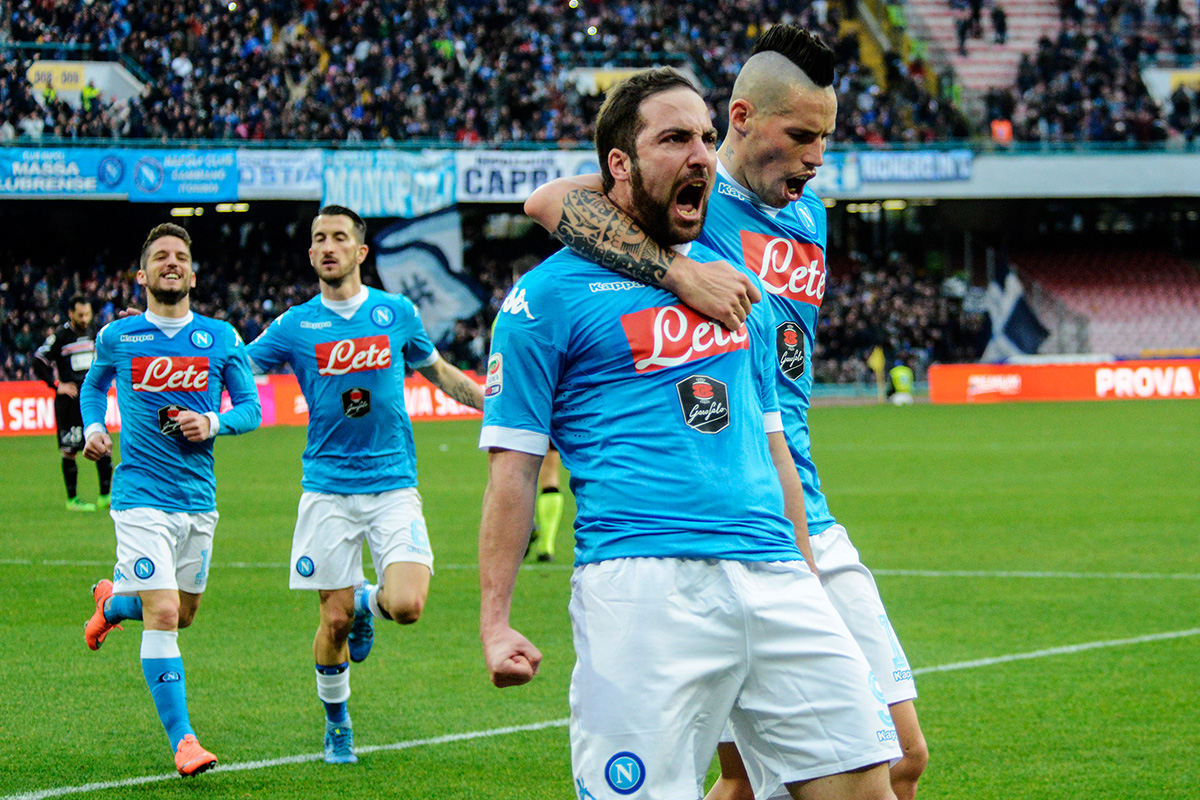 Sarri’s system and style ensured Higuain was the focal point of a very productive and incisive Napoli attack, atop a team that tended to dominate possession. Indeed, the Partenopei saw more of the ball on average than everyone else in Serie A last season. They also had a high amount of chance creation, and the striker was often on the end of moves one way or another.

At Juventus, this will not necessarily be the case.

Last season, the Bianconeri lined up in a 3-5-2 shape, with head coach Allegri generally opting for a pragmatic possession game. His style has been focused more on attacking transitions when up against teams with equal or superior possession, whether in Italy or abroad. Higuain is now playing for a side that creates less and where the focus is on functionality and selfless runs than ball possession and combinations.

Juventus’ strike partnership of Paulo Dybala and Mario Mandzukic worked so well primarily because of the latter’s willingness to open up space for the former. Dybala would play as a ‘nine-and-a-half’, while the Croat would look to drag defenders around in a bid to create gaps for other, deeper players to attack – the likes Sami Khedira (who has two goals in two league games this season) and the recently departed Paul Pogba.

Mandzukic's selflessness extended beyond making runs, winning aerial balls and linking up in the attacking phase; he would also work hard to drop back in the defensive phase, as Allegri prefers both of his strikers to apply pressure to the opposition centre-backs and defensive midfielders.

While Higuain, who many expect to take Mandzukic’s place, was used to acting as an attacking reference point, he will now have a much more important role without the ball; one that will require him to work harder than before. In attacking phases, his role will require more movement, spatial awareness and willingness to play others in.

Higuain is one of the finest strikers in the world, but all individual players are susceptible to the potential perils of systematic and stylistic change. He has the attributes to score goals for anyone, and he will add greater clinical edge to Juventus’ play in the final third, but in order to live up to the transfer fee, he must adapt.