Named player and manager of the month for January, Marcus Rashford and Ole Gunnar Solskjær have been quite the pair for Manchester United.

Few would have predicted the impact Solskjær has made so far at Old Trafford since taking over as caretaker manager following the sacking of José Mourinho in December, with the Norwegian having overseen nine wins and a draw in his ten matches in charge.

But, having been a prolific striker with elite finishing expertise during his own playing days at the Theatre of Dreams, if there was one player most assumed Solskjær's tutelage would benefit, it was Rashford.

His decisive goal in last weekend's 1-0 victory over Leicester City at the King Power Stadium was the England forward's sixth strike in eight starts under the new boss.

Having spent much of the past two and a half seasons stationed either wide or on the bench while Mourinho was in charge, Rashford has been restored to his best position, as a central striker.

And, scoring for fun while keeping £75million Belgian international Romelu Lukaku out of the team, Rashford is repaying his manager's faith in spades. 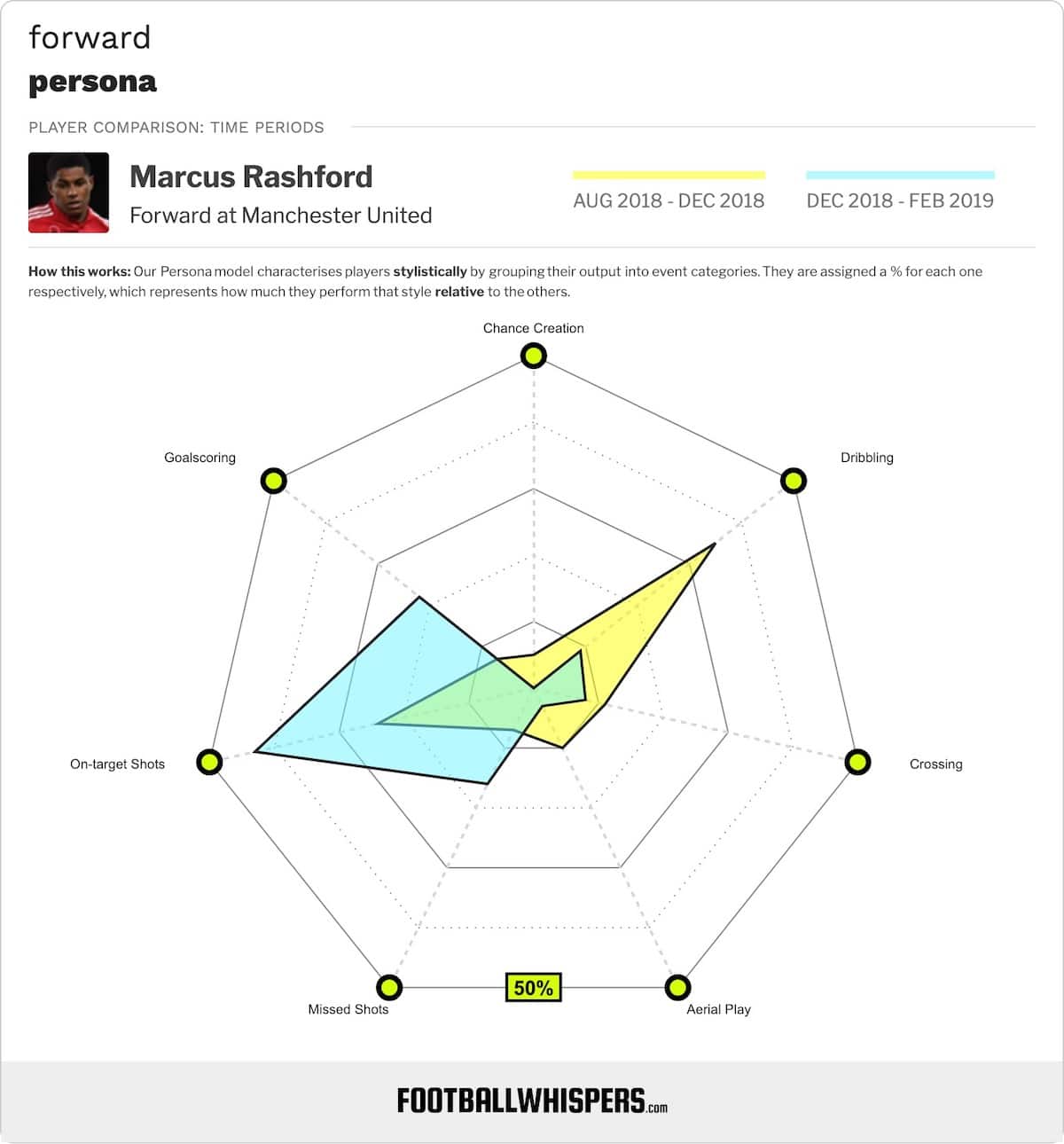 The above Football Whispers Player Persona illustrates the change in Rashford's game since shifting positions under Solskjær.

For the portion of the 2018/19 season Mourinho oversaw, the 21-year-old's remit was one of creativity, putting to use his pace and dribbling skills out wide to conjure chances for others.

Now, allowed to operate through the middle and use his speed and intelligent movement to get in behind the opposition, Rashford's scoring prowess has come to the fore.

That's not to say he is seeing less of the ball or dribbling less – his per-90 averages for passes and successful take-ons have remained almost exactly the same – it's just he is now getting the ball in more dangerous areas, with 6.68 touches in the opposition's box per 90 in the Premier League under Solskjær, compare to 4.34 for this season under Mourinho.

And, thanks, it seems, to the one-to-one work Solskjær is doing with the young striker on the training field, Rashford's improved finishing means he is ruthlessly making the most of the opportunities that are coming his way.