Following decades of domination under club legends Bill Shankly, Bob Paisley and Kenny Dalglish, the 1990s saw Liverpool FC fall from their perch to become the proverbial ‘nearly men’. But while Sir Alex Ferguson’s Manchester United gained all the plaudits on the pitch, it was undoubtedly the Wannabe playboy antics of Roy Evans’ squad that would Spice Up Our Lives during the Premier League’s early years.

In 1992, the inception of a brand new Premier League would change the beautiful game in an almost unfathomable manner. The landscape of British football had been transformed overnight, with money being the root of those monumental advancements. With vulgar sums of cash being splashed left, right and centre, players could suddenly demand five-figure weekly pay packets as well as netting obscene fees through advertising and sponsors.

A generation of rock star footballers had been born thanks to the momentum of the league’s growing global appeal. Liverpool’s star-studded squad were to become the first group of superstars to truly capitalise on the opportunity, becoming tabloid idols in the process.

In addition to the astronomical financial inflation, progressions in technology resulted in far greater public exposure. The deal with Sky television enabled fans to watch dozens of live matches each season whilst additionally keeping abreast with all the latest information like never before. Simultaneously, the internet was beginning to work its way into British household whilst a boom in the video games industry allowed children to imagine being their idols, or at least a computerised version of them, on a daily basis. The entire football world had been turned on its head and players were set to become the biggest beneficiaries.

Football wasn’t the only facet of British culture to thrive in this exciting era. In politics, Tony Blair’s New Labour had struck a chord with the nation’s youth with promises of a ‘New Britain’. Meanwhile, the Britpop movement had made the British music scene relevant once more as bands like Oasis unleashed a new sound on the world. Likewise, the Spice Girls (whom would later become the inspiration behind the Daily Mail’s pithy branding of Liverpool’s rock stars ) brought an ethos of Girl Power to launch a global phenomenon..

Nevertheless, the universal success of Premier League football had thrust footballers to the forefront of public adulation.With the added buzz surrounding the announcement Euro ’96, which would be the first major tournament held on British shores since England’s finest sporting hour thirty years previously, the popularity of our beautiful game had reached new heights. Football in Britain had broken away from the hooliganism that had tainted the beautiful game for over two decades, and was rapidly building a more family friendly activity.

Supporters hadn’t yet become alienated from their stars, but players were slowly moving away from the status of working-class heroes to become millionaire celebrities; Liverpool’s perennial nearly men were undoubtedly the primary culprits. 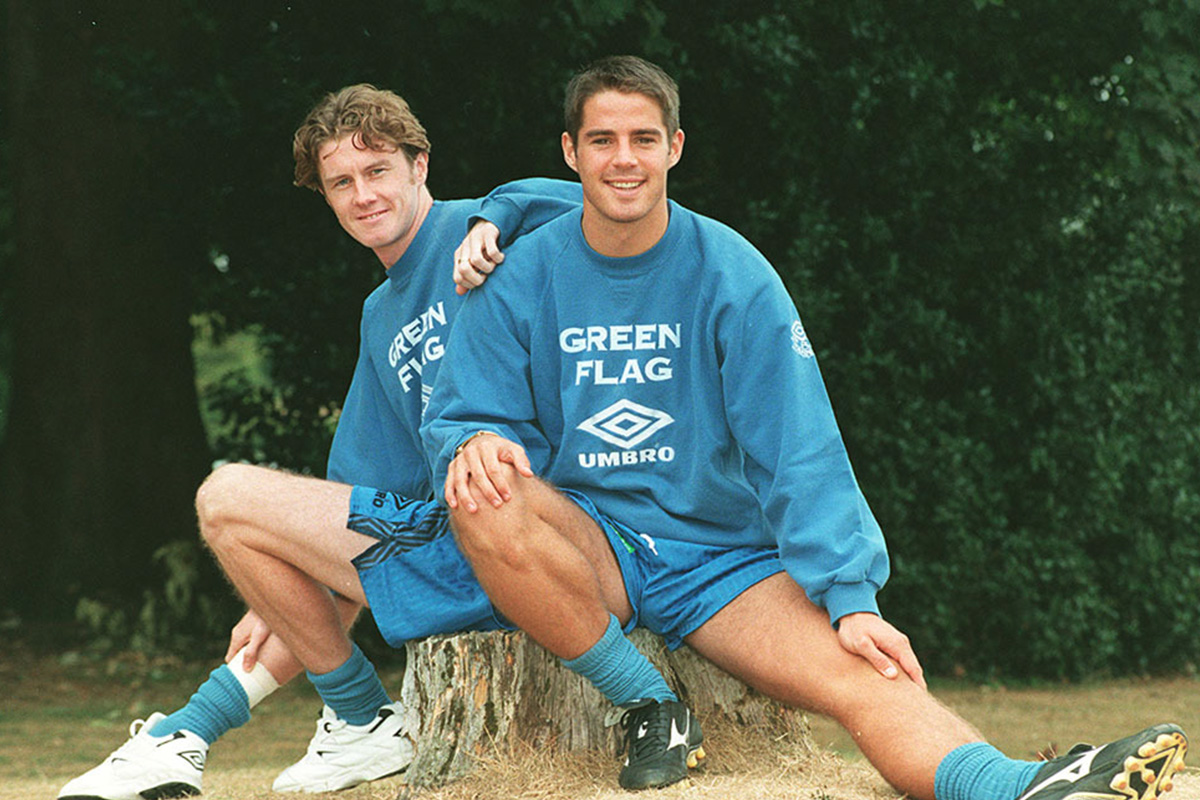 The club’s stature ensured that Liverpool would remain in the spotlight irrespective of on-field performances. Subsequently, the photogenic figures of Jamie Redknapp, Steve McManaman, David James and Stan Collymore had suddenly been presented with the keys to a realm of celebrity that no previous generation of footballers had been afforded. Manchester United’s George Best had transcended the sport to become the fifth Beatle thirty years previously, but Anfield now had an entire band of football rock stars. With a world of riches quite literally at their feet, the Premier League playboys had no qualms with making the most of this unrivalled opportunity.

The Liverpool stars were quick to flaunt their cash with a level of careless spending previously reserved for Hollywood A-Listers. Sports cars, multi-million pound mansions, and expensive fashion labels became ubiquitous with the Anfield lifestyle while crazy nights out and relations with glamour models and other beautiful women became instant headline stories. A dangerous cocktail of sporting status and socialite behaviour ensured that the Reds side became more recognised as tabloid-fodder rather than world-class footballers.

Rather than shy away from the media storm, though, the future Spice Boys lapped it up. Since retiring, defender Neil Ruddock has gone on record to say he loved the fame, fortune and lavish lifestyle. Their antics certainly helped re-write the blueprint of what it means to be a professional football at the elite level, underlining sentiments that the sport was no longer the working man’s game of previous generation.

Other members of that famous side insist that their off-field boisterousness had no negative impact on performances. Whilst that may be true, stories of players passing a coin around in matches to decipher whose turn it was to buy the night’s first round only add further colour to an already vivid painting.

As far as football matters were concerned, the emergence of future Kop legend Robbie Fowler appeared to be the final piece in the Evans puzzle. The Reds now seemingly possessed everything needed to win major honours. Whilst league success continued to elude the side, a 1996 FA Cup appearance awarded this crop of Liverpool stars with the chance to finally rid themselves of the ‘perennial underachievers’ tag.

Instead, it provided an image that would encapsulate the entire feeling surrounding Liverpool’s playboy antics and continues to haunt members of the group two decades later. A picture paints a thousand words: in this instance, none of them were positive.

When the choice of pre-match attire is more memorable than the Wembley final itself, especially one that was contested by the fierce rivals from Merseyside and Manchester, there must be something wrong. And wrong is certainly an apt word to describe Liverpool’s ghastly cup final suits. 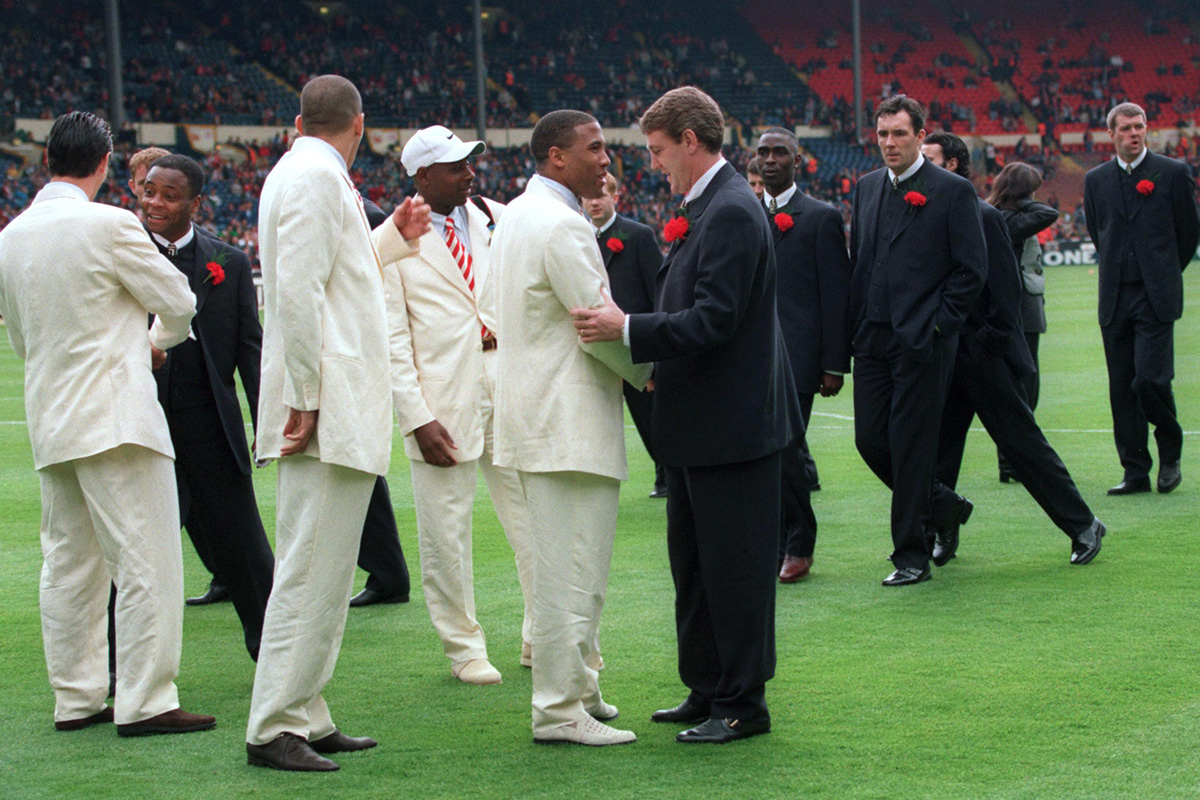 The memory of Liverpool’s star-studded squad stepping out into Wembley in those blinding cream Armani suits is one that can never be erased from any football fan’s brain; unsurprisingly, it is a clip that often escapes the archives to embarrass those involved. The monstrosity was completed by pale blue shirts, along with the diagonal red and white stripes of the club ties. Absolutely awful. On the bright side, at least it would detract from the equally disastrous green and white quartered away strip.

For a squad of players heralded as fashion icons, this wasn’t their best day. Things didn’t get much better on the pitch either as Eric Cantona’s late volley handed Manchester United the trophy, condemning Liverpool’s rock stars to further criticism.

That summer would see a girl group burst onto the music scene with their debut number one single and soon after the term Spice Boys was coined by the press as a derogatory moniker for Liverpool’s Premier League playboys. Images of that horrific cup final suit would continually be used as a weapon against the group throughout the ensuing months; there was no getting away from the public onslaught, and it would essentially define the squad with greater authority than anything the players could accomplish on the pitch.

The Anfield stars would live up to their rock star image on the pitch too, though, providing neutrals with two of the league’s most iconic matches courtesy of two unforgettable 4-3 victories over Newcastle United. But while the Spice Boys certainly had the rhythm and showmanship to entertain, the absence of championship-winning bass-line was visible to everyone.

Liverpool’s struggle to turn potential into trophies continued, as did the lavish lifestyle of their players. Even members of the group that had left were dominating headlines for their off-field antics, most notably Collymore for the wrong reasons. The Spice Boy’s failure became Too Much for the board and Evans consequently paid with his job in November 1998. What could have been another glorious era in the club’s illustrious era had materialised into a nightmare of unfulfilled potential, exacerbated by the success of their arch rivals at Old Trafford, and the infiltration of outside influences were partly to blame.

Inevitably, it wasn’t long before we said Goodbye to the Spice Boys forever as they were instructed to Move Over in favour of Gerard Houllier’s French revolution. The summer of 1999 saw James, McManaman and McAteer all make swift Anfield departures, thus pulling  the curtain down on the Premier League’s first supergroup of celebrity playboys.

The shift turned out to be a masterstroke for Liverpool as remaining stars Fowler, Redknapp and Owen went on to lift a treble of cup trophies, formed of both domestic cup honours as well as the UEFA Cup, just two years later to initiate a resurrection that would ultimately culminate with the Reds being crowned king of Europe by winning the Champions League final in 2005.

However, it is the images of those cream suits that remain freshest in our collective minds.

They might have failed to fulfil those prophecies on the Anfield turf, but their legacy on the pitch had been written into the Premier League annuals and the Spice Boys will always be heralded as one of the key stories during the infancy of a new look English football system. Liverpool fan or not, we were all fascinated by their headline-making glory; Viva Forever the class of ’96.