There was good news for many supporters of Premier League teams before this season kicked off, with several clubs agreeing to either freeze or reduce the cost of their season tickets.

West Ham United offered their fans the greatest saving: the cheapest seat at the 60,000 capacity London Stadium could be secured for the season at a cost of £298 – £328.50 cheaper than the least costly ticket at the 35,000-seat Upton Park last term.

Hull City decided to do away with season tickets all together, and instead implemented a membership scheme which could save fans as much a £282.

Smaller reductions of £25 and £36 were introduced at Liverpool and Everton respectively. The rest of England’s top flight elected to freeze their prices, with the exception of Middlesbrough and Sunderland who raised the price of their cheapest season ticket by £109 and £10 respectively.

For the most part, this has been seen as a progressive step. A spokesman for the Football Supporters’ Federation (FSF) welcomed the effort made by most Premier League clubs: “After England’s humiliating exit from Euro 2016, there is some good news for football fans at last.

“We asked our members for their thoughts on what their own clubs were doing on ticket prices for 2016-17 and most thought their clubs were taking a step in the right direction.”

This came hot on the heels of the implementation of the £30 cap on individual tickets for away supporters in the Premier League too.

And when Liverpool announced plans to introduce a £77 matchday ticket, Reds fans made their feelings known by leaving the ground early during their team’s game against Sunderland in February – the first organised, collective walkout in the club’s rich history — as a form of protest. The Anfield club relented and agreed to keep their highest priced ticket at £59.

But there is still plenty more that can be done. 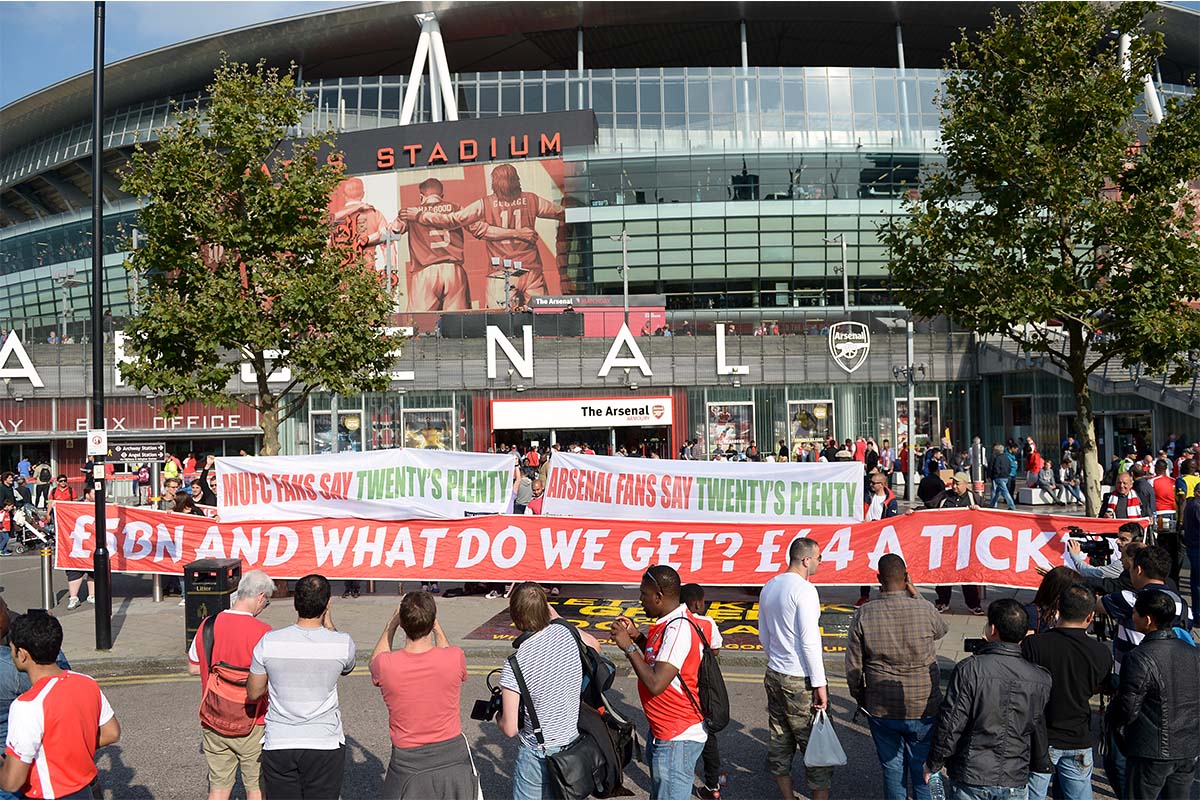 Last season, rival fans from Arsenal and Tottenham Hotspur united to release a joint statement urging their clubs to address the over-pricing issue. The Gunners and Spurs have frozen their season ticket prices for 2016-17, but they remain the most expensive sides in the country to support, with a Tottenham season ticket costing fans at least £765, while the cheapest seat inside the Emirates will set you back a whopping £1,014.

The new £8.3 billion Premier League TV deal will see each club receive a healthy share of the cash-stuffed pie; Saturday afternoon gate receipts are no longer the primary source of income for elite football clubs.

In fact, the money that clubs collect from ticket sales has been dwarfed by TV, sponsorship and merchandise income to the point where, as a recent study showed, Premier League sides could allow fans through their gates for free every week and not make a penny less than they hauled in last season.

With an average season ticket price of around £500, the Premier League is the most expensive major division in Europe.

The powers that be at these clubs would argue that their prices are a reflection of the quality of football on display in England, with many of the world game’s brightest stars plying their trade in the English top league.

If you want see the likes of Sergio Agüero, Mesut Özil and Paul Pogba, you should have to pay accordingly. And the Premier League itself continues to proclaim to be the ‘best league in the world’, so it stands to reason that it should be the costliest.

But that line of reasoning crumbles under the mildest scrutiny. The performance of English sides in the Champions League – Europe’s most prestigious club competition – would suggest that they are some way behind the top teams of Spain, Germany and even Italy. 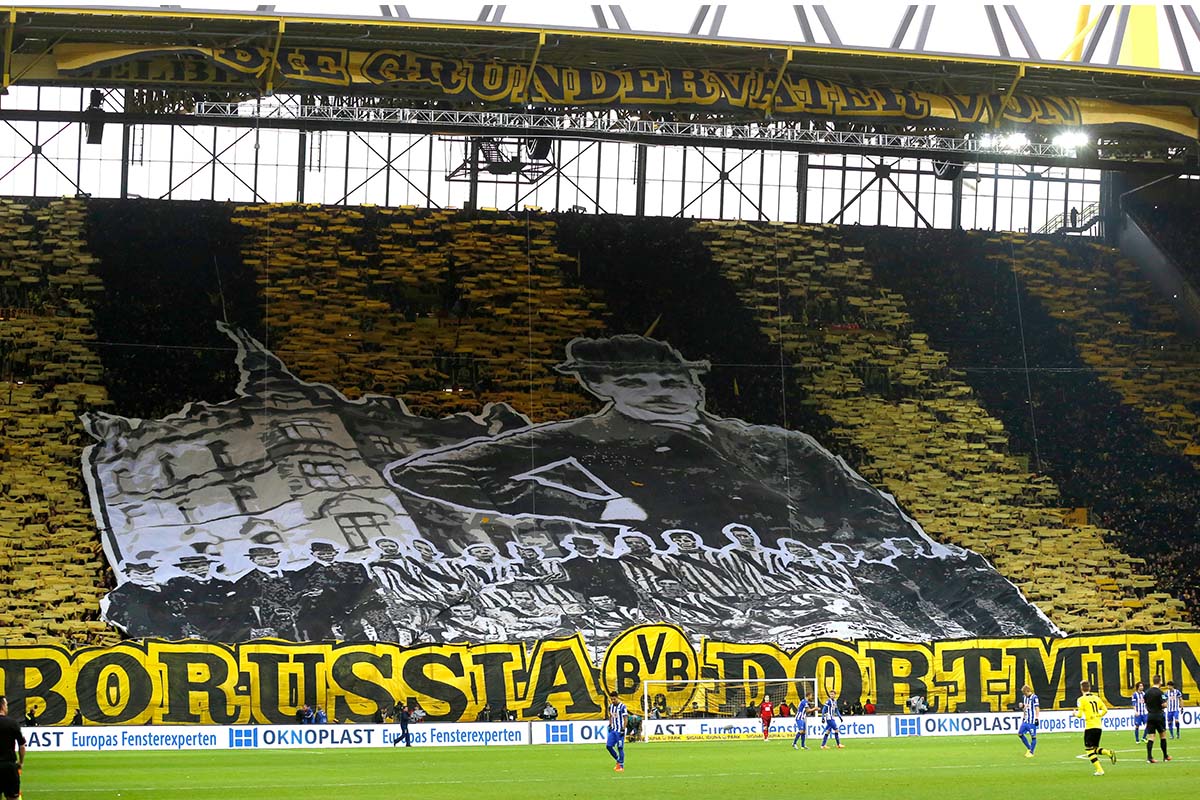 In the last five seasons, the Premier League has been represented only once in a Champions League final, the same number of finalists as Italy’s Serie A; Germany’s Bundesliga has produced three finalists while Spain’s La Liga has dominated with five.

The Premier League hasn’t had a winner of the Ballon d’Or – the yearly award recognising the world’s best footballer – since Manchester United’s Cristiano Ronaldo receive the accolade in 2008. In the last five years, no England-based player has even made the top three (The Bundesliga has had two players in the top three, while La Liga again dominates with 13).

So there is no qualitative reason for admission to Premier League games to be more expensive than elsewhere on the Continent.

But a season ticket with many of Europe’s elite clubs costs far less than the Premier League average.

Juventus have been Serie A champions for the last five years, their cheapest season ticket ahead of this season was priced at £384.98, about £10 cheaper than English champions Leicester City, £147.02 cheaper than Manchester United, and a staggering £629.02 less than Arsenal.

Roma are even less expensive than their rivals with season tickets starting at £238.64, and that even includes entrance to one Coppa Italia fixture on top of 19 Serie A matches.

You can soak up the atmosphere inside Signal Iduna Park and become part of Borussia Dortmund’s famous Yellow Wall for as little as £100.43 per season — £585.57 less than Liverpool and £547.57 cheaper than Southampton.

When you consider the fact that many German cities offer free public transport for ticket-holding supports on game day, the cost of attending Premier League fixtures pales in comparison.

Monaco often struggle to fill the 18,523 capacity Stade Louis II, but that’s not because fans are being priced out. A season ticket for Les Rouges et Blancs can be purchased for just £138.74.

If you fancied regularly marvelling at the other-worldly talents of Lionel Messi, Luis Suarez and Neymar this term, you could have obtained a Barcelona season ticket for as little as £103 – similar prices can be found at Real Madrid. And Portuguese powerhouses Porto and Benfica start their pricing at around £100.

Further afield, you could have gotten a regular seat at Yankee Stadium to watch Andrea Pirlo, David Villa and Frank Lampard this season for £254.61.

The reason that Premier League season tickets remain so expensive is down to the simplest rule of economics: supply and demand.

Despite the high prices, most stadiums in England’s top league are sold out every week; if one person decides enough is enough and refuses to renew their season ticket, there will be a queue of supporters happy to take their place.

Unless fans are prepared to collectively vote with their feet and walk away, real, significant change is unlikely. 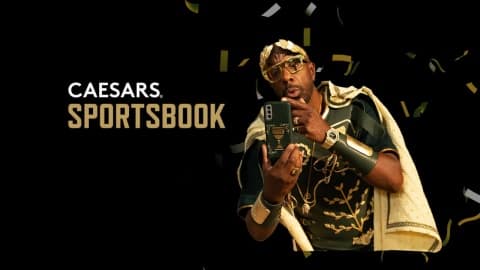