Apart from a few well documented exceptions, many of the title run-ins throughout the 1990s and 2000s followed something of an all-too-predictable trend, but in the mid-1980s we were treated to one of the most epic campaigns in living memory – not just in England, but Scotland too.

Football was a very different place than it is now some three decades ago and going into the 1985/86 campaign many felt the game was on the brink of oblivion.

In the previous 12 months Millwall fans had gone on the rampage at Luton, a young supporter had been killed after fighting between Birmingham City and Leeds fans, 56 people had died as a result of a fire that engulfed the main stand at Bradford City’s Valley Parade ground and another 39 lives were lost following rioting at Heysel prior to the European Cup final between Liverpool and Juventus.

Add a TV black-out, which meant pretty much all domestic fixtures went unshown, attendances at an all time low and the crippling financial implications of a UEFA ban on English clubs competing in Europe and it's easy to see why there were serious concerns about the future of our national game. Football was in a dark place and we needed something to rekindle our love for the game and that’s just what the 1985/86 provided.

It had been 18 years since Manchester United had last won the title and Ron Atkinson’s side had good reason to believe this could be their year after a getting off to a flying start to the season. After winning the opening game against Aston Villa, United would go on to win their first 10 fixtures of the season and wouldn’t lose a match until November, prompting one particular tabloid to proclaim: “It’s All Yours, Ron!”

United’s subsequent collapse, however, was so spectacular that they were virtually out of the race before spring as, after winning their first 10 and going the first 15 without defeat, they would then lose 10 of their remaining 27.

It was another United, West Ham United, who would also make a good start, becoming something of the surprise package of that season. The then relatively unheard of Frank McAvennie had arrived in East London that summer having signed from St Mirren, and would soon set-about terrifying defences across the land, along with his strike partner Tony Cottee. 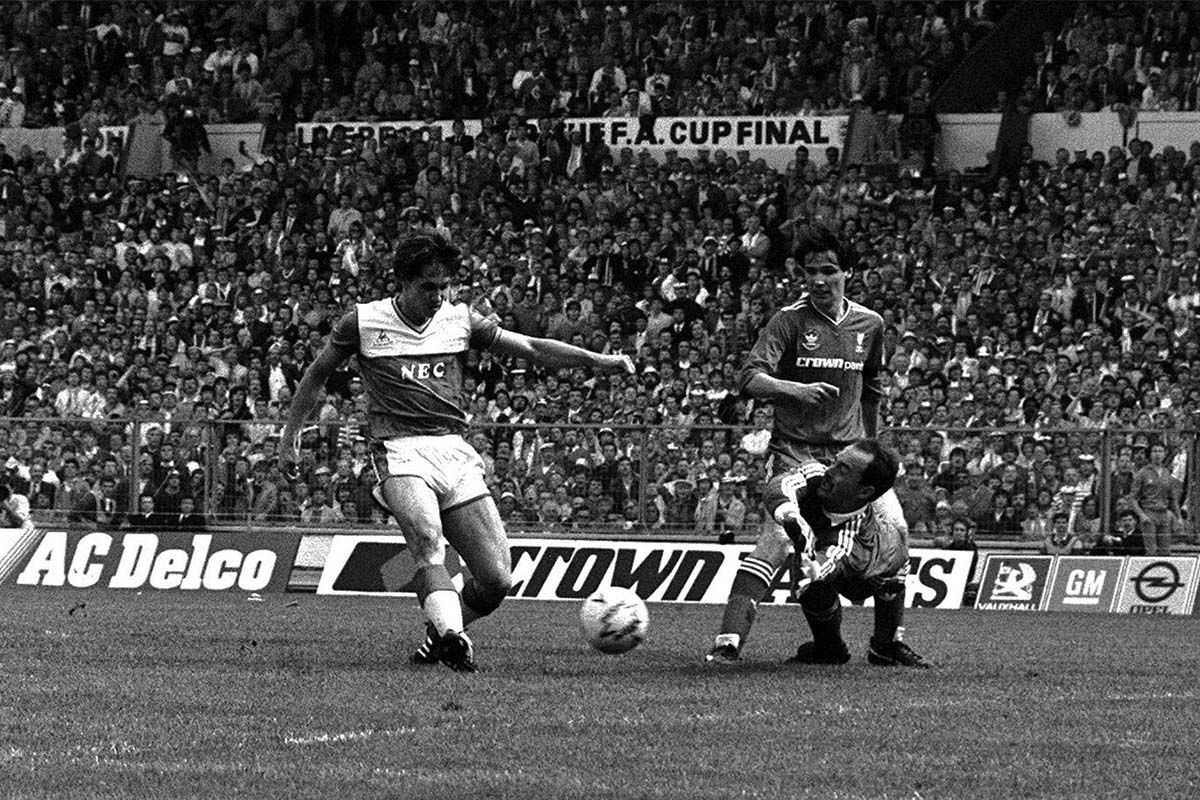 Meanwhile Chelsea, under the management of John Hollins, were second at the turn of the year, two points behind Manchester United as Kerry Dixon and David Speedie did their best to rival the forward line at West Ham by scoring goals for fun. They would still be in the title race in mid-March just four behind leaders Everton with two games in hand.

However, Chelsea would only pick up nine points from the last 33 as the fixture list did its best to conspire against the Blues. Just 24 hours after a 1-0 against Southampton they had to play the final of the new-fangled Full Members Cup against Manchester City. They won 5-4 but the run would certainly take its toll on the side.

But unlike today, the season that was becoming so unmissable for fans was actually being missed as a dispute between the TV companies and the clubs meant that armchair fans were starved of any live action until well after Christmas.

Club chairmen had, for reasons only they will know, decided to go to war with the BBC and ITV over the £17m the broadcasters had offered for the televised rights at just the wrong time. With ideas somewhat above their station they failed to recognise that not only was English football at its lowest point, but with no satellite broadcasters rivalling the two main channels at the time something of a cartel was in operation.

Sunday afternoon games would eventually be back on our screens just in time to see Manchester United’s promising start fall apart at the seams and also just about the time that the two Merseyside teams were ready to mount their title challenges in earnest.

Liverpool were very much a team in transition at the time, after Joe Fagan had dramatically resigned at the end of the previous campaign Kenny Dalglish found himself as player manager of a side still coming to terms with the loss of Graeme Souness who had left to join Sampdoria. Reigning champions Everton, meanwhile, had the best side they had assembled in decades and had added Gary Lineker to their forward line, he would eventually end the season as the league’s top scorer.

Everton had started sluggishly, but by February they were three points clear of a flagging Manchester United with a game in hand, and eight points clear of their arch-rivals Liverpool after a convincing 2-0 win at Anfield – to most onlookers they appeared to have the league sewn up.

But Dalglish’s men had other ideas. There was a saying in the 1980s that Liverpool were at their most dangerous when they were behind and this was certainly the case come the business end of the 1985/86 season.

A week after that defeat to Everton, Liverpool grabbed a late winner against Spurs at White Hart Lane, a result which acted as something of a springboard, they would go on to win 10 of their last 11 matches and drawing the other. In the meantime, Everton would draw three times and suffer two painful defeats, the second being a crucial 1-0 loss at Oxford – the story about Lineker’s lucky boots going missing that night has even passed into Everton folklore.

“It’s true,” Lineker later admitted. “I had a pair of lucky boots – not that I was superstitious or anything – which I’d been scoring loads of goals with. They’d been repaired about three times so I could carry on wearing them. For some reason they weren’t in the skip that night at Oxford. I don’t know why. I wore a new pair and had one or two half-chances which went begging.”

This meant that going into the last Saturday of the season three sides, West Ham, Liverpool and Everton were in with a chance of winning the title. But the momentum was very much with the red side of Merseyside as Liverpool travelled to face Chelsea at Stamford Bridge, knowing a victory would give them the title.

Everton couldn’t have done anymore. They destroyed Southampton 6-1 at Goodison Park thanks to a Gary Lineker hat-trick after he’d been reunited with his favourite boots and West Ham went down 3-2 to already relegated West Brom.  But all of this was irrelevant as a Kenny Dalglish goal midway through the first half meant Liverpool got the win they needed and would become champions for the 16th time in their history.

Everton had the chance for revenge as they met Liverpool a week later at Wembley in the FA Cup final and in a game that mirrored the season found themselves cruising at half-time after Gary Lineker had given them a 1-0 lead. But as in the season that had gone before, Liverpool came from behind and eventually ran-out 3-1 winners to clinch the double for the first time in their history. 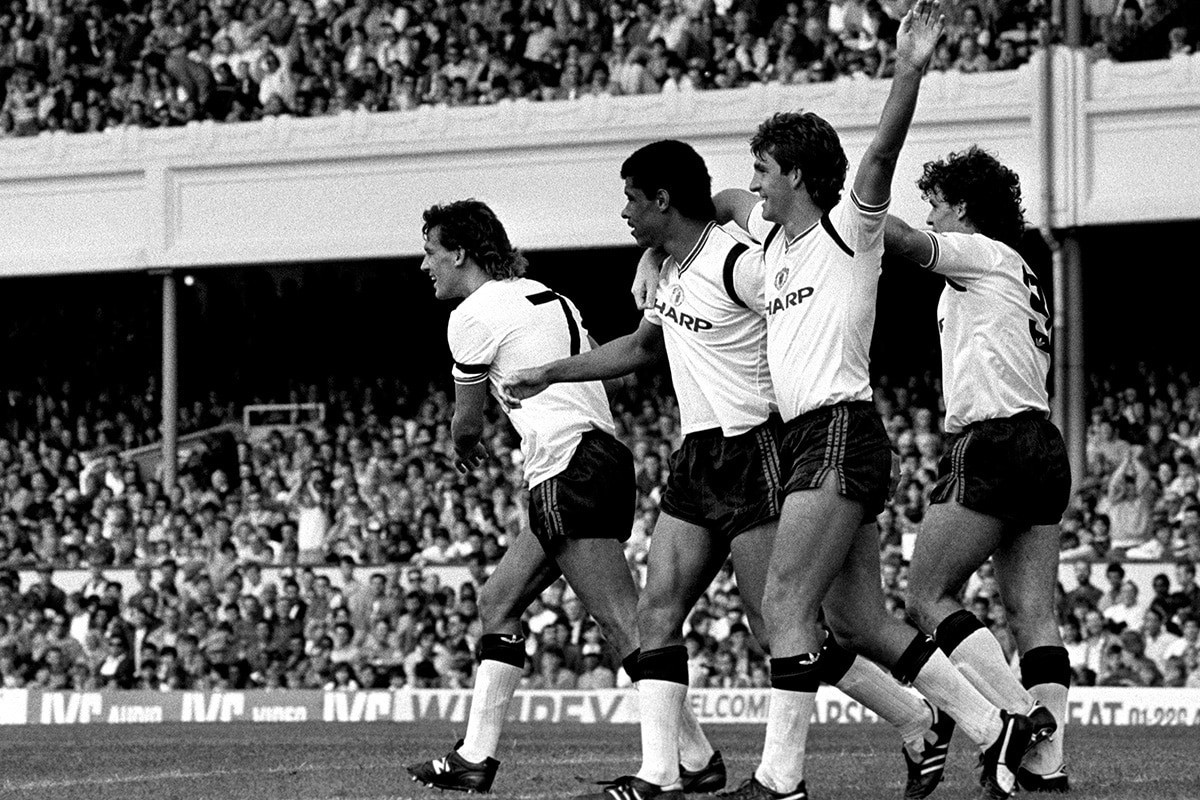 The excitement in the 1985/86 season wasn’t just confined to the English league season, north of the border fans were to be treated to one of the most memorable campaigns in living memory.

Hearts and Celtic drew on the first day of the campaign but nobody at the time could have realised it was to be a sign of how tight their fight for the title would eventually be. Hearts had only been promoted just a few seasons before and were considered by most to be also-rans, while Celtic at the time were still in the shadow of Dundee Utd and champions Aberdeen.

Alex Ferguson’s Aberdeen had topped the table until Christmas after trading blows with Rangers and Celtic but Hearts had overtaken them in the New Year with a momentum that was as unstoppable as it was unexpected.

They went 27 games unbeaten, but Celtic remained on their coat tails and on the final day of the season Celtic needed to hammer St Mirren and hope that Hearts failed to get the point they needed to win the league.

Dundee substitute Albert Kidd would go down in folklore, sensationally scoring twice in the last ten minutes against the champions elect Hearts as Celtic put five past St Mirren to take the title on goal difference.  Supporters with transistor radios spread the news among the delirious away section at Love Street and Celtic, who had only been top for two weeks in the autumn, were champions. Hearts fans were devastated.

“The last 20 minutes of the St Mirren game were surreal as we genuinely did not know what was happening,” remembers Celtic’s Murdo MacLeod. “With a few minutes left St Mirren goalkeeper Jim Stewart had the ball in his hands and the terraces just erupted. When the final whistle went it was the manager who told us that we had won the league.”

The tussle for the title between Everton, West Ham, Chelsea, Manchester United and Liverpool had given the English game the lift it so desperately needed in its darkest hour, not to mention the efforts of Oxford United in winning their only major honour by lifting the League Cup. And the scenes of pure joy and bitter disappointment in Scotland on that final day would not be replicated for decades to come.

The highs and lows of the epic that was the 1985/86 season were summed up perfectly by Chelsea manager John Hollins after his team had lifted the soon to be defunct Full Members Cup 5-4 to Manchester City at Wembley: “If football’s dying, I hope it’s dying like that.”