Throughout an eight year period commencing with Liverpool’s incredible night in Istanbul, the Premier League provided exactly half of the 16 Champions League finalists, including both as Manchester United beat Chelsea on penalties in 2008. Despite such continental dominance, England wasn’t represented in the 2009-10 final. However, in that season's Europa League, Fulham went within touching distance of becoming English football’s most unlikely source of European success.

Fulham Football Club was, and still is, a well respected institution. Over the years, Craven Cottage has played home to such icons as Bobby Robson, Jimmy Hill and Johnny Haynes, while even George Best enjoyed a short stint in west London.

The Cottagers had additionally performed well to establish themselves as a Premier League outfit since rejoining the top flight in 2001, earning their first experience of continental competition by qualifying for the 2002-03 Intertoto Cup. Nevertheless, nobody would’ve expected a club without a single major honour to its name to make any real headlines on the European stage.

With Everton, Aston Villa and eventually Liverpool joining them in the competition, Fulham weren’t even expected to be England’s last remaining representative. Not only did they outlast their fellow Premier League counterparts, they did it with one of the most stunning runs to the final imaginable.

Joining the competition in the third qualifying round meant that Fulham’s competitive season started as early as the last week of July. Though the knock-on effect of such a lengthy participation in the Europa League would hinder their league progress – the Cottagers eventually finished 12th, 17 points adrift of the top seven – Hodgson’s men eased through that first test thanks to a dominant 6-0 aggregate win over Lithuanian side FK Vetra. After beating Russian outfit Amkar Perm in the play-off round with a 3-2 aggregate victory, despite a late scare in the second leg, the Whites had sealed a place in the group phase.

Aston Villa had already crashed out at the play-off stage, losing on away goals to Rapid Vienna. After seeing the group stage draw, many believed Fulham would join the Villans in exiting the competition before the turn of the year.

The Cottagers were paired with Italian giants Roma, along with an experienced Basel and capable CSKA Sofia. Hodgson’s men were fortunate to leave Bulgaria with a share of the spoils in their opening game as Diomansy Kamara’s equaliser was one of very few attempts registered by the visitor. With even tougher tests to come, a group phase exit looked more than plausible. 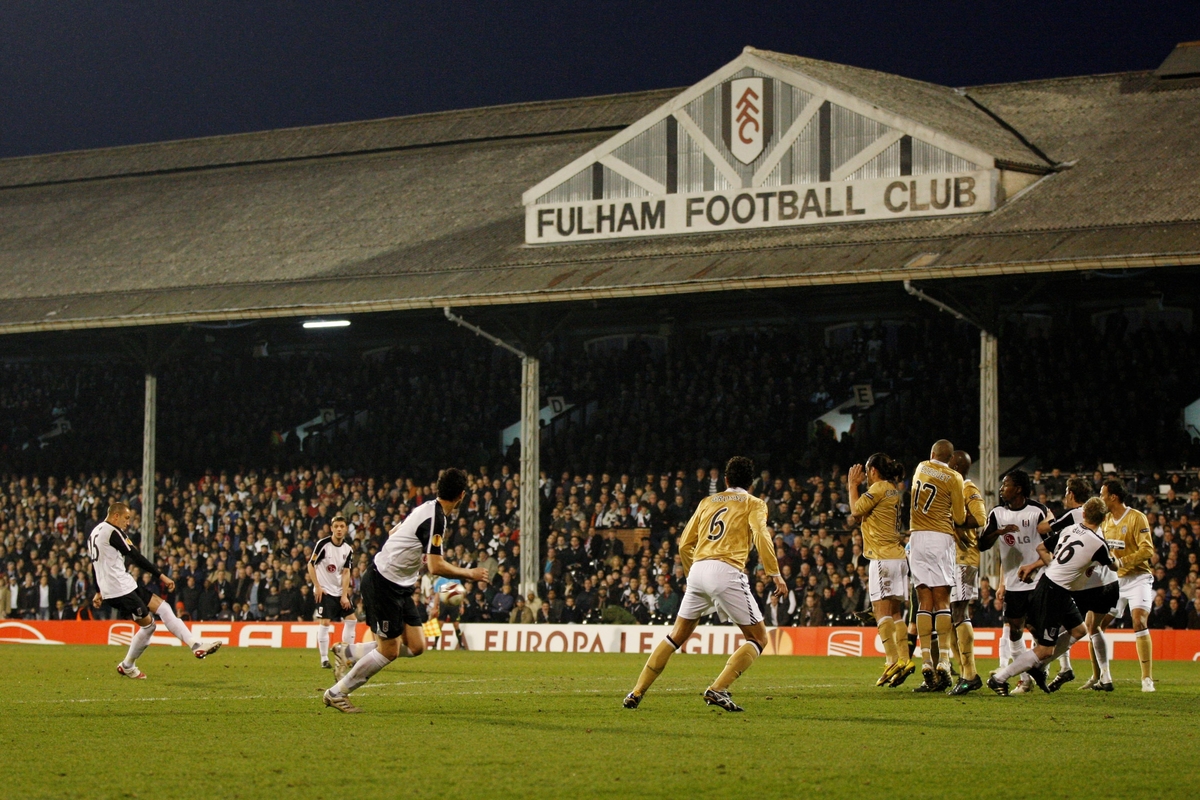 This Fulham side wasn’t short of quality, though. David Stockdale had deputised in Sofia but the Cottagers had Mark Schwarzer as the regular number one while Hodgson’s vast defensive options allowed for plenty of manoeuvrability.

Brede Hangeland would be the central figure throughout the eventual run to Hamburg, with Chris Smalling, Paul Konchesky, John Paintsil, Chris Baird, and Stephen Kelly all playing important roles at various stages. Despite the manager’s often regimented defensive approach, the Premier League side enjoyed a healthy sprinkling of attacking magic too.

Even now, Hodgson probably doesn’t receive the credit he deserves for the progress achieved at Craven Cottage, especially in the transfer market. The additions of Damien Duff and Jonathan Greening provided a spark while fitting in perfectly with the workmanlike mentality of the squad, which was most evident throughout a spine that also included Danny Murphy and Dickson Etuhu.

However, Hodgson was more than a little fortunate when Bobby Zamora decided to stay despite the manager’s willingness to sell. The Barking-born 6ft striker responded with arguably his best ever season, capitalising on Andy Johnson’s long-term absence. An impressive partnership with attacking midfielder Zoltan Gera would prove pivotal throughout the campaign, while Clint Dempsey would also offer physicality and technique when called upon. 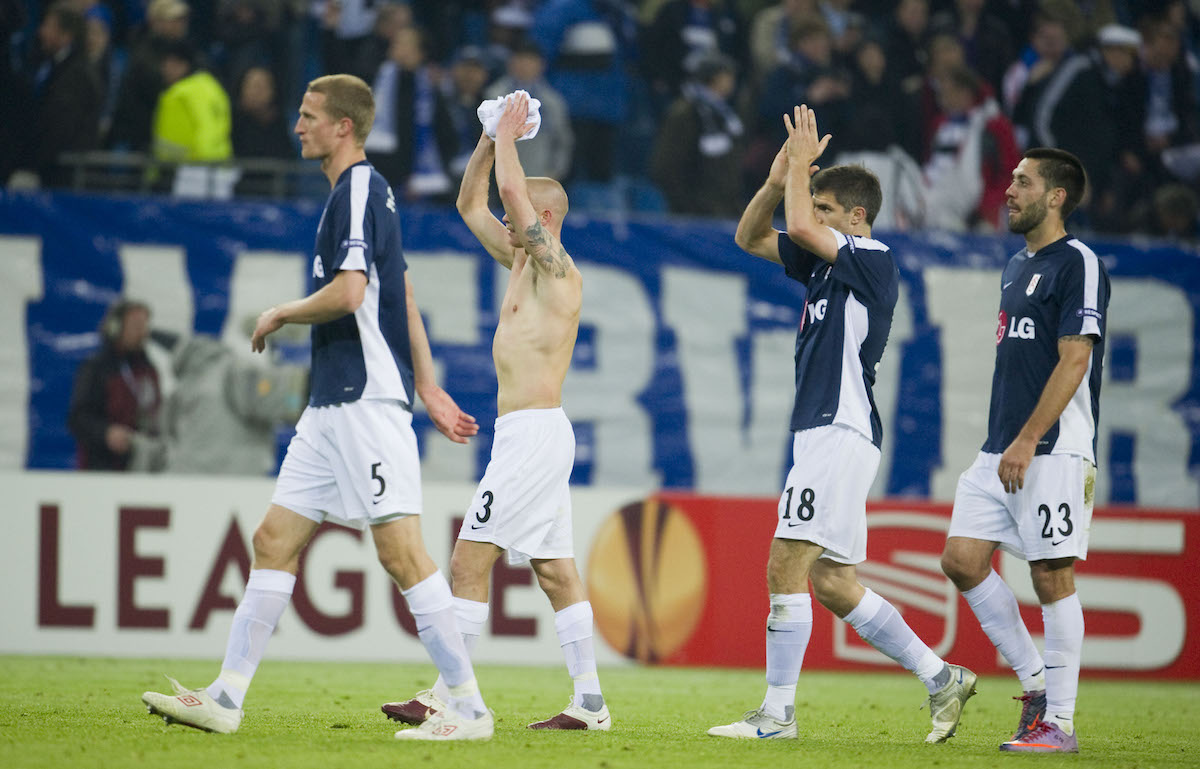 Fulham’s grit and determination was tested in the second group game, with Murphy’s second-half strike enough to win a crucial match against Swiss side Basel. In their third game, at home to Roma, the Cottagers very nearly registered one of their most memorable wins ever before being pegged back in the dying seconds. That moment, coupled with a 3-1 defeat in the reverse clash just a fortnight later, threatened to derail their Europa League adventure.

However, Hodgson’s spirited squad battled back with a 1-0 home win over CSKA before registering a crucial 3-2 win in Switzerland with a mature and disciplined display at St Jakob Park. It certainly hadn’t been easy, but a return of 11 points was enough to see Fulham join Roma in the knockout phase. As far as all outsiders were concerned, the Cottagers had already performed beyond expectations.

Despite Hodgson’s Premier League focus, the journey was set to continue. And the rollercoaster ride was about to hit overdrive.

The previous year’s UEFA Cup winners awaited in the round of 32. A famous 2-1 home win over a Shakhtar Donetsk team including Fernandinho, Jadson, Luiz Adriano, Willian and Dario Srna signalled a new highlight for Fulham, who would follow this with a 1-1 draw in Ukraine to progress.

Things weren’t about to get any easier, however, as Juventus were to be their last-16 opponents. After a 3-1 hammering in Turin, the adventure looked all but over. 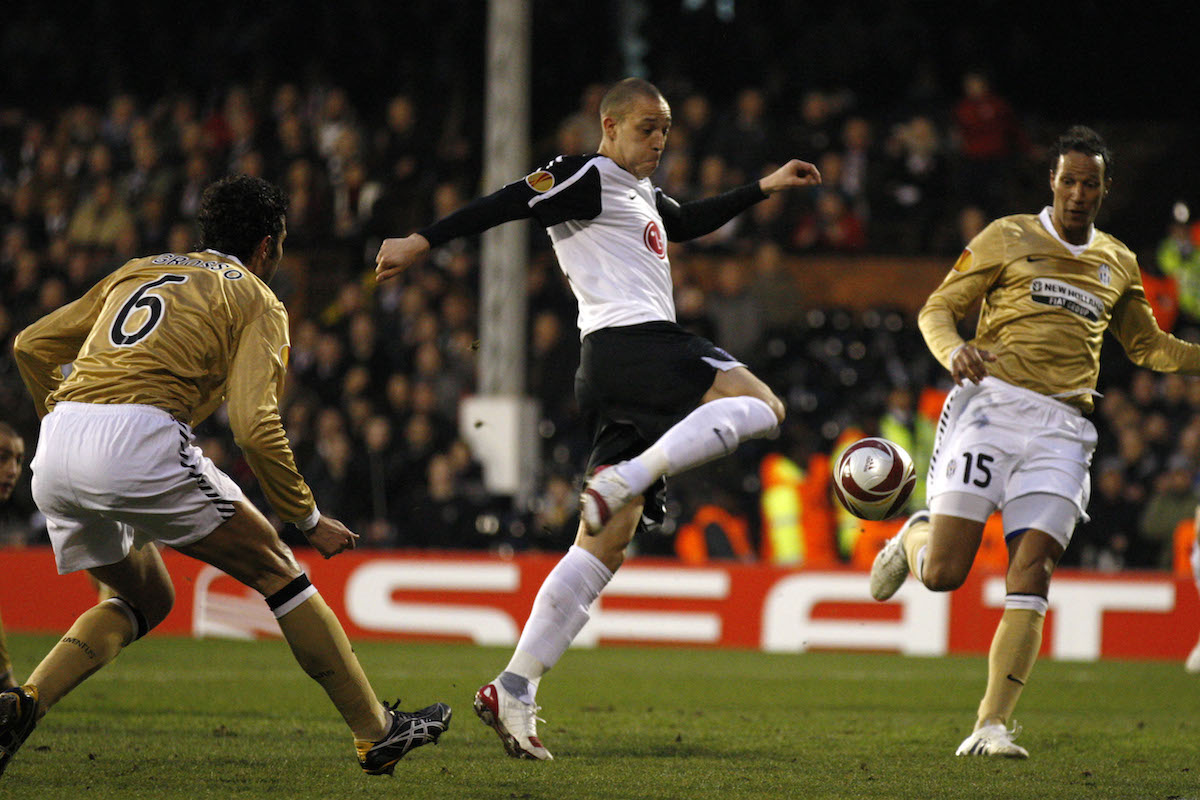 Fulham’s fate was virtually sealed when David Trezeguet opened the scoring at Craven Cottage within the first two minutes. Sometimes, when the stars align, football writes the craziest stories imaginable – this was one of those occasions.

When Zamora restored parity on the night just six minutes later thanks to a cool chest and finish, Fulham fans regained hope of recording a memorable second leg result, but nobody could have foreseen what was about to unfold. With just 26 minutes on the clock, Italy’s World Cup-winning skipper Fabio Cannavaro was dismissed for a professional foul on Gera following Zamora’s perfectly timed through ball.

Craven Cottage responded to the numerical advantage by increasing the volume; the players responded by increasing the pressure on the 10-man Bianconeri, hitting the woodwork twice before Gera’s close range finish ensured that the hosts entered the break leading 2-1 on the night.

The next 45 minutes had the potential to be one of the best halves in Fulham’s history, and it didn’t take long for the action to resume as the Cottagers were awarded a penalty just three minutes into the second half. In Murphy’s absence, Gera converted: 3-3. 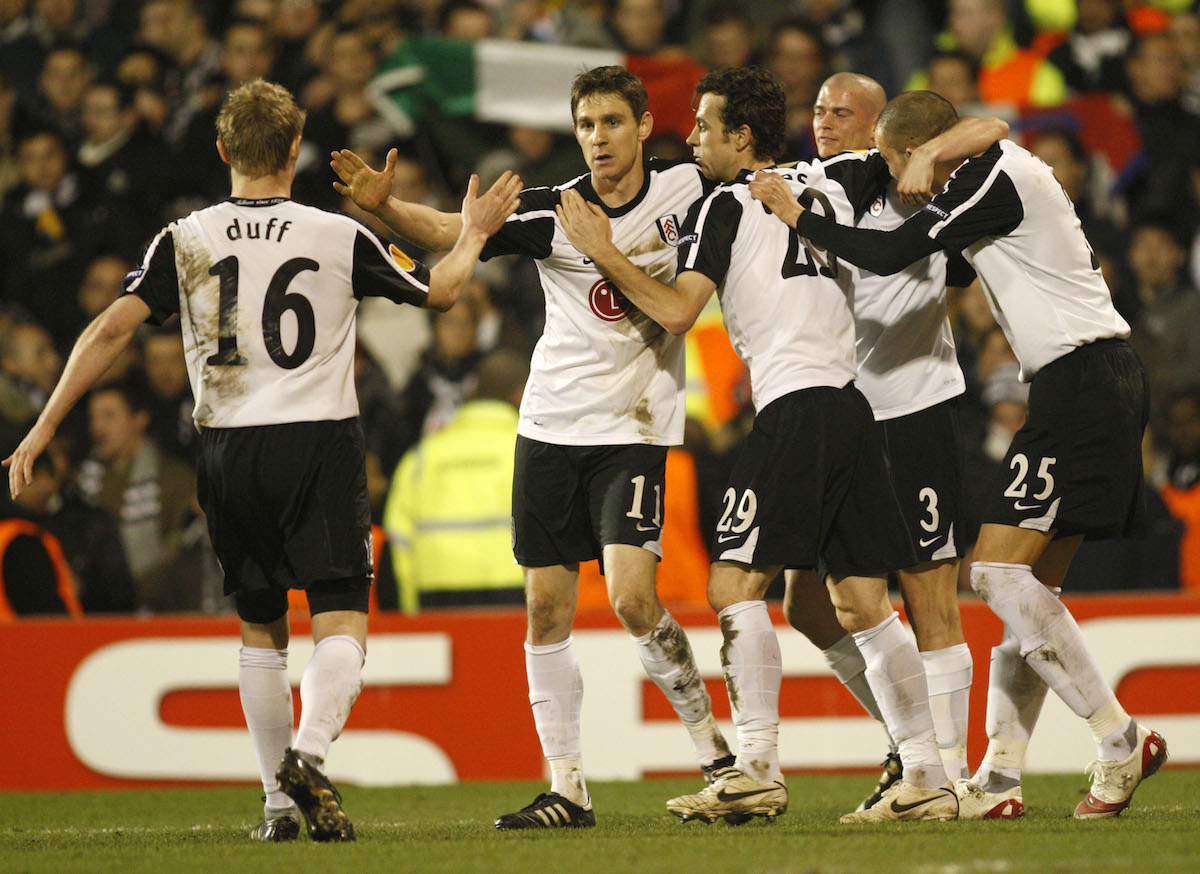 An already magical night was just one moment short of becoming one of the greatest upsets in the history of European competition. An opportunity for an instant club hero to emerge had been created, and Dempsey gladly took it with a 20-yard chip befitting of the occasion.

Euphoria erupted around SW6 as the Old Lady was dethroned. Fulham had overcome a team including Trezeguet, Cannavaro, and Mauro Camoranesi in the most spectacular fashion. Regardless of what else happened in the competition, Fulham’s heroes of 2009-10 were already amongst the club’s greatest.

Despite conceding late on, a 2-1 home win gave Fulham a great chance heading into the quarter-final second leg against German champions Wolfsburg. Zamora’s goal just 21 seconds into the crucial clash encapsulated everything about the nature of their journey, and the Cottagers held on to book their place in the last four of the competition – something even the die-hard Whites supporters could have scarcely imagined.

After a plucky 0-0 draw in Hamburg, the odds became stacked once more as Mladen Petric’s stunning free-kick gave the Germans the lead and a precious away goal, before Zamora was withdrawn through injury.

As had been the case throughout the heroic journey, though, the Cottagers found an extra gear, fighting back with two goals from Simon Davies and Gera in a brilliant seven-minute spell. 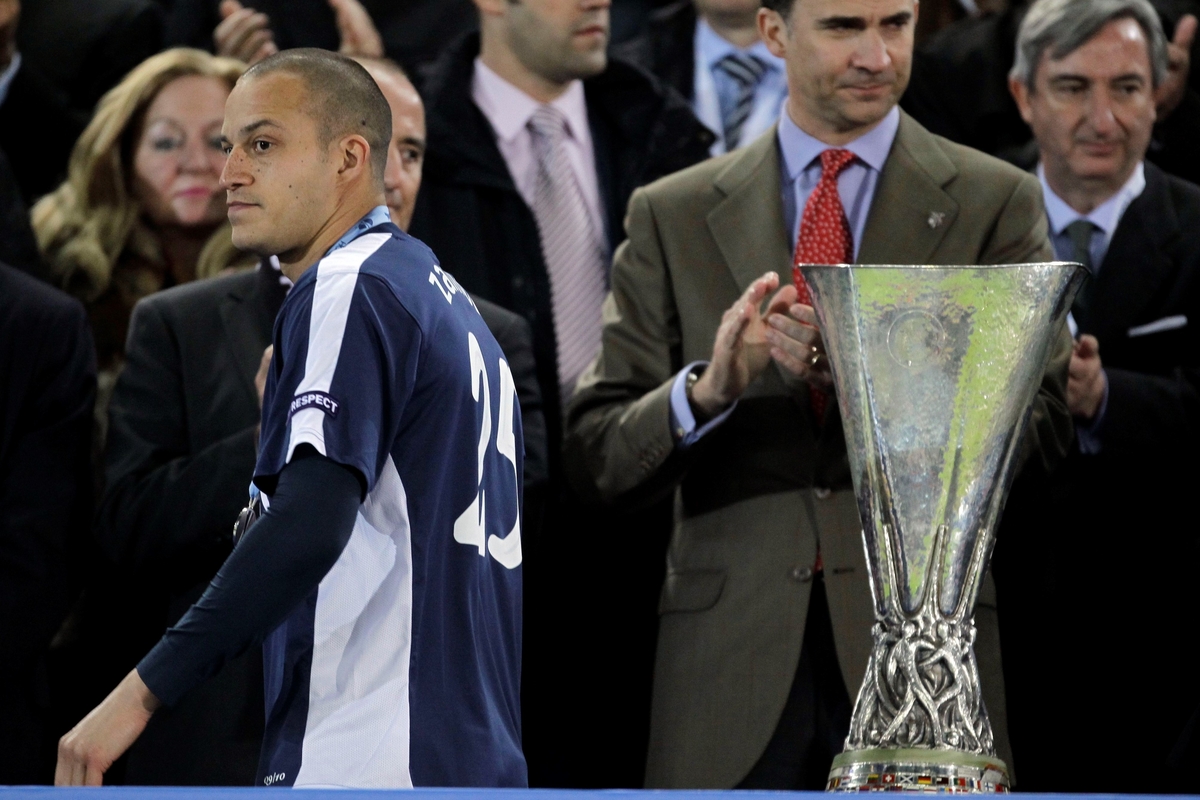 Following a nervy final 15 minutes, the last blast on Cuneyt Cakir’s whistle confirmed that the dream had become reality. Fulham were on the way back to Hamburg, only this time the Europa League trophy would be on offer.

Given the standard of opposition faced en route to the final, Fulham’s achievements were arguably even greater than those of Middlesbrough in 2005-06, which admittedly had its sharof drama along the way. Unfortunately for the Cottagers, they would repeat Boro’s fate by coming up short against Spanish opposition in the final. Worse still, they’d go agonisingly close too.

Fulham fought bravely against an immensely talented Atletico Madrid in Germany, with Davies’ volley cancelling out Diego Forlan’s opener to take the first ever Europa League final to extra time.

The extra quality of a team boasting David De Gea, Jose Antonio Reyes, Sergio Aguero, and Antonio Lopez showed in extra-time, though, as Forlan struck with just four minutes to play. Even the Cottagers, who had bounced back from adversity at every corner, were now beyond rescue.

The final whistle was met with heartbreak but Hodgson’s men could take great pride as they collected their runners-up medals, which symbolise just how close they came to completing one of the greatest underdog stories in the history of European competition.

Fulham waited 131 years for their first European cup final and, given their current predicament, it could be a long time before they even qualify for a fourth time in their history – their most recent continental campaign came in 2011-12, ending with a group stage exit. Nevertheless, the Cottagers will always have the memories of that season, and the win over Juventus, to eulogise over with pride.

If only they could have held on for penalties.