Over the last three years, Sassuolo have injected an air of refreshing cool into Serie A. Having never played in Italian football’s top flight before 2013, the club has risen year after year to new heights, following their own path and attracting admirers along the way. Unquestionably one of Europe’s hippest teams, they secured continental qualification last season with a sixth-place finish. And, with Europa League football on the horizon, more people will soon be learning to love the Neroverdi.

Rewind a decade and Sassuolo had just won promotion to Serie C1, the third tier of the Italian league structure, for the first time. Three years previously, in 2003, the club had been bought by Giorgio Squinzi, the owner of Mapei, a company whose primary activities revolve around the manufacture of building materials. That the team has since risen through the leagues under Squinzi’s ownership is no coincidence; investment from the new patron has been vital, though the club’s overarching model has been just as valuable, if not more so.

Astute coaching appointments have proven integral. In 2007, having just missed out on promotion to Serie B, Gian Marco Remondina left the club to take the reins at Piacenza. His replacement, Massimiliano Allegri, would lead them to the Serie C1/A title in his one and only term in charge before being appointed by Cagliari. Since then, Allegri has led AC Milan and Juventus, winning three scudetti and asserting himself as one of the finest managers in the world.

Allegri was succeeded by Andrea Mandorlini, the coach who led Hellas Verona’s temporary revival between 2010 and 2015, and then Stefano Pioli, who would later lead Lazio back into the Champions League. While both coaches would ensure Sassuolo stayed in and around the Serie B play-offs, Eusebio Di Francesco’s hiring in 2012 was the real game-changer.

Named after the iconic Portuguese striker, Di Francesco embodies everything that is good about Sassuolo. He has also been the inspiration behind the club’s progression from Serie B hopefuls to Serie A surprises. 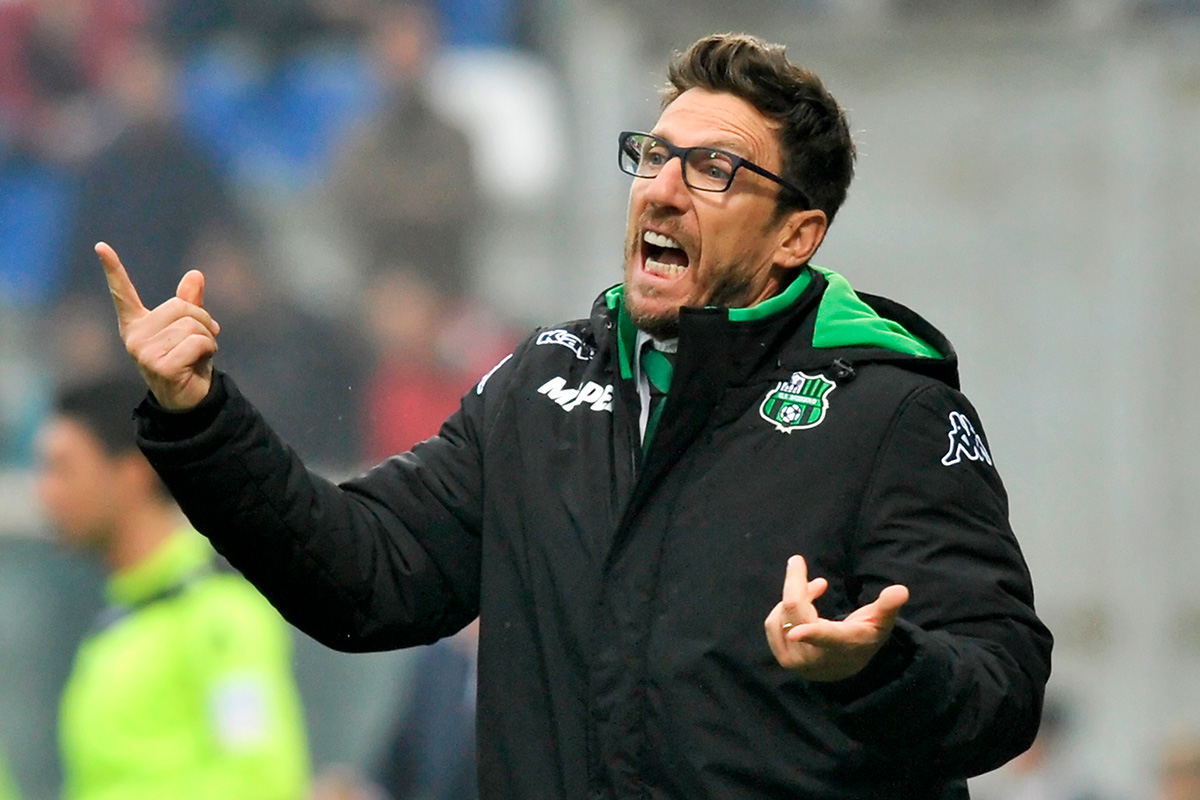 The 46-year-old is a bespectacled, well-groomed and sharply dressed purveyor of enterprising, attack-minded football. As a player his major influence was one of football’s great tactical hedonists, Zdenek Zeman, who coached him at Roma. And Di Francesco has carried some of Zeman’s tenets with him into his own coaching career, particularly the Czech’s belief that “possession is futile.”

“My football is about vertical passes, give and go, attacking the space,” Di Francesco told La Gazzetta dello Sport when discussing his philosophy. “I always tell the lads: two square passes are already too many.” He then talked about his favoured system, the 4-3-3, which was also utilised by Zeman. “There is only one problem with the 4-3-3,” he said. “Which is (that) you struggle to mark the opposition playmaker. For the rest, it’s spectacular. In training I never work on a second tactical system.”

Basing your football on Zeman is bold, essentially outing yourself as a footballing hipster. This fits Di Francesco nicely, and it also suits Sassuolo. His ideals have come hand-in-hand with results; in his first season he won Serie B and secured the club’s promotion to Serie A for the first time in their history, in his second he was reappointed after being dismissed and led the club to survival, in his third they finished in a comfortable mid-table position and last season they finished sixth.

Di Francesco has done a remarkable job on a reasonable budget – Sassuolo’s wage bill is about a quarter the size of Milan’s, while their net transfer spend in 2015-16 was just over £4 million. Ultimately, however, they relied on a favour from an old friend to ensure their place in Europe for this season.

Despite owning Sassuolo, Squinzi is, quite openly, a Milan fan. Indeed he has a red and black iPhone cover and, when asked who he would support if the team he owned ever met his beloved Rossoneri, he replied, “I’d support Milan.” He changed his mind on that when the two teams finally did clash in 2014, perhaps wisely as Sassuolo have since won four of their six league encounters against the more illustrious side.

The clubs’ most recent meeting in March, which ended in a 2-0 win for Di Francesco’s men, kick-started a period of crisis for Milan, as they won just two of their remaining ten Serie A fixtures to blow a top-six spot. Sassuolo gratefully took their place, but Milan made it through a relatively easy Coppa Italia draw to reach the final, where victory would render sixth-place in the league null and void as far as European qualification was concerned. However, in the final they met a Juventus outfit managed by former Sassuolo coach Allegri. Juventus won, and Sassuolo’s Europa League spot was confirmed. 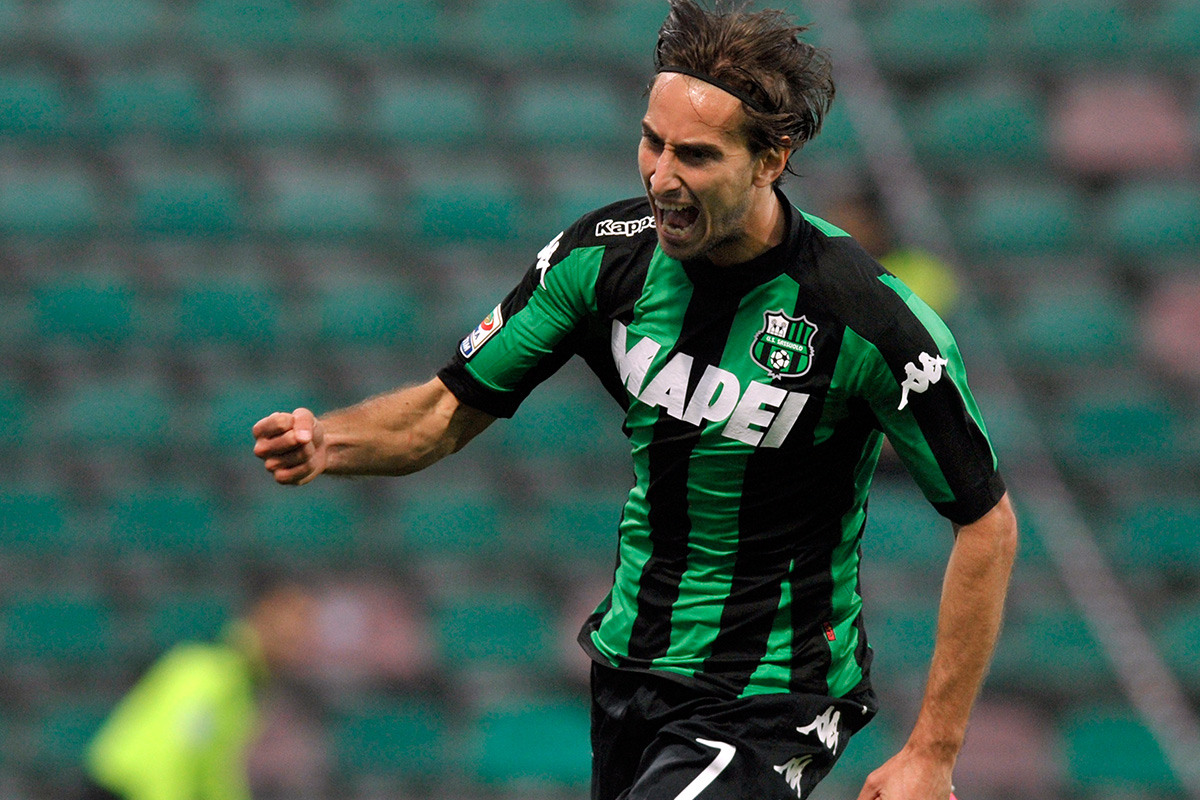 As far as most people in Italian football were concerned, the result was just. In complete contrast to Milan, Sassuolo are a well-run club intent on sustainable success. Their progress into continental competition is simply the latest step on a path that was put in place several years ago, something that has involved developing from within, focusing on young players and playing vibrant offensive football.

There are still remnants of Sassuolo’s past in the current lineup. Domenico Berardi is only 21 years old but already has 134 appearances to his name having broken into the first team in the promotion campaign of 2012-13. He has since scored 36 goals in Serie A and has attracted attention from some of the biggest clubs in Italy and abroad. While the young winger is the star, the heartbeat is Francesco Magnanelli, a grizzled 31-year-old regista who joined the club in 2005, while they were still in Serie C2. More than some relic of the past, however, he is pivotal to the team’s play; his positional awareness and passing range fundamental to the Sassuolo style.

Di Francesco has been continuously linked to bigger jobs with bigger budgets, but for the time being he’s staying where he is. Responding to speculation linking him to Milan, the coach said, “(I go) where there’s no confusion, and I think Sassuolo are one of the best in Italy from that point of view.” Within a month he extended his contract with the club until 2019.

Between their football, their vision, their green-and-black striped shirt and their rock ballad official club song by renowned musician Nek, there is very little to dislike about Sassuolo, and soon their cool will be infecting the hearts of fans outside of Italy. Their rise has been fast and, at the present moment, shows no sign of stopping.