The 1992 European Cup final was Barcelona’s European Cup final. For the first time in their long and storied history after bitter near misses in the past, the Catalan giants finally held aloft the continent’s most prestigious trophy. Having been formed in 1899, it required Johann Cruyff’s ‘Dream Team’ of Ronald Koeman, Pep Guardiola, Michael Laudrup and Hristo Stoichkov to break the longstanding curse at Wembley. But, while the night of 20 May 1992 belonged to the Blaugrana, one of the most iconic clubs in the world who for so long have been regarded as mes que un club, it was so nearly a completely different story.

For that night also, in a smaller way, belonged to Sampdoria, a club who weren’t, and aren’t, even considered the traditional side in their own city of Genova in northwest Italy. Sampdoria were formed through a merger of Andrea Doria and Sampierdarenese on 12 August 1946, more than half a decade after local rivals Genoa Cricket and Football Club were established. The merger led to the foundation of a new power in calcio, as well as a stunningly resonant kit that combined the blue shirt of Andrea Doria with the white, red and black midsection of Sampierdarenese.

The merger also led to the creation of a club who, just 46 years later, stood 90 minutes away from beating Barcelona to a maiden European Cup.

Paolo Mantovani was no ordinary club patron. Having made his money trading oil during the energy crisis of the 1970s, he became a press secretary at Sampdoria before buying the club on 3 July 1979. Yet, while Italian football presidents are typically renowned for their cruelty, caprice and corruptibility, he handled club affairs with an old-fashioned class. Three years after his arrival, Sampdoria were promoted to Serie A and an exciting new era was born. 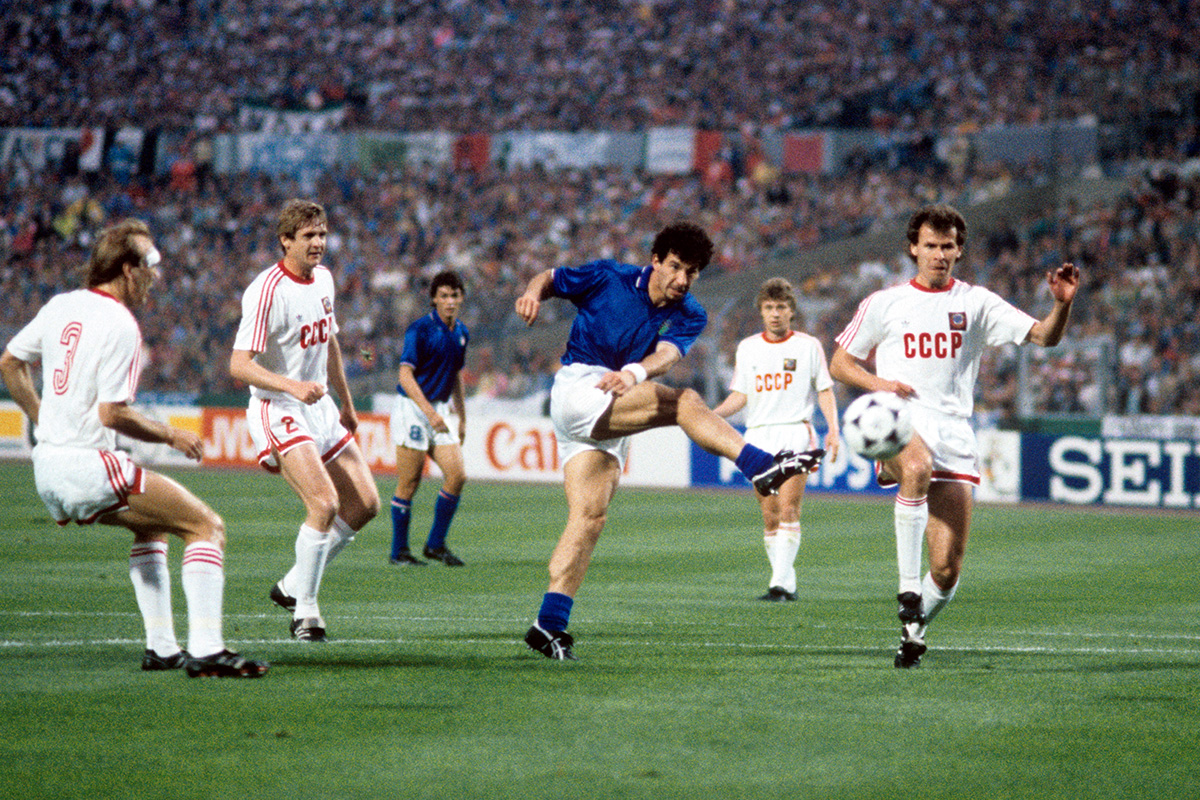 Investing money into the squad, one of the most important early signings Mantovani made was that of a 20-year-old striker from Cremona. Gianluca Vialli would later go onto make his name with Juventus and Chelsea, but it was with Sampdoria that he grew from prospect to star. And, in he and Gabriele Marcotti’s informative book on the cultural differences between Italian and English football, ‘The Italian Job’, he was full of praise for his old employer. “Without question there are few chairmen left like the late Paolo Mantovani,” he wrote. “He was the classic father-figure chairman, a throwback to another era. He loved the club and saw players, coaches, fans, the media as members of an extended family.”

Mantovani preferred to treat the business of his football club in a personal manner, with more informal negotiations and looser, short-term contractual agreements that, while risky for both player and club, facilitated a closer bond between the two parties. “One of my teammates, Luca Pellegrini, became the first Sampdoria player … to be represented by an agent, a local lawyer. When Mantovani saw that Pellegrini had shown up with another man, he said, ‘Pardon me, but who is this gentleman?’ ‘He’s my lawyer…,’ Pellegrini replied. ‘I see,’ said Mantovani, getting up to leave. ‘In that case, I am going to have to ask you to return in a few days so that I can have my lawyer present. In my experience, lawyers should talk to other lawyers.’”

Vialli’s writing gives an insight into the unusual approach Mantovani took, one built upon forging relationships with players as opposed to treating them strictly as commodities to be bought and sold as if stocks and shares. As the football world around Sampdoria began to change, they were being led by a man of old school beliefs.

Yet, while Mantovani’s negotiations were wonderfully quirky, they were also effective in bringing in talent. Through the late 1980s, he assembled the strongest squad in the Blucerchiati’s history thanks to his investment and the scouting of then-director of sport Paolo Borea. In came a teenage forward by the name of Roberto Mancini from Bologna, 21-year-old goalkeeper Gianluca Pagliuca from the same club, 22-year-old right-back Moreno Mannini from Como and 23-year-old winger Attilio Lombardo who, like Vialli, arrived from Cremonese.

Those youngsters, alongside more experienced additions such as tenacious centre-back Pietro Vierchowod and Brazilian playmaker Toninho Cerezo from Roma, the versatile Fausto Pari from Parma and Srecko Katanec from German Bundesliga outfit Stuttgart, integrated under the astute leadership of head coach Vujadin Boskov to become one of the finest sides in Serie A. 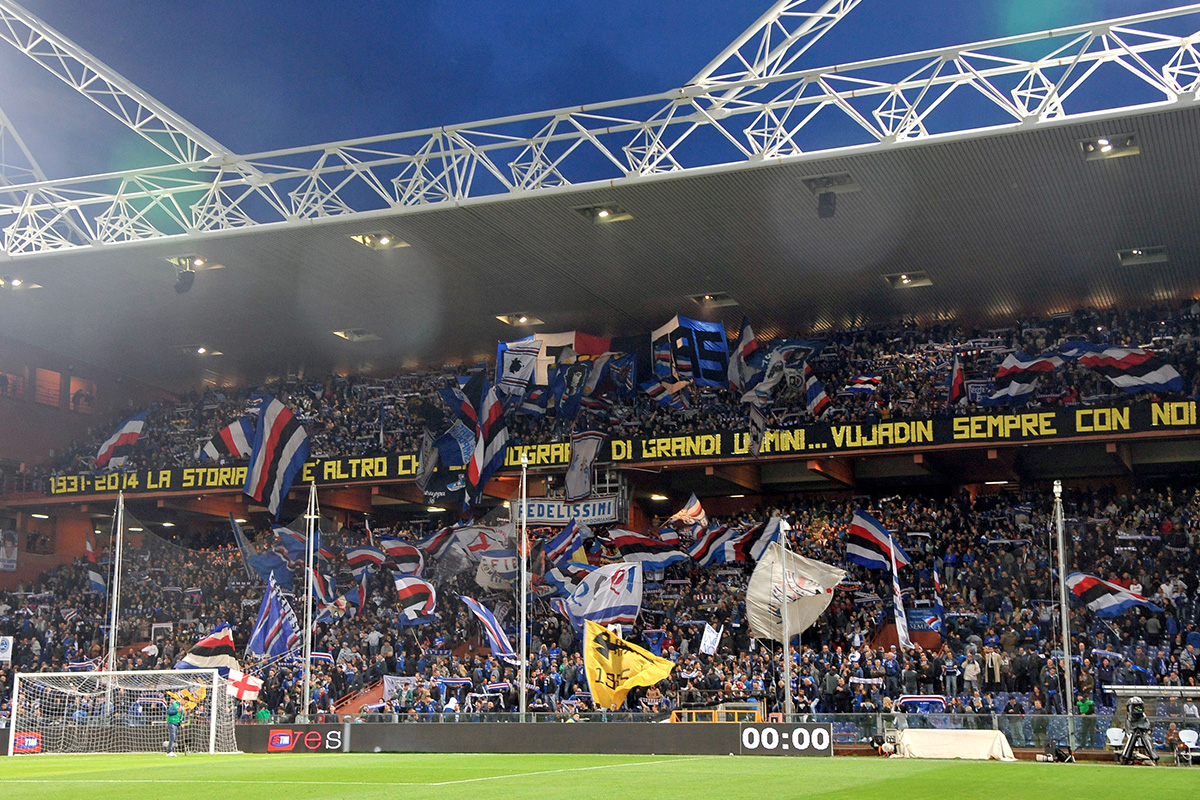 Boskov is remembered mostly for his delightfully weird post-match statements, which ranged from the amusing – “If I untied my dog, he would play better than [Genoa midfielder Jose] Perdomo,” to the seemingly banal – “The match finishes when the referee whistles,” but he was also an astute tactician and a positive leader.

A left-half as a player, he spent some time with Sampdoria toward the end of his on-pitch career before trying his hand at coaching, where he would enjoy spells in charge of the Yugoslavian national team, Feyenoord and Real Madrid before returning to Genova in 1986 to take the Blucerchiati reins from Eugenio Bersellini.

In his first season at the helm, Sampdoria finished a highly respectable sixth. His second term saw an improved fourth-place finish, as well as the club’s second-ever Coppa Italia victory, courtesy of a 3-2 aggregate victory over Torino in the final. A second successive cup win followed in 1989 with a 4-0 thrashing of Diego Maradona’s Napoli, though Boskov’s side lost in the European Cup Winners’ Cup final to Barcelona. They would eventually win this knockout competition the following season, however, before winning a historic first and only Scudetto in 1991.

That sensational campaign began with a nine-match unbeaten streak which included noteworthy away wins over AC Milan and Napoli before a 2-1 defeat to city rivals Genoa in the Derby della Lanterna restored a painful sense of realism. Sampdoria then took just eight points from their next six fixtures, a run that finished with two consecutive defeats to Torino and Lecce.

A title tilt didn’t seem on the cards at that point, but a remarkable return to form saw Vialli, Mancini and co. surge beyond their rivals in the second half of the season. Winning 12 and drawing six of their final 18 matches, they finished five points clear of Milan and Inter. And, with 19 goals to his name, Vialli, adopted son of Mantovani and symbol of Sampdoria’s incredible journey, won the Capocannoniere.

Fans of the club probably couldn’t have imagined anything more than a Scudetto, but, watching their team eliminate Red Star Belgrade, Anderlecht and Panathinaikos on route to a European Cup final the next year, they would have been forgiven for daring to dream bigger. Unfortunately, just as a Koeman free-kick gave Barcelona the trophy they had coveted for so long, it also took away the silverware Sampdoria had never honestly considered winning.

Boskov left later that year, while Mantovani passed away in 1993 to be replaced as president by his son Enrico. The spine of the team – Pagliuca, Vierchowod, Cerezo, Vialli and Mancini – moved on and, while other talented individuals came in, the great team could not be replicated. Sampdoria had risen as far as they could and a slow decline set in. This non-traditional outfit from the birthplace of calcio who had threatened, albeit briefly, to become kings of their continent, would resume their place in the domestic hierarchy.