“He’s is a kid who had an important season last year in Serie B,” Gian Piero Gasperini told reporters.

“This year when he joined up with us, we saw immediately that he had quality.”

It was early September and the Atalanta Coach was discussing the play of Franck Kessié in his side’s 2-1 victory over Torino. The young midfielder had bagged the winning goal from the penalty spot and continued his fine run of scoring form, but those who watched that performance at the Stadio Atleti Azzurri d’Italia could not fail to see so much more.

Led by Siniša Mihajlović, the visitors have enjoyed a fine campaign of their own thus far, with Joe Hart and Andrea Belotti writing the headlines as they battle to return to the Europa League. Yet behind the in-from striker is a hardworking and quality-laden midfield, with Mirko Valdifiori, Daniele Baselli and captain Marco Benassi forming an excellent unit. Kessié outplayed them all.

As the FourFourTwo Stats Zone graphic below highlights, the 19-year-old won one tackle, made one interception and recovered the ball a game-high nine times. With Torino dominating possession, Kessié helped maintain Atalanta’s swift counter-attacking style, connecting with 79.2% of his passes and creating one clear scoring chance for a team-mate. 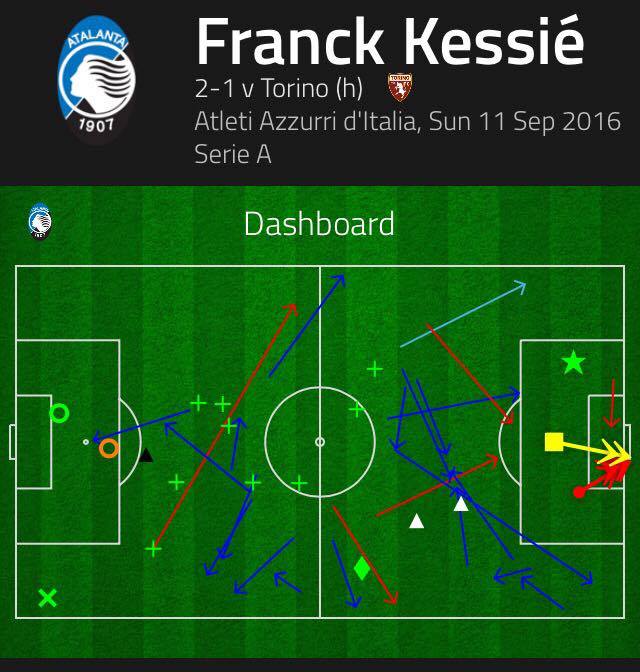 While clearly remembering his defensive duties, he burst forward at every opportunity and tested Hart with some powerful shots. Completing his one take-on attempt, he also showed some impressive technique, and richly deserved a goal that took his 2016/17 tally to four in just three Serie A appearances.

Arriving at Atalanta in January 2015, Kessié had already represented the full Ivory Coast international team and captained their Under-17 side to the quarterfinals of the World Cup two years earlier. Yet the coaching staff of the Bergamo-based club believed the talented starlet needed more time to develop and sent him into the youth sector where he made seven appearances for the Primavera (U-19) side.

Before the end of the season he was an unused substitute in a single first team game before being sent on loan to Serie B side Cesena. There, highly respected Coach Massimo Drago assessed the central defender and decided his qualities would be better suited to a more advanced role, throwing him into midfield and asking him to shield the backline.

Playing almost every game, Kessié flourished in the role and showed all the attributes necessary to thrive there, returning to Atalanta a much-improved player from the one who departed twelve months earlier. The start of this season saw the side struggle, losing four of their opening five matches, yet the Ivorian still shone, drawing interest from Juventus, Arsenal and Manchester City, while Liverpool are believed to have recently made a €22 million bid for his signature.

It is not difficult to understand why. The obvious comparisons to Yaya Toure have been made, Kessié’s size, strength and stamina clearly reminiscent of his famous compatriot, shrugging off would-be challengers as he surges forward confidently. Yet he also moves quickly and is remarkably skilful, successful with 75% of the take-ons he has attempted thus far, while his shooting is also excellent, netting five times from just 19 attempts on goal..

His passing has taken a major leap forward over the last year, now connecting with 84% of his attempts to make almost 50 passes per game and creating a solid twelve clear scoring chances for his Atalanta team-mates. Yet as composed as he is in possession, those clubs casting admiring glances in his direction cannot fail to be impressed by his understanding of movement and his knack for anticipating what both his fellow Atalanta players and opponents will do next.

If that helps him unlock defences, Kessié’s intelligence, defensive diligence and tactical awareness undoubtedly make him a truly well-rounded player. He tracks his man deep into his own half as part the high-pressing style Gasperini has made his trademark, helping to win back the ball in dangerous positions. He has averaged 1.4 tackles and 1.2 interceptions per game, but his physicality and presence often forces opponents into mistakes that do not show up in statistics, causing turnovers with incredible regularity.

Big games have often not deterred him either, scoring in a win over AS Roma and helping Atalanta notch impressive victories over Inter and Sassuolo. They now sit sixth in Serie A, looking to recover from losses to Juventus and Udinese in their last two outings, with the first of those games underlining the raw aspects of Kessié’s play.

The Bianconeri were able to negate his usual impact, exposing the flaws he must work on in the weeks ahead. “The only thing that interests me at the moment is learning as much as possible from Gasperini,” he told Sky Italia recently, insisting that Italy is the best place for a young player to hone his skills.

If he does, then the asking price will only rise and the list of suitors will grow longer, but that has always been how Atalanta operate. Known as “Regina delle Provinciali” — the Queen of the Provinces — the club have delivered some truly astonishing talent from their thoroughly excellent youth system. If he moves on to become a genuine star, Franck Kessié will simply be following in the footsteps of Gaetano Scirea, Roberto Donadoni and many others who have left Bergamo and conquered the world.