Since being spotted by Real Sociedad scout, Eric Olhats, as a 14-year-old back in 2005, Antoine Griezmann, a player who'd been persistently written off and overlooked due to his diminutive stature, has embarked on a spectacular upward trajectory. So much so that ahead of Atletico Madrid‘s Champions League final decider against Real Madrid, Diego Simeone, his dogged manager, even now claims he's “among the three best players in the world”.

It's quite astonishing to look back and recollect that the likes of Sochaux, Saint-Etienne, Montpellier, Metz, Lyon and Auxerre all passed on the now superstar Frenchman. Their loss was unquestionably Real Sociedad's gain, however, for their scout in charge of identifying French starlets, Olhats, had no hesitation in wanting to bring the wiry teen to San Sebastian. After arriving back in France following a holiday in Argentina, some of Olhats' colleagues invited him to come down and watch a youth tournament in Paris. Olhats duly took up their offer and went to the tournament more so to see his friends than in an official working capacity.

“I fell for his technical skills,” Olhats explained to the Bleacher Report. “His technique may still be improving, but the talent that I saw that day was intuitive.”

Having been wowed by Griezmann, who was actually trialing for Montpellier, Olhats knew he had to get the prodigy to Real Sociedad. And after going through all the right channels and convincing his parents, Griezmann was off to La Real to start the next chapter of his incredible football journey.

Griezmann lived with Olhats and commuted with him an hour by car to training every day. The youngster suffered and eventually conquered his initial homesickness, with this serving as a key cornerstone in building up the required mental fortitude he'd need to overcome the many challenges he'd inevitably be confronted with in football. His desire to succeed was strong. And succeed he did.

After four years of toiling away and honing his craft in the club's academy and reserve teams, he would finally be called up by Uruguayan coach Martin Lasarte to make his first team debut. On September the 2nd of 2009, Griezmann debuted against Rayo Vallecano in the Copa del Rey and then, just four days later, made his La Liga bow vs. Real Murcia. Indeed, even though this was just the beginning of his professional career, these were well deserved rewards for his all his hard work, both on and off the pitch.

Lasarte spoke highly of Griezmann's eagerness to digest everything he was told in order to improve his game, saying: “Antoine wanted to play as an attacking left midfielder, and he was always alert in training,” Lasarte told So Foot Club.

“He asked questions and always wanted to learn. We watched videos together and talked about the details of his game. We wanted to polish this diamond.”

In that 2009/2010 campaign, the electric attacker's six goals and slew of encouraging performances in the Segunda Division saw him play a vital role in his club winning the division and inherent promotion to La Liga.

Running out for his first Spanish top flight fixture was described as “fulfilling his childhood dream” by the French hotshot, and he didn't waste any time in making a name for himself thereafter. In the 2010/2011 season, the fact he started 34 of his team's 38 league matches beautifully illustrated how highly rated he was by the club and how well his development was going.

With fellow countryman, Philippe Montanier, being appointed manager ahead of the 2011/2012 season, Griezmann continued his impressive rate of progression, producing plenty of glimpses of his immense talent throughout the season.

To ensure their passage into the Champions League group stage, Sociedad faced a play-off against Lyon, a particularly meaningful tie for Griezmann who'd been rejected by Les Gones as a youth, and as they were also the team he supported as a boy. Griezmann and his teammates made Lyon rue that decision. The boy born 80km from the city scored a magnificent bicycle kick in the away leg, as La Real comprehensively brushed aside the French giants 4-0 on aggregate. Their passage secured in unmistakable style.

The speedster would go on to have a brilliant 2013/2014 season, wreaking havoc on defences across the country with his wicked blend of technique, pace, intelligent movement and finishing ability ensuring he was a hugely challenging proposition for any defensive unit to handle.

While this was a season where Griezmann truly came of age and announced himself on the elite level, as demonstrated by his excellent 16 league goals and three assists that term, his inability to score in his team's six Champions League fixtures showed he still needed to grow. 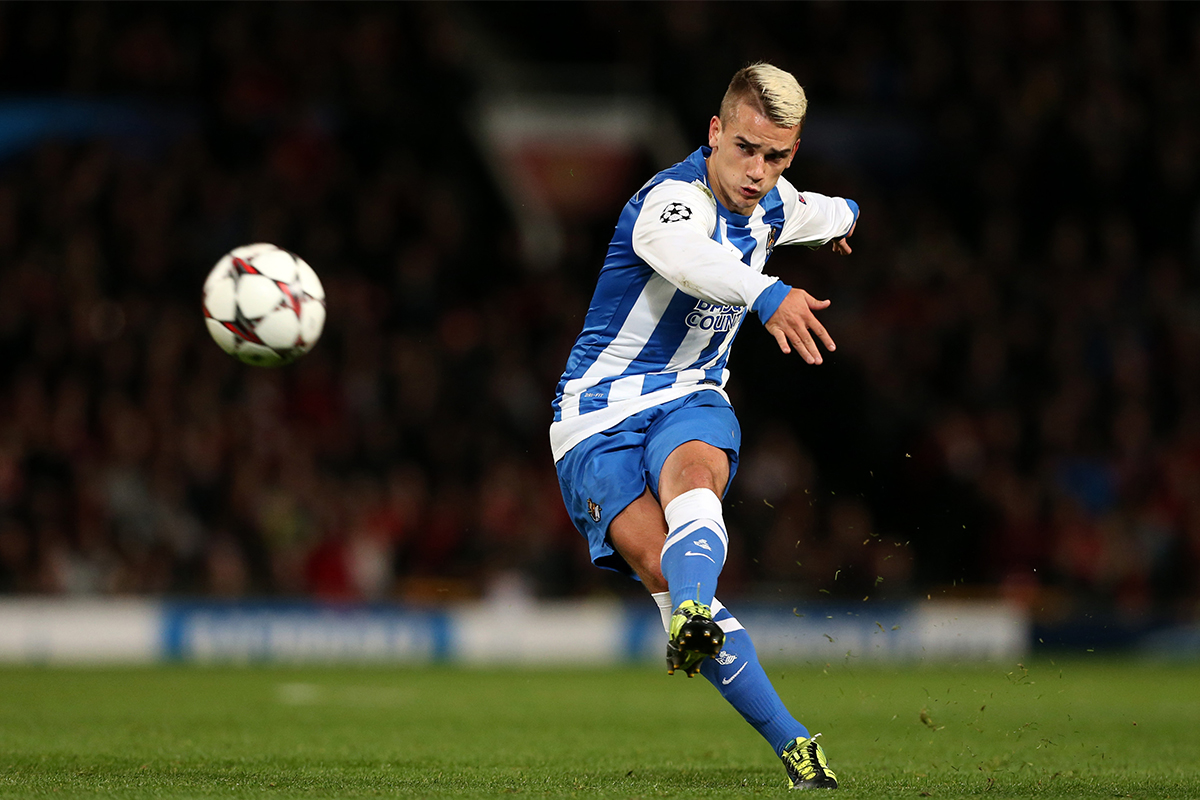 But with time and vital experience, he's done precisely that since joining Diego Simeone's fantastically coached Atletico Madrid side for a whopping €30 million in 2014.

When his ex manager at La Real, Montanier, was quizzed on what the biggest improvements to Griezmann's game had been following his move to the capital, his response couldn't have been more spot on. “His consistently high level of output. With La Real he was able to be bright but not in every game,” he recalled.

“Sometimes Antoine could disappear, but now in Madrid, he is almost always every week maintaining a very high level. And that is not easy in an important team like Atletico and in competitions like the Champions League.

“There are many players who can be decisive in five or ten games a season but Antoine does in twenty or twenty-five. This is the difference between good and great. Therefore we can say that Griezmann is now a great player.”

A standout, record breaking season was enjoyed by Griezmann in his first year at Los Rojiblancos, where he bagged an inspirational 22 goals, a number that saw him become the highest scoring Frenchman in a single La Liga campaign, and surpass Karim Benzema's previous mark of 21.

It's been fascinating to watch his game further develop under Simeone's expert tutelage, for he's added aggression, intensity, defensive acuity, versatility and an unrelenting, tireless work ethic into his already multifaceted armoury. It's little wonder the current version of Griezmann is considered one of the finest footballers on the planet. Put simply, he's just so complete, ostensibly bereft of weaknesses, and so unbelievably good.

“It's through hard work, great effort and listening. The key to life is listening, and he's done that. He suffered and improved, and today he's among the three best players in the world,” recently stated Simeone.

Capable of playing up front, out wide and in a sort of hybrid 9 and a half position has seen him give Simeone plenty of tactical flexibility as to how best to use him according to the opposition Atletico's confronted with. His 32 goals in 55 appearances in all competitions this season, numbers that are nothing short of exceptional, accentuate what an integral component of the Mattress Makers squad he's been.

The durable superstar, who's remarkably played the majority of minutes for Sociedad and Atletico over the past six years, has a massive couple of months ahead to complete a superlative season, with both club and country. The upcoming European Championships in his homeland will see him be one of Didier Deschamps' key individuals in their quest for glory. “He is very efficient, he scores a lot of goals and he creates goals too,” mused Deschamps.

“He can play anywhere across the attack, even if he is more effective down the flanks. He’s technically sound, brings a lot of energy to the game and is very mobile.” 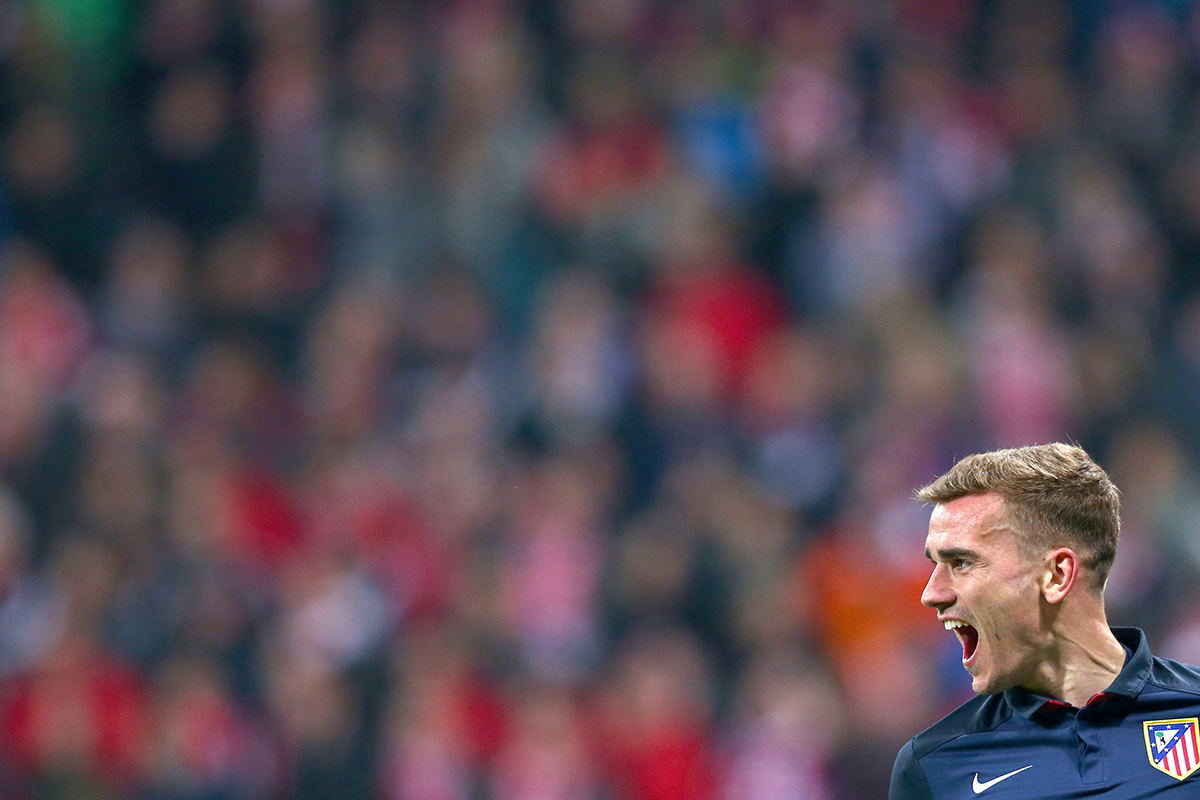 But first, Atleti's enormous Champions League final clash against Los Merengues awaits this weekend, a rematch of the 2014 final, for Griezmann and his colleagues. Personally, the 25-year-old can't wait, saying: “I've had a great season and hopefully it'll end on a high note. I'm brimming with confidence, I feel good out on the pitch and have faith in the team to produce a great performance in the final.

“It's important to score in the Champions League and to raise your game to the next level, and I've been able to do that.

He then added: “We're going to be ready. We'll remain focused every second of every minute, and give our all like always. We'll run our socks off, look to win the ball back by pressing high, and try to get the first goal. We'll have to be strong both mentally and physically.

“It'd be a dream come true, and I hope I get the chance to lift the trophy. I know it will take a lot of hard work and effort, but we are ready and willing, and we'll do everything we can to win it.”

You can certainly guarantee this extraordinarily gifted Frenchman will be doing everything in his power to ensure his team run out triumphant this time around. His desire, commitment and unbelievable talent will see to it.