Liverpool’s inability to defend aerial balls came back to haunt them yet again as their 1-1 draw with Burnley made it three matches without a win.

The Reds may only be five games into a 38-match league season but they're already five points behind joint leaders Manchester United and Manchester City, as well as having conceded seven goals more than the Manchester neighbours.

Jürgen Klopp's side are having no issues going forward and are on course, at their current rate of scoring, to finish the season with close to 70 goals, which more often than not puts you in contention for a top five finish.

The more often those four play together the more likely it is the Reds’ goals-for column reads closer to 90 come May.

The quartet will no doubt paper over the team’s defensive frailties from time to time but sooner or later a balance has to be struck because right now Liverpool's defensive set-up, yet again, is undoing all of the good work the team have done when going forward.

Their struggles when defending set pieces are well documented. Klopp’s men continue to concede the same chance near enough every week. A corner is floated in, Simon Mignolet is glued to his line and the opposition get a free run on those defending their zones before heading the ball home from six-yards out.

Burnley could have stolen all three points late on when Ben Mee was thwarted twice. How Mee, a powerful centre-back in the air, was able to get two relatively free headers in the penalty area is concerning, as shown in the images below. But he managed it. 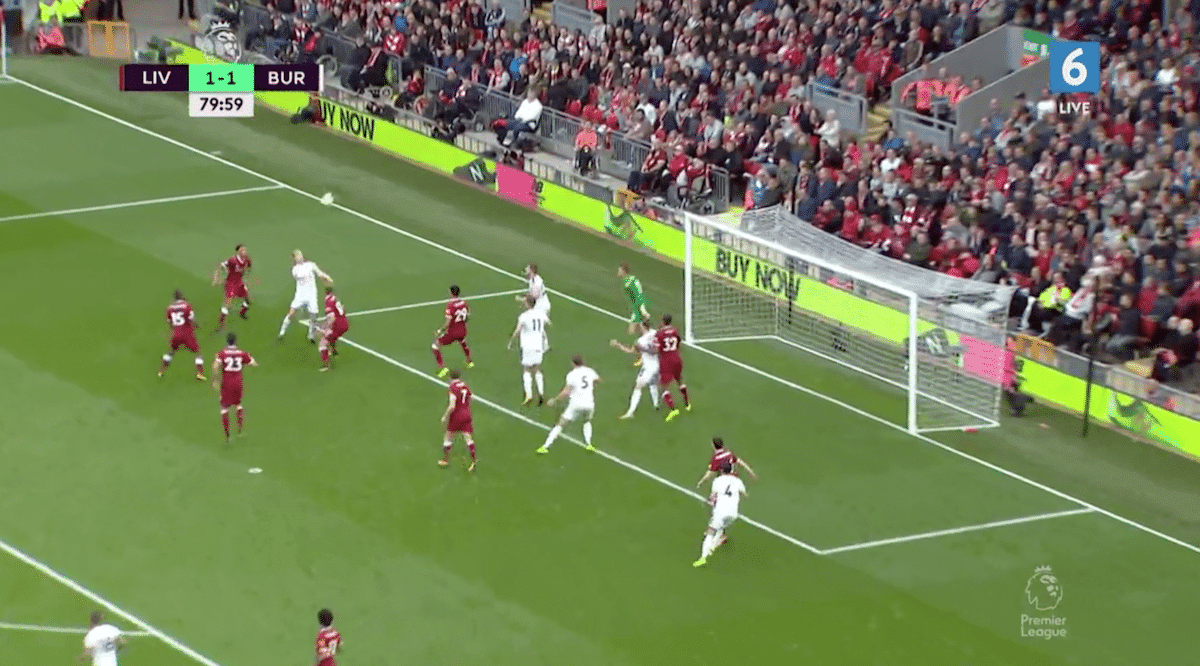 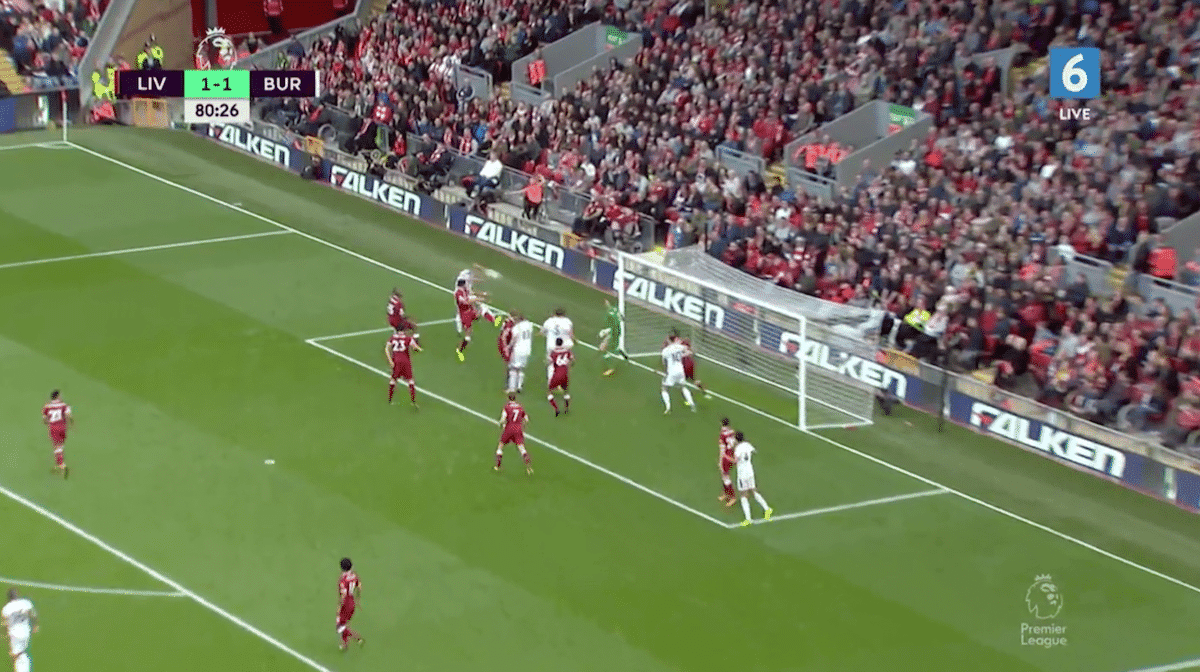 Fortunately for Liverpool, Joel Matip was able to clear off the line the first time before Mignolet saved smartly to clear the ball when it looked as though Burnley had snatched a winner.

This isn't news, though. However, it's becoming evident that Liverpool are just as bad aerially in open play situations. Against Man City in the 5-0 drubbing Gabriel Jesus twice found himself free in the penalty area to nod home.

The first was ruled out for offside but City didn't pass up the second opportunity. Kevin de Bruyne floated in a delicious cross and the Brazilian was there to fire home, which you can see in the picture below. Had he missed, though, David Silva was arriving unmarked and would have had a tap in. 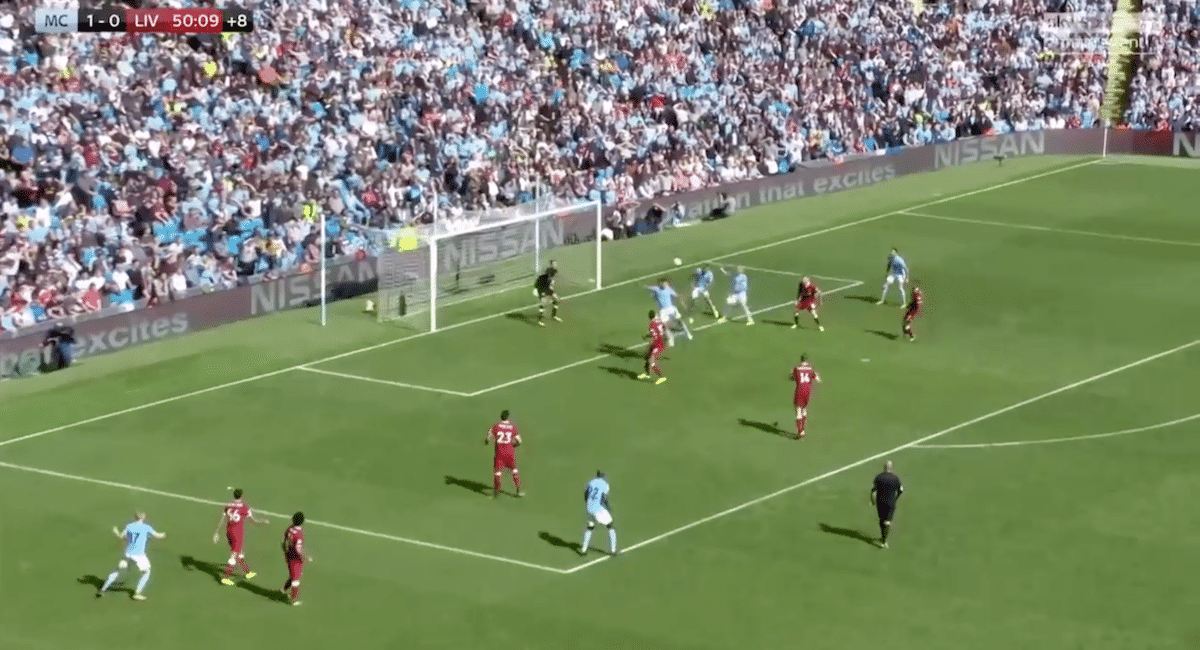 The Reds didn't track the runners from deep or position themselves to deal with the ball into the area.

It was similar against Sevilla, too. Wissam Ben Yedder fired home after Dejan Lovren failed to clear at the near post but in the build up to that goal, Liverpool were unable to stop a cross from coming into the area and then the headed clearance away didn't really clear the ball. Joe Gomez knocked it to the edge of the area and Sevilla had men there to keep the pressure on the Liverpool backline.

There's a theme starting to appear when the goals conceded are analysed.

It's easy to look at how poorly the centre-backs cope with crosses into the area but there should be questions being asked as to why the the Reds aren't stopping the opposition from putting the ball into dangerous areas.

Players aren't quick enough to close men down and they're not being intelligent when attempting to do so.

Gabriel Jesus' goal is almost a carbon copy of the one Sandro Wagner scored against Liverpool in the Champions League. 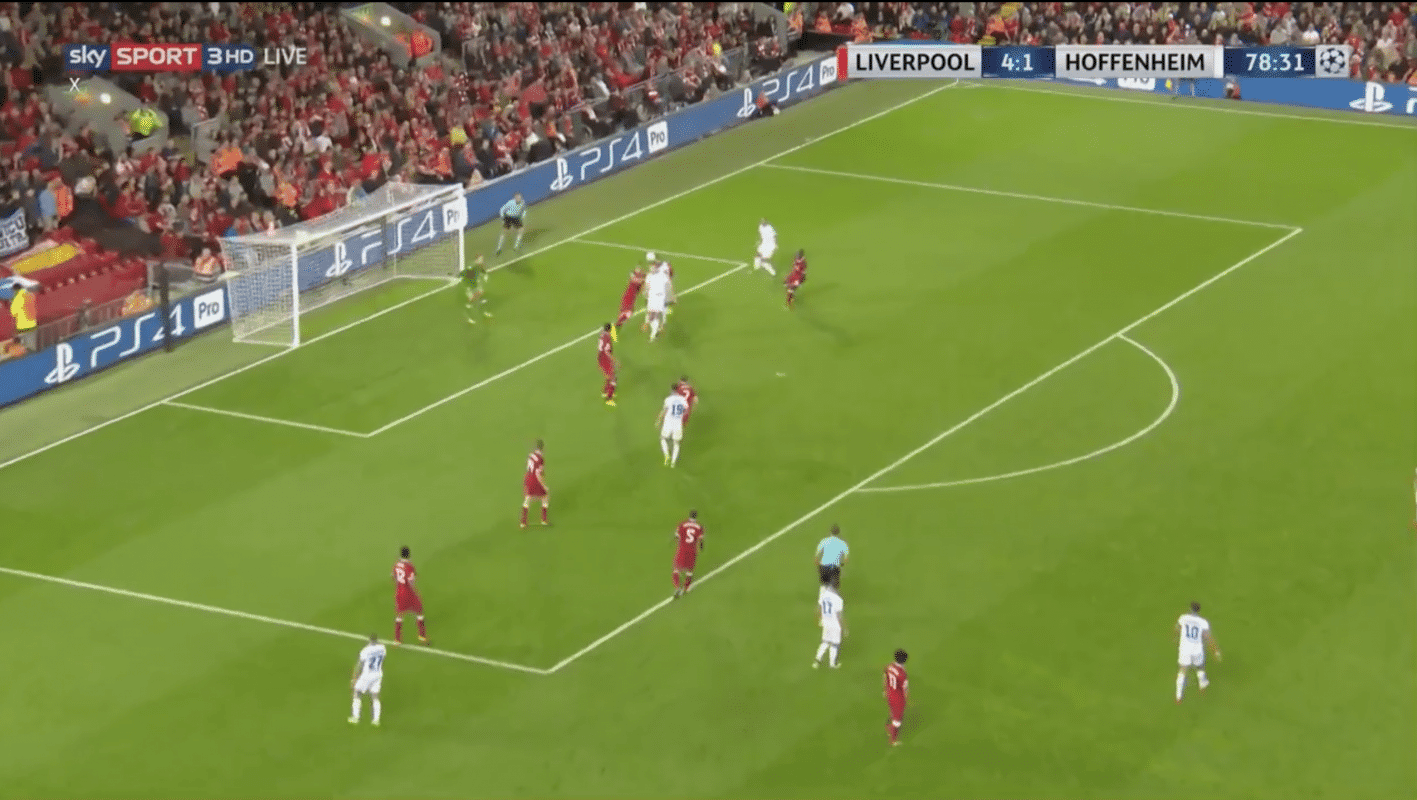 Andrej Kramaric is able to turn back onto his favoured right foot and whip the ball into the penalty area, just like de Bruyne was. The Liverpool players should be forcing them onto their weaker foot.

Burnley's goal on Saturday doesn't look identical to this but it's similar in a lot of ways.

The goal arrived after  a long ball over the top was won in the air by Robbie Brady, both Liverpool centre-backs failed to manoeuvre Chris Wood away from the ball and the striker was able to cushion it into the path of Scott Arfield who fired home. 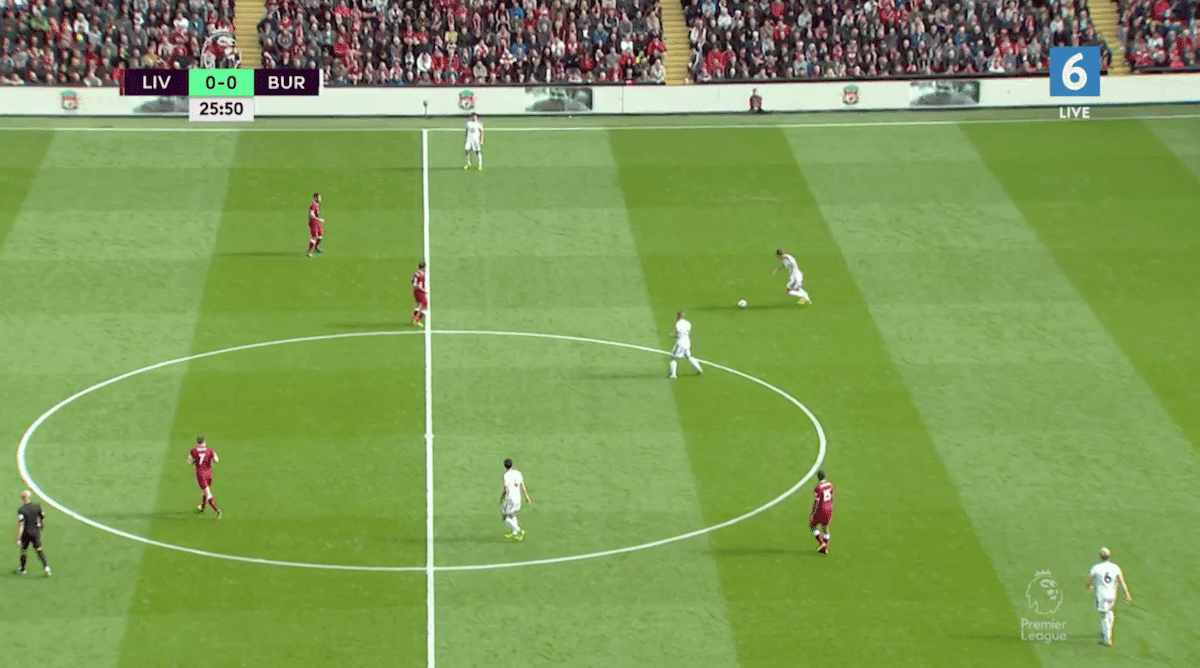 Just like against Sevilla, Man City and Hoffenheim, Liverpool fail to put pressure on the opposition and prevent them from doing what they want. In the picture above you see James Tarkowski in possession.

Burnley are renowned for playing long balls. While Liverpool press to get further forward, the Clarets simply put the ball forward and support their attackers. It's just what they do. To not allow them to play accurate long balls the way they want, you need to press high and force them into more erratic clearances.

It's a less controlled approach and there's more chance of turning the ball over and regaining possession. Liverpool don't do that. Instead they stand off the away side and allow Tarkowski to pick his pass. 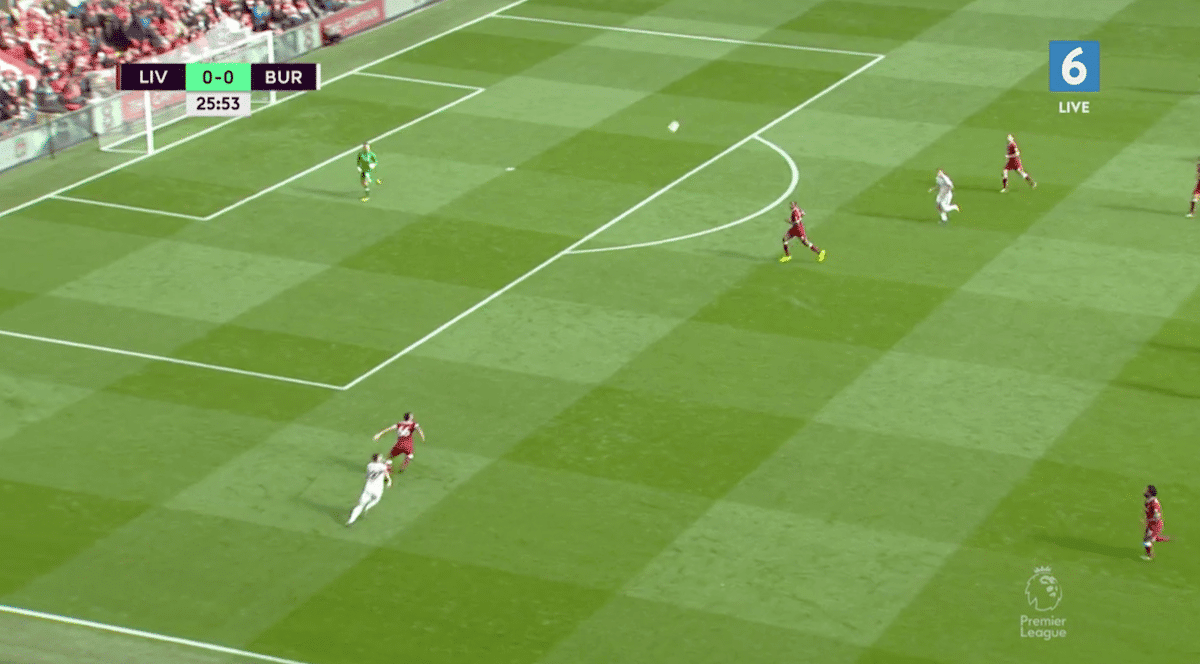 He goes long looking for Robbie Brady who is isolated against Trent Alexander-Arnold. The Burnley man may only be slightly taller than the Liverpool right-back but he has a run on him which puts this duel in his favour. The Irishman wins it and Burnley make something out of nothing.

Matip gets caught under the ball, Ragnar Klavan attempts to cover his centre-back partner but ends up getting too close and taking himself out of the game. Andrew Robertson isn't tucked in and Emre Can doesn't keep tabs on Arfield. A lot goes wrong in the build up but not pressing Tarkowski is what lit the fuse.

Why are Liverpool failing to protect their centre-backs in open play situations? Are the players responsible or are they simple carrying out Klopp's tactical instructions. Does the manager put too much faith and trust in his centre-backs?

Was he banking on Virgil van Dijk's arrival this summer to help with these defensive issues? The Dutchman won't solve all of the frailties Liverpool have but when it comes to aerial dominance he's one of the best in the Premier League and Klopp's team would have benefitted from his arrival in that sense. He won 1.1 more aerial duels per game than Lovren (3.6) last season with 4.7 per 90 minutes, and during the 2015/16 season averaged a remarkable 5.1.

Not only that, though, he comes across as a natural leader, something Liverpool aren't blessed with right now. Would the Reds have conceded the same goals they have with him in their XI?

The Reds are already paying the price for not being able to get that deal over the line in the summer.