Naby Keïta has had quite the week.

Restored to the starting XI for the trip to Bournemouth, the Liverpool No.8 scored and assisted as the Reds romped to a 3-0 victory to maintain their eight-point lead over Leicester City.

Jürgen Klopp then kept him in the first-team for the must-not-lose Champions League clash against Red Bull Salzburg. On his return to Austria, Keïta scored the opener as the reigning champions eventually eased into the round of 16.

Liverpool needed it. And did the former RB Leipzig maestro.

Keïta’s back-to-back standout performances have shown that he has a place not just in this current squad but in the first XI. If he avoids injuries, as cliché as it sounds, he could be like a new signing for the Reds heading into the second half of the campaign.

Since he arrived from Germany in the summer of 2018, injuries have robbed the 24-year-old of showing what he’s capable of. In his first season with RB Leipzig he made 35 starts across the Bundesliga and the Europa League. Keïta followed that up with 29 starts the following year. Yet he’s managed just 24 starts for the Reds and he’s been on Merseyside the best part of 18 months.

Through no fault of his own, he’s had a stop-start career at Anfield.

Fans initially showed patience but over recent weeks that has been wearing thin. Since the switch to England, Keïta hasn’t captivated fans like he did when he was terrorising the Bundesliga.

The reason offered up – that he was playing a different role – wasn’t generally accepted. Supporters wanted to see the RB Leipzig version of the Guinean dynamo. Now they’re seeing glimpses.

In the games against Bournemouth and Red Bull Salzburg, Keïta completed 100 per cent of his dribbles. He also recovered the ball on 18 occasions. The Liverpool No.8 completed 92 per cent of the 135 passes he attempted, of which 55 of those arrived in the final third, while creating two big chances. The fleet-footed midfielder also claimed three goal involvements.

However, his goal contribution is an added bonus. What Liverpool paid the big money for was his influence on proceedings in the middle third. 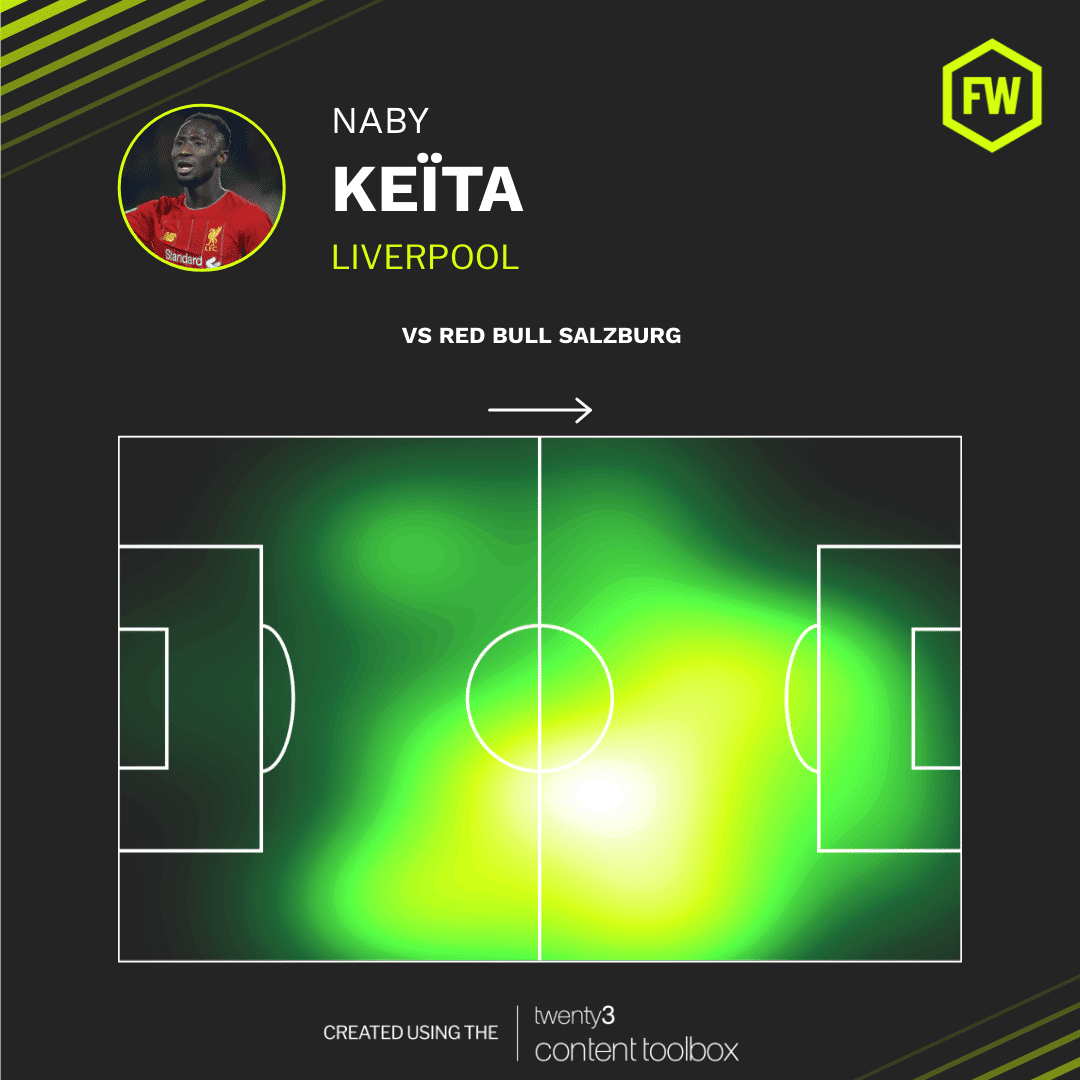 He was heavily involved in a lot of attacking moves in the Champions League victory. The tactical switch which saw him operate in more of a central area played a part in this as, in previous outings, Keïta had been deployed in wider areas.

Klopp touched on it in the post-match press conference: “At the beginning, we used him a little bit on the wing and then we changed our system from 4-3-3 to 4-1-4-1 and we used him in the 10 position and he really played great.”

What Keïta was so brilliant at while at RB Leipzig was effortlessly progressing the ball. It looks simple but it's highly effective. And he was up to his old tricks against Red Bull Salzburg. 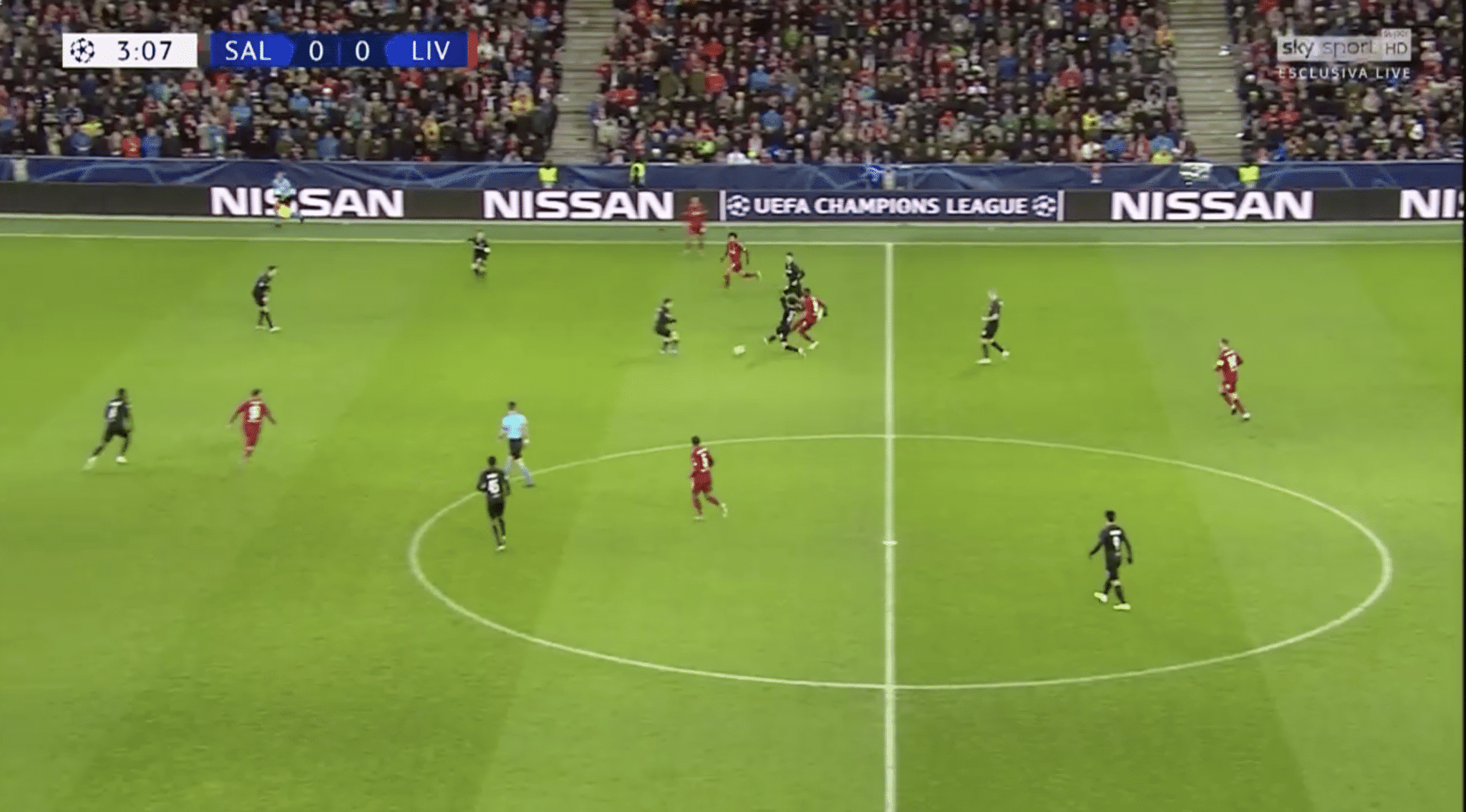 The still above does this pass a disservice. Keïta received the ball and was quickly pressed. The home side wanted to set the tempo early on and kept trying to smother the play.

The easier, safer pass would be to play it to Mohamed Salah. But the hosts have five players in that area of the pitch. They're trying to keep Liverpool pinned to the sideline. Yet Keïta manages to time the pass perfectly to avoid the two players converging on him.

He finds Roberto Firmino who then lays the ball off to Gini Wijnaldum and all of a sudden it's three vs three as the Reds enter the final third. The attack is eventually halted but without Keïta taking Salzburg players out of the game, that opportunity doesn't arise.

It looks simple but Liverpool benefitted from it greatly. There's another example below. 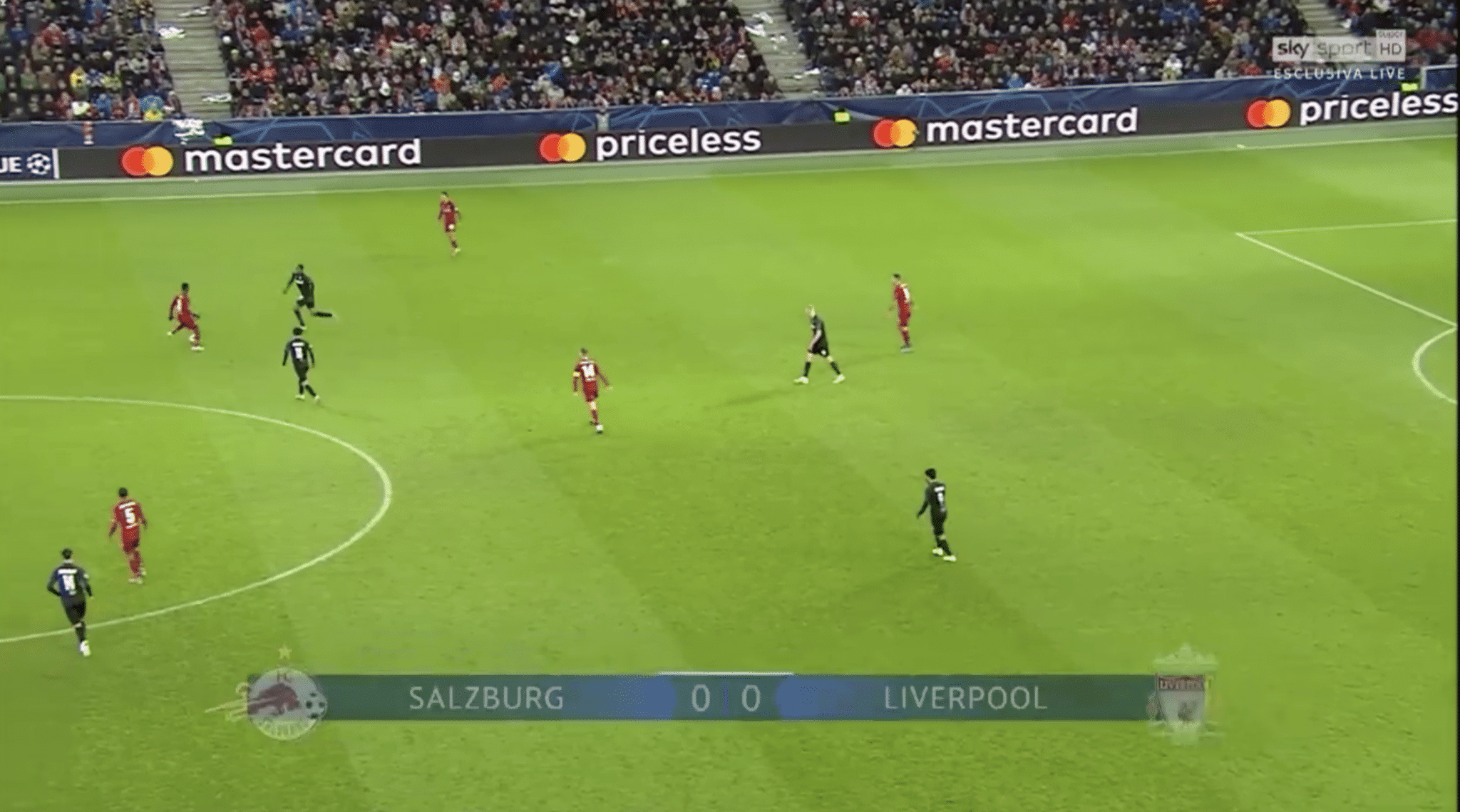 The easy pass for Keïta in the above scenario would be to play it to Trent Alexander-Arnold on the right. But such a pass would've allowed Red Bull Salzburg to continue their press and given they're in good positions, the Liverpool right-back would've been forced to go long or go all the way back to Alisson.

Instead of this, Keïta takes responsibility. He spins on the ball, rides the challenge from the Salzburg midfielder and evades another before bursting into the space ahead of him. 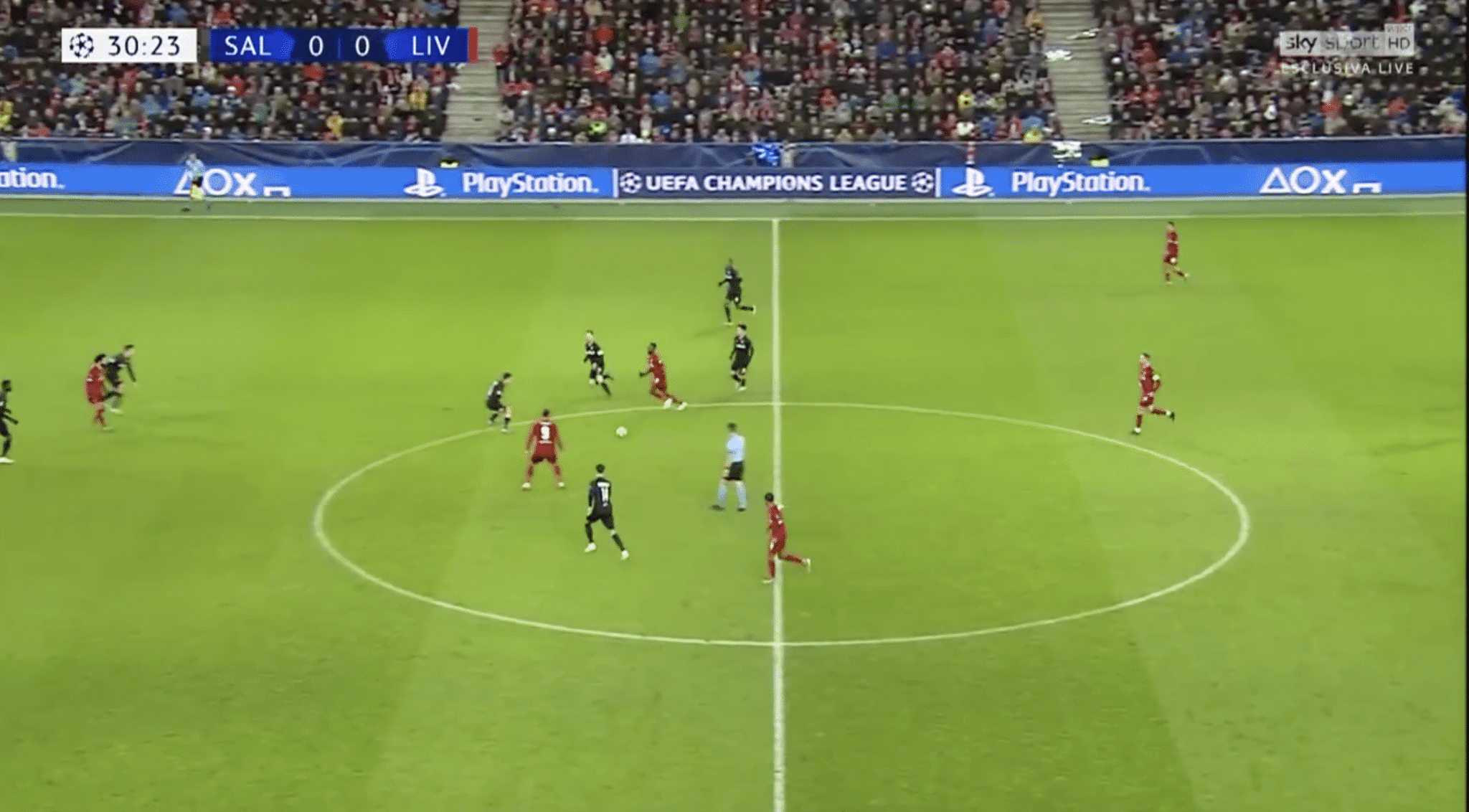 He then makes two Salzburg players commit to pressing him and this opens up space to play in Firmino.

The maverick Brazilian then flicks the ball out wide to Andrew Robertson and Liverpool go from being potentially hemmed in to having space to play in down the left flank, as evidenced below. 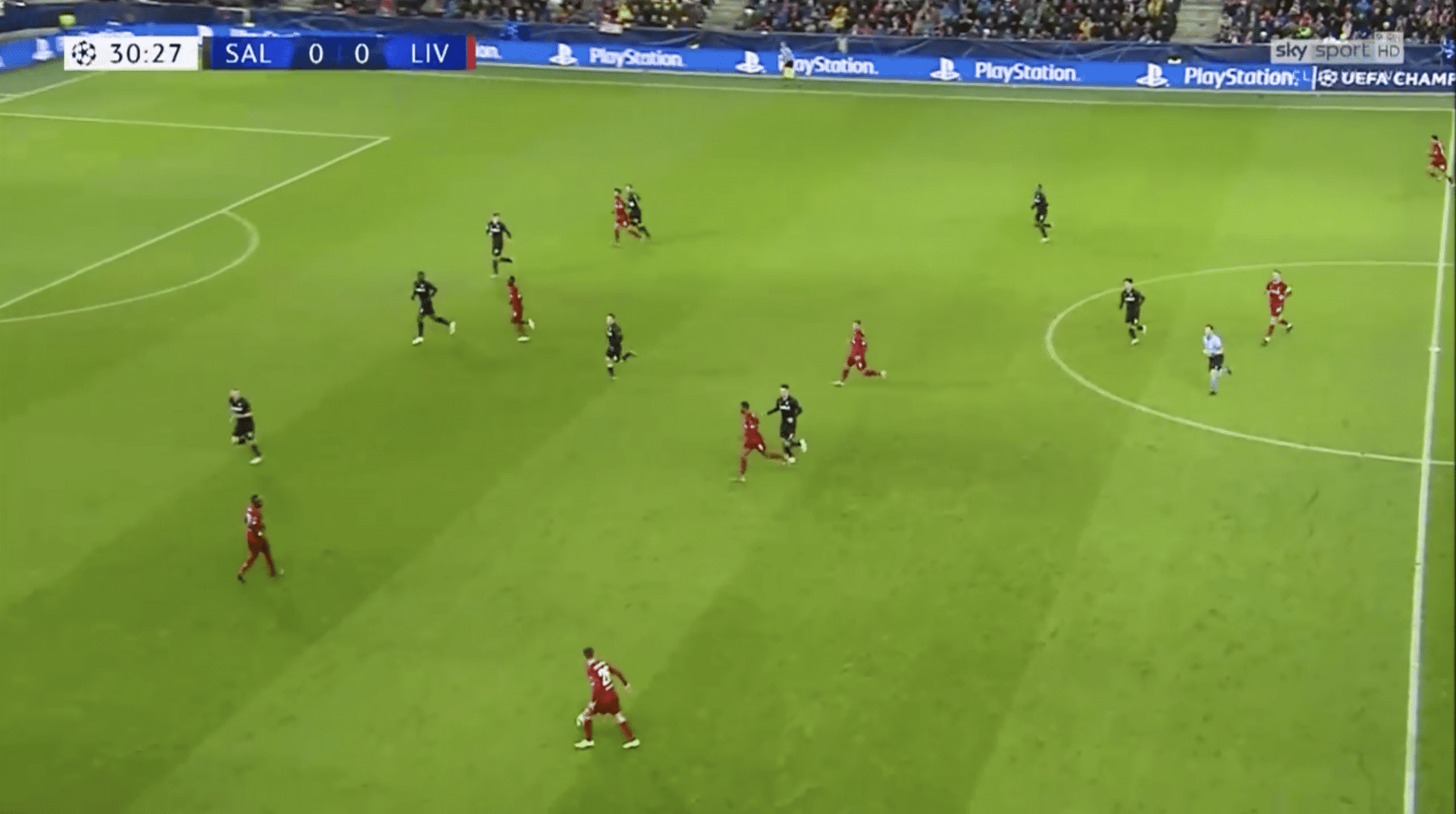 These examples won't make highlight reels. They aren't memorable and don't stand out. But this is what Keïta was doing for RB Leipzig.

This is why Liverpool waited an entire year to bring him to the club. He makes the risky appear mundane because of how easy it is for him. He will, on occasion, lose the ball but that comes with the territory of taking chances.

And if he builds on these two showings, and avoids injury,Keïta adds another dimension to this Liverpool midfield.