Bournemouth's Callum Wilson has had it far harder than most in the Premier League.

The striker suffered two ACL injuries, one in each knee, within his first two seasons among English football's elite. The second, by his own admission, hit him hard.

“As I was driving home [after the diagnosis] I got upset,” he explained in an interview with The Guardian. “I was punching the hell out of my car and everything.

“I got home. My wife wasn’t there and I threw my keys through this window and nearly cracked this door. I went upstairs, lay on the bed, got upset and fell asleep. I was sobbing. I was fuming. There were upset tears, tears for how long it was going to take.”

ACL injuries are incredibly nasty; doctors often say a clean break of a bone is far better for a player to sustain as it can be effectively healed. Damage the ligaments in the knee, however, and it's likely they'll never be as strong as they once were.

For some such an injury can alter a career. It can force a change in playing style, or even hinder a player to the point they can no longer perform at the top level.

Wilson's two ACL injuries meant his first three years as a Premier League player were affected. But this season things are different. The 26-year-old is fully fit, completely focused and better than ever.

Scoring goals was never a problem for Wilson prior to his first knee injury. In his first full season as a regular starter, he struck 22 times for Coventry City in League One.

In his second – by this time he's joined Bournemouth for £3million – he netted on 23 occasions and helped the Cherries clinch promotion from the Championship to the Premier League.

How would Wilson handle the step up? Seamlessly. He struck five goals in six league games and there was talk of an England call-up.  In game seven, though, a late challenge from Philipp Wollscheid halted his rapid ascent.

The striker would be out for six months. He pushed himself, both physically and mentally to the limit. He didn't have a holiday during his rehabilitation, instead focusing all his energy on returning and ignored soreness in his knee.

He returned in April but only made two starts. There were no goals, either. The following season, 2016/17, he featured in 21 games. He netted six times but it was clear Wilson wasn't the same. He lacked the same explosiveness and his running style wasn't as fluid.

Often, after suffering a knee injury, it's common for someone to favour the opposite, ‘stronger', leg. Whether that is what occured with Wilson, we don't know. But in February 2017, he ruptured the ACL in his left knee and missed the remainder of the campaign.

“Doing my second ACL was so beneficial,” he admitted. “I went on three different holidays. I went to a rehab place in Qatar, then I ended up in Philadelphia. Every six weeks I was trying to have a change of scenery.”

Instead of rushing back, Wilson took his time. He returned two months into the 2017/18 campaign and scored a hat-trick on his second league start away at Huddersfield Town.

Nine goals in 31 games was a respectable return. Yet it still wasn't the Wilson of old.

“I had no doubt Callum would come back well because of how strong he is and how well he deals with those moments,” Bournemouth boss Eddie Howe told The Echo in August.

“It seems to have made him more determined to maximise every moment of his career.” Wilson is certainly doing that this season.

Bournemouth have made an excellent start to the 2018/19 campaign. After eight games they sit sixth in the table and, prior to the international break, dispatched an impressive Watford side, one which had admittedly been reduced to ten men, 4-0 at Vicarage Road.

Several players have impressed but none more so than Wilson. He has led the Cherries' attack superbly and has three goals and four assists to his name in just eight league matches.

The good news, too, is that this isn't just a hot streak Wilson is on. His underlying numbers demonstrate that, if anything, he will get better.

Most impressively, however, is his expected goal contribution (xA+xG) of 7.53 is only second in the top flight to Chelsea star Eden Hazard, who is widely regarded as one of the best players in the world.

Of course, one impressive result, such as the game against Watford can skew that overall figure. So how does Wilson fair when his expected goal contribution is broken down per 90 minutes?

Well of players to have featured in more than half of their side's possible minutes in the Premier League this term, he is fourth with 0.97. That's a total above the likes of Harry Kane. 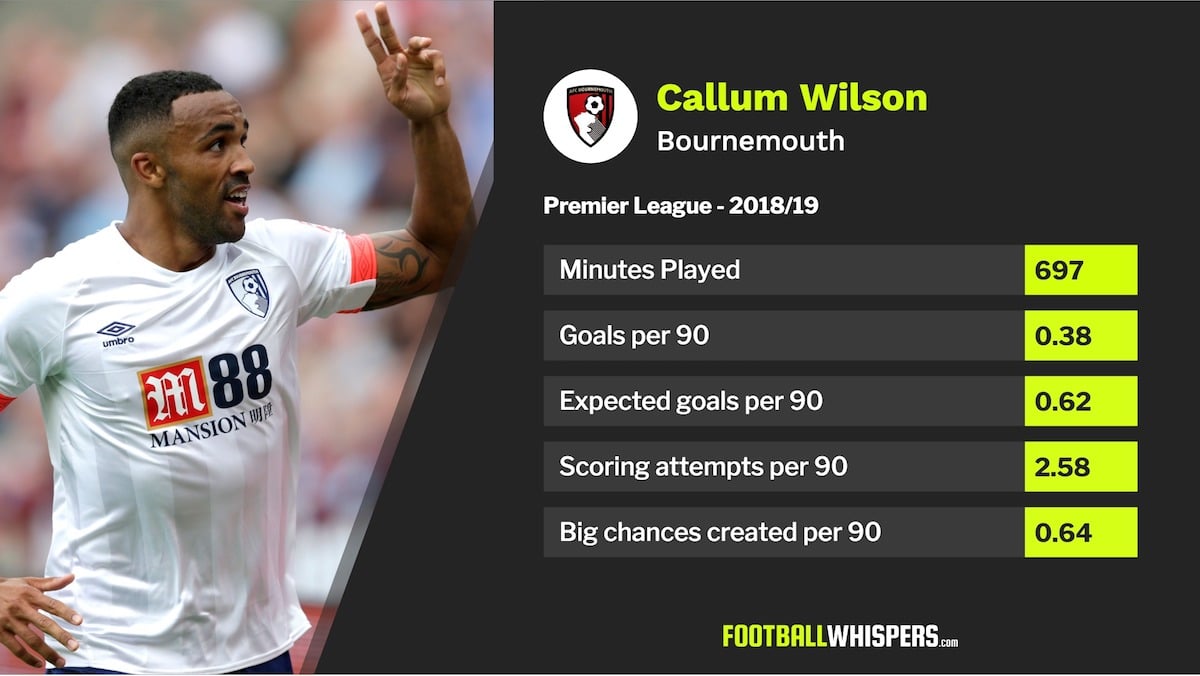 Wilson's first hope, you imagine, will be to stay injury free for the entire campaign. Should he achieve that, and return to the impressive goalscoring rate of years past, then perhaps international recognition will come.

The frontman hasn't yet played for the Three Lions' senior side. He made one appearance for the Under-21s under Gareth Southgate in 2014, but his injury woes meant he hasn't truly been in the position to make the step up.

Yet Wilson has all the qualities Southgate wants for his attackers; he's quick, powerful and smart on the ball. They're also attributes many elite sides want, too. But you get the feeling that Wilson is perfectly happy at Bournemouth, a club that has stuck by him in his hardest moments.

Back in January Wilson said: “Between the two injuries I was nowhere near the player I was. I just wasn’t Callum Wilson, you know?”

It may have taken some time but the real Callum Wilson has been rediscovered. And he is better than ever.