The much talked about Sky TV deal has transformed the way top flight clubs operate. Owners and chairmen can now afford to spend freely, safe in the knowledge that they’ll be fine as long as they can stay in the promised land.

Over the last five years, the transfer market has exploded into life in England. Most teams are willing to operate at a loss, in terms of their net transfer spend, and trends indicate that this is only going to continue in the near future. Despite transfer income rising each year for almost every club, the amounts are dwarfed by cash flowing the other way. 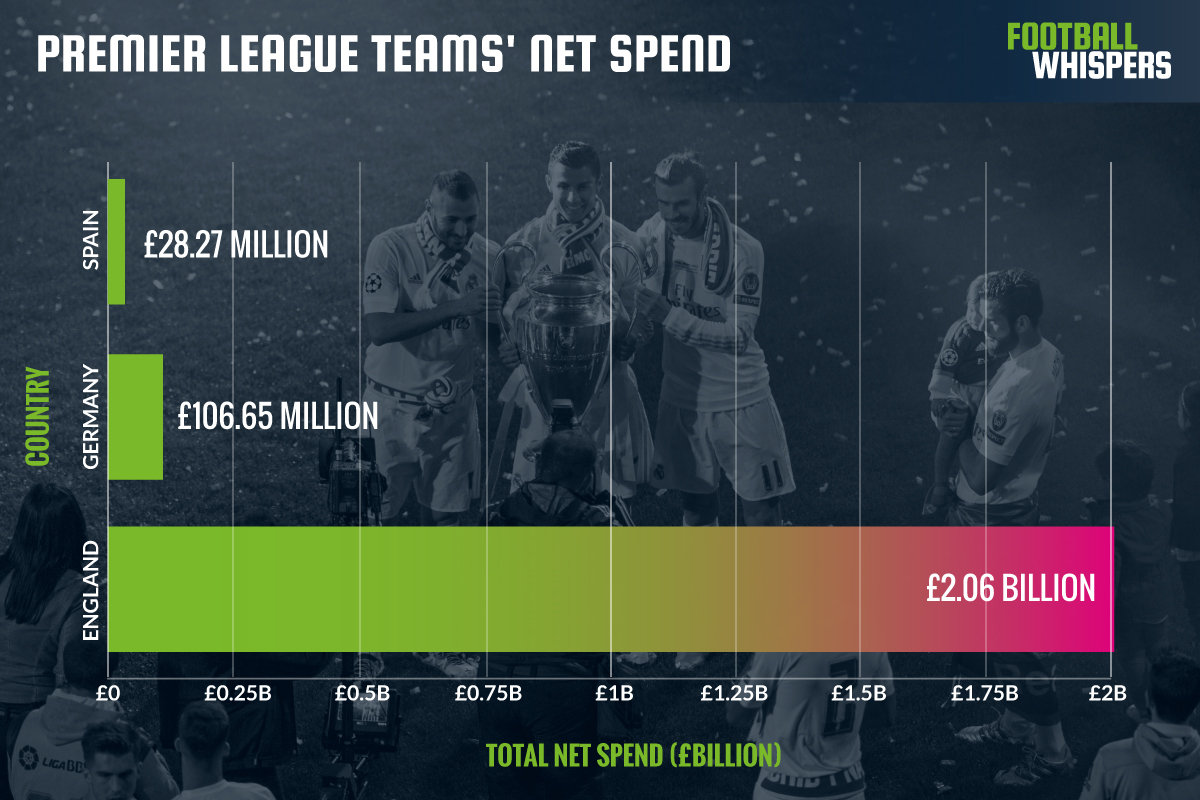 Take Watford, for example. They spent over £57m in the last window: destroying the long-term net transfer profit they had accrued over the past five seasons. The money from the new TV deal means that they have no need to be thrifty, as the equal share for being in the league is worth over £55m per season – with added bonuses derived from final placement and how many games are broadcast.

Watford were the seventh highest net spenders in the Premier League this summer, and they also outspent every team in Germany during the window – Borussia Dortmund and Bayern Munich actually spent more, but made sure to recoup their losses through player sales.

The Hornets outspent every team in Spain bar Atletico Madrid and Barcelona, giving a clear indication of the changing fortunes in football. Teams like Watford now have the ability to pay wages and fees that Champions League clubs in other countries cannot dream of. However, some pundits have argued that the quality of players being signed by Premier League clubs is questionable considering the amounts spent.

If one of the larger traditional European clubs makes a bid for a player, they tend to buy quality, and they spend less than their English counterparts (well, most of the time). Although, as we saw with some recent negotiations, officials foreign clubs know that their English counterparts are willing to pay a premium price for players that aren’t necessarily top level; raising fees when buying abroad.

Meanwhile, Premier League clubs are under less financial pressure and so do not have to sell to one another (raising prices further). It’s why Chelsea came knocking, as they really don’t need the money.

This is the same club that used to ask David Moyes to replenish his squad each year with funds they scavenged from down the back of the sofa. It’s becoming a bizarro scenario, where Yannick Bolasie is suddenly worth £25m. With no disrespect meant, he would have probably been a £10m player five years ago.

World class players in Spain still earn a wage comparable to higher rates offered in England, and there’s no chance that Gareth Bale or Neymar will be leaving La Liga any time soon. Of course, the Real's and Barcelona’s of this world are still more alluring for the best players, and it means that it’s hard to attract world class players, no matter the price. Even so, there’s a chance that they’ll buckle to the financial pressure of English clubs if they come calling in a couple of years – think of Manchester United’s pursuit of Paul Pogba, and their willingness to pay whatever price was quoted to get their man.

Another point is, much of the money spent on players abroad is reinvested in infrastructure by the club, training up the next batch of stars to be sold on to the Premier League. It's one of the reasons why European clubs are continually replenishing their stocks with exciting talent. It could also be seen as death by 1,000 cuts.

No matter how much money Premier League clubs have thrown at their problems so far, it’s only served to strengthen their rivals in the long term. On the other hand, if you keep removing quality from a team or league, something will eventually give.

For all of the talk of the billion-pound barrier, it’s worth remembering that Arsenal, Chelsea and the two Manchester clubs, City and United, spent over £550m between them in the last window. They’ve been tipped for the top four, and will have no excuses for failure to hit that target when you factor in the money they’ve spent. Anything less would be unimaginable, despite the Premier League being sold on the proviso that anybody can triumph. 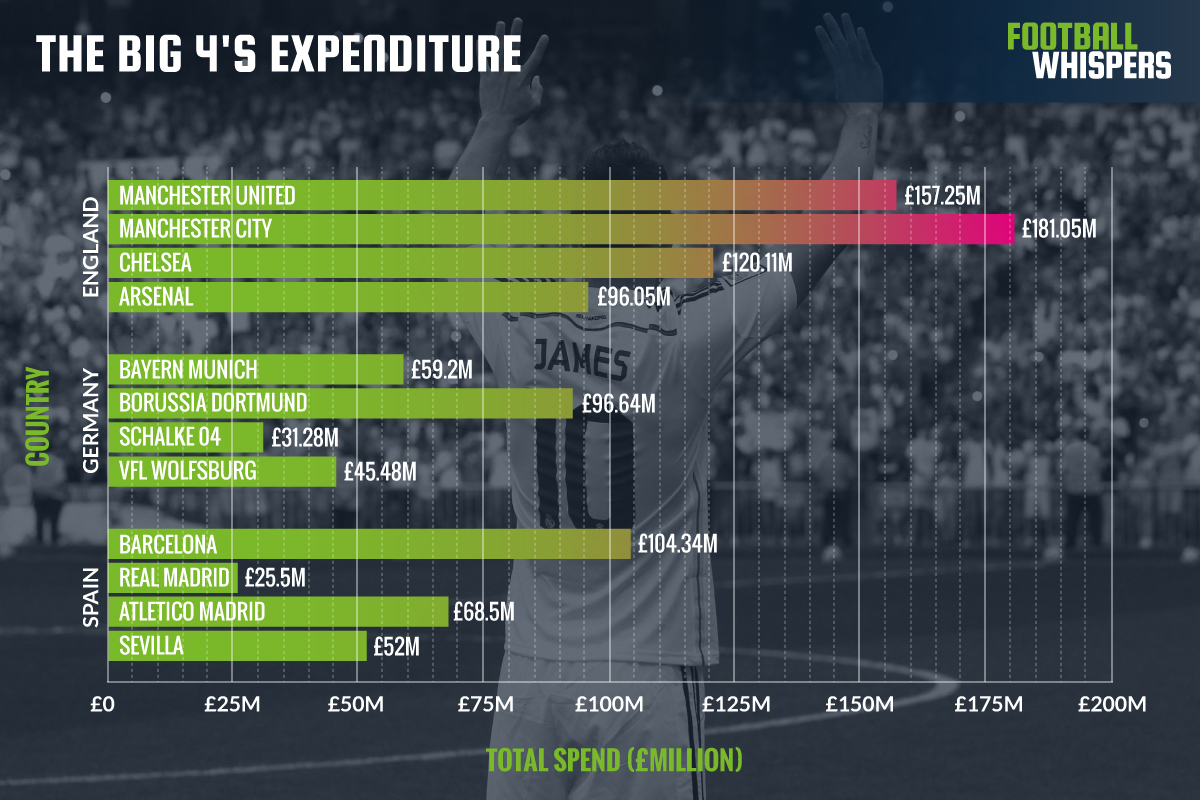 Manchester City are a fairly special case, with just under £690m worth of losses in the transfer market over the last five years. They’re obviously able to handle any financial shortfall, (even one that’s worth over half-a-billion pounds) but it’s worth noting that they’ve spent twice the amount that Barcelona have during the same period.

The money sloshing around in the Premier League has caused the price of players to skyrocket, while the overall quality of players has arguably dipped since the last decade. It’s a simple case of supply and demand, and there just isn’t enough out there for everyone.

On the other hand, as City have found in recent years, financial might will only get you so far on the grand stage of European football. Premier League clubs have been lagging behind for a while now despite their affluence, and it’s the main reason why Pep Guardiola was drafted in to manage Manchester City. What use is perceived power if the best Premier League teams can’t match up to their European counterparts? It’s also going to hinder any moves for top players, as they’ll want to be fighting for trophies at clubs that actually have a decent chance of winning something aside from the domestic cups.

The Mirror are leading with a story that there’s a good chance that clubs will break away to form a European Super League in future. They argue that it’s the only way to curb the influence of the Premier League in the long term, as the riches on offer will probably lead to a continued shift in power.

With the Sky deal locked in for the next three seasons, it makes sense that Juventus, Paris Saint-Germain, et al might want to break away and form a new competition where they can still be one of the big boys. It would be naive to think that the TV deal had nothing to do with it.

The deal with Sky has left the smallest Premier League teams with enough resources to battle established European powerhouses, but there’s still a sense that the richest English clubs are out of reach.

The Chelsea’s and Manchester United’s are still outspending smaller teams, and they can now freely outmuscle most clubs in the world – regardless, even the three promoted sides spent £59.5m this summer, which is nearly six times their Spanish counterparts.

Premier League teams are willing to splash the cash in a bid to keep the Sky money rolling in for the foreseeable future. 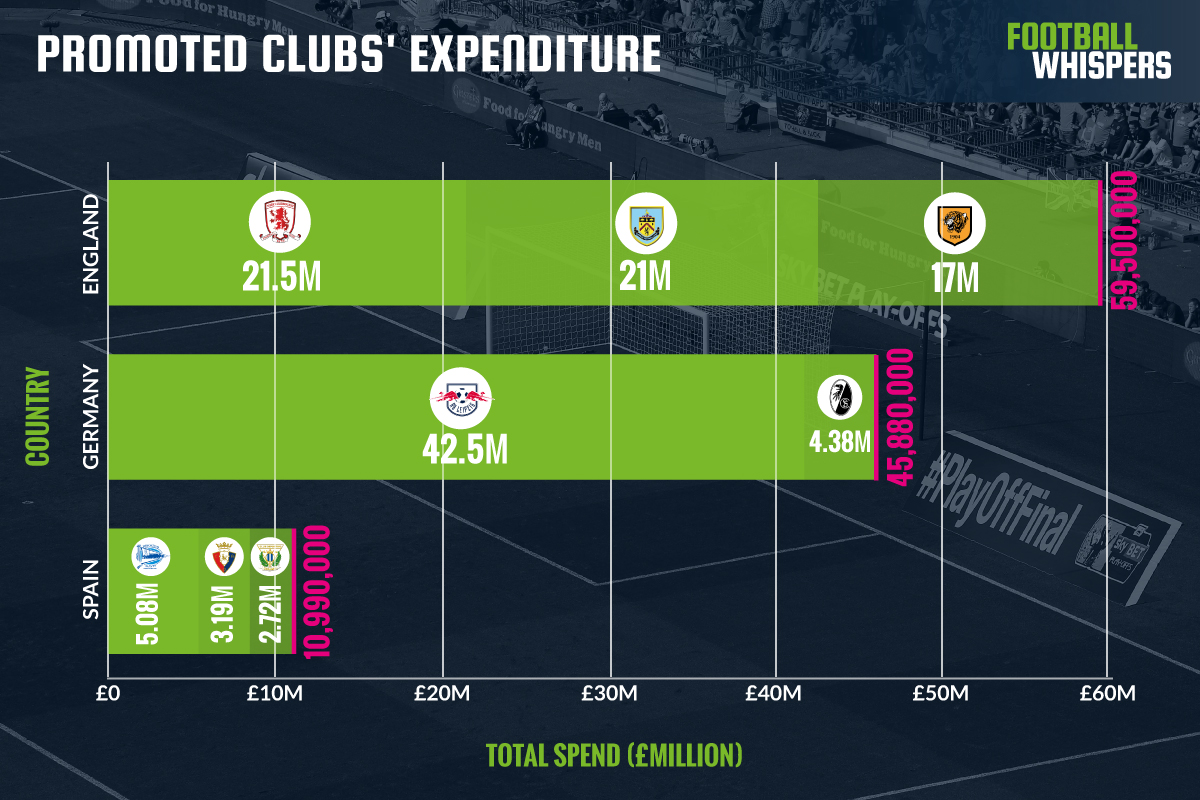 In terms of the football, it can be argued that there’s been no real leap in quality since fees started to climb to their current levels, but this is the first window in which the clubs have been paid the TV money. We’ll have to wait and see whether breaking the billion-pound barrier will be enough to snap English clubs out of their malaise, and the Champions League will be the best indicator of any progress.