A little over two years ago, Philippe Coutinho was playing the best football of his career. With the help of Jürgen Klopp, the Brazilian maestro had added a ruthless consistency to his game and, for the first time, people had started to put him in the same bracket as the very best in Europe.

Then his dream move to Barcelona came to fruition, with the LaLiga side parting with £140million to pry him away from Liverpool, and everything changed. Coutinho was no longer the star attraction and instead had to settle as a supporting act at the Camp Nou. For the first time in a long time, the playmaker was exposed in a system he was being used in, rather than being protected.

After an 18-month spell with Catalan club, Coutinho was shown the exit door. Bayern pounced on the opportunity and signed him on a loan deal to fill the void left by James Rodríguez returning to Real Madrid.

The move to Bavaria was supposed to reignite his career. Instead, it has prompted even more questions. Since the turn of the year, Coutinho has started just two of the five Bundesliga matches for the champions and had to settle for cameos in the other three.

Interim boss Hansi Flick has preferred Ivan Perišić, Leon Goretzka and Thomas Müller as the trio behind Robert Lewandowski in recent weeks. Despite this, reports in Spain claim Coutinho wants to remain in Germany. Barcelona are open to selling him, too, and they’re prepared to take a substantial loss.

The LaLiga champions are hoping to bank £77million for Coutinho but Bayern are reportedly unsure whether or not to sanction such a deal. The Bundesliga leaders have other transfer targets in mind, namely Leroy Sané and Kai Havertz, meaning their current No.10 isn’t in their long-term plans, at least not at that price.

It may come as a surprise given the 27-year-old’s numbers this season have been impressive.

He's chipped in with six goals and six assists in just 1,146 minutes of action to give him 0.94 goals involvements per 90. He's exceeding his open-play expected goal contribution of 0.68 but his finishing from distance means Coutinho will always be performing at a higher level than his expected averages. 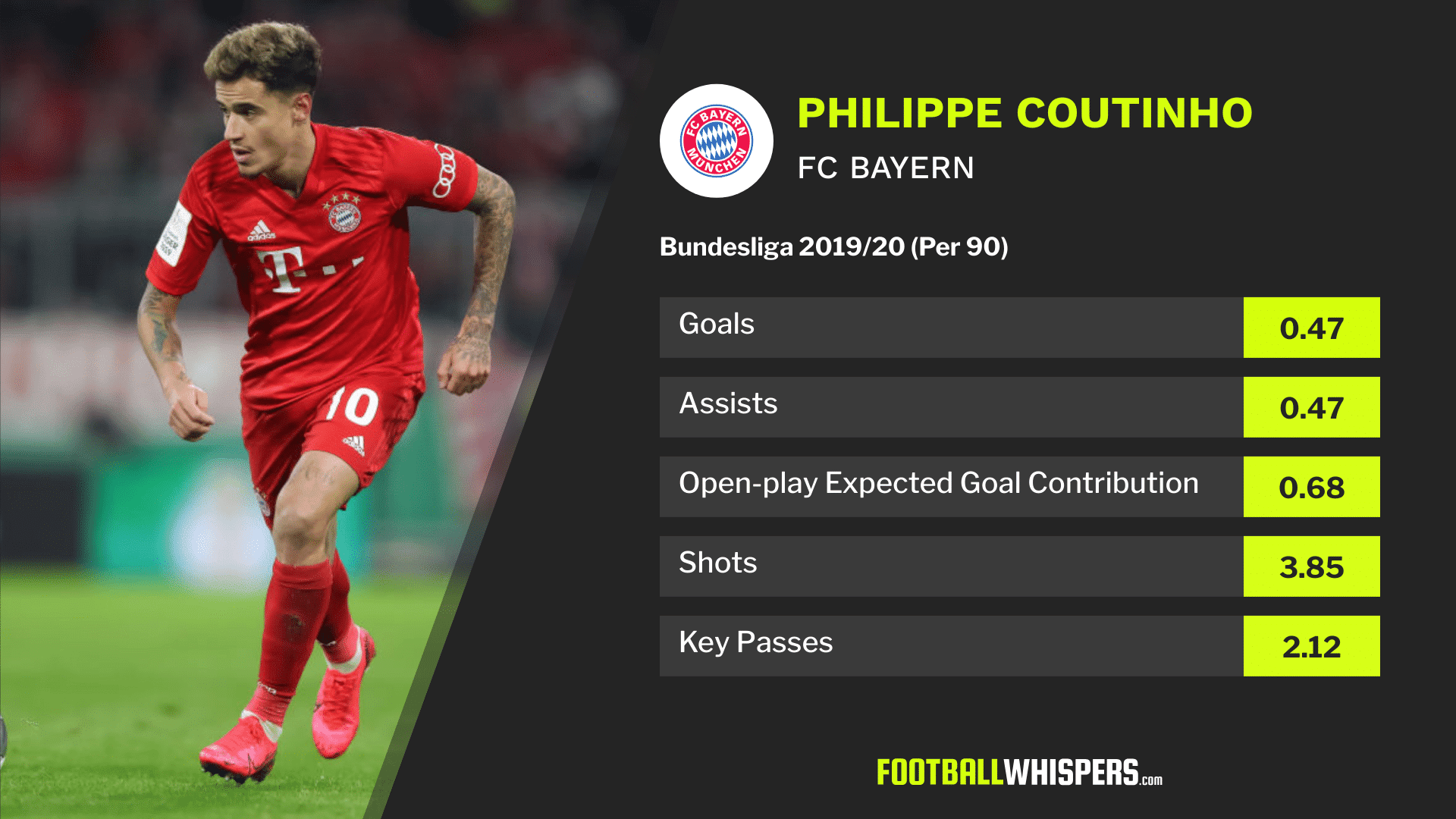 He's playing 2.12 key passes and averaging 3.85 shots per 90. The latter stat is one many top strikers would be happy to have, but it does highlight Coutinho's need for volume to be effective.

But stats don't tell the whole story. For example, five of his 12 goals involvements arrived in one match when Bayern thrashed Werder Bremen. Coutinho netted a hat-trick and added two assists in an utterly dominant display.

Treat that match as an outlier and the Brazilian has three goals and four assists in 1,064 minutes. That's still a goal or assist every 152 minutes in the German top-flight but the most surprising figure is that Coutinho has only been involved in goals in six Bundesliga matches this season. For context, he's appeared in 19 games meaning in two-thirds of his appearances he's failed to get on the scoresheet or assist a team-mate.

Schalke‘s Suat Serdar has just the seven goals this season in his 17 appearances. However, he's been involved in goals in seven different matches meaning he's had a recognised contribution in 41 per cent of the matches. Goals and assists aren't the be-all and end-all when judging a player but teams want impactful individuals. The example of Serdar helps highlight the fact Coutinho isn't dominating the Bundesliga as it may appear at first glance.

If Bayern opt to look elsewhere, Coutinho will be available this summer. In the past, there would probably have been a mad scramble to sign him. But teams have evolved and there's more of an awareness about playing profiles. On FIFA, Coutinho would improve near enough every team in Europe. In reality, it's a struggle to fit him into a system without building it around him.

Furthermore, few teams are in a position to shape their attack around the talented Brazilian.

He was linked with a move to Tottenham Hotspur prior to José Mourinho's appointment but the signings of Giovani Lo Celso and Steven Bergwijn mean they have no need for him now. Manchester United were mooted as a potential destination for the former Liverpool attacker but the arrival of Bruno Fernandes killed off their need for a player like Coutinho.

A return to Merseyside is talked about with great regularity but the manner in which he departed burnt one too many bridges. And the Premier League leaders have evolved as a team in his absence. Chelsea reportedly identified him as a replacement for Eden Hazard but Frank Lampard appears to have bought into Mason Mount as his creator-in-chief.

On paper, both Arsenal and Manchester City seem like a good fit. But in reality, both teams are meticulous in their approach and the margin for a player of Coutinho's nature is slim at best.

Liverpool facilitated his style and planned accordingly. They hid his weaknesses and highlighted his strengths. But as soon as he left them, his stock plummeted because teams realised he had limitations and a number of them at that.

If a team is prepared to make the Brazilian the hub of their play, they'll grab themselves a bargain this summer. But the Coutinho conundrum becomes more complex with every passing transfer window.