In 1966 Wembley’s famous old twin towers witnessed one of their most memorable moments as a group of players, united by an unbreakable passion and an unwavering spirit battled against all the odds to claim football’s most glittering prize.

In one of the most enthralling finals of the world's greatest domestic knockout competition, Harry Catterick's Everton netted three times in 15 second half minutes to overturn a 2-0 deficit; breaking Sheffield Wednesday hearts and securing the club's third FA Cup triumph.

Just weeks before Bobby Moore climbed the 39 steps up to the Royal Box to claim the Jules Rimet trophy that confirmed England as Kings of the world, this was the other cup final of that year and was just as much a classic.

Everton certainly earned their place in the final that year, arriving at Wembley as the first team ever to reach the FA Cup Final without conceding a goal as they got past Sunderland, Bedford Town, Coventry City, Manchester City – after two replays – and a Manchester United side in the semi-final that contained the likes of Best, Law and Charlton.

But if Evertonians thought they had done all the hard work and their name was on the cup for the first time in 33 years on that May afternoon half a century ago, they were to have something of a shock – starting when the teams were announced.

Fred Pickering had been expected to return to the starting 11 after picking up an injury two weeks before the Manchester United semi-final and although he played in the three league games leading up to the final, manager Harry Catterick put his faith in a player who he’d recently signed from Plymouth and was yet to make a name for himself.

Mike Trebilcock had only come to Everton from Plymouth at Christmas for £23,000 and after receiving the call mid-week he would make the six-hour train journey the very next day, unaccompanied,  to a city he’d only ever seen on a map totally unaware of the folk-hero he would soon become.

Due to injury his only appearance in that cup run was the semi-final against Manchester United, in which Trebilcock modestly claimed he’d, “had a great game,” so when he travelled to Wembley with the rest of the squad to face Sheffield Wednesday for the final he genuinely thought he was only there to make up the numbers – his name wasn’t even printed in the programme. “I honestly thought I was going down to help lay out the kit, and I was just excited that my mates from Cornwall would see me on TV, sitting on the bench,” he later explained. 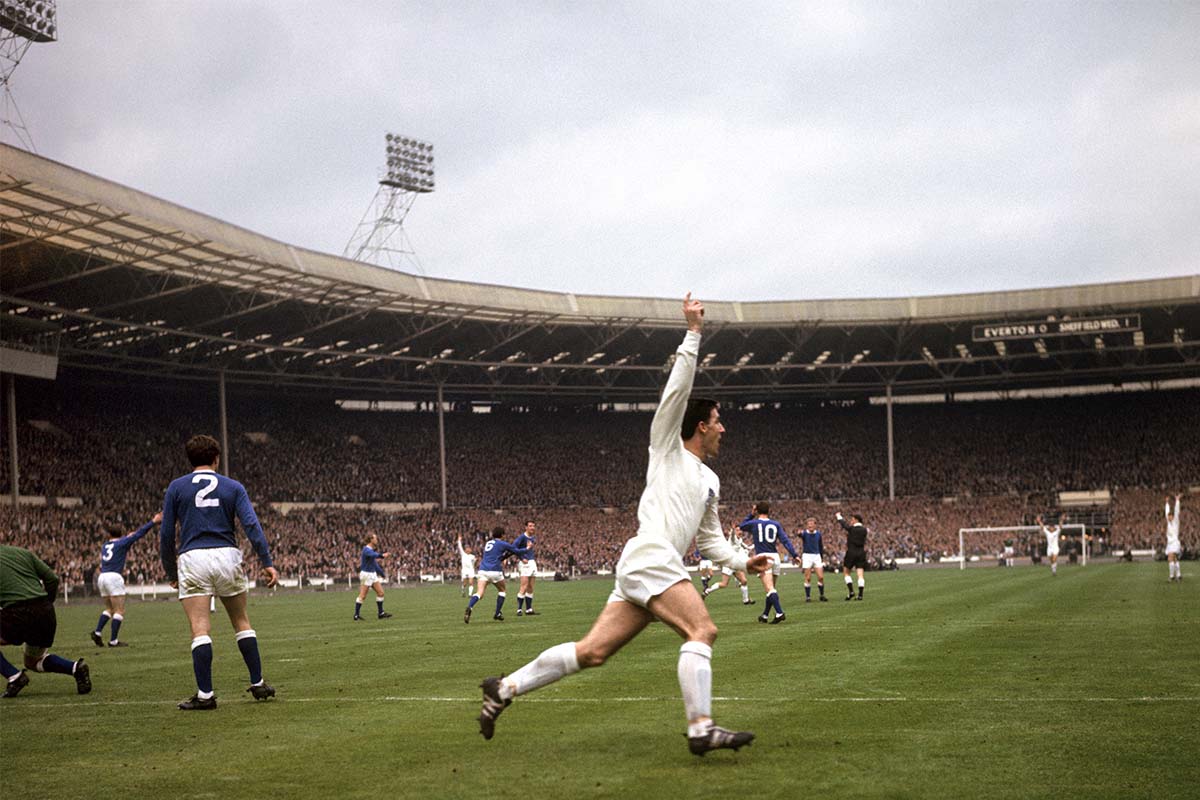 But to his amazement he would soon be told that his role that day would be far greater than handing out the shirts and cutting the half-time oranges. “Someone said that the manager, wanted to see me in his room so I went up and was surprised to find Fred, Sandy Brown and Tommy Wright in there. Harry made a little speech saying it was a tough decision but that me and Tommy would be playing instead of Fred and Sandy. I almost fell off my chair in shock.”

Although Everton started as strong favourites, Sheffield Wednesday were determined not to be overawed and took the lead early on when Jim McCalliog scored with a deflected shot that left Gordon West helpless. The writing appeared to be on the wall for Everton when Alex Young's brilliantly finished goal was ruled-out for offside. They also had a good shout for a penalty waved away by the referee.

As the half went on Wednesday appeared comfortable with their lead, sitting back and quite content to let Everton control the play as they went in search of the equaliser but the score remained 1-0 as the half time whistle blew.

The second half started very much in the same vein, with Everton enjoying plenty of possesion but not able to make the most of the advantage. Young went close five minutes into the half when he received Temple's inch-perfect ball, turned and smashed the ball goalwards only for Gordon Banks’ rival for for the England goalkeeper's jersey, Ron Springett, to pull off a wonderful save.

But Just as the Blues were getting a foothold in the game Wednesday caught them on the counter when Johnny Fantham ran through the middle, his fiercely hit shot was only half saved by West, the ball rebounding out to an unmarked David Ford, who calmly turned it over the line. 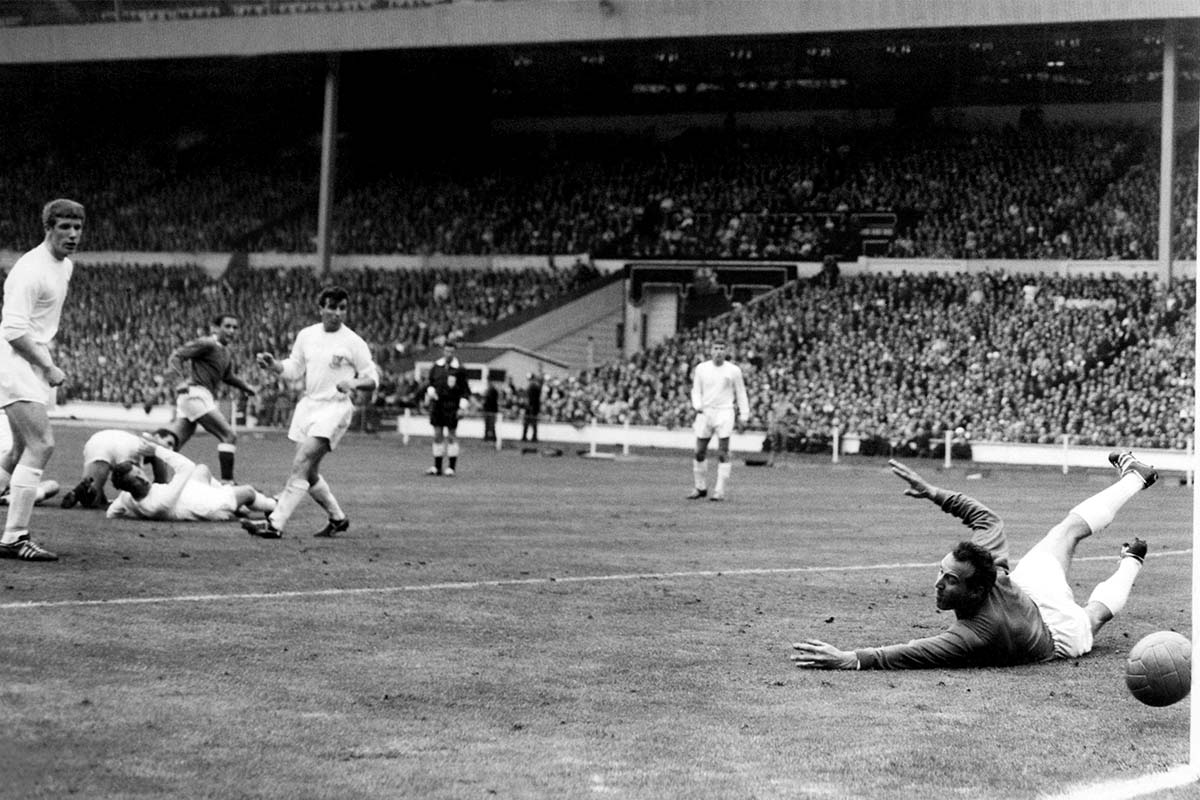 It would have been understandable if Everton had wilted at this stage, but they did exactly the opposite and played like a team inspired; if anything that second Wednesday goal seemed to spur the Merseysiders into action. Their response was instant and just over a minute later Derek Temple played in Trebilcock and the man who thought he was just there for a day out made it 2-1 from 12 yards out.

Four minutes later a free kick into the Wednesday box was not properly cleared and that man Trebilcock was Jonny-on-the-spot once again to crash home from the edge of the area. Suddenly, from out of nowhere it was 2-2. “Malcolm Allison had drilled into me at Plymouth that you always had more time in the box than you think, and I remember that thought being with me,” Terbilcock would tell the Daily Mail. “I didn’t even see the second one go in. I was so busy concentrating on keeping my eye on the ball that my head was still down.”

Evertonians went wild, particularly a certain Eddie Cavanagh who famously left a policeman in his wake as he ran across the pitch in joyous celebration in one of the most iconic images in FA Cup final history.

The comeback was completed when Gerry Young in the Sheffield defence allowed Temple to bear down on goal and fire past Springett from the edge of the box to give his side the lead for the first time with just 16 minutes remaining; a goal which would ultimately confirm victory for Catterick's men.

Everton nearly grabbed a fourth minutes later when Young played-in Trebilcock for his hat-trick but he failed to beat the Wednesday keeper once more. Wednesday had just one last chance left in them, in the last minute, when Fantham headed over; but Everton's triumph was complete.

They had looked dead and buried at 2-0 down but the intervention of the most unlikely hero had inspired them to fight back and eventually complete the comeback. So it was Brian Labone who would make the same walk as Bobby Moore some 8 weeks or so later to collect the FA Cup for Everton for the first time since 1933 and go down in club folklore as 40,000 Blues roared their approval.

But what of the man who stole the show that day at Wembley? Not the over-exuberant Mr Cavanagh, but the man who never thought he’d even play, let alone score two goals that would secure his place as a legend among Evertonians to this day.

After the lap of honour Mike Trebilcock then went on the town with Derek Temple and a number of newspaper reporters who proceeded to take them to a nightclub where they would continue the celebrations; but sadly this was not to be the start of a glorious career with the Toffees. He spent most of the next season in the reserves, and, despite scoring prolifically, struggled to get back in the first team, eventually being sold to Portsmouth for £40,000 in 1968.

The Cornishman would never reach such dizzy heights again as he did following that day at the national stadium in the spring of 1966 and after five seasons at Pompey he ended his career in England at Torquay then Weymouth, before emigrating to Australia just short of his 30th birthday. 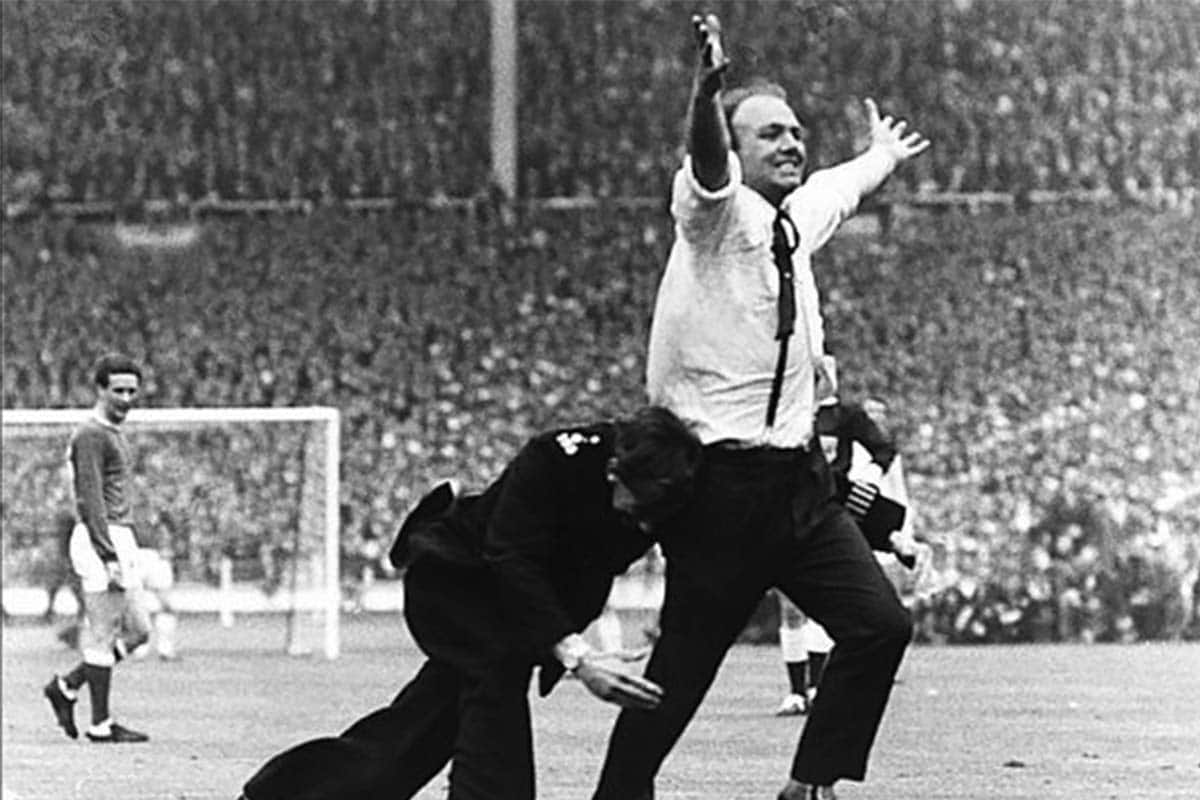 “My career was pretty much finished and I had an offer to play in New South Wales,” he later said when talking about his move. “We had two young daughters and it seemed a good time to make a new start.”

It’s often said that 1966 was a great year for English football and this stunning comeback just proves it. What would take place at the very same stadium a matter of months later will always eclipse the coverage this Wembley epic receives, but for Evertonians there was only one cup final that year and this was it.