Angers vs. Troyes Napoli vs Salernitana Metz vs. Nice Crystal Palace vs Liverpool Arsenal vs Burnley

Derbies are the life-blood of a supporters’ footballing calendar. As soon as the fixtures are announced each summer, there is a supporter scramble to take note of where and when you’re facing your local and regional rivals. There’s a special buzz around the club as each and every player and fan alike realise the two months that will become defined by one game in particular. The Derby.

There are plenty of game like this across world football but few are as vocal, as venomous and as heartfelt as the North London Derby between Tottenham Hotspur and Arsenal.

The fixture has had stunning strikers and piercing tackles, red cards, yellow cards and crossing-the-boundary transfers. Ahead of this week’s possibly league-defining fixture, I take a look at the past and the present of the rivalry between these two teams.

The place to start when discussing the fiery, sometimes abusive nature of this derby is probably where it all began. Where the vat of intense rivalry finally started spilling over and ignited the flames for decades to come. The year 1919.

The First World War had just finished and the league was looking to expand its top division clubs from 20 teams to 22. Chelsea has just been relegated that season and had expressed their desire, successfully, to take up one of the places in the newly expanded league format. Chelsea finishing 19th took one of the two new spots up, meaning that, because of the two promoted teams being allowed their places, there was one remaining additional spot in the league. This could have been offered to either 20th placed Tottenham, or the 3rd placed team in the 2nd Division, Barnsley. Both decisions would have made sense, but Arsenal had other plans.

Arsenal FC had made their mind up that they wanted a slice of the top division pie and, with strong backing from Liverpool’s then owner John Mckenna, put forward their name to be added to the list of candidates. This was allowed, even though Arsenal had only finished 6th in the 2nd tier that year. Against the arguments of Spurs (and Barnsley), Arsenal were voted into the newly expanded 1st Division at a vote of eighteen votes to Spurs 8. Tottenham Hotspur were left furious – and relegated – whilst Arsenal got a promotion to the top league because of their standing of having a longer membership to the league than their rivals in London. This pushed the North London battleground to a bitter and hateful level.

The above never set Spurs back too far though, with their promotion to the top flight secured during the following 1919/20 season.

Spurs and Arsenal has been the most consistent derby in recent years, with it being a mainstay of the top division fixture list in all but one year since 1950. This has led to much gloating, mockery and heated discussion between both sets of fans. But my memories of this derby are held in three places. 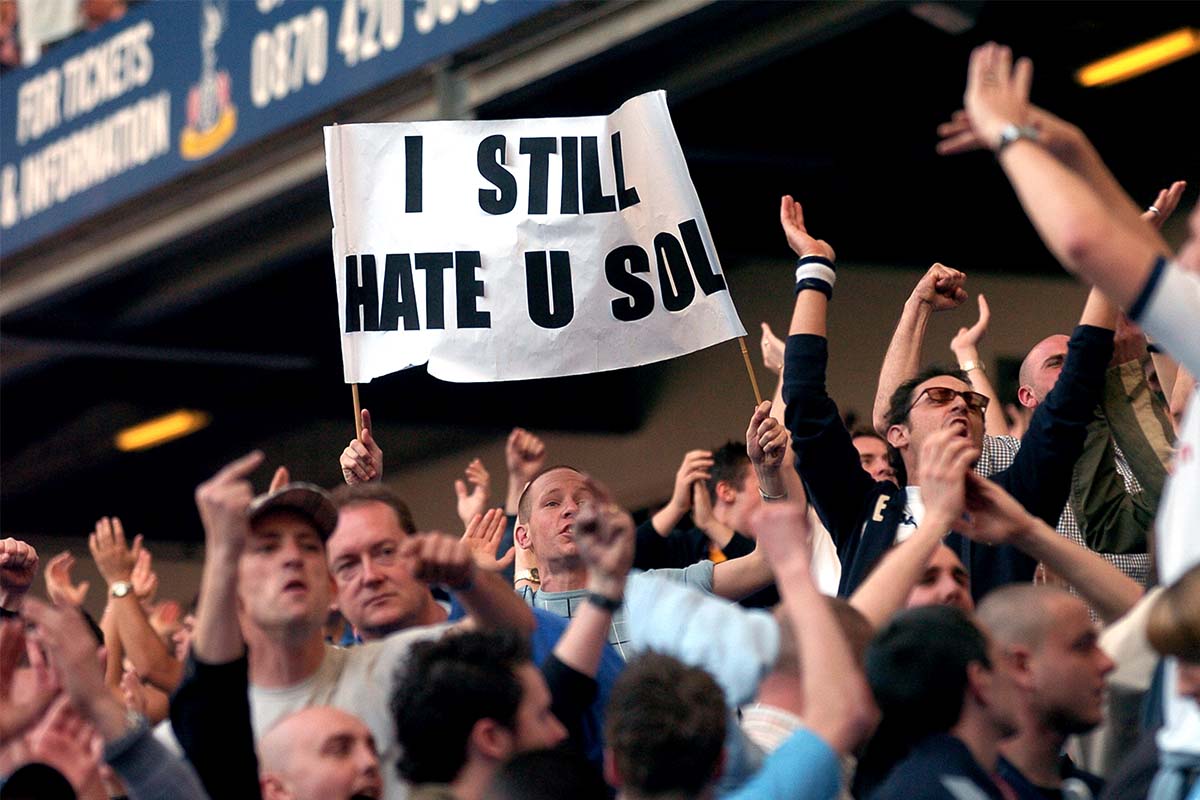 The first for me was Sol Campbell moving from Spurs to the Gunners in the summer of 2001. Sol Campbell was a hero to many Spurs fans amongst a time when the team was the entire embodiment of a mid-table team. Finishes including 11th, 14th and 10th meant that not only were Tottenham fighting a mid-table scrap but also a losing battle to keep one of England’s brightest defenders at their club. But during a time of only rare forms of contract disputes, little did their fans know that Sol Campbell wouldn’t be renewing his contract with Spurs, but he would in fact be moving to their most fierce rivals. For nothing. Queue cries of ‘”Judas” and, unfortunately, homophobic chanting from a small, small selection of Tottenham fans towards their former defender. The dislike from Spurs supporters is still present to this day.

My next memory is a personal one more so than a famous one as such, and not being a fan of either team, this goal sticks in my mind because of the sheer awesomeness of it. Danny Rose, 10 minutes into the game at White Hart Lane. A corner fires across the penalty area in which Arsenal ‘keeper Manuel Almunia punches it far enough to say that the chance for Spurs has gone. Falling kindly, perfectly, romantically to the feet of a 19 year old Rose making his debut, the defender strikers the ball with such brilliance, leaning back but never getting too far over the ball, firing a smooth, crisp strike back towards the Arsenal net in incredible fashion. It really is a goal that needs to be seen to be appreciated. I watched this in a crowded bar in Sheffield, after a few drinks and as my first (and last) game watched in 3D, the strike blew my mind. A memory and a half. And I haven’t thought about 3D football coverage since. Delightful.

My final memory is one that added a little bit more needle to the rivalry, and it being an FA Cup tie, knocked Spurs out in the process. This memory is the now infamous ‘2-0’ celebration as Theo Walcott was stretchered off the pitch. As a neutral it’s always good to see players giving fans a bit of stick as supporters are always the first to do the same the other way, and with Arsenal being seen as a side the lack fight or bottle, to see a player actually give a bit back it's always great to see!

The game between the two sides this weekend is probably the most tightly contested matches in recent memory, with Tottenham being rejuvenated by press-master Mauricio Pochettino and his backroom staff, whilst Arsenal fans are starting once again to pick at the once-perfect marriage between themselves, the club and their manager Arsene Wenger.

Arsenal have the stronger squad, but it seems Pochettino has moulded a really strong, youthful and promising team of players this year which is leaving many pundits predicting they will be the team lifting the Premier League title come May.

Whoever wins the game on Saturday lunch time will be in prime position to tackle Leicester to become leaders and eventual winners of the Premier League. The revival of Spurs’ fortunes under Pochettino could mean that this fixture becomes more important and more tightly contested than we’ve ever known it in the Premier League era. And for the neutral fan that can only make for mouth-watering viewing.