On June 18th 1996 England claimed an historic win over Holland in the European Championships at Wembley in what some described as the best showing by a “Three Lions” side since their World Cup triumph 30 years before.

When the tournament hosts faced Holland the Dutch were perceived as one of the better sides in the competition while England were viewed by many as merely plucky chancers; but what happened that night would not only throw the formbook out of the window; it would give a nation a reason to believe once more.

Euro '96 had started slowly for England after a disappointing 1-1 draw in the opening game against Switzerland; but a memorable 2-0 win over Scotland, thanks to heroics from David Seaman and Paul Gascoigne, meant they would find themselves in a straight shootout with the Dutch for the Group A top spot when the two met on a balmy night under the old twin towers.

For those who didn’t experience Euro ’96 it’s difficult to explain just what an impact this tournament had on the nation and the game as a whole (for better or for worse depends on your point of view). This was the summer of Britpop, the Spice Girls and now football was rock ‘n’ roll thanks to a tournament that captured everyone’s imagination, even if they weren’t keen on the game previously.

The Lightning Seeds, aided by Skinner & Baddiel, replaced The Fugees at No 1 in the charts with their singalong anthem Three Lions, while England players Stuart Pearce and Gareth Southgate were invited on stage at a Sex Pistols gig to introduce the band – the game was now box office and everyone, it seemed, wanted to be part of the action.

But for football fever to fully catch-on it was imperative that the hosts lived-up to the hype and expectation of an audience that was growing in interest by the day – so what better barometer of just how frenzied the nation was than playing the European champions of eight years previously at the home of football on a glorious summer evening?

Holland had struggled to draw with Scotland and just scraped past Switzerland, leading some to feel this Dutch team was more stereotyped and less formidable than its free-flowing predecessors; but even so, recent meetings between the two, including a 3-1 thumping at Euro ’88, suggested England had their work cut out to avoid another disappointment.

There was genuine nervousness across the nation ahead of the final group game against a Dutch side who no longer had Cruyff, Gullit and Van Basten but were still able to call upon the services of Dennis Bergkamp, Clarence Seedorf and Patrick Kluivert.

As the teams took to the field that night there was a notable air of confidence, not just in the stands but throughout the England side too. Off the pitch Holland’s huge support was as visible as it was audible thanks to huge swathes of orange around the stadium, which helped to give the game the atmosphere of a cup final. 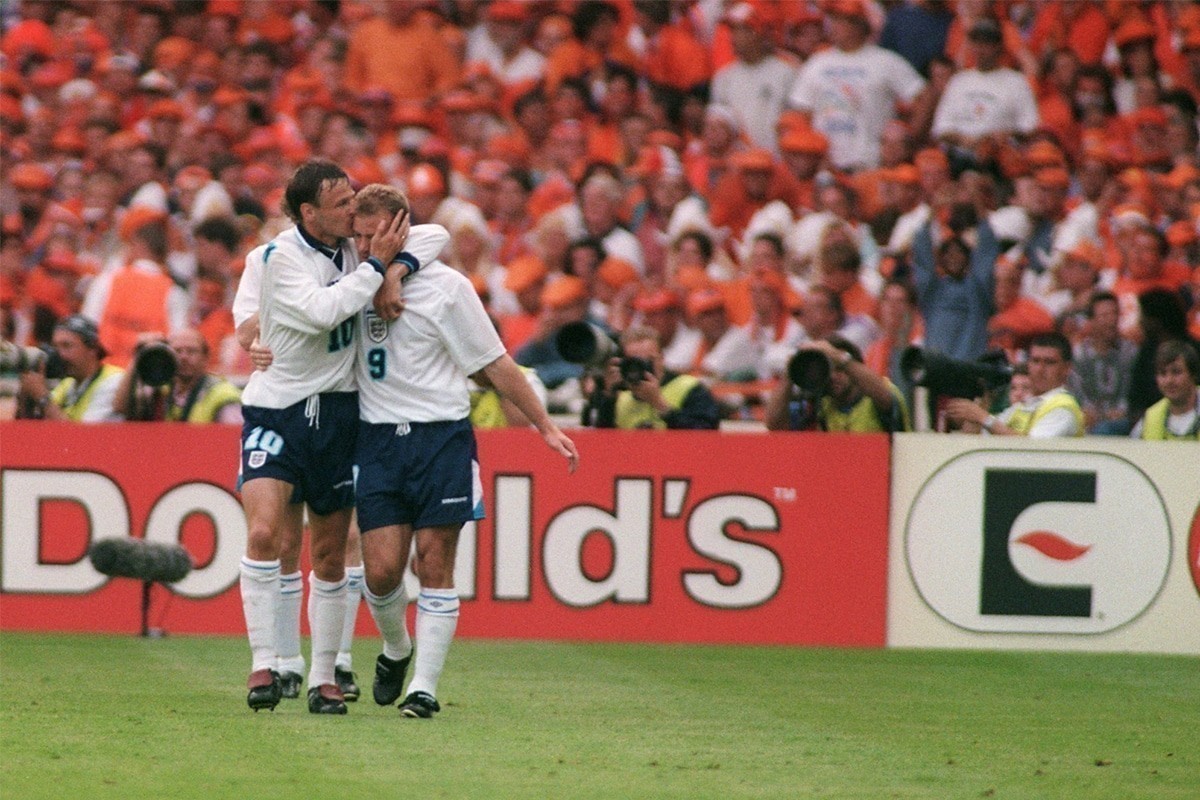 As the camera panned down the England team during the anthems they looked relaxed yet focussed. Paul Ince and Gascoigne were sharing a joke while Gary Neville stared blankly at the floor. Stuart Pearce typically sang his heart out; as did Tony Adams though not necessarily in time or in tune.

So what had brought about this new found attitude seeing as the first two games of the competition thus far had been far from convincing? “Before we played Holland, Terry Venables gave us the most brilliant team talk,” said Paul Gascoigne in Michael Gibbons’ book When Football Came Home.

Gascoigne’s thoughts on Venables’ team talk that night were also echoed by Tony Adams; “He made it clear this was going to be one of the biggest games in any of our lives,” he said. “Every player left that meeting convinced he was better than his counterpart and the Dutch were simply there for the taking.”

Whether it was a using a conventional 4-4-2, employing the services of flying- wingbacks or the somewhat revolutionary “Christmas tree” formation; Venables had installed a belief that English players could pass the ball in the same way that their opponents do and this would be the night that vision came to fruition and in the most spectacular fashion.

As the game got underway both sides were pinging the ball across the lush Wembley surface at a frantic pace and with real quality too. The Dutch had quickly found a rhythm and tempo that suggested, on the pitch at least, things were A-okay while England were moving it around with the freedom and confidence of a team that really believed in themselves.

Both teams had chances early on. From a low Darren Anderton corner to the near post, Alan Shearer shot on the half-volley only for Richard Witschge to clear the ball off the line. Meanwhile at the other end, Aron Winter missed a glorious chance to score from two yards after mistiming a header.

It was clear from the early stages that England had adopted a policy of containment, ready to hit the Dutch on the counterattack when they were overstretched and it was one such counter which put England in front. 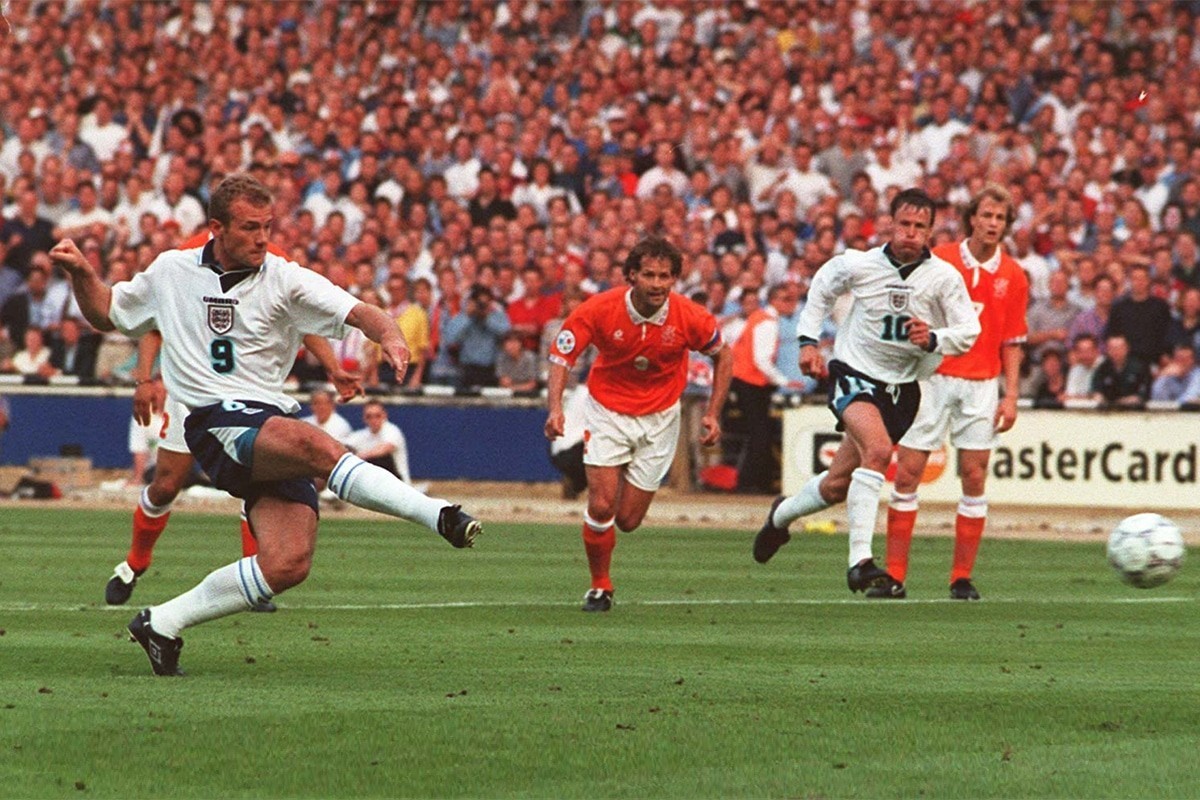 After a pretty even 23 minutes, Paul Ince deceived Danny Blind with a cheeky drag-back, only to be brought crashing to the ground and Alan Shearer stepped up to thump home the penalty. It was a great start but nothing compared to an 11-minute spell at the start of the second half where England score three more.

Sheringham rose wonderfully to make it 2-0 with a header, then Gascoigne created two more thanks to his advances into the box. Sheringham finding Shearer with a side-foot pass that was hammered in for the first. Then, when Darren Anderton's shot was spilled by Edwin van der Sar, Sheringham was on hand to score from the rebound.

The game was as good as over as England fans drowned out their Dutch counterparts in a mass sing-song which lasted for the remainder of the match. Some might not have even noticed that second half substitute Patrick Kluivert had slotted the ball under David Seamen to grab a consolation goal for Holland – but it mattered little.

England had scored four goals against one of the tournaments favoured teams, the first time anyone had done so in any form of competition for 21 years and in that second half sent out a message, not just to their opponents, but to their own players and fans that they were capable of actually progressing in a tournament that was there for the taking.

Initially Terry Venables did his best to play down his team’s efforts in his post-match interview but this became something of a fruitless exercise as the nation went into meltdown as he was still speaking in the Wembley tunnel and words of congratulations were being spoken from everyone including then Prime Minister John Major to Sir Stanley Matthews.

“This makes all the years of hard work, the planning and the worrying worthwhile,” said Venables. “I’m full of pride, because to beat Holland like this means so much to me. I have never known it like this before. It has been special – an incredible feeling of patriotism and unity.” 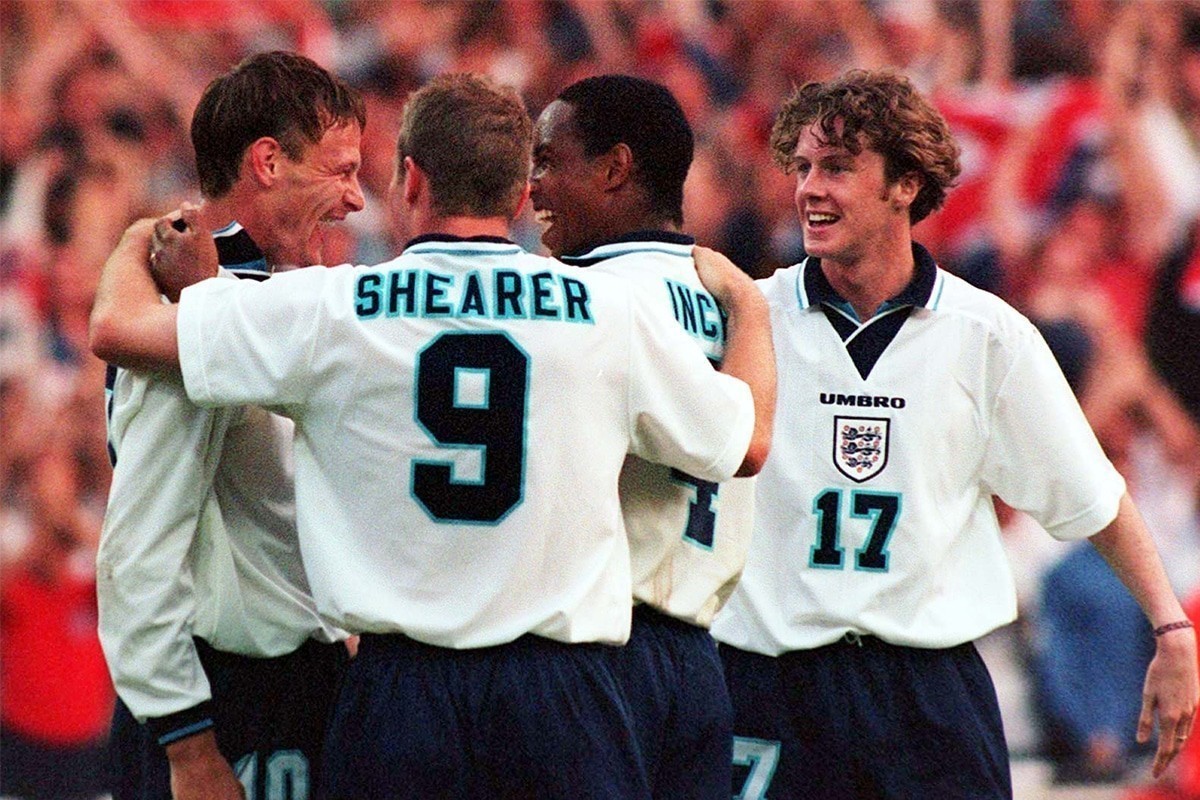 Meanwhile, the English press, who had so often revelled in criticising the English national side could barely contain their delight. “This was the night to let loose,” claimed Jeff Powell in the Daily Mail the next day. “This was the night to commemorate the 30th anniversary of the proudest moment in England’s football history.” While The Independent led with the headline “ENGLAND’S NIGHT OF RAPTURE”. Even Martin Samuel claimed: “Our finest hour? Oh boy, you’d better believe it.”

Ultimately, history shows this famous win didn't prove to be a turning point for the fortunes of the England national team as they were knocked out after a penalty shoot-out by Germany in a thrilling semi-final and haven't progressed as far in any tournament since.

However, what this game did prove was what an England side can be capable of when they are given the confidence and encouragement to play their natural game without being weighed down by restrictive shackles and overburdened with unnecessary tactical limitations.