In a new Football Whispers series about the next, big players of the world, I look at 5 of the most talented, and promising young players coming from various countries in the world. This week, I look towards the current kings of international football, Spain.

Being a Liverpool fan it seemed pretty appropriate for me to start at home. Pedro Chirivella, Liverpool’s deep-lying midfield prospect, is held high as one of the most promising, and talented players in the Liverpool academy system.

His talent on the ball and composure during a game are two of his biggest attributes, playing less as a ‘defensive’ midfielder and more as a player starting attacks and adding an incisive touch to play going forward. Comparisons to Sergio Busquets in position if not in ability have been made, playing in the Pep Guardiola role of seeking to start attacks, taking the ball from the centre back and pulling the strings from the base of midfield.

His ability to read the game is another exciting plus for both Spain and Liverpool, as the latter arguably haven’t had this type of player in his natural position since Xabi Alonso played there years ago.

“Just talking about Pedro Chirivella gives me goosebumps. In England there would have to be 100 Pedro Chirivellas in order to revolutionise English football” spoke Liverpool scout David Vizcaino, high praise from a man tasked with spotting talent the world over.

It seems like it’s a case of when, not if Chirivella breaks into the first team at Liverpool, and with the future of Joe Allen and Lucas Leiva all but certain, the Spanish youngster could see his career reach new heights sooner rather than later.

So, Inaki Williams, the Athletic Bilbao forward isn’t exactly an unknown quantity, but having yet to break through into the Spanish national side, and only playing 4 times for the U21’s, I would say that the 21 year old Williams is yet to truly hit the world stage – but this seems to be a matter of time. Scoring 12 goals in all competitions this year, the right-footed Williams has an eye for goal, especially as he plays most of his games as a wide forward or winger.

Attracting interest from clubs across Europe, including Manchester City and Arsenal, the forward player signed a long-term deal with Bilbao up until 2021 season and having a reported £40 million buy-out clause in his new contract.

Williams offers Bilbao a quick burst of speed, and being one of the fastest players in La Liga, he is more adept at running at players with pace and getting on the end of through balls than being a full-time supplier – crossing is a place for improvement in the youngster’s game. 3 assists for a winger who has played 29 times this season is a poor return. Yet, in the coming years Williams could see himself promoted to main striker at Bilbao as veteran forward Aritz Aduriz comes towards the end of his career. In the long term, Inaki Williams is certain to have his name plastered over walls of Spanish children and take the footballing world by storm. With the type of forwards the club likes, I can see Real Madrid come in for him, especially if Cristiano Ronaldo leaves the club in the coming seasons, but Manchester United or even Liverpool would be wise to keep tabs on the classy, exciting forward. 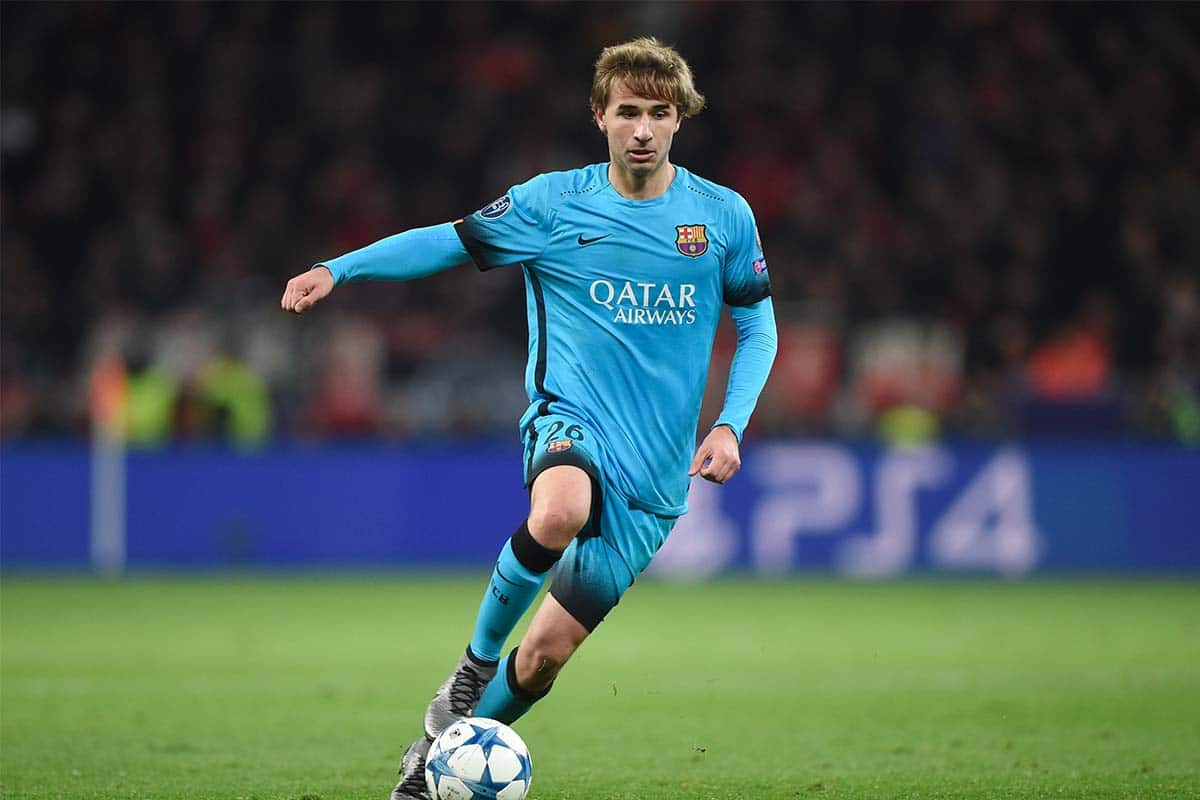 The world’s most famous academy has been stuttering of late. With such a perfect, balanced and revered first team, the one problem held against Barcelona would be trying to get some home-grown, or at least Barca-farmed players into their team. This leaves a slight problem for the youngsters of La Masia, if not for Barcelona’s first 11. One player too good for Barcelona B, but with little chance of getting into the La Liga giants team is Sergi Samper.

Samper has the unfortunate job of trying to break-through in a position that is currently occupied by the best midfielder in the world, Sergio Busquets.

Samper is a midfielder of impeccable passing, something that almost comes as standard with anyone associated with Barcelona. He has been compared to the aforementioned Busquets, along with Andre Pirlo as being a puppeteer, pulling the strings and directing play from a role in front of the defence. Breaking down play and anticipating danger well, defensive work, such as hard tackling and tough, crunching plan doesn’t come naturally to the Spanish midfielder.

Members of the Barcelona youth staff have said from a very early age that Samper is the one to watch, but as his time with Barcelona B comes to almost 3 years, the time to step up seems to be edging closer. This could mean a move away from his beloved Barcelona.

Adrian Marin is a 19 year old left back currently plying his trade at Villarreal. Martin, who has still only made 11 appearances for the Spanish club is rumoured to be on the radar of Barcelona. Marin is a quick, direct left back who enjoying ferrying forward and supporting the attack. Yet to mark his performances with a goal or assist, the young Spaniard has only broken through into the Villarreal team since the end of 2015. A left-footed player with great stamina, he is seen as the natural successor to Jordi Alba in a Barcelona shirt.

After joining the club at the age of 12, Marin has seen his promotion to the first team become smooth and steady, clearly a talent identified early by Villarreal, Marin has become a part of the first team squad as a whole since 2014, when he made the jump from B team to Villarreal’s top tier.

The Spanish scoring sensation of Real Madrid Borja Mayoral has scored goals at every level he has played at, giving him the tag of the ‘next Raul’ by many of the staff at Real Madrid, and described by Madrid manager Zinedine Zidane as a striker who “scores every time he has a shot”. He’s scored 43 goals in one youth season and a hat-trick in a UEFA Youth League game, whilst becoming top scorer in the 2015 European U19 Championships as Spain made their way to the final and laid claim to the trophy. Real Madrid have already made the wise move of signing the striker up to a new contract, meaning he will be at the club until at least 2021.

The players strengths are of course finishing, and whilst he has yet to fully break into the Real first team, it certainly seems a matter of time. With Benzinma suffering injury issues throughout his stay at Real Madrid, and Gareth Bale coming back from injury, it is easy to see Mayoral getting his chance to shine on the biggest stage.

At 18 years old, his movement and understanding of players around him is great, hence the comparisons to Raul, and he has plenty of time to settle down and become him own first team player. How long he will want to wait is anyone’s guess, but it is known that the Madrid hierarchy want to make sure the player does not get away, like academy graduate Alvaro Morata did before him.