Asian football has always been a hotbed of young talent, but only a select few from previous generations have managed to reach their potential. However, the climate of football is changing and the world game truly feels more accessible than ever; it could be the stimulant that ushers in the greatest era of Asian exports ever.

The whole of Asia is blessed with more talented players than ever, and the production line could be set to produce some of the game’s brightest stars of tomorrow. Unfortunately, natural flair is still stifled in some parts of the continent. For example, Singaporean duo Ikshan and Irfan Fandi were recently called up to national service in a development that could potentially prevent the brothers from unlocking their true potential. Nevertheless, there’s more reason for enthusiasm than ever when analysing the state of Asian football, and fans should expect to see an influx into the big leagues over the coming years.

In truth, this list of wonderkids could have easily been extended to 10 or even 20. However, it’s been whittled down to five, and these are the names to look out for over the next few seasons. 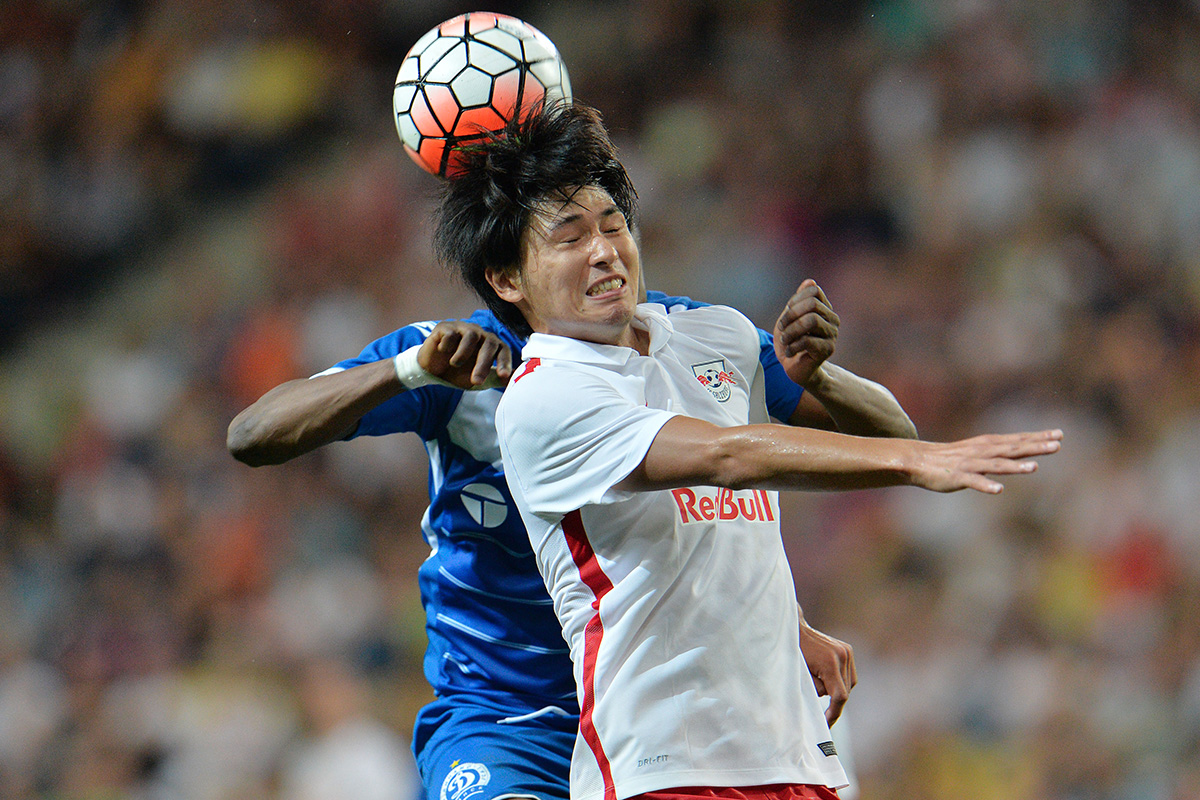 While Asian players haven’t always enjoyed the best of times in Europe, Japan is one of the few AFC representatives to have produced a number of successful exports. On the basis of his 2015-16 campaign, striker Takumi Minamino could be the next.

The Osaka-born 21-year-old is already a double-double winner with the Austrian champions and notched an impressive 10 goals at the Red Bull Arena this term despite also missing part of the season due to his involvement in his nation’s U23 AFC Championship triumph. It was also a season that saw the former Cerezo striker earn his senior international debut in a 1-1 draw with Iran.

Considering his age, it’s a mighty impressive growing CV, which is complemented by an array of pleasing attributes. Minamino boasts great acceleration while his agility and keen eye for goal are helping him to become a truly promising talent.

Minamino has been lightly linked with a potential move to Manchester United over the past year or so, although those talks maybe dead following the change of manager at Old Trafford. It looks likely that the Japanese star will continue his development in Austria at least until his current contract runs out in 2018. After that, a move to one of Europe’s big leagues could be in the offing. 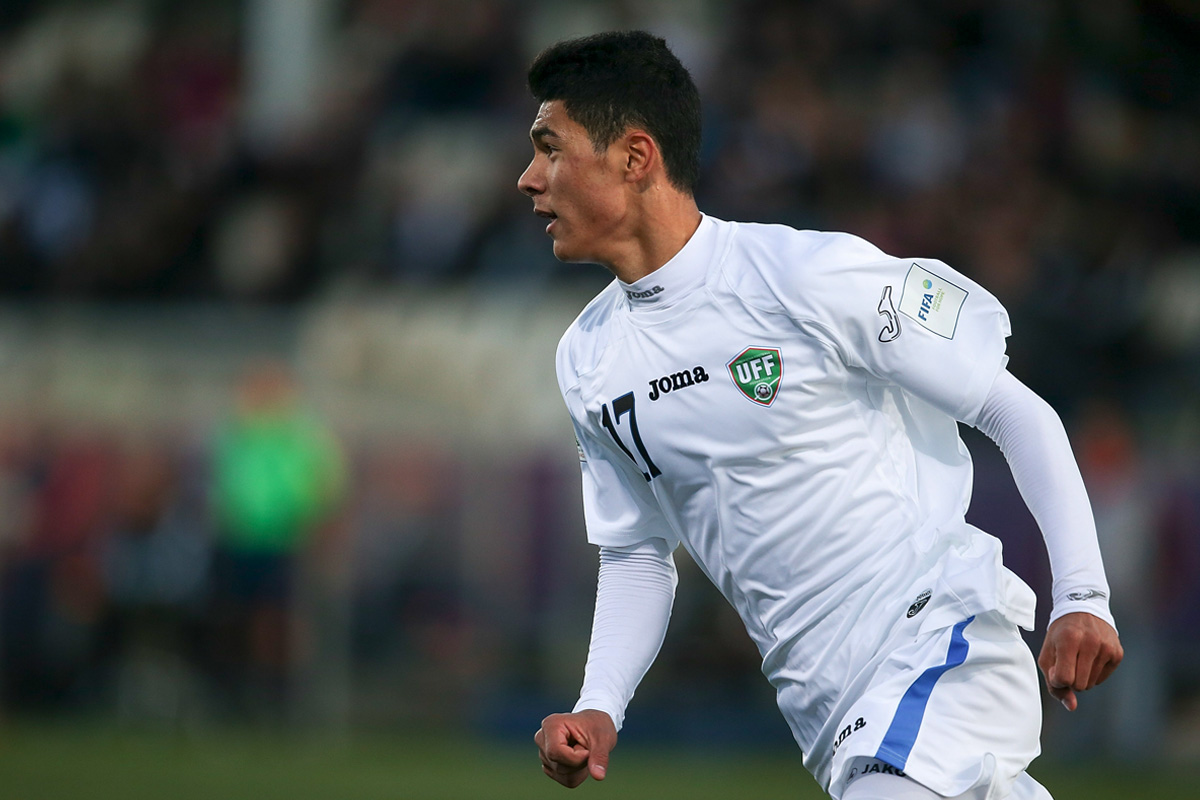 Being named Asia’s Young Footballer of the Year, as Dostonbek Khamdamov did in 2015, doesn’t necessarily indicate a bright future in the game. However, it is an award that’s been won by the likes of Shinji Ono, and the Uzbekistan youngster can be quietly confident about his future in football.

At 19, the technically gifted midfielder is already a regular starter for club side Bunyodkor, helping the Uzbek Professional Football League outfit to two successive Uzbekistan Cup finals. The speedy trickster is arguably most comfortable on the left wing but has performed across the entire attacking frontline, which is another telling quality set to grab the attention of potential suitors.

Khamdamov’s fledgling career has also included great success on the international stage. In 2015, the teen scored three goals at the U20 FIFA World Cup, including a vital brace against Austria in the round of 16. Whilst he couldn’t do much to help the U23s at January’s tournament in Qatar, the attacking midfielder did find the net in two of Uzbekistan’s three group encounters.

Head coach Mirjalol Qosimov also handed Khamdamov a senior international debut in the 2-1 loss to Canada earlier this month, and the youngster is fast becoming the jewel in what is already shaping up to be the golden generation of Uzbekistan’s football history. If he continues to progress at such a rapid rate, it won’t be long before his name is recognised outside of his homeland too. 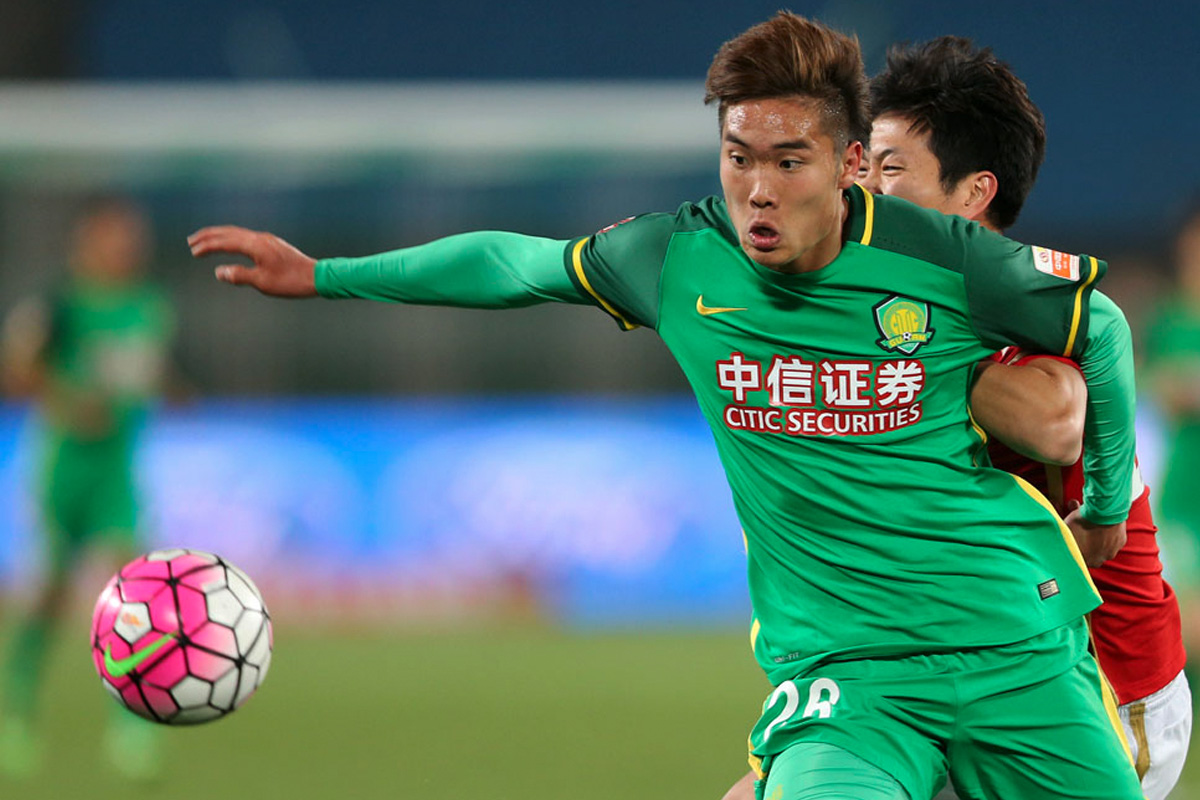 Chinese football is well and truly in the ascendancy. An influx of big money star attractions has finally catapulted the Chinese Super League into worldwide relevance, creating an unrivalled opportunity for homegrown talent to develop and put themselves in the shop window; Shan Huanhuan could be the first to truly capitalise on that opening.

The 17-year-old Beijing Guoan defender is still very much on the peripherals of Xie Feng’s squad, but he did become the division’s first debutant born in 1999 back in April. A breakthrough into the senior team looks inevitable at some stage during the campaign, especially as the the Imperial Guards have struggled in the opening weeks of the current Chinese Super League season.

Huanhuan has additionally shown bags of potential when representing his country at youth level, often occupying a more advanced role and netting several goals for the young Dragons. There has been no sign of a senior call-up anytime soon, but the upcoming Beijing star will already have high hopes of progressing to that stage in the future.

The youngster is contracted to say at the Workers Stadium until the end of 2016, but is already well on his way to earning a renewal in the Chinese capital. Huanhuan is quickly endearing himself  to the supporters at Guoan while his reputation is gaining momentum across his entire homeland. If he can continue to take advantage of increased first team opportunities, his growing fanbase could penetrate international markets too. 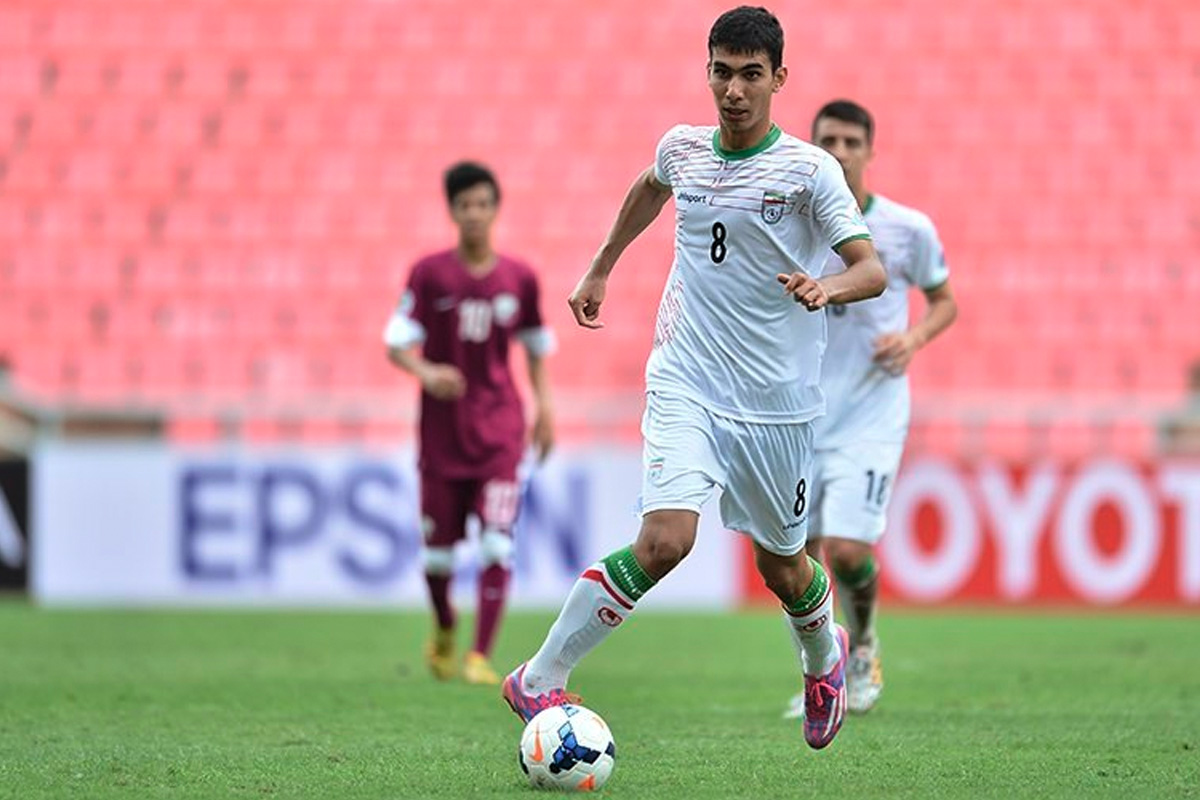 The appointment of former Real Madrid and Portugal manager Carlos Queiroz as national head coach in 2011 has been the catalyst for major improvements in Iranian football. At international level, Iran’s senior squad is now placed higher than any other AFC representative in the FIFA rankings; those progressions have worked wonders for the country in general too, and the emergence of Reza Shekari is another source of huge optimism going forward.

Since making the switch from Moghavemat Tehran to Zob Ahan in 2015, the 18-year-old has quickly established himself as one of the continent’s most exciting young talents. A number of European sides are believed to be tracking his situation, with FC Basel showing the greatest interest after offering a short trial at the end of 2015-16.

At international level, the youngster has quickly climbed through the youth ranks and is already being lined up for the U23s. Most followers expect that it won’t be long before he makes a senior bow for Queiroz’s side too as he begins preparations for the third stage of World Cup 2018 qualification, which gets underway on September 1st.

A number of Iranians are already plying their trade in Europe, particularly in Russia. A move abroad will be necessary for Shekari too, especially if he’s going to maximise the transparent potential to realise the lofty forecasts currently being predicted. However, enhancements to the domestic scene over the past five years make it a far less pressing issue. Iran is producing promising youngsters with greater frequency than ever before, and the Zob Ahan star is easily the most likely to thrive in future years. Remember the name. 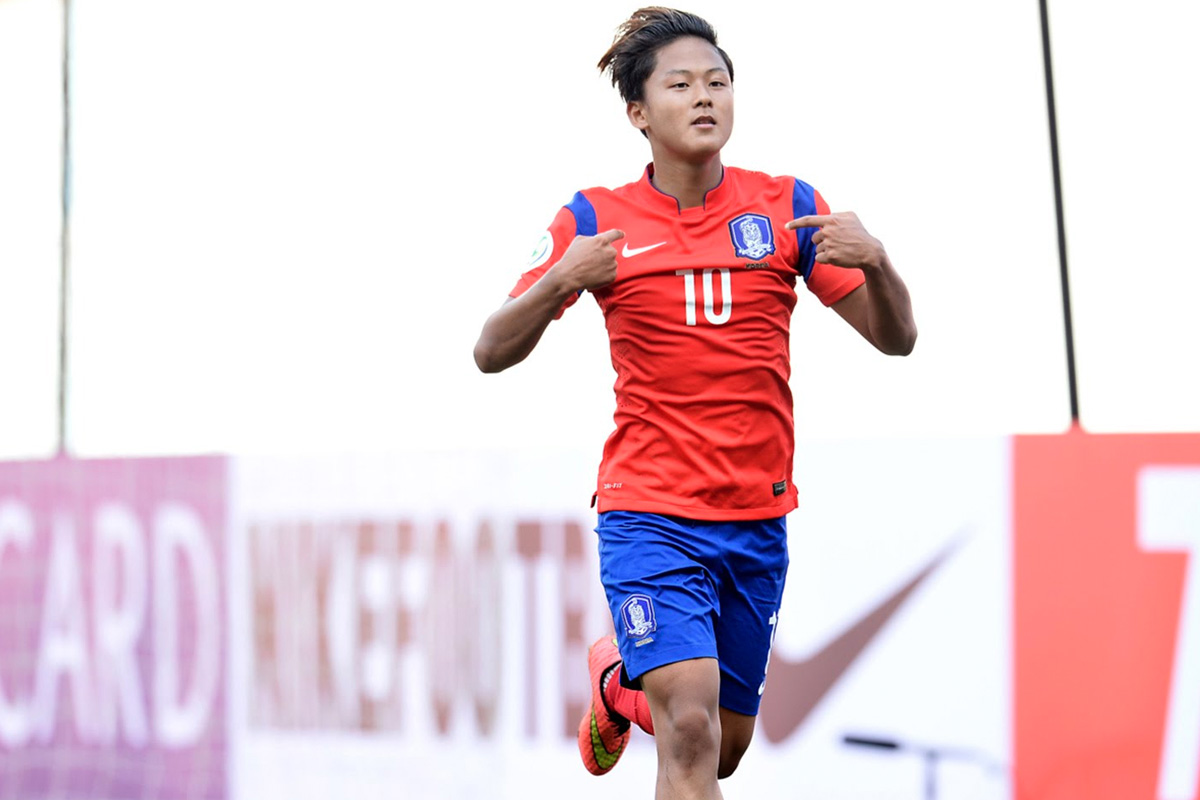 As a football superstar of the future, there’s nowhere you’d rather be than Barcelona’s famed La Masia academy. South Korean star Lee Seung-Woo isn’t just a member of it; he’s the prince being lined up to eventually inherit the Camp Nou throne from his idol Lionel Messi.

The 18-year-old is now finally allowed to represent Barcelona B, following a long delay due to legal restrictions, and is primed to surface as one of the game’s biggest names over the next few years. Many players would crumble under those expectations, not least when a country of 50million is monitoring every move back home. However, that burden is something Seung-Woo has dealt with ever since his switch from Incheon United back in 2011.

At the age of 13, the South Korean broke a youth record previously held by the current Barcelona royal by notching 39 goals in 29 games. If his trajectory can follow Messi’s at even half the speed, he’ll be a world star in next to no time. With two quick feet and a mature reading of attacking situations, the diminutive teenager has everything needed to thrive in an environment that most players could only dream of.

The Suwon-born star’s international youth record makes for pleasant reading too. Most notably, he almost single-handedly dragged his country to the U17 World Cup in 2015, where he played a starring role as his side topped a group including both Brazil and England. He has since moved up to the U20s and could be ready to force his way into Uli Stielike’s first-team plans in 2016-17 while continuing his progression at the Mini Estadi.

Seung-Woo was at the heart of Barcelona’s transfer embargo back in 2014, but the iconic club has high hopes of seeing the South Korean vindicate those efforts. If the Barcelona prodigy does reach the predicted heights, he could become the greatest Asian player ever.