The Telegraph claim Spurs are targeting River Plate forward Sebastian Driussi, a player the club were linked with back in 2014.

The report goes on to suggest the Argentine side are open to offers for the 20-year-old striker even though he’s contracted to the club until 2019, but any deal would involve them getting the player on loan for the rest of the season as well as agreeing to a sell-on clause.

Clubs all over Europe are interested in the latest South American striking sensation but Tottenham boss Mauricio Pochettino feels he can use his influence in his home country to land the star. 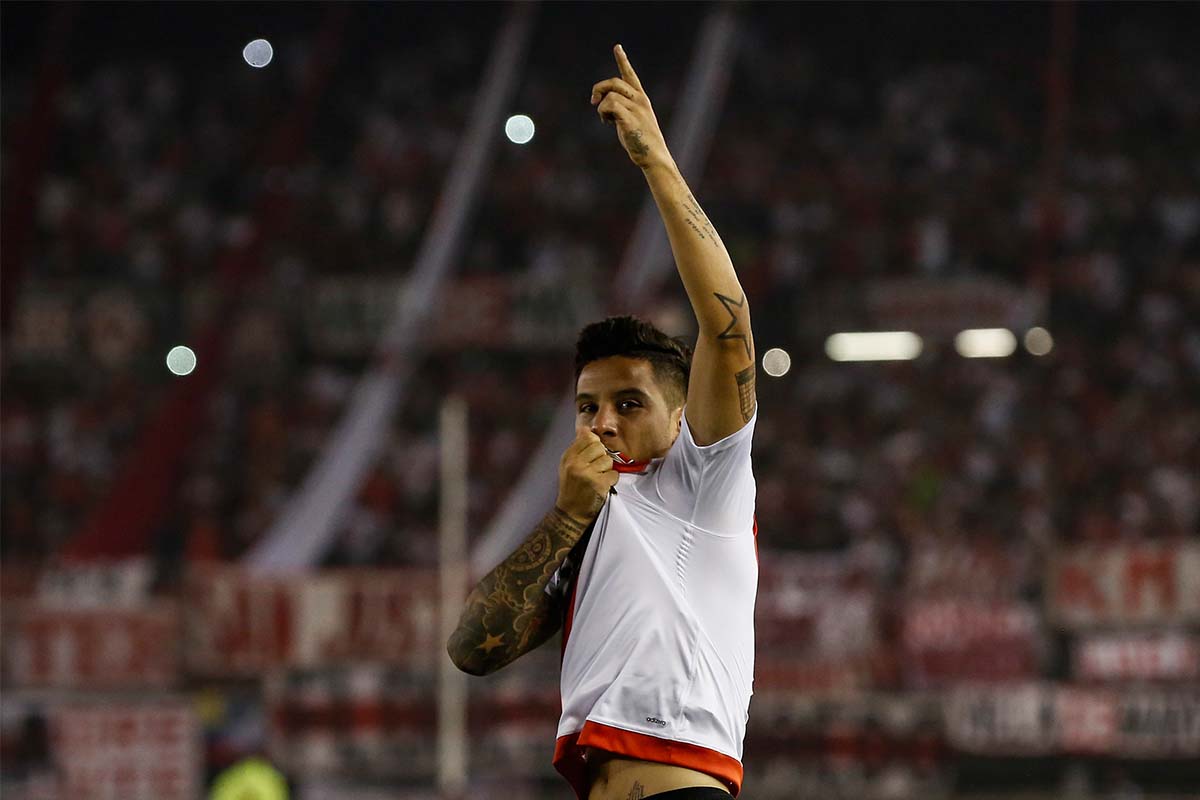 Spurs are in need of a striker who can play not only alongside Harry Kane but also in place of him too. Daniel Levy thought he found his man in the summer when they parted with close to £20million to bring Vincent Janssen to the club from the Eredivisie. To say he’s failed to deliver is an understatement, with many fans now claiming he’s worse than Spanish flop Roberto Soldado.

As football evolves it’s becoming harder to find dynamic forwards at affordable prices but Driussi could be just that.

Complete strikers are now considered specialist forwards. The ones who manage to combine holding the ball up, linking with midfield, playing on the shoulder of the last man, winning aerial duels and popping up in the penalty area to poke the ball home to finish off a counter-attack.

The likes of Fernando Torres, Luis Suarez, Sergio Aguero, Gonzalo Higuain, Robert Lewandowski, Zlatan Ibrahimovic and Kane fall into this category and these are players who have all been invaluable to their teams. It’s because of this that teams spend copious amounts of time and money scouring the globe trying to find the next complete number 9.

An Introduction to the Argentine

Driussi has been involved with River Plate since the age of eight and has made his way through their youth groups. On 2 December 2013, Driussi made his debut for the first team in an Argentine Primera Division match against Argentinos Juniors.

He continued to make sporadic appearances for the first-team but didn’t net his first goal until March 2015. He’s been capped by both the Argentina Under-17s, scoring seven in 15, and the Under-20s, scoring one in eight. He’s yet to feature for the senior squad but with the likes of Lionel Messi, Gonzalo Higuain and Sergio Aguero ahead of him it’s understandable.

So far this season he’s started 13 of River Plate’s Primera Division matches in a two-man attack alongside rumoured Liverpool and Spurs target Lucas Alario. However Driussi is currently the team's top scorer with 10 goals in just 1059 minutes of play and trailing in his wake is 24-year-old Alario, who has six goals to his name having played 54 more minutes.

If a team could spend time in a lab putting together the new breed of number 9s it’s more than likely they’d end up with a player similar to Driussi. He can do everything.

The variety of goals he scores highlight just how versatile he is as a forward. From delicate lobs to thunderous drives, he knows how to put the ball in the back of the net. But what makes him special is how he’s so unpredictable.

Give him space and he has no qualms taking shots on from 30 yards out. Get close to him and he has the pace and skill to blitz past the man. His intelligent movement off of the ball (shown in the pictures above) often means he finds himself being played in one-on-one with the advancing keeper and he’s able to just slide the ball home in a calm and composed manner. Onlookers may claim it’s an easy finish but it’s his movement beforehand which puts him in that position.

He’s aggressive in his style and is always looking to isolate a player and drag them into areas of the pitch they’re not comfortable in. Driussi has quick feet which he uses to free himself of any opposition players but when that’s not possible, he also has this brute strength one would not normally associate with somebody with his frame. He has that stereotypical South American robustness about him.

But he's also capable of the extraordinary due to just how technically good he is, as shown by his stunning 20-yard overhead kick he scored for the Argentina Under-17s side.

Pochettino knows all about nurturing prodigious South American talent, having coached Philippe Coutinho when he was the manager of Espanyol.

They could have quite the player on their hands if Driussi is keen on playing his football at White Hart Lane and not Lyon, another club who are rumoured to be sniffing around. He could well be the striker they’ve been searching for.