There are certain men in football who need no introduction. There are men who don’t deserve an introduction, but there are men, few men, who do not need one. The pioneers, the legends and the tactical raconteurs. They tell stories, legends, with their tactics. They shape a club, and usually shape an era. They mould their very image like putty without any effort needed. They live a life of feeling, emotion and hold an other-worldly reputation. There are certain me in football who need no introduction. Sir Matt Busby is one of these men.

Sir Alexander Matthew Busby was born in 1909 in North Lanarkshire, Scotland to Lithuanian parents, Alexander and Nellie Busby. Sir Matt, being born during the time of the first World War met tragedy early, when his father, a miner by trade, was called up to the army and was later killed from the bullet of a sniper in 1917. Matthew wasn’t yet 8 years old.

The loss of his father, coupled with the loss of 3 of his uncles to the war left his mother, Nellie, alone to raise him and his 3 sisters until she remarried a 2 years later.

Growing up, Busby loved football. During his teen years he worked and played football until Manchester City, close to promotion at the time, applied to sign him from his then-club Denny Hibs in Scotland. And the rest they say, is history.

Sir Matt sustained a playing career of 319 split between two of Manchester United’s biggest rivals – the aforementioned Manchester City and Liverpool, but it wasn’t until the latter club offered him an assistant managerial job post-World War 2 that Manchester United took notice.

Busby, for all of his experience of football on the outside, and management on the inside of the army (he coached the Army Physical Training Corps during the war), knew exactly what he wanted. Exactly how he wanted football to be played. And this wasn’t in line with the way the then Liverpool board of directors wanted to play. A truce was met and a split was agreed between the player and his club and Sir Matt was allowed to move on from Merseyside to search out pastures new. And that he did. These pastures, however, came from the Red of Manchester. The Red Devils.

Manchester United had been a yo-yo club until Busby arrived at the end of the Second World War. Challenged by relegation, poor financial footing and strong local rivals, United were never too far from ceasing to exist. Socially or literally. Something needed to change. 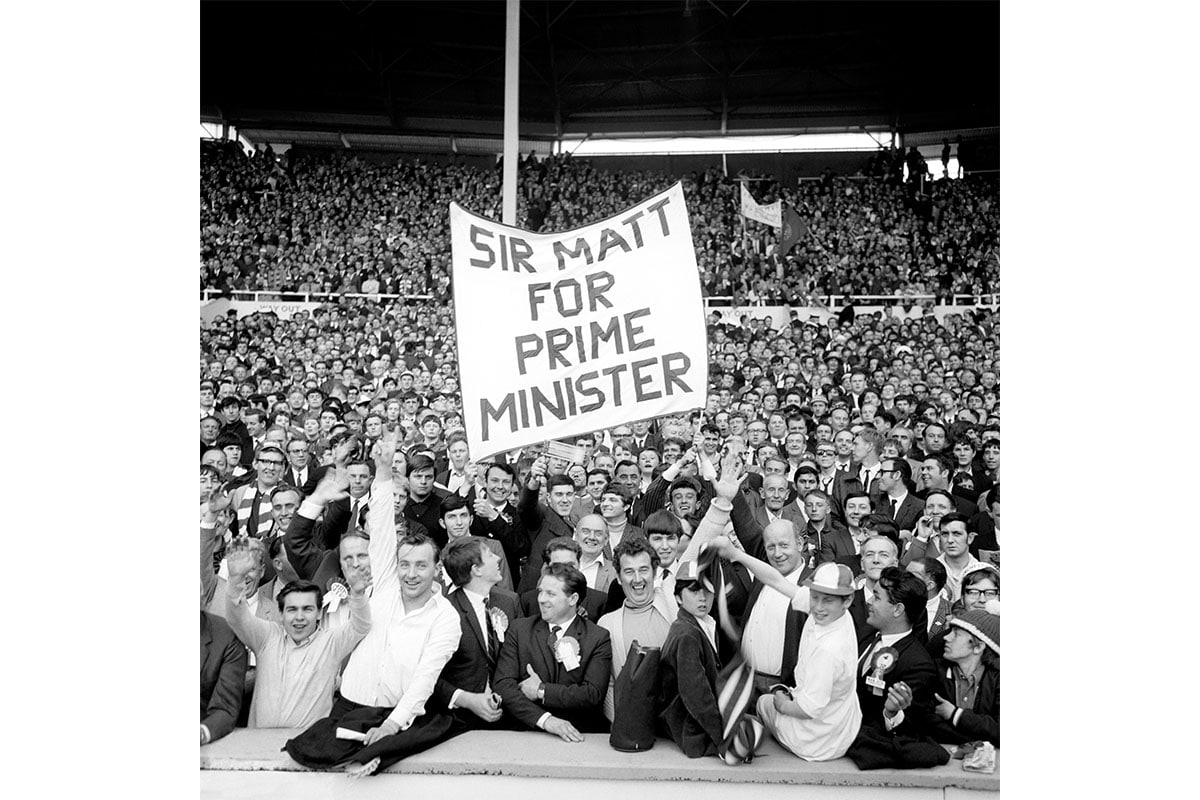 Sir Matt, for all his skill and ability knew the club needed a saviour. Calling for total control of footballing affairs, from coaching and picking the team to choosing players to sign, English football had never seen such things. Little did they know, but Manchester United and Sir Matt were about to change the face of football forever.

Things quickly looked up for the North West side. Busby and his assistant manager Jimmy Murphy added youth and local talent to the team quickly. His reliance on locally trained players made him a unique and endearing prospect to United. At a time of buying players from other clubs, much like today, Busby trusted his youngsters to deliver on the pitch. And that they did.

Busby took to United like a duck to water, finishing second in the league on five occasions before he finally lifted the title in 1952, a mere 7 years after he took over. The similarities to another Sir in Sir Alex are stark and clear. And like Fergie, Busby was one of the greatest.

In 1957, Busby wanted more. The season previously, Chelsea wanted the chance to enter the European Cup as the first ever English team. The Football League, however, wanted none of it, denying the London club the chance to test themselves against the Real Madrid’s of the world. United were not about the let that happen. United became the first English club to enter the European Cup.

“The Busby Babes” was the name given to the youthful princes of the English First Division. An average age of 21, the United team had the world at their feet. Back-to-back title winners in the 50’s, it looked like only a matter of time before the side held Europe in their hands. But what happened next threw football in the true context.

It was 6th February 1958 and Manchester United was flying home from the European Cup quarter final vs Red Star Belgrade. Stopping to refuel in Munich, Germany, the plane carrying players, journalists and club officials crashed on its third attempt at a take-off. 23 people died. 20 of which died upon impact. The crash would derail the club and stun a country. It left a dark shadow and a lasting memory. A memory of a tragedy. 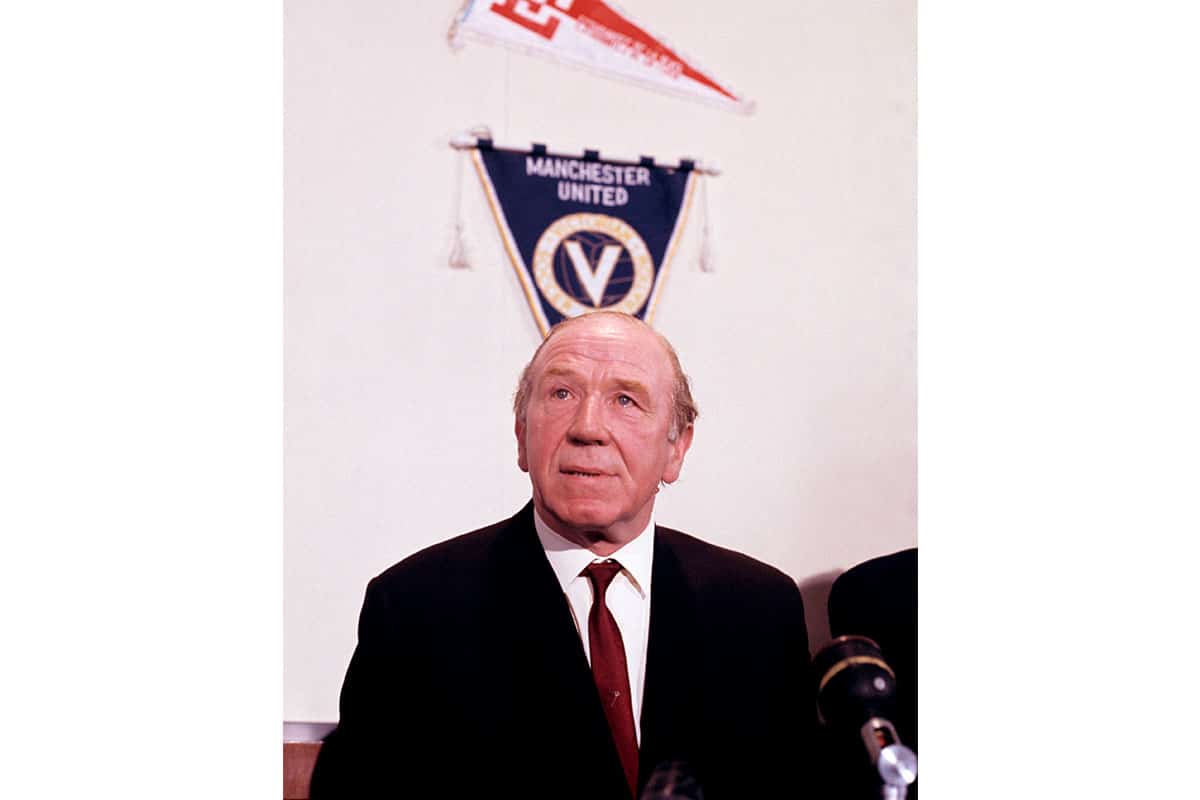 Luckily, Sir Matt survived the horror of Munich, but what was left of the club needed a fighter and a unifying symbol. A humble, kind man, Busby became that symbol.

Busby came back into the side part time at the end of a playing season that saw United lose to Bolton in the FA Cup final, but he was to be full-time manager again soon, when he was tasked with building a new-look Manchester United side after the tragic events of the previous February. And this could have been his lasting legacy and his greatest achievement. Building a side that continued to win.

Busby, with the help of his backroom staff, scouted players from outside the club, a change in approach from the early days, but successful to boot. Dennis Law and George Best were amongst the players bought to make United competitive again, and that they did. Winning the league title again 8 years after Munich, and again two years later in ’67, United announced themselves again to the world. But the best was yet to come.

The European Cup, the very trophy that had spawned the air disaster 11 years previous was still the envy of the world. The United manager was no different. Determined to have Manchester become the centre of the footballing world, Busby led the club he loved, the club he had helped rebuild to the first European Cup to be won by an English side. The final was a watershed moment. A moment that proved finally that United were one of the great European teams. Demolishing Benfica 4-1 in the final, it was the players, the calibre of footballer that United now employed that held so much promise. Bobby Charlton, Dennis Law and George Best had all been European Player of the Year at some point, and this European Cup solidified their place as some of the greatest players playing the game in that era. And solidified Sir Matt Busby as the greatest manager of that era. Creating not just one team, but two fine teams.