It’s hard to think of a football league with a more diversely famous set of owners than the Indian Super League. The ISL brings together individual superstars such as cricket icon Sachin Tendulkar, as well as Bollywood actors Abhishak Bachchan and Ranbir Kapoor. Then it throws in Atletico Madrid and Fiorentina. These are just a few of the people and organisations behind the league, which was founded in 2013 on the backs of footballing heroes like Alessandro Del Piero, Robert Pires and David Trezeguet.

Those three were a small number in what has been a wave of importation as big names travel to India in the twilight of their careers. Their personal motivations may be financial in nature, but they are part of a much bigger picture, as the ISL attempts to grow football in the world’s second most populous nation.

The league comprises eight teams, each representing one of the country’s five regions. Delhi Dynamos are the only franchise in North India, while South India possesses two in Chennaiyin and Kerala Blasters. East India is home to Atletico de Kolkata, who are unsurprisingly the franchise part-owned by La Liga giants Atletico Madrid. Meanwhile the aptly named NorthEast United represent the Northeast. West India has more ISL franchises than any other region, with FC Goa, Mumbai City and Pune City all within its confines.

Having reached the end of its second season last December; a campaign which featured stars such as Roberto Carlos, Lucio, Marco Materazzi, Florent Malouda and Nicolas Anelka among others, the ISL appears to be enjoying success in its formative years. Bankrolled by IMG, Reliance Industries and Rupert Murdoch’s Star India, the competition has benefitted from hefty financial backing and no little marketing.

Attendances have been strong since the league’s inception. Stadiums were full in 2014, its first year. Kerala Blasters and Atletico de Kolkata had average attendances of over 45,000. Other clubs such as NorthEast United, FC Goa and Pune City filled over 70% of their stadia capacities. The more promising detail is that these numbers are going up. In 2015, all bar one of the eight ISL teams saw improved attendances.

Arthur Papas, who was assistant to the Goa club during this period, believes the crowd support will boost the image of football in India, saying, “A packed stadium will improve the product you see live on television all around the world.” Fortunately, the world is watching; the ISL is shown in Australia, the USA, Canada, North Africa, continental Europe, the Middle East and South-East Asia by a variety of broadcasters.

The main focus, however, is on harnessing local interest; a task some argued would be difficult given the country’s love of cricket. Disgraced former FIFA general secretary Jerome Valcke stated that, “It’s not a question of competing with cricket but I think India is big enough to have a second sport.”

Others feel the aim should be higher.

While many in the public eye know Stevie Grieve for his work on Ten Sports’ football analysis show ‘The Mind Game’, he is also the head of coaching for Baichung Bhutia Football Schools, a project dedicated to the development of young Indian footballers. He feels that football was already thriving in India prior to the ISL’s formation.

“There are football areas – Goa, Bengal, Kerala, the Northeast, so football is already popular,” he told me. “The ISL has harnessed that popularity, marketed it brilliantly and made it accessible.” 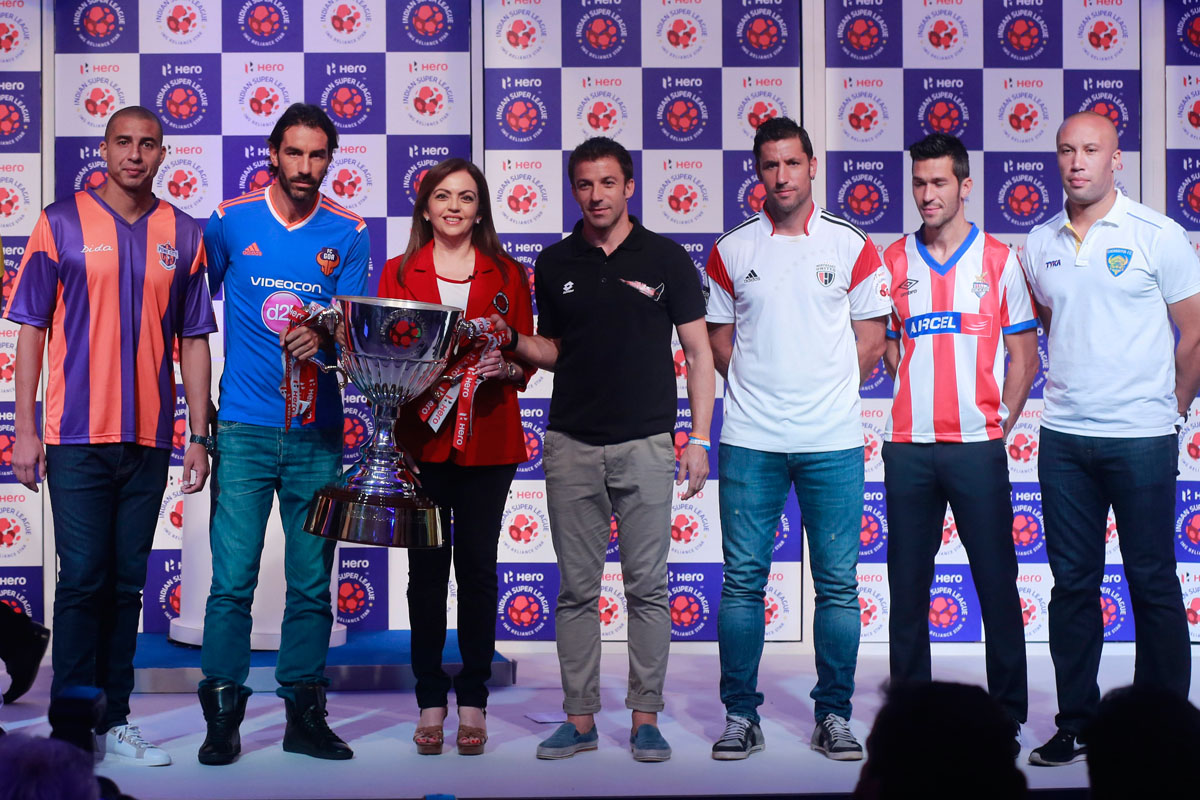 Grieve also believes that football can overtake cricket in India, but not due to the ISL. Explaining that cricket’s popularity in the country had a lot to do with India’s winning the 1983 World Cup and the subsequent investment put towards its development, he feels that football will grow “because of the way Indian parents and kids socialise – football takes two hours, cricket takes eight. Kids get to be active and run around, cricket is much less active. So naturally, (football) is more popular with the modern Indian people. It will take over in 10 years.”

There is a difference between exploiting the tendencies of a football support base and enriching the domestic football culture, however and, while the ISL has utilised the great potential of support for football in India, there are uncertainties as to how effective it will be in actually developing the sport. After all, India already had a football league – the I-League – and there remain doubts as to how the two competitions can co-exist to the benefit of Indian football.

To assuage these doubts the marketing benefits of the ISL are once again extolled. All India Football Federation (AIFF) president Praful Patel argues that the “I-League is the league of India. (The ISL) is a tournament which brings more attention and extra popularity, it’s like a booster dose.”

I-League president Sunando Dhar also argues in favour of the ISL, stating that the quality of the I-League has “gone up because of the impact and inspiration of the ISL. Interest in football has always been high in India but mostly for European football, which has been cannibalising Indian football. The positive is that this trend is now starting to change.”

The ISL does seem to be having a positive impact on the I-League in that the latter’s television ratings went up by six per cent in 2015 compared with the previous year. Clearly, the marketing campaign is working. But to achieve sustainable success the ISL has to have a strategic vision, something which is perhaps encumbered by it’s not being the only national football league in India.

In an article for The Blizzard, Dileep Premachandaran remarks that the ISL “has only made the Indian football scene more confusing. For Indian football to progress, there will need to be an ISL/I-League merger.”

This is an opinion Grieve concurs with. He also believes that more should be done at a grassroots level to develop local talent, saying, “In terms of facilities, it’s not much different from the I-League. You could say that there may be better coaching in the ISL as the foreign coaches have decent pedigrees but if there is nobody on the staff who understands India and Indian players, they struggle,” before adding, “Only a handful are doing anything worthwhile (with) academies to develop more coaches and better players.”

Indian football appears to have plenty of promise though, in order not to obscure it but tap into it, the ISL must possess a coherent long-term plan. The league is attracting interest, however to cement its legacy, its attentions must turn to the future. That means focusing not just on marketing star attractions from abroad but also on youth development, coaching and the maximisation of domestic talent.
The author would like to thank Stevie Grieve for his time and assistance. Stevie is Head of Coaching for Baichung Bhutia Football Schools and works as a TV pundit for Ten Sports. Follow him on Twitter @Steviegrieve.