The incredible rise of Gareth Bale came from somewhere and everywhere and nowhere. We’re all familiar with the story. Promising left-back starts his career as one of the first bright, young talents off the Southampton production line. Going through some tough, testing times at his next club Tottenham, Bale explodes after moving from his original role to a left-winger and the rest is recent history. And what a recent history.

Once at Southampton he started drawing attention, too. Making his first appearance for the team aged 16, Bale began to establish himself as one to keep an eye on. An array of goals from free-kicks brought the spotlight towards Southampton’s academy (previously producing Theo Walcott, the only other player younger than Bale to play for Saints) but also towards to left footed player himself.

Within the year of starting for Southampton for the first time ever, Bale had earned the title of Welsh Sports Personality of the Year by the BBC and the following March, the Football League Player of the Year. In a galaxy of stars, the young Welshman’s were beginning to align.

You can’t show outstanding quality in the divisions below the Premier League without catching someone’s eye. Rafa Benitez of Liverpool and Sir Alex Ferguson of Manchester United were strongly rumoured to be interesting in the new Welsh wizard, but it was Martin Jol of Tottenham Hotspur that sealed the deal. Or depending on who you believe, it was Damien Commoli who sealed the deal.

Soon after having Bale added to his squad, Jol was sacked after facing a poor, unflattering run of results, including losing the two opening games of the season against Sunderland and Everton. In came Juade Ramos from Sevilla. His first season in charge of Tottenham was coated in mediocrity, and unfortunately for Bale, his was worse, as injury ended his season in mid-December.

The next couple of seasons were largely unimpressive from the player, with Benoit Assou-Ekotto sealing a first team place ahead of him. Come January 2010, though, things were about to change.

Harry Redknapp’s hand was forced in a way. Spurs’ consistent, steady left-back in the aforementioned Assou-Ekotto sustained an injury, so as second choice left-back, Bale was drafted in to try his hand – or his foot – at first team action once again. The start, in the FA Cup, was the beginning of something rarely seen from an international from the British Isles.

I don’t want to concentrate too much on the story of Bale and Spurs, but it’s hard not to marvel at how quickly it all turned round for him. The move to accommodate both himself and Assou-Ekotto was one that will no doubt be talked about in years to come. Redknapp during that period of time at Spurs seemed to have the golden touch, everything he put his hand to shone bright. Once Bale moved to the left-wing, it lead to one of the most explosive changes in fortune in Premier League history. 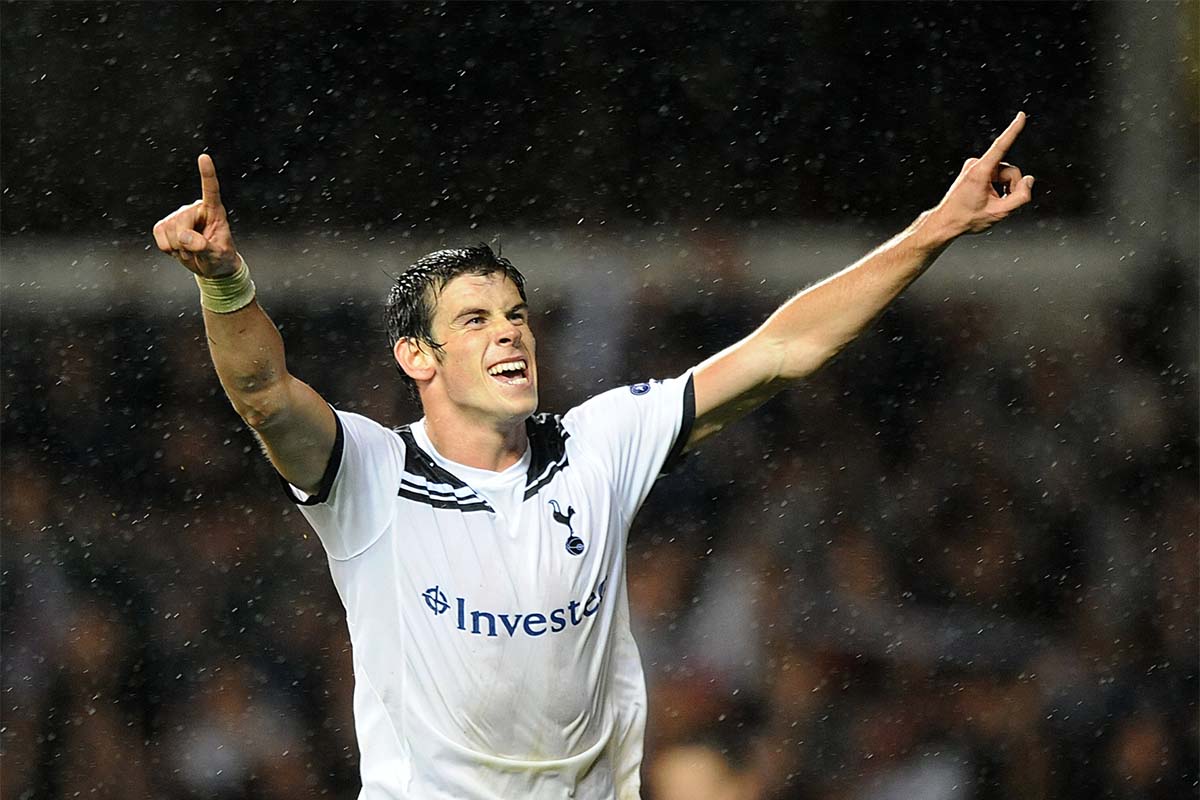 Gareth Bale played 142 times for Spurs, scoring 42 goals in the process. Yet it was the presence and impact he had on almost any game that turned heads in the highest bracket of European football. With every touch of the ball and moment of acceleration, Bale would turn a game on his head. Once he got going, there was rarely a game that he didn’t influence for the better. It takes a special kind of character to be able to do that. That is a special kind of character that top clubs will pay for. That kind of character Real Madrid were willing to pay for. And pay big.

Spurs’ chairman Daniel Levy likes a run-around. He’s the tough, cool character most football clubs would want in charge of their affairs. He’s happy to spend money, happy to back his managers and knows when to reward a player with a deal. He sees the value and the valuable. And that is an important trait in itself. So it would make interesting listening if one could hear the call between Levy and Real Madrid’s representatives when they eventually confirmed their interest in the Premier League’s best player.

The summer of 2013 was dominated by one transfer story in particular. This was the story of Gareth Bale and Real Madrid. However always grasping at the chance to show his mettle, Levy grappled and held and fought his way to keep the player (or get the best price, however you look at it) for as long as realistically possible. And the best price he got. An undisclosed transfer was agreed, with common knowledge stating that £80 million+ was the figure, breaking the world record for a transfer fee paid. Levy had won the battle with Real, even if the war was to take along while to win. Spurs got an injection of cash that is only being invested properly now, under their current manager Mauricio Pochettino but most importantly of all, Real Madrid got their clean, marketable and talented left-wing sensation. Gareth Bale was a Madrid player.

Since then the player has lit up La Liga and the European stage like few other British players have on the continent, scoring at a rate of better than a goal every two games. Bale’s pace, power and accuracy have become the perfect accompaniment to the excellence of Ronaldo. But with the latter beginning to struggle for reputation across Spain and rumours flying about his possible return to United, the stage is set for Bale to become one of the most influential players in world football.

Few players take a U-turn at such an alarming rate as Bale did in his early career at Tottenham, but once Gareth Bale got going, it was not so much a U-turn he performed, but taking off into another satisfier. The man from Wales has made waves in Spain. His next stop? France 2016.