Prior to joining AS Roma as a 13-year-old back in 1989, there was quite the battle to secure a certain Francesco Totti. After developing his craft at local clubs Fortitudo, SMIT Trastevere and Lodigiani, Roma scouts Aldo Maldera and Gildo Giannini, the latter being the father of one of his idols in Roma legend Giuseppe Giannini, spotted him and immediately recognised his immense talent.

Just when Roma thought they'd snapped up the homegrown prodigy, however, Lodigiani received bids from AC Milan and Lazio. The Rossoneri even put in an offer of around 100 million lire, but after a necessary consultation with his mother, Fiorella, Totti's decision was an easy one, emphatically choosing his beloved Roma.

Since making his debut as a 16-year-old, Totti's enjoyed a remarkable 27 year uninterrupted spell with the Giallorossi,  which has seen him develop into the iconic hero of the red half of Rome that he unquestionably is today. Indeed his nickname “The King of Rome” tells the story of how well worshipped and loved he is in the Eternal City.

Over the course of his incredible, history making time at the club, his list of achievements is nothing short of spectacular. While he's often criticised for only having won one Serie A title and two Coppa Italias with Roma, individually his accomplishments are truly extraordinary.

With over 750 appearances and over 300 goals, the most of any Roma player in history in each category, his longevity and prolonged brilliance have made him arguably the most influential player to ever feature for Roma. Moreover, Totti's superlative 246 league goals place him second on the all time Serie A goalscoring charts, not too far behind Silvio Piola on 275. The fact Totti's never really been an out and out striker only serves to make his record all the more impressive.

Being third in the list of most Serie A appearances of all time on 600, just behind Javier Zanetti and Paolo Maldini, who are on 615 and 642 respectively, coupled with the fact he's so close to Piola's scoring record, are undoubtedly key reasons behind his desire to keep going.

While he's coming to the end of his much storied career, which has seen him become a synonymous symbol of both his club and the city, it's important to remember just what a special player he undisputedly was on the pitch too.

Totti's consistency over such a long period of time has been nothing short of spectacular, as he's always scored goals, despite continually having his role altered. Having to persistently reinvent himself has become something Totti has become extremely accustomed to and without doubt the key turning point of his career arrived when Zdenek Zeman, who's fondly remembered for his chain smoking and interesting training methods, took over Roma's managerial reigns back in 1997.

Zeman instantly saw the tremendous quality Totti possessed and, in a season where Totti inherited the coveted number 10 shirt, he thrived. Zeman's decision to deploy him out on the left wing, with the freedom to drift infield and roam across the attacking third as he pleased, worked wonders, as Totti emphatically announced himself to supporters all over the country. He scored 25 goals in the Bohemian tactician's two seasons, while also showing off his superlative technical gifts. Although Totti's form ultimately didn't earn him a call up to Italy's 1998 World Cup squad, his efforts certainly didn't go unnoticed as he was awarded the Serie A Young Footballer of the Year for the 1998–99 season. 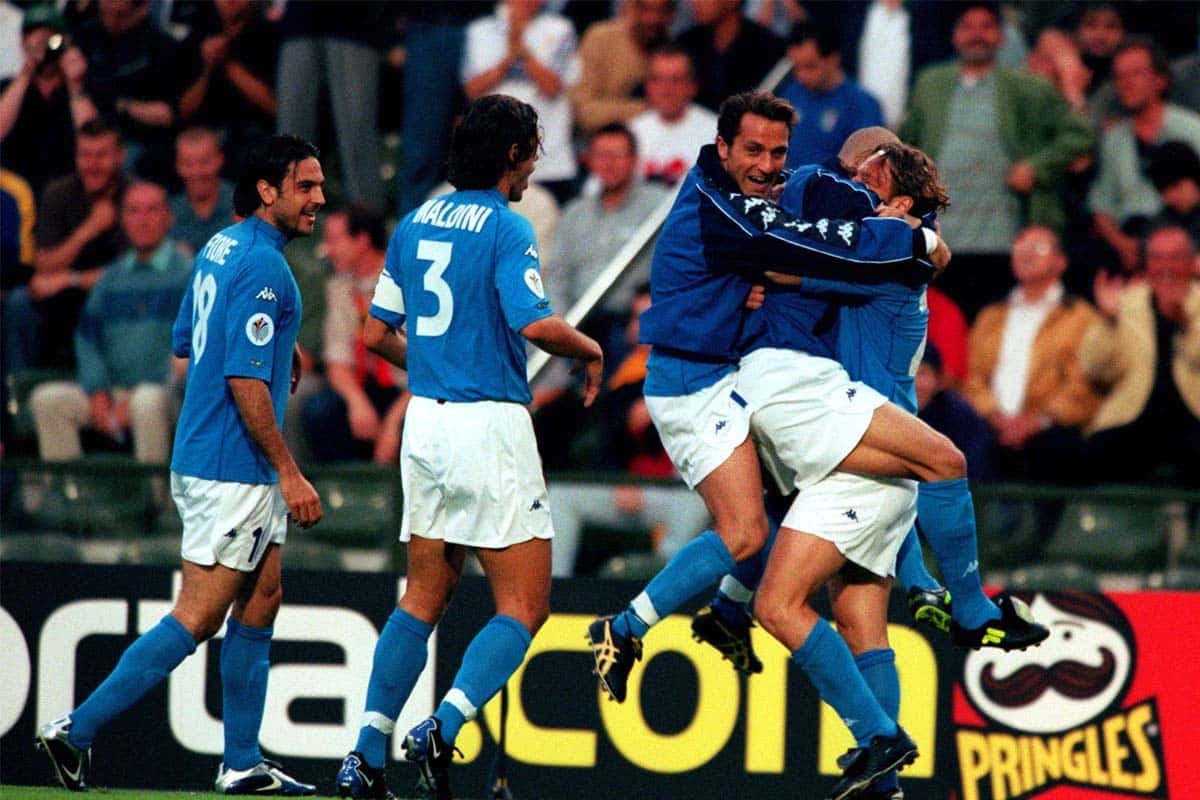 When Zeman was asked his opinion on who he believed were the best three players in Serie A at the time, he replied: “Totti, Totti and Totti.” His admiration was evidently clear for his star man, who he even installed as club captain in 1998, aged just 22.

Once Fabio Capello took over in 1999, Totti was then thrust into his natural trequartista role behind two strikers, a position that saw him produce some absolutely scintillating football. Operating behind Vincenzo Montella and Gabriel Batistuta, his playmaking qualities really animated his side's work in the final third, with his wicked passing ability to unlock the many well regimented defences across the nation proving especially instrumental.

Oozing enthusiasm, creativity and intelligence, Totti played a starring role in helping Roma achieve their third ever Scudetto in the 2000/2001 season. By winning the title, that outstanding Giallorossi outfit, which also included the likes of Hidetoshi Nakata, Emerson, Walter Samuel and the aforementioned strike force, ended an unsatisfactory 18 year drought. And Totti's impact on the stirring triumph was unmistakable.

As part of Roma's lethal attacking unit, he bagged 14  goals and supplied and created countless others, in a season where he, Batistuta and Montella staggeringly scored 47 of their club's 68 league goals.

To cap off his sensational season, the Golden Boy was crowned Serie A Player of the Season and the league's best Italian player.

Thereafter under Capello he continued his splendid form and remained one of the premier players in Europe, but when Luciano Spalletti arrived in 2005, the then 30-year-old underwent arguably his most influential positional variation.

With Roma traveling to Sampdoria in December of 2005, Spalletti was ostensibly forced to play a 4-6-0 system due to all of his traditional forwards being injured. Totti, of course, played as the highest of the central attackers and, as a result of his exemplary performance doing so, Spalletti opted to adopt Totti in this role on a permanent basis. The infamous “False 9” was now born and what a masterstroke it worked out to be.

Courtesy of his supernatural ability to identify and utilitise space, his vision to pick out seemingly impossible passes, his awesome shooting powers and his exquisite ball control the position suited his enviable set of attributes perfectly.

Immediately following the move, Roma astonishingly won their next 11 matches in a row. At the time, the great Pele even noted Totti was “the best player in the world”.

“I preferred playing behind the strikers. I almost liked making assists more than I did scoring. But when I became a sort of centre-forward, I discovered that I like scoring goals. And now I don't want to stop,” said Totti.

Despite notching 15 goals in 24 games from his new post, he suffered a fracture of his left fibula and ligament damage against Empoli in February 2006. Crucially, however, he recovered in time to feature towards the end of the season and to win the 2006 World Cup with the Azzurri. 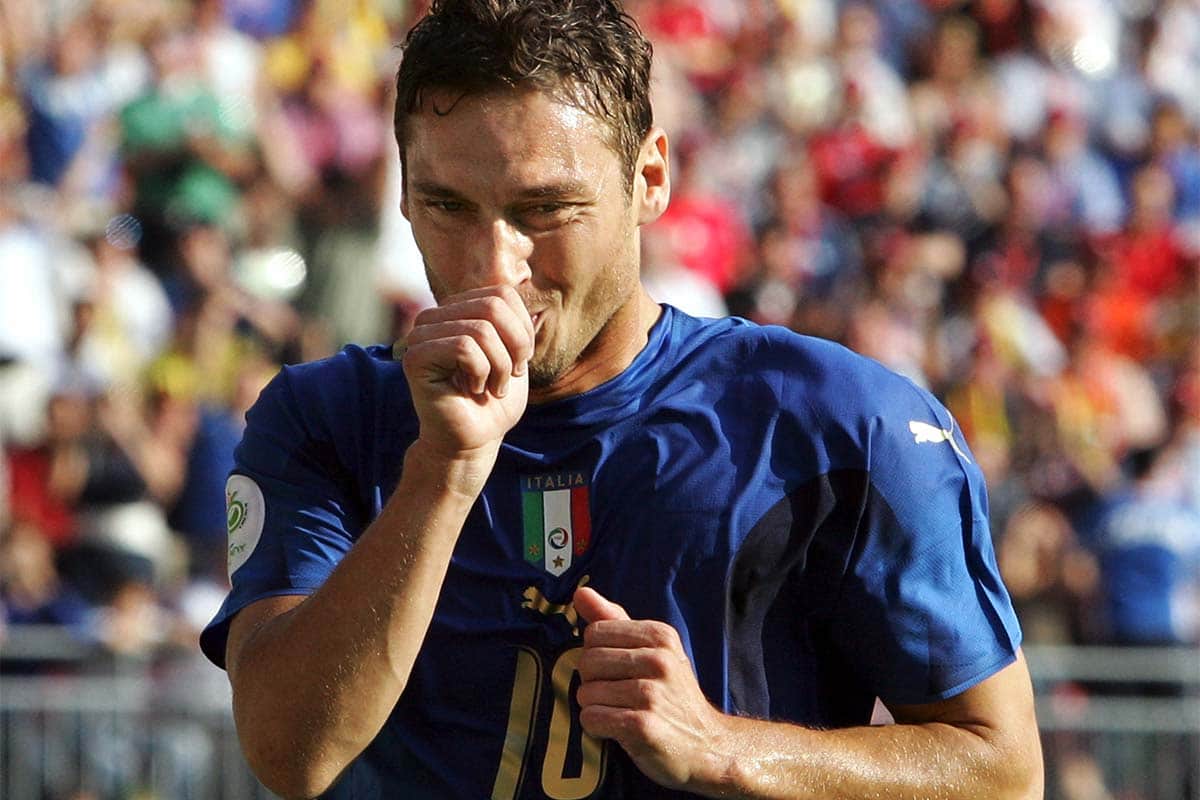 The following season would prove to be the most prolific of his career, as he racked up a stunning 38 goals in all competitions. Lifting the Coppa Italia and claiming the European Golden Boot trophy served as fitting rewards for his masterful work.

Over his four year spell working under Spalletti, Totti notably averaged over 20 goals a season, in what was the most successful period of his time at the club.

Since Spalletti resigned in 2009, Totti's adaptability saw him continue to be a key figure at the club, despite the numerous managerial changeovers that ensued. With Claudio Ranieri, Vincenzo Montella, Luis Enrique, Zeman for a second spell, Rudi Garcia and now Spalletti again having all taken charge of the club in the last seven years, it's a testament to the great man's versatility, dedication, and quality that he's managed to remain relevant in the rapidly changing modern game.

“Totti is one of the few players who doesn't have a substitute because there is nobody around who plays like him,” insisted Marcello Lippi, Italy's World Cup winning manager.

“There are no alternatives for Totti.”

Another thing that makes his legacy all the more special is his unwavering loyalty to his beloved team. Although the likes of Real Madrid and Manchester United tried their darndest to lure him away, he remained steadfast and devoted to Roma. Something that's been utterly refreshing to see considering the influx of money in today's game.

Aside from his magical on field significance, Totti's persistent work with the homeless and the elderly has further endeared him to the people of Rome. “He's not only an immense player, but a wonderful human being,” noted former coach, Rudi Garcia.

“And he's also humble like all great players. Before arriving here I knew the player and the superstar – everyone in football knows the captain. But Totti is a great person too.”

Now 39, and well and truly in the twilight of his career, Totti's contribution is still amazingly being felt, both on and off the field. His technical quality and understanding of the game are still at such a high level that even though his fitness isn't quite what it used to be, he can still be a real game changer off the bench – which is precisely what he's done in the closing months of this season.

For the man who's captained the club for almost 20 years and who's so wildly adored by the fans, he can unequivocally look back and be immensely proud of his achievements.

Surely not even he could've imagined in his wildest dreams what a legendary career he'd go on to have when he first signed for the club a whopping 26 years ago.