It was a disease that plagued England for decades, many thought it had slowly died out but the after the events at Euro 2016 football hooliganism is very much back in the public eye. The tournament is less than a week old and it's already chaos. The spectacle that UEFA wanted to put on has been marred by violence, arrests, injuries and deaths.

The events In Marseille in the lead up and following on from the England vs Russia match made for unsavoury viewing. The images of England fans jumping over the stairwells in the Stade Velodrome to escape the charging Russian fans lead to many fans coming to a startling and chilling realisation; football hooliganism is still rife. The British have just been sheltered from it.

For many it's a stark reminder of how times used to be. The English Disease (as it was known back then) was deep rooted into the depths of the football way of  life. Going to the match in the 1970's for many meant accepting you could potentially be walking into a fight. It was indistinguishable; football and fighting, fighting and football. It wasn't the matchday experience fans of the modern game are used to.

It was a ritual for these fans. It was archaic. It was brutal. It was sadly a way of life.

Fans in England became familiar with this before the government crackdown in the 1990's in the attempt to bring it under control before it was too late to rescue. Now such scenes are a thing of the past in Britain. They're nothing but stories for the most part. However, the same can't be said for in Europe.

Firms are just effectively the football equivalent of the Mafia. Many different families vying for the top spot. Individuals align themselves with these firms if they share the same beliefs. It gives the individual a purpose, an identity and a feeling of belonging. They're fighting for something they believe in and using football as a rouse, almost as a way to justify it.

They attempt to masquerade their cult like club by saying their issues are political or racial. More often than not It was linked to crime. They were fighting for control of territory. It's primitive. We may lose the football but we're superior when it comes to fighting.

Britain in the 1970's was a far cry away from Britain 2016. It was a time of change and there was resistance from some. Racial tension, political unrest and lack of jobs was a recipe for disaster. It was literally life and death in the eyes of these people, and they went about their business accordingly. The reputation of these hooligans stretched worldwide and clubs tried to replicate that lifestyle.

Possibly the most publicised event linked to hooliganism related to a British club is the Heysel disaster. Rioting by Liverpool fans resulted in 39 Juventus fans losing their lives after a part of the stadium collapsed. The tragedy resulted in UEFA coming down hard on English clubs – Liverpool being banned from European Competitions for 6 years and English clubs being banned from Europe for 5 years.

These events are a thing of the past now in England with nothing coming to close to what happened in the 1980's.  The country has moved on. The government did its best to weed out the instigators. The fans attending games have developed. It's a thing of the past. The reputation of English clubs was gradually rebuilt.

Unfortunately other European countries didn't follow suit in such a manner.

Russian hooligans are perhaps the most notorious in world football and very little has changed for them in forty years. They still attend to games with the sole purpose of fighting. The match itself is just an excuse to fight. Five days into Euro 2016 and 50 Russian fans have been deported for coordinated attacks on other fans. 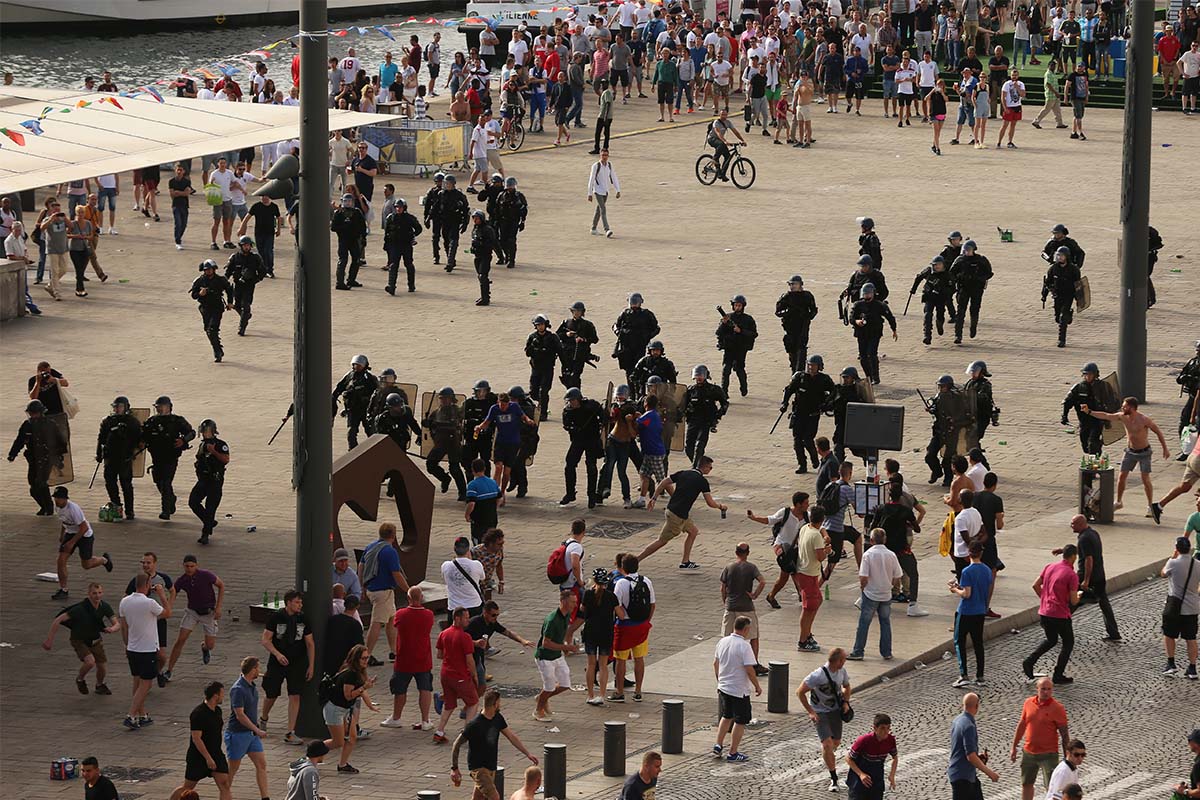 The host nation France still has trouble with hooligans. At most Ligue 1 matches away fans aren't allowed into the stadium. The police and the government couldn't handle what was going on yet instead of facing it head on they decided to just ignore the issue. There is still crowd trouble there and it's not uncommon to see LIgue 1 matches being played behind closed doors. In 2006 a PSG fan was shot and killed by a police officer after violence following a PSG match against Hapoel Tel Aviv. PSG fans were heard shouting racist and anti-semetic chants at Israeli fans. Officers tried to intervene, the aftermath saw the PSG fan sadly lose his life.

Famed for their progressive ways it may surprise people to hear that Germany still have trouble with hooligans. In 2007 German matches from the fifth division and lower were cancelled after nearly 1000 fans attacked approximately 300 police officers after a match between Lokomotive Leipzig and Erzgebirge Auell.

Then during the 2010 World Cup German fans burnt an English flag and were recorded signing racial chants following on from the match between the two countries.

Italian clubs still have to answer the club ultras. These hooligans still have an influence in how clubs go about their business. Lazio ultras have links to neo-nazis. City rivals AS Roma fought with Liverpool fans in 2001 which resulted in five fans being stabbed. Racism is still prevalent in some stadiums in Italy.

Spanish clubs still haven't got a handle on racism. There are still monkey chants and bananas directed at coloured players in La Liga from time to time. As recently as 2014 a hooligan firm affiliated with Barcelona stabbed two PSG fans following on from a Champions League match. 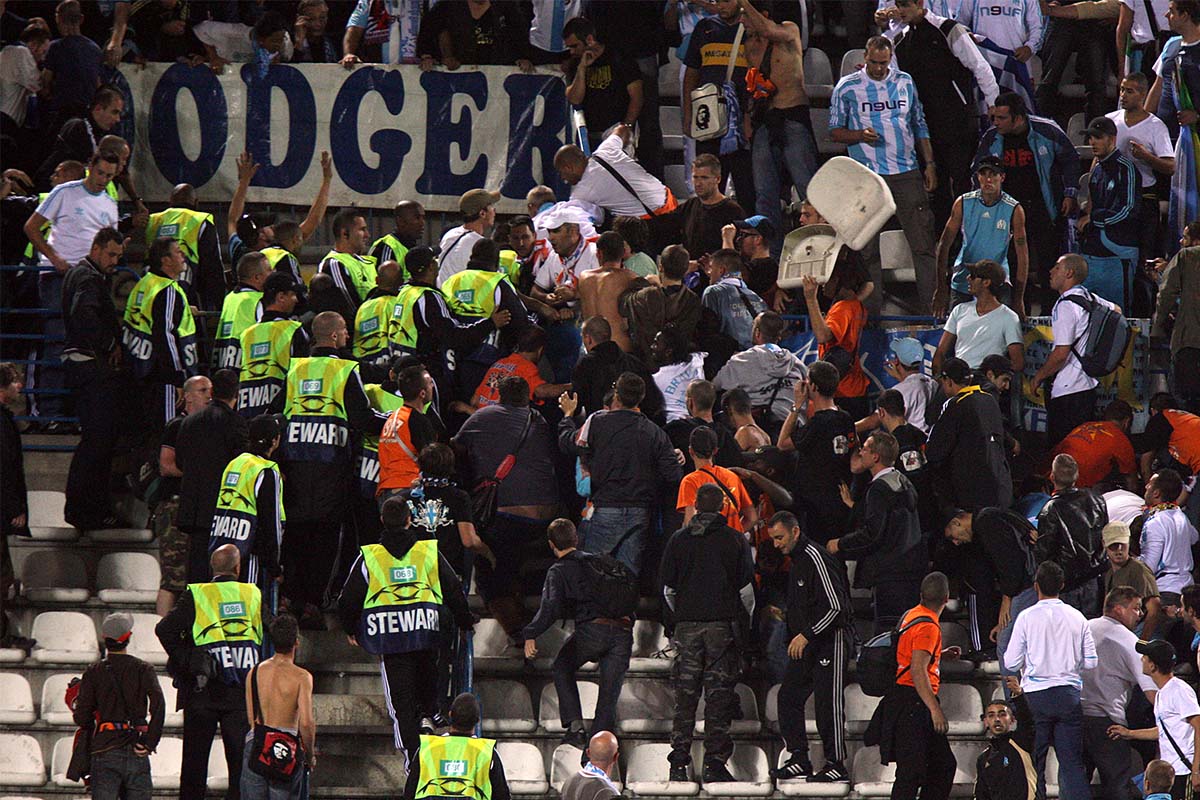 Turkish hooligans are still prevalent in modern football. In 2013 a Fenerbahce fan was cornered and attacked after a match against Galatasaray and later died in hospital. In 2015 Besiktas fans travelled to England to follow their team against Liverpool in the Europa League. Scuffles lead to an increased police presence in the town centre and around the stadium to combat any potential threats.

Hooliganism is still very much a football disease and there has yet to be a shot to eradicate it effectively or efficiently. There's no quick and easy fix but with UEFA and FIFA wanting to branch out into different parts of the world it's about time countries finally opened their closets and waded through their problems to ensure the safety of the fans travelling there. When people say football is life or death it's supposed to be figuratively, not literally.