Forget Sergio Aguero’s last minute strike, the greatest finish to a title race in the history of English football occurred on May 26th 1989 when Liverpool played Arsenal in the final game of the season.

Alright, a team scoring two goals in injury time on the final game of the season is dramatic, of course it is; but the fact is, teams have won the league on the last day of the season plenty of times before. Manchester City pipped neighbours United to the title in 1968. Aston Villa snatched it from Ipswich in 1981 and Manchester United came from a goal down to beat Spurs and complete the first leg of the treble in 1999 on the final day.

The difference with the 1989 season was that the two teams who were competing for the League Championship, as it was known then, were playing each other, on the very last game, on a Friday night, in a winner takes all encounter and it didn’t fail to live up to the expectation.

Yes, it wasn’t on Sky (but it was on ITV at 8pm on a Friday night) and yes, it was before football was re-born following the creation of the Premier League, but if anything the circumstances surrounding the match made it even more incredible than anything that has followed and to really understand the size of the occasion you need to look back at what had happened in the months leading up to that most historic of nights.

At Christmas it was Arsenal who looked to be the favourites to win their first title for 18 years as they battled at the top of the Barclays League Division One table with unfancied Norwich City, whereas Liverpool were back in 6th place and a full six points off their North London rivals.

By January Arsenal had stretched their lead over Liverpool to nine points after something of a collapse from Liverpool; including a thrilling New Year’s Day game against Manchester United which saw them defeated 3-1 and by the spring Arsenal all but had the title in their grasp, with a comfortable lead over their nearest challengers Norwich and Liverpool seemingly out of it, some 14 points off the pace.

As Easter approached though it was Arsenal’s turn to wobble, and just about the same time as Liverpool found their form. After that defeat at Old Trafford on New Year’s Day, the Reds won 15 of their next 18 league games to gradually chip away at Arsenal’s lead. On Grand National day in early April, Liverpool thrashed Sheffield Wednesday 5-1 to finally reach the top of the table and everybody outside Highbury assumed there was only one team that would win it from here-on-in.

The Gunners did return to the summit briefly, after beating Newcastle, but Liverpool would replace them if they were to win their game in hand. First, though, they had to play in the FA Cup semi final against Nottingham Forest.

The fact that the two title contenders faced each other on the final game of the season wasn’t something dreamt-up by TV executives or a convenient glitch in the fixture list computer however, it came about due to the worst sporting tragedy ever to take place in this country when Liverpool faced Nottingham Forest in that FA Cup semi-final at Hillsborough on April 15th. 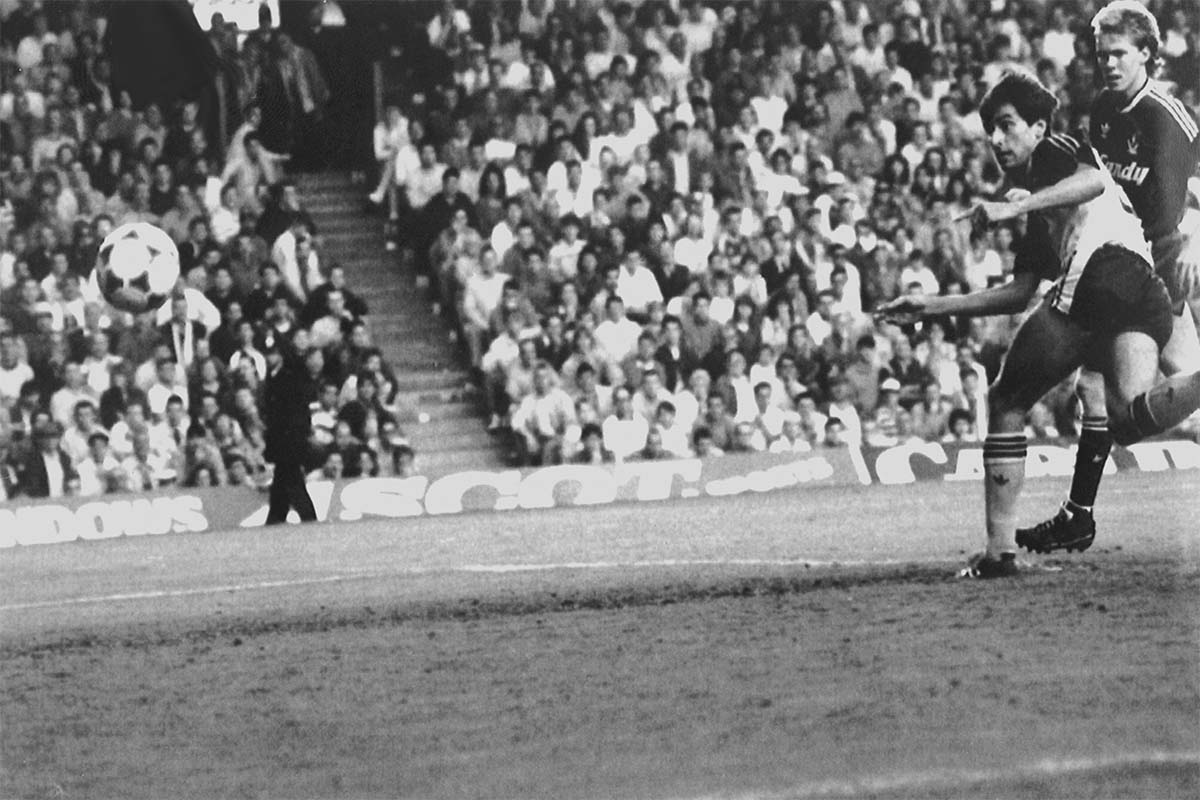 96 Liverpool fans would tragically die as a result of a crush at the Leppings Lane end of the ground in Sheffield that day. Liverpool’s next two league games were postponed as the club, its supporters, the nation and the football world mourned. It would be another fortnight before Liverpool were to play again, and the Football League faced something of a headache when it came to the backlog of games that the club was faced with.

Between their first game back following the disaster on May 3rd, when they drew with Everton in an emotional game at Goodison Park, and the eventual showdown with Arsenal, Liverpool played and won six times; Arsenal, on the other hand, only had to play three times during that period, and somehow managed to drop five points at home as they lost to Derby and drew with Wimbledon.

If most outside of Highbury believed Arsenal had now blown their chance, what was to happen in Liverpool’s penultimate game would have tested the optimism of even the most ardent supporters when they entertained West Ham on the Tuesday night, knowing that victory would leave them needing just a point when they faced the Gunners three days later to secure a historic second double.

Hoping the already relegated Hammers might help them out, Arsenal could only fear the worst when Liverpool ran riot and scored five. Not only did the thumping relegate West Ham it also meant that if the title was to go to London, Arsenal would have to beat Liverpool by two clear goals in the final game.

So as it worked out, a game that was originally scheduled for late April would now be the final act in this most enthralling season some four weeks later with Liverpool facing Arsenal in the last game of the season in a match that would, one-way-or-another, settle the most incredible of title races. Such was the scale of the occasion and due to the unprecedented circumstances the game was switched to a Friday night a full two weeks after the FA Cup Final.

Nobody gave Arsenal a chance, understandably, due to the fact that they hadn’t won at Anfield in 14 years and it had been three years since Liverpool had been beaten at home by two clear goals. Prior to kick-off the Arsenal players had run to the Kop and handed bouquets of flowers to supporters as well as a cheque for £30,000 to the Hillsborough Disaster Fund; but the niceties were to end there as 45,000 spectators and a TV audience of over 20 million settled back to watch what everyone assumed would be the coronation of Liverpool as First Division champions.

In the build up to the match, Arsenal had been incredibly relaxed, probably due to the fact that nobody gave them a prayer of achieving the two-goal win they required; but Arsenal manager George Graham remained convinced his team could still do it. “George came in and said: ‘Listen boys, I really fancy our chances,” explained Arsenal midfielder Michael Thomas some years later. “I’ve thought about it and David O’Leary will play as a sweeper.’ Everybody was looking at each other, thinking ‘is he mad?’ ”

But the plan worked as Arsenal suffocated Liverpool in the first half and played on the break in the second. They scored through Alan Smith on 52 minutes and it was game-on. Arsenal were hungry for the second goal they so desperately needed and nearly got it through Michael Thomas while Liverpool hardly sat back, going close with chances from John Barnes and Ray Houghton.

When Arsenal’s Kevin Richardson went down with cramp for the second time in the final seconds of the game it appeared the match was fizzling out to the inevitable conclusion that most people had expected. The camera cut to Steve McMahon and John Barnes shaking hands in the centre circle as the director kept a clock visible in the corner of the screen for all to see as it ticked past the 90-minute-mark, something that was yet to be fully embraced by TV companies for a couple of years. 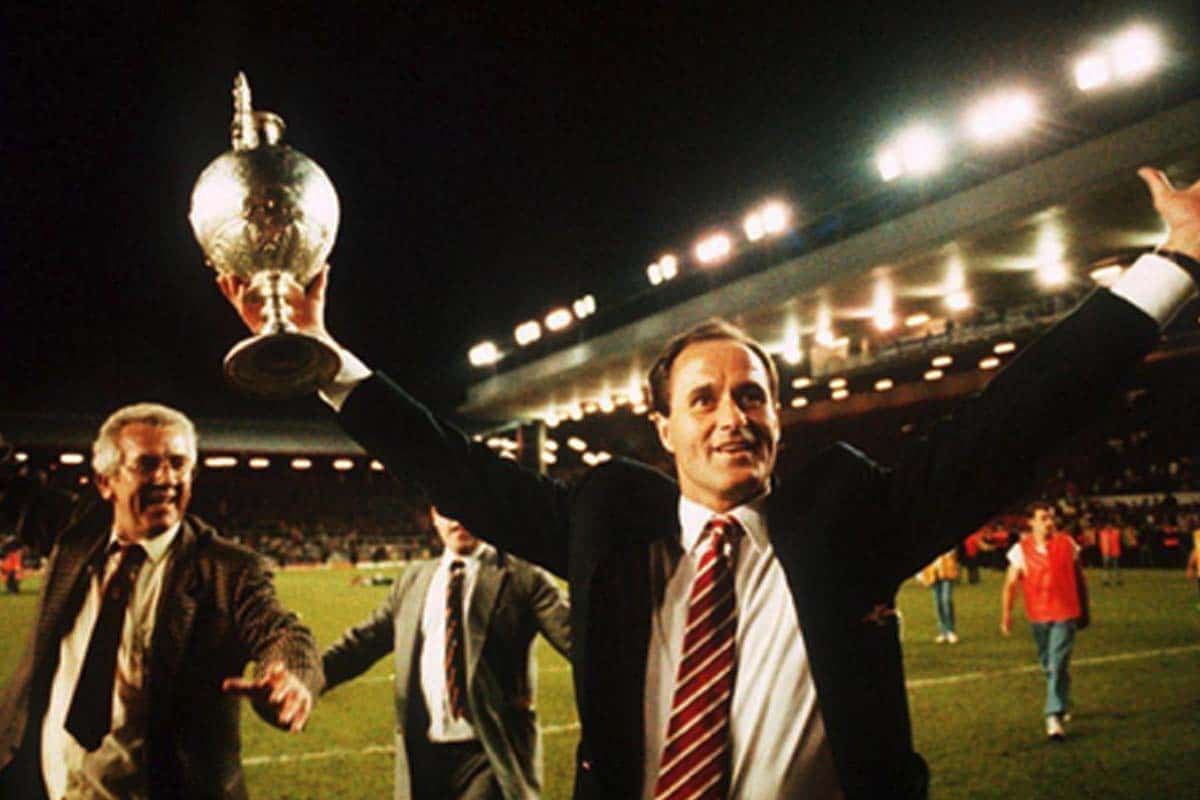 So when John Barnes won the ball deep into the Arsenal half and headed for the corner, everybody assumed he would attempt to run down the clock, however, inexplicably he turned towards goal in one last attempt to settle the game once and for all but was easily dispossessed by Richardson, who had been stricken moments earlier, and the ball deflected back to keeper John Lukic. “What I did cost Liverpool the Championship,” Barnes later claimed.

Incredibly, rather than punting the ball deep down field, as most would have expected, Lukic bowled the ball over-arm out to full-back Lee Dixon, who sent the ball further forward towards Alan Smith; “Arsenal come streaming forward now, in surely what will be their last attack,” growled commentator Brian Moore. “A good ball by Dixon, finding Smith… ”

Controlling the ball just inside the Liverpool half Smith turned and spotted the forward surge of Michael Thomas. Something that Moore also picked up on…“For Thomas, charging through the midfield! Thomas…”

Attempting to flick the ball the ball past Steve Nicol, the ball rebounded straight into the midfielder’s path, leaving him through on Grobbelaar’s goal… “It’s up for grabs now!” shouted Moore… Still with plenty to do, Thomas seemed to take an eternity before tapping the ball into the far corner of the net just as several Liverpool defenders threw themselves at him in a desperate attempt to try and block his shot. Half a second later and it would have been too late.

Liverpool players sank to their knees in disbelief while Thomas attempted the most awkward looking of headstands as 4,000 Arsenal fans, who had travelled to Anfield in hope rather than expectation, went mad, even the optimistic George Graham tried to keep the Arsenal bench from running onto the pitch.

“An unbelievable climax,” Moore bellowed. “The Liverpool players are down, absolutely abject. Aldridge is down, Barnes is down; Dalglish just stands there, Nicol’s on his knees, McMahon’s on his knees.”

There was still time for Liverpool to mount one last assault on Arsenal’s goal but now Thomas found himself with the ball at his feet in his own box, he calmly brought it under control and passed it back to keeper Lukic, who wasn’t so keen to get the ball forward this time.

On the final whistle the Arsenal players rushed to their supporters in the far corner, while George Graham and Kenny Dalglish exchanged the most sporting of handshakes and the Kop gamefully and sportingly applauded both sides’ efforts.

In his spine tingling commentary at the time Brian Moore described it as the most dramatic climax in the history of the Football League, and he was right. Championships may have been won in injury time since, but not directly between two opposing teams who have subsequently experienced the joy of victory and pain of defeat right there on the same pitch, at two ends of one stadium in front of an audience of millions – and that is why Liverpool versus Arsenal on May 27th 1989 is still the greatest finish to a title race ever.