In 1996 newly promoted Middlesbrough had money to burn and manager Bryan Robson was in the mood to spend, spend, spend. So when the likes of Juninho, Emerson and Fabrizio Ravanelli all rocked-up on Teesside the Premier League was about to change forever.

This was an era when Alex Ferguson was about to prove his kids were alright, while Liverpool were to show that fashion and football don’t always mix. The Spice Girls and Britpop ruled the charts while New Labour were on the brink of ending 18 years of Conservative domination in one of the more colourful periods in recent British history.

But in this vast landscape of rock ‘n’ roll an oasis of ordinary still existed in the North East in the form of Middlesbrough Football Club.

Boro weren’t known for being the flamboyant team that attracted huge crowds to worship at the chapel of football every weekend like their relatively near neighbours in Newcastle liked to boast. They were more of your workmanlike outfit that mirrored their industrial surroundings.

Their last foray into the top flight had been via the old play-off system back in 1988 which saw them finally promoted after running the gauntlet of a last day of the season clash at Stamford Bridge – a game that was more memorable for crowd violence than the actual result.

But they had only lasted one season in the old First Division, before going straight back down the following year, signalling something of a mass-exodus among the very players who had assisted in their rise to the top – most noticeably Gary Pallister to Manchester United for a then record fee of £2.3million.

Despite the gloom, however, one man had a vision for his beloved club which he was determined to see become a reality.

Steve Gibson was a local businessman and lifelong fan who would be paramount in the transformation which would eventually take place at the club.

A key player in orchestrating the survival of Boro in the mid-1980s, Gibson had brought together a consortium after Boro’s old Ayresome Park ground had been padlocked due to them not being able to find the £350,000 capital required for Football League registration.

With minutes to spare Gibson and friends managed to complete their registration with the Football League for the following season while also changing the club crest and the official company name to Middlesbrough Football and Athletic Club along the way. 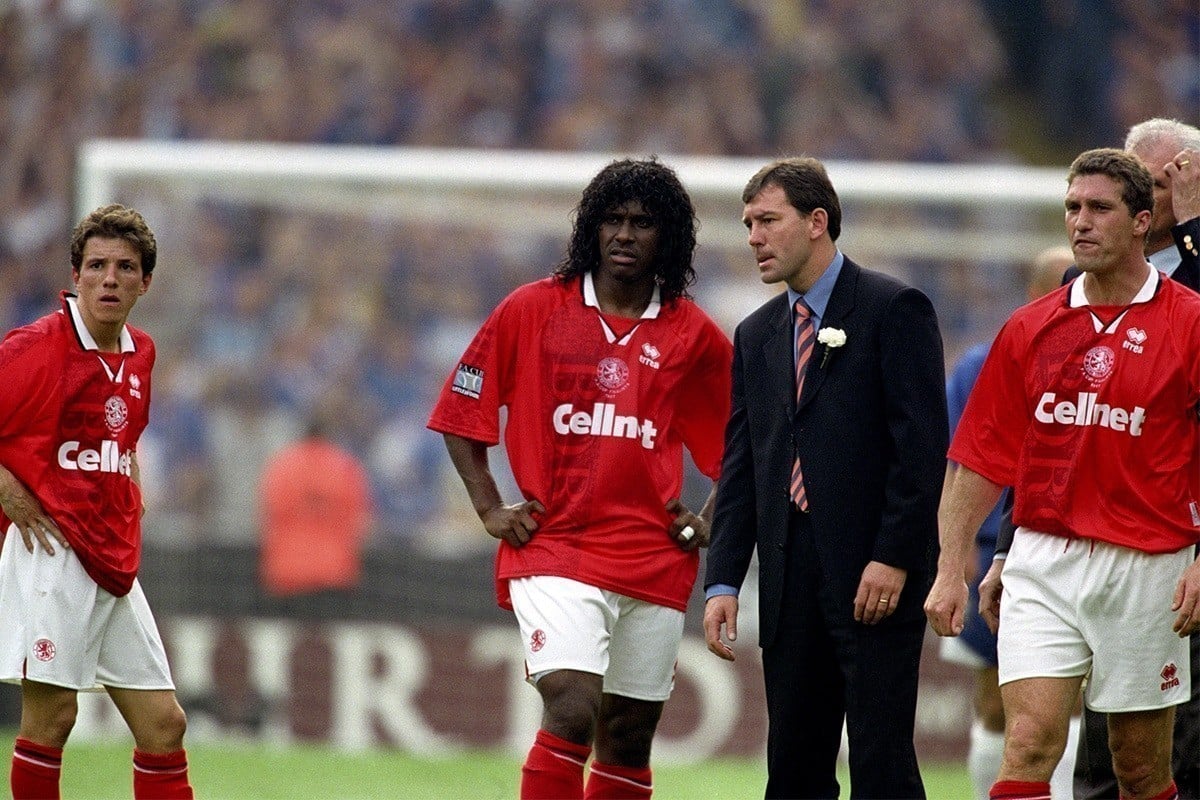 He would eventually buy-out Scottish & Newcastle's shares in the club in 1993 and succeeded Colin Henderson as the club's chairman in 1994.

It was a deal which would lead to him owning around 90% of the club while also overseeing the construction of a brand new 30,000 capacity ground in the process – the biggest stadium built in this country for 70 years at the time.

So when Middlesbrough were eventually promoted back to the Premier League in 1995 under the guidance of ambitious new manager Bryan Robson, they were about to undergo a make-over even Richard and Judy would have been proud of.

After a steady first season back in the big-time a 12th place finish meant that the club were in a good position to kick-on to the “next level,” with Gibson more than happy to dig deep and put his money where his mouth was.

And rather than just seeking out the usual collection of journeymen and bit-part-players that are usually snapped-up when a club has a few bob to spend and want to show that they mean business – they were to target some the best on the market in a shopping spree to end all shopping sprees.

Juninho was paraded at the recently constructed Riverside Stadium after signing from Sao Paulo for £4.75million in a huge statement of intent by the club. He was still young, hungry and his in his prime. He was keen to win things and show the world what he could do – and at Middlesbrough of all clubs.

Then came Emerson, the shaggy unkempt looking yet incredibly skilful Brazilian followed by probably the biggest when Champions League winner and Italian international Fabrizio Ravanelli was signed from Juventus for £7million.

The “White Feather” was a pure goal scorer, intelligent in his movement and lethal when given a chance to shoot. He had two good feet and came complete with all the tricks he had leant from playing with the world’s best up his sleeve.

There were others too. Danish international Mikkel Beck came from Fortuna Köln, while Branco, capped 72 times by Brazil, also arrived to join what was to be known as the “United Nations” of football.

But what was refreshing about this “Foreign Legion,” was that they played every game as if it was their last. They were a team for the here and now were the epitome of the old footballing cliché of taking one match at a time. Something of a rarity in the current era of unhealthy fascination with Champions League qualification places and staying in the Premier League purely for a bumper pay-day when the next international TV rights deal is shared out.

They were afraid of nobody, could mix it with the best and perhaps this is why they ended up playing at Wembley twice in one season, making the final of both the FA Cup and League Cup in 1997 – a season that was to sum up that side’s swashbuckling mantra in nine rollercoaster months.

Robson’s Middlesbrough, who began their 1996-97 campaign on a beautiful late summer’s day against the “Spice Boys” of Liverpool in a game that would be remembered for a stunning hat-trick from Fabrizio Ravanelli in a thrilling 3-3 draw, scored an impressive 51 goals that season.

Ravanelli banged-in 16 while Juninho bamboozled defenders with his sharp turns, close control and set-pieces. He also chipped in with 12 goals, proving he was still one of the most naturally gifted players in the league and making Middlesbrough just as much the entertainers as those who played further up the A1 in black and white stripes.

But after failing to fulfil a fixture against Blackburn at Christmas following a bout of illness ravaged the club, Boro were deducted three points – a punishment they never really recovered from – which was compounded by their relegation that spring as those extra three points would ultimately be the difference between Middlesbrough staying up and going down. 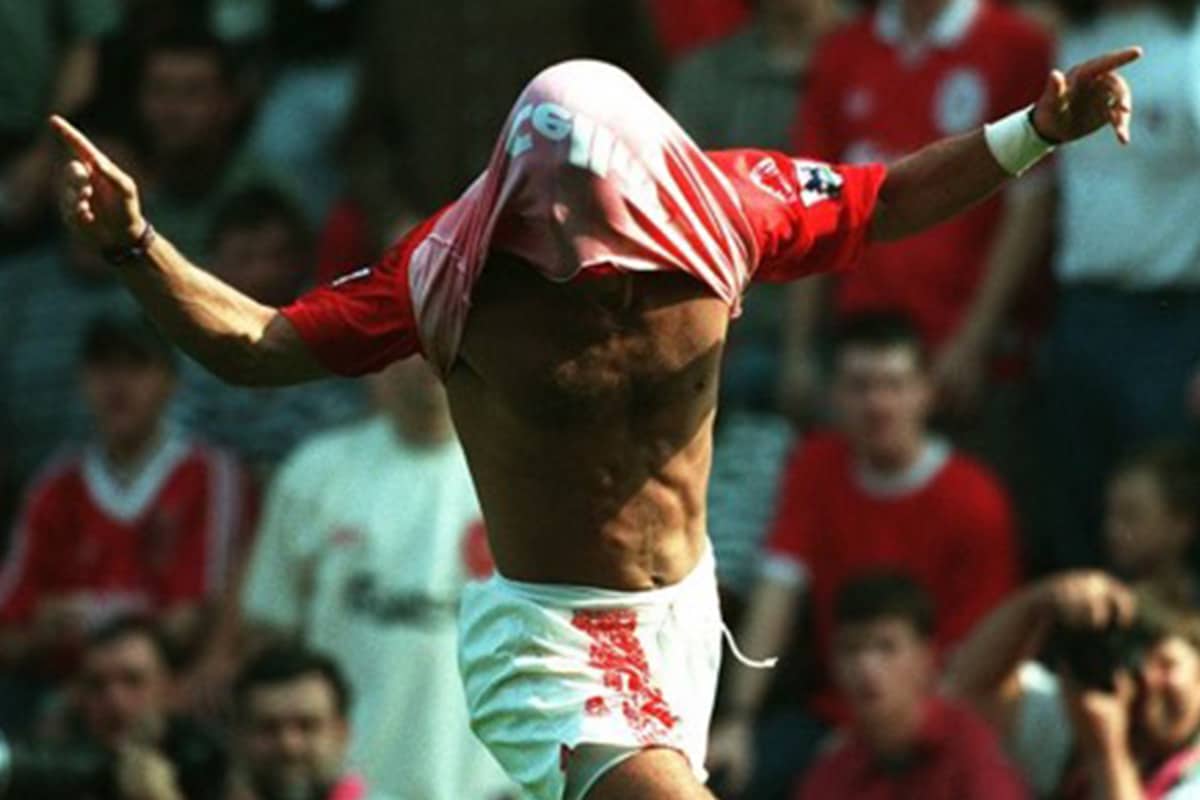 For those on the outside though, it wasn’t necessarily the on-pitch activities that this Middlesbrough side would be remembered for, or even the glamour of two cup final appearances. It was more the way that they offered genuine belief to teams who would have previously seen themselves as outsiders or unfashionable and gave them the confidence to say: “it could be US one day.”

They signified a watershed moment. A team that took the old-school values of the national game and introduced unique foreign influences that would ultimately elevate the Premier League to the multi-billion bound business it has become today.

They would lead the way for the first wave of mass migration of international stars to the Premier League and opened the door for the likes of Denis Bergkamp, Paolo Di Canio, David Ginola and Thiery Henry to name just a few.

Okay. Maybe the foreign invasion would have still happened anyway, but thanks to the club’s pioneering spirit under Bryan Robson and Steve Gibson everyone suddenly felt like there was a big, wide, world out there during a time when the only overseas football to be found on TV was Chanel 4’s Gazzetta Football Italia on a Sunday afternoon – and everyone wanted a piece of the action.

But with their relegation the circle had well-and-truly been completed and Middlesbrough’s demise, if nothing else, showed exactly how fragile the dream had been. There was no plan B, no consideration for the future – put simply, they were not built to last.

We can only wonder what would have happened if they had managed to scrape a team together that day and play Blackburn? Would there have been more big names to follow? How far could the club have gone if they had fulfilled their commitment to fielding 11 players that week?

As it turned out it wasn’t to be all bad news for Boro, who won promotion back to the Premier League at the first attempt and would also lift their first major trophy some years later when they won the League Cup.

But the legacy of this “Foreign Legion” was probably more beneficial to the game as a whole if the truth be told rather than the good of the club.

Of course today we think nothing when a club the size of Middlesbrough sign a household name or seasoned international and for that we can probably thank Middlesbrough’s pioneering spirit of the mid-90s.

Whether that benefits the club or even the game long-term is up for debate. But let’s be honest, when it happens to OUR club, who really cares?