In the nascent years of the Premier League, English football's top flight was enriched and transformed by the arrival of a handful of the world's finest creative attackers.

From Eric Cantona to Gianfranco Zola, Dennis Bergkamp to Juninho, the influx of technically gifted No.10s – deployed “in the hole”, as the parlance of the time termed it – provided a framework for an archetype rare in the 4-4-2-obsessed world of English football.

Neither out-and-out striker nor midfielder, these players opened up new attacking avenues with their mastery of the space between the opposition's lines of midfield and defence, the vision to spot chance-creating passes and the technique to execute them.

Although most were reliable scorers in their own right, their remit was one concerned more with imagination and skill; they were the lock pickers, through whom attacking moves were funnelled and thus refined.

Football has changed a lot since those days, though. And, as such, the role of the No.10 has evolved. In recent years, the increasing prevalence of the high press within the tactical methods of most elite clubs has seen the demands on the central attacking midfielder or deep-lying forward change.

It is more common now, for instance, to see a conventional No.10 repurposed as a wide player, with the likes of Juan Mata, Henrikh Mkhitaryan and Mesut Özil regularly fielded on the flanks.

In the centre now, more athleticism is required than the traditional, socks-round-the-ankles maverick playmaker offers. The need to relentlessly press opposition defenders when they have the ball demands speed and stamina, while the player “in the hole” these days is tasked more with breaking beyond the striker in search of scoring opportunities, rather than being afforded the luxury of receiving the ball to feet and studying the picture before them.

Özil has found himself out of favour at Arsenal under new manager Unai Emery because of this. The German remains one of football's most prolific creators but lacks a goal threat and offers little without the ball. 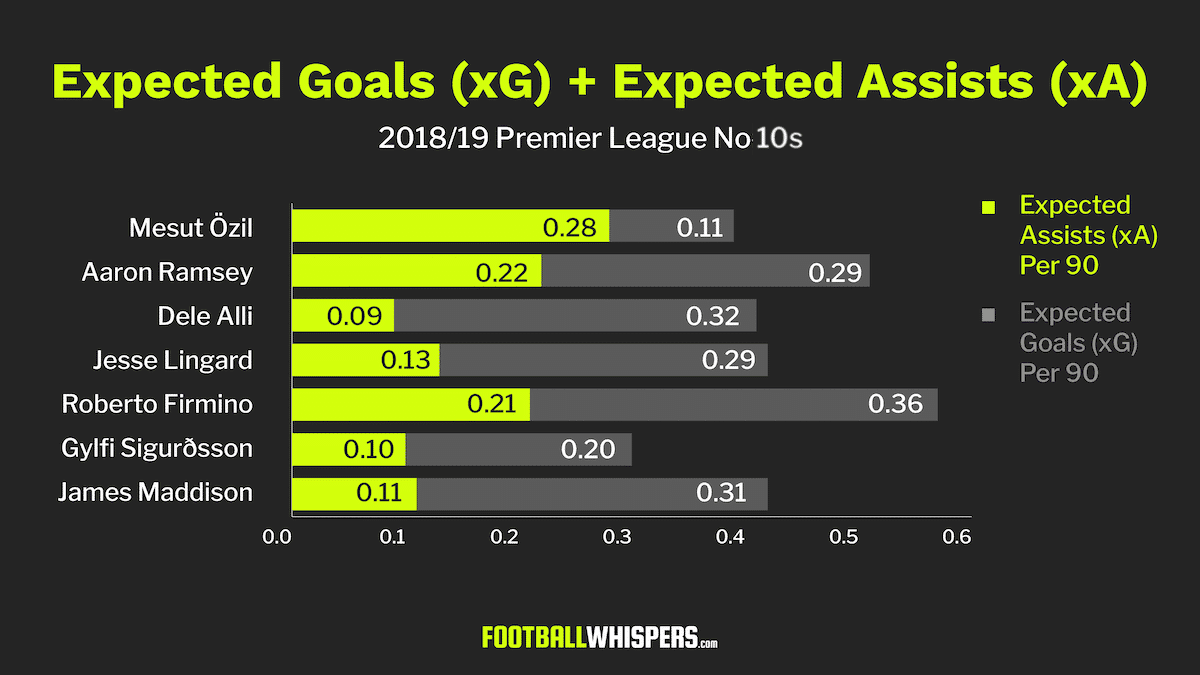 When he has played this season, he has tended to be positioned in the No.10 role, though, which offers an interesting and instructive juxtaposition when measuring his performances against the Premier League's new breed of No.10s.

When looking at every player to have received regular minutes in a central attacking position behind a striker for a team with an average of more than 50 per cent possession this season (the top six plus Everton and Leicester City) there is a striking difference between Özil and the rest  – those being Aaron Ramsey, Dele Alli, Jesse Lingard, Roberto Firmino, Gylfi Sigurðsson and James Maddison – when it comes to output.

But Özil poses the least threat to goal of all seven players, with an expected goals (xG) per 90 on just 0.11, some way short even of the next lowest, Sigurðsson, at 0.20.

With his athleticism, energy, tactical discipline and ability to time entries into the penalty area to perfection, Tottenham Hotspur‘s Alli must be considered the archetypal modern No.10. His 0.32 xG per 90 is bettered only by Firmino (0.36), whose own average is bolstered by his time spent as a centre-forward at Liverpool this term. 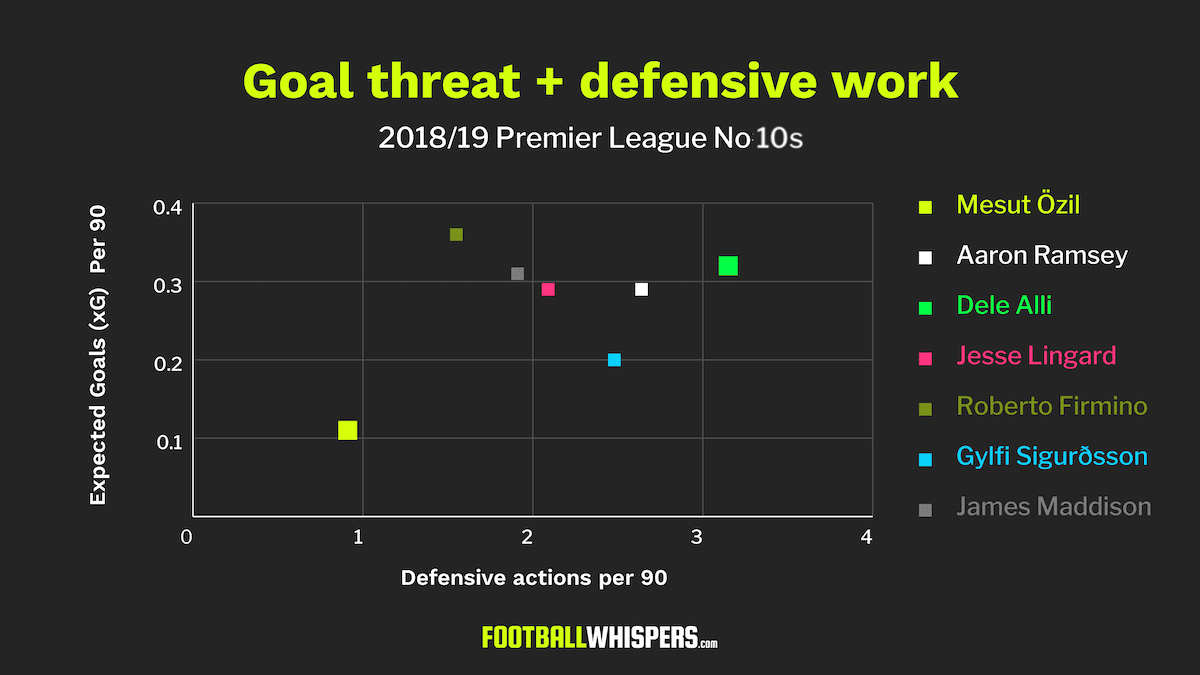 The polar opposite of Özil, Alli's creativity is measured by an xA per 90 of just 0.09, by far the lowest of the group, which demonstrates how his role with Spurs when in possession is about getting as close to Harry Kane as possible and seeking scoring opportunities, rather than conjuring chances for colleagues.

It's a similar story with Lingard, too – who has spent time wide on the right this season, as well as through the middle – whose xA average is just 0.13, yet his xG average is 0.29. Even Leicester's Maddison, viewed by many as primarily a creator and old-school-style No.10, fits the same mould, with an xA of 0.11 per 90 and an impressive xG average of 0.31.

Alli and Firmino are equal when it comes to touches inside the opposition's box per 90, with only Ramsey (5.28) able to come close to their average of 5.32. But Alli is out on his own in terms of defensive actions (combined tackles and interceptions) per 90, with 3.15; it will surprise no one that Özil is last in this category, with just 0.91.

Most trends in football are cyclical, and there will surely come a time when coaches once again make room for an enigmatic creator in a central attacking position.

But it's time to reassess how we think about the No.10 role, with Alli the modern man.