Sadio Mané’s timed his upturn in form to perfection. His overall performances this year had paled in comparison to those of last season but he’d still been chipping away in terms of goals and assists. However, he’s come to life in a period often dubbed the business end of the campaign.

The Liverpool No.19 has seven goals and two assists in his last nine appearances taking his total goal involvement for the season to 25 – nine more than he managed during the 2016/17 season – and there's still a minimum of seven matches to play before the current campaign comes to an end.

The 25-year-old speedster has undergone a transformation this season but it's gone under the radar. Since the departure of Philippe Coutinho in January, Mané has taken up more of a creative role in the Liverpool XI.

His role isn't too dissimilar to that of the one the Brazilian played for the Reds before Barcelona parted with more than £100million to bring the midfield maestro to the Nou Camp.

They're by no means like for like, but the former Southampton man, over recent weeks at least, has been taking up Coutinho-esque positions for Jürgen Klopp‘s men with Andrew Robertson hugging the touchline on the left. The understanding between the pair has been evident and it's allowed Mané to impact proceedings from a central area.

It coincides with his flurry of goals and assists. His xG Assisted per 90 number of 0.20 is the highest it's been since he moved to England, it's also the third highest at Liverpool behind only Mohamed Salah and Roberto Firmino.

The change in how Mané is viewed highlights just how quickly things can change in football. At one stage his involvement in the first team was questioned by fans who yearned for the player they witnessed week in and week out last season. Now he's considered to be one of the most important players to the Liverpool system and playing style.

He's the one pulling the strings behind Firmino and Salah. The creator in chief. The playmaker Liverpool failed to buy in January and maybe even the team's new No.10.

The evolution of Mané

Salah stole the show against Watford recently. The Egyptian steals the show in most matches he's involved in but against the Hornets he put on a finishing clinic to bag four goals. The Liverpool No.11 also grabbed an assist on the night in what was a five-star performance.

Firmino's finish was also lauded, as was Robertson's cross for the Salah's second and it's because of this that Mané's performance was taken for granted. He finished with two assists to his name but he was a creative force of nature in the middle third, as shown here. It was the sort of showing that stats don't paint a full picture of. 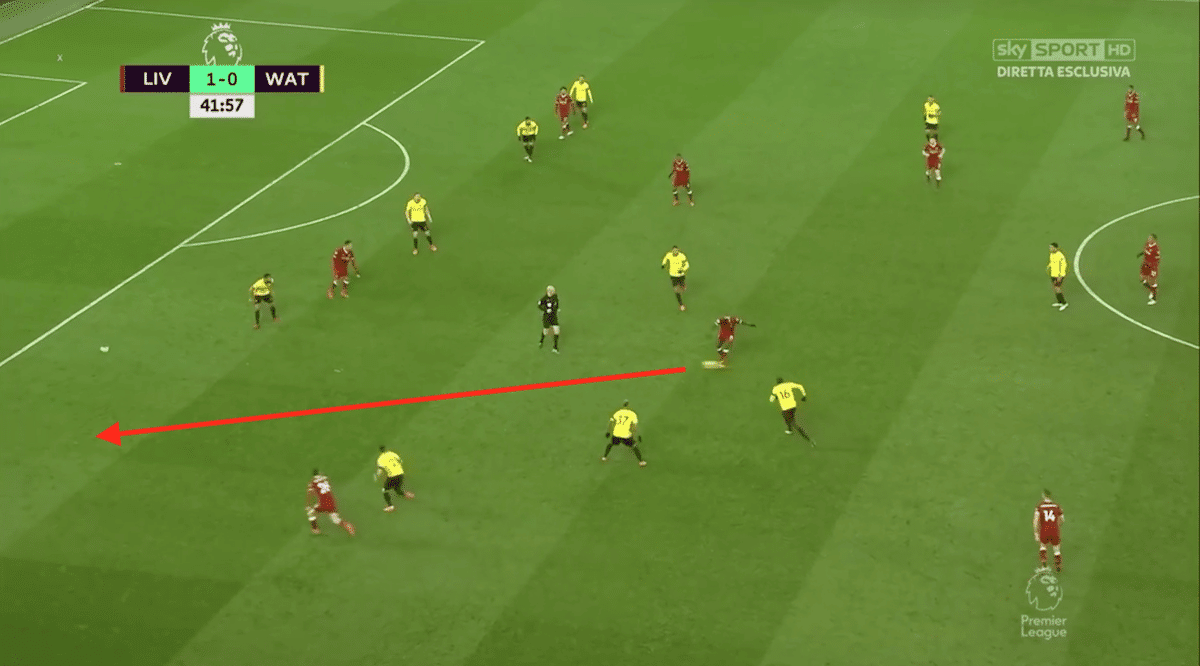 The picture above is taken prior to the aforementioned Robertson cross. As balls into the box go, the one the Scotland international played in was perfect. But it was Mané's pass to the former Hull City man which created the opportunity to begin with.

It's not by chance that the left forward found himself in such a central area. He cleverly dropped off into space to receive the pass from Robertson. With one touch he set himself before swinging his weaker left foot at the ball to get his left-back in. It was an intelligent ball because it turned Watford around.

The away side went from having plenty of men behind the ball to facing their own goal as they scramble to get into a good position. 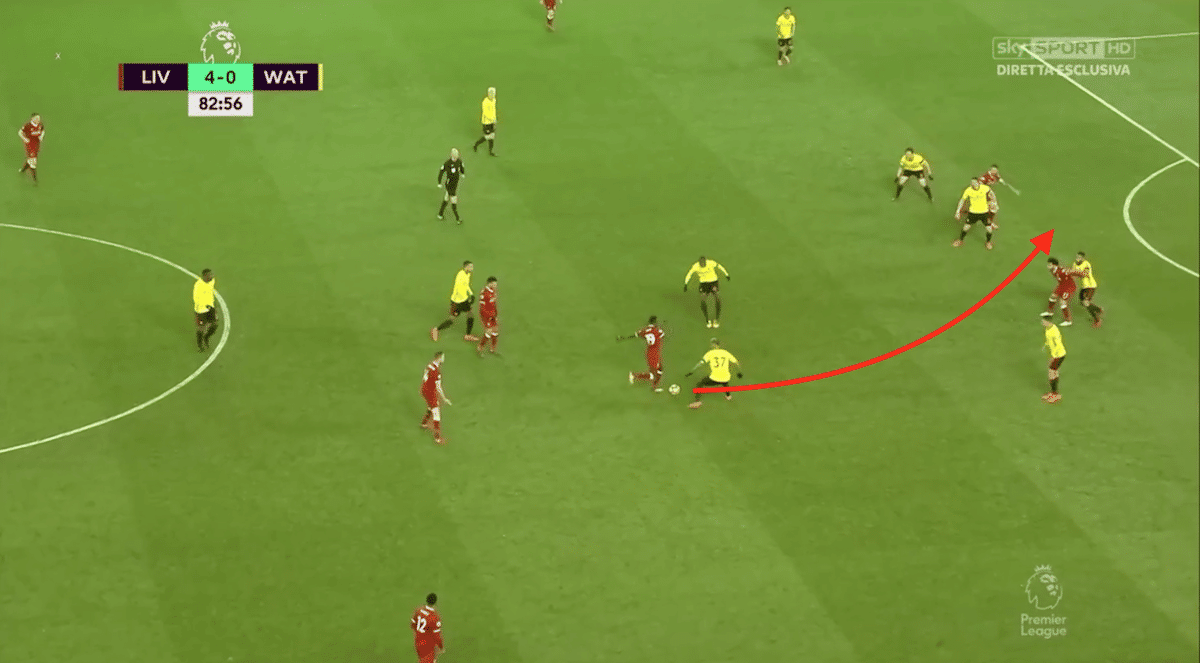 The Mané of last season would have looked to beat a few players and work an opening for himself but, for all the chaos he creates, he's now refined what he does when in possession.

He floats a pass over the top and into Danny Ings who sees his shot saved. But, again, Javi Gracia had to witness his team, with seven men behind the ball, get cut open with one pass. It was the sort of ball Coutinho was playing to Salah earlier on in the season. The sort of pass sides struggle to defend no matter how many men are in good defensive positions. 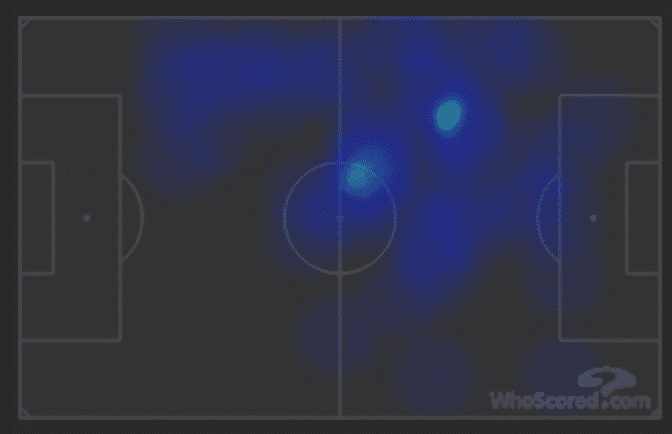 Mané's heat map against Watford, courtesy of Whoscored.com, shows he saw a lot of the ball in central areas. Liverpool's wide forwards often tuck inside but the way the ex-Red Bull Salzburg man is being deployed is noticeably different now. 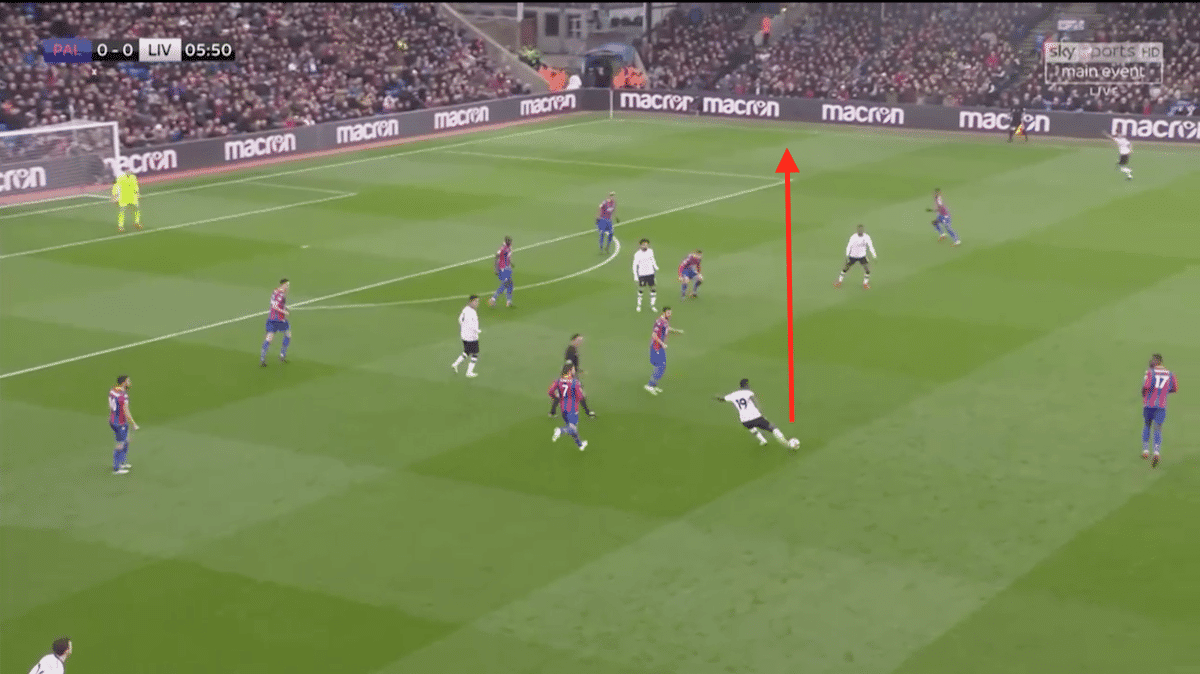 In the picture above, Taken during Liverpool's 2-1 win over Crystal Palace, Mané, again, finds himself in possession of the ball in the centre of the park. He drills a pass out wide to Trent Alexander-Arnold. He shows great vision and ability to execute it. Palace blocked everything coming from a central area for the most part but struggled to defend crosses, as they have done all season.

Against defensive teams who sit deep and look to smother play across the width of the penalty area, it's vital to get full-backs beyond the 18-yard area so that the opposition have to go wide and space is created.

The Senegal international ignores the pass to Gini Wijnaldum, the one the home side probably expected, and instead had Roy Hodgson's men racing backwards to get ready for the cross. Had Alexander-Arnold's first touch been better Liverpool might have been in. 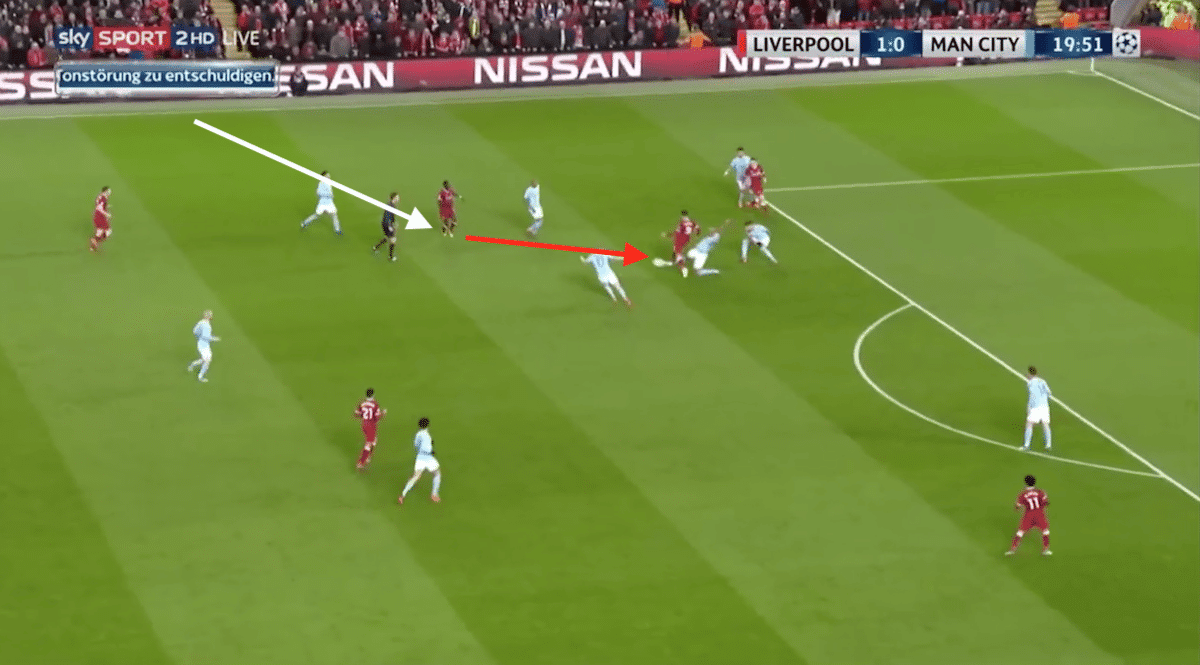 In the 3-0 Champions League win over Manchester City, Mané showcased his playmaking abilities once again. This time, however, it was in a more subtle way. He picked the ball up on the left and drifted inside. He then delays the pass for a second and allows Firmino to come even shorter.

The delay forces Vincent Kompany to follow the Brazilian and he vacates his position to track the forward. The Belgian gets a foot in and the ball ricochets back the way it came.

James Milner is first to react and the ball fortuitously finds its way to the feet of Alex Oxlade-Chamberlain. He's able to control it and get it out from under his feet before smashing past Ederson. Kompany was out of position having tracked Firmino and this allowed the former Arsenal man the extra second he needed.

This stemmed from Mané intelligently holding off on making his pass. Had he played it when most other players would Kompany wouldn't have had to go from left to right to track the Liverpool No.9 and there wouldn't have been as much space when the ball found its way to the England international.

He's not the danger man teams will fear most but he's the player capable of creating all kinds of chaos for Salah and Firmino.

Mané appears to have fully embraced the tweak to his role and Liverpool, as a team, are benefitting from having him more involved. The number ten jersey is available at Anfield, it wouldn't be a surprise to see him take it next season to complete his transformation into a No.10.