Eden Hazard’s demise in the season of 2015/16 has been as shocking as it has been rapid.

Initially, the Belgian looked to be carrying a little bit of extra summer weight, but that quickly became poor form, questionable body language and lowered work ethic. After the superlative banquet Hazard has to feast on towards the end of Chelsea’s 2014/15 title winning campaign, he has become one of the targets for the press as the Blues have collapsed like an Arsenal title challenge.

The woe of Eden Hazard will have struck a chord with Chelsea fans. The Blues have seen so many of their players hardly break out of second gear this season and, despite an improved performance against Tottenham last weekend, Hazard has been the worst culprit of them all. English football has seen many riches to rags stories, many players lose favour or be troubled for off pitch antics, but seldom have we seen a player lose the ability to play as dramatically as Eden Hazard.

One of very few players who have seen their form/ability collapse as dramatically as Eden Hazard is Fernando Torres. Torres arrived for £50 million and was, potentially, the most disappointing signing in the history of football. The Spaniard is now performing for Atletico Madrid, but his decline from the peak of his powers at Anfield to the doldrums of goal droughts at Chelsea was as remarkable as anyone could have imaged.

Hazard, along with Diego Costa and Cesc Fabregas, was integral in a title-winning side last year. The Belgian has started 29 Premier League games this season and only found the net three times. Questions will inevitably be asked of Hazard’s motivation, his fitness and whether he is eyeing up a move to one of the big boys of European football. 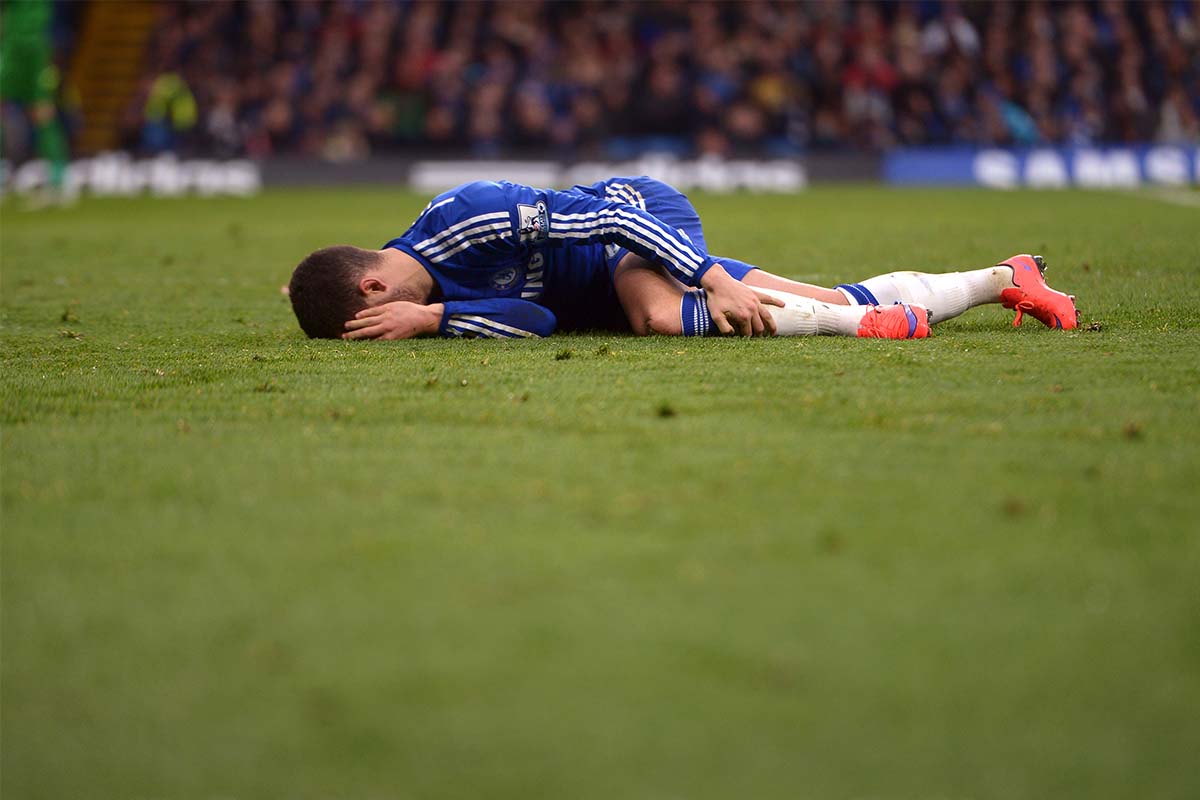 Injuries have blighted Hazard this season, as they did with Torres during his final months at Liverpool. Torres was rushed back by Liverpool on numerous occasions and this, as much as his confidence declining, was pivotal in his downfall. We are yet to see whether Eden Hazard has faced the same sort of injury mismanagement as Torres, but the signs are there that Hazard could become an injury risk for the rest of his career.

The sparkle left Torres’ game much like Michael Jordan suffered in Space Jam. Eden Hazard could well be the next Chelsea player to decline in such a heart-breaking manner. Injuries will damage the career of any player, they will lose confidence, pace and form, but there has been something more severe happen to Hazard this season. The Belgian winger is not near the same infamy of Torres yet, although the risk is there and it is staring Chelsea and Antonio Conte in the face.

However, crucial stats for Hazard may suggest that this is nothing more than a fad. His key passes per game are only marginally down on his 2.6 from the 2014/15 Premier League season, but it is his dribbling where his shortage of confidence and risk-taking has been most obvious. Hazard was completing nearly five dribbles per game during Chelsea’s title winning campaign – with that figure above seven in the Champions League – and this has now dropped to 2.6 dribbles completed in 2015/16. Even Torres didn’t suffer a statistical collapse as sheer as this.

It has been Hazard’s dribbling that was the main point of comparison with Lionel Messi. His low centre of gravity, electric feet and cockiness to wriggle out of the tightest of situations made Hazard a great keep-ball option for Chelsea last season. Whilst his key passes have continued to compete with some of the Premier League’s most creative forces, these stats represent a concerning trend for Hazard. The Belgian’s confidence has gone off a cliff and he has looked to pass where he would previously have dribbled. This could be argued as a change in tactics, yet nothing has been suggested along those lines, why would you change such a fruitful formula?

Maybe Hazard was compensating for the drop in form of Chelsea’s primary playmaker, Cesc Fabregas, although that does not explain why Chelsea would shackle the number one asset of their side. Half of the footballing world looked to explain Fernando Torres’ miraculous decline and we are beginning to see people discuss along the same lines for Hazard. A poor start to the 2016/17 campaign, whether at Chelsea or not, will quickly see question marks raised over Hazard’s future. The talk of becoming a Ballon D’or winner seems so long ago now and Hazard now must perform to prove that he can regain the sensational form of last season.

Injuries are so often the beginning of the end for players who rely on quick changes of direction and the fear for all around Chelsea is that this could be the case with Hazard. Rebuilding confidence is challenging, but it can be done, if this poor campaign is down to physical changes it will take more than a few encouraging words to remodel his entire approach. Selling Hazard this summer will not generate anywhere near the interest nor revenue that it would have done a mere 12 months ago, yet we may see influential figures at Stamford Bridge suggest that it is best to cash in whilst they can.

The demise of Fernando Torres and Radamel Falcao serves as a warning to all clubs. Hazard is not anywhere near that sort of irreparable nightmare yet, but a couple more injuries and he could end up firmly on the way to a career of ‘what could have been’.