Prolific for Beşiktaş in Turkey for the last 12 months, 26-year-old striker Cenk Tosun was attracting plenty of Premier League interest ahead of the January transfer window.

Newcastle United and Crystal Palace both reportedly identified the former Eintracht Frankfurt centre-forward as the man to lift them beyond the relegation battle, but it is Everton who seem to have secured the services of the £25million-rated hotshot.

Everton's director of football Steve Walsh was in Turkey on December 29 trying to finalise terms on the deal and reports suggest that an agreement was reached.

The Turkish hitman posted pictures of himself in London on New Year's Eve and Allardyce is hoping to hear over the next 24 hours whether or not Tosun will be signing for Everton.

With a move to the English top flight looking increasingly likely, we've taken a look at Tosun to see what he could offer Premier League clubs if a mid-season move materialises.

Who is Cenk Tosun?

Born in Germany, Tosun began his footballing journey with Eintracht Frankfurt, rising through the club's youth ranks to make his senior debut in the 2009/10 season.

He proved prolific at youth and reserve level but Tosun's chances at Frankfurt were limited to a single 15-minute cameo from the bench against Wolfsburg.

A move to the Turkish Super Lit with Gaziantepspor soon followed, notching 44 goals and 23 assists across four seasons with the Falcons, before getting his big break with a switch to Beşiktaş in the summer of 2014.

Initially, Tosun's path to regular first-team football at his new club was blocked by the presence of more experienced, higher-profile strikers, but he took the opportunity to learn at the feet of his senior team-mates.

“I learned a lot from Demba Ba and Mario Gómez – I developed and gained a lot of experience as are both top-quality strikers,” told UEFA’s website last season.

“I increased my goal haul last season and finally felt ready to break into the starting XI. The coach trusted in me and I’m repaying his faith by scoring.”

Given the chance to prove himself with a run in the team last season, Tosun scored 20 times in 33 league games. And he has kept up his good form this term with 14 goals in all competitions, including four in the Champions League to help Beşiktaş qualify for the last 16, where they will face German champions Bayern Munich.

A two-time under-21 international for Germany, Tosun decided to switch allegiances to Turkey in 2012, making his first senior appearance in 2013. He has since accumulated a total of 23 caps and scored eight goals for the Crescent Stars.

What are Tosun's main strengths?

Although he's not lightning quick, Tosun appears rapid over short distances, owing largely to his well-honed instincts and ability to anticipate the development of play.

Mobile and intelligent, the Turkish star works well across the frontline, dropping into the channels or deep into attacking midfield zones when necessary, creating space and linking with colleagues, while also constantly on the move so as to be difficult for the opposition to pick up.

With excellent close control and subtle use of faints and shifts of body position, Tosun is able to glide beyond opposing defenders and has a sharp eye for a killer pass in the final third, hence his respectable return of 0.9 key passes per 90 and four assists this season.

It is when in front of goal, however, that Tosun shows his true value. His smart and intricate movement behind the opposition's backline is a dream for creative midfielders, and he is expert at finishing the chances presented to him, returning a 21.5 percent conversion rate last term (comparable to the 22 per cent Romelu Lukaku averaged for Everton last season).

He has, though, experienced a dip slightly in terms of his finishing prowess this season, with his conversion rate falling to 19.4 per cent in all competitions.

What are Tosun's main weaknesses?

The main concern with any club weighing up a move for Tosun will be that he has been somewhat of a late bloomer, not securing a regular starting berth at a top club until he was 25.

Many suitors may be wary of forking out a significant sum for a player who has been running hot for 12 months, yet showed little sign of developing into a genuinely top-class player before that.

Theirein lies the risk with signing Tosun, but he also comes with tremendous upside as he is, to a degree, an unknown quantity, while also boasting Champions League pedigree thanks to his exploits in Europe's premier club competition with Beşiktaş this term. 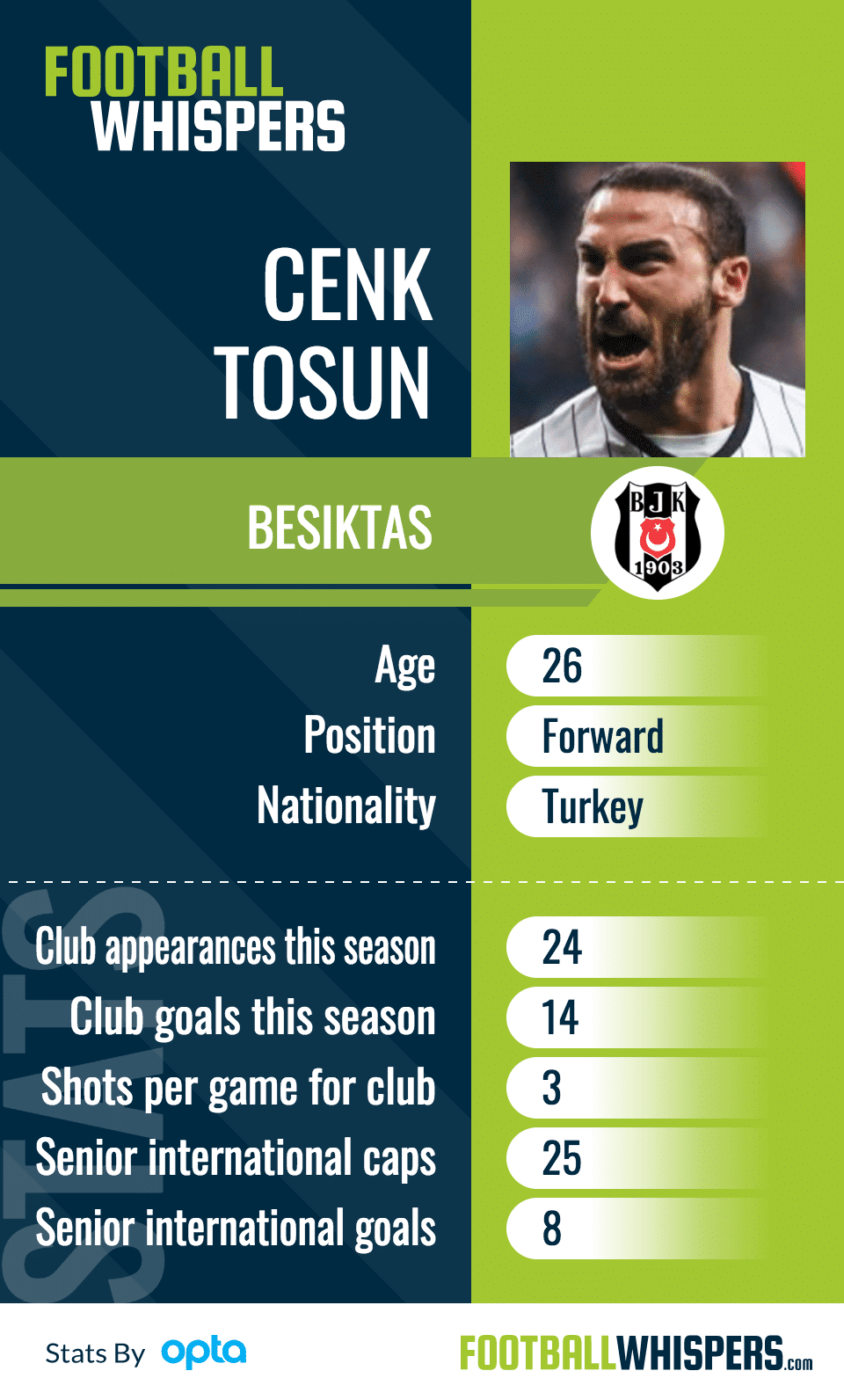 How much would Tosun Cost?

Initial reports suggest Beşiktaş are looking to recoup £25million for the prolific 26-year-old – a figure that might put off many suitors from Europe but will prove no barrier to cash-rich Premier League sides.

Everton were thought to have agreed that fee, but reports in Turkey suggest Beşiktaş have since upped their asking price to £27million.

Of course that extra £2million isn't a huge amount of money in the grand scheme of things, but if Everton had already come to an agreement to pay £25million, the principles of having to splash out more cash may see the deal fall through.

With an abundance of No.10s and a solid stable of wingers, Everton are able to offer plenty of service to their frontline, but their club-record summer investment failed to produce the kind of striker capable of dispatching such chances on a regular, reliable basis.

Tosun, with his speed over short distances, intuitive link play and deadly finishing, could be the final piece in the Toffees' puzzle, as Allardyce looks to power his new charges away from the relegation zone and towards the European qualification places.

What's more, at 26, Tosun is approaching his prime and ready to hit the ground running if he leaves Beşiktaş in the near future; he would not be an investment for the future; he is very much a man for the here and now.