“You can’t win anything with kids.” The famous words Alan Hansen will never be allowed to forget, but in France, the reality is the complete opposite.

Richer, more powerful clubs are always eyeing Ligue 1 for talent and it has become the norm for the best players to leave before they reach their prime.

Which then hands promising youngsters the minutes they need to blossom into stars quicker than in other leagues.

As plans for the summer begin to take shape, all clubs are searching for players who can make a difference in the final third.

Especially in England; with the game moving at 100mph and the rise of the high press, you need your frontline to play with efficiency, while showing a deadly eye for goal.

Away from the likes of Neymar, Radamel Falcao, Edinson Cavani and Mario Balotelli, who are all established as the best goal-scorers in Ligue 1, we’ve looked to pick out the younger forwards who are showing they can find the back of the net.

Measuring all players born in 1994 or after, we’ve looked at conversion rate, non-penalty goals and non-penalty expected goals to flag up the deadliest young strikers in France.

Whether playing in a front two or a three-man attack, the job of each forward can change team to team. Are you the target man or a winger? Are you expected to come deep, hug the touchline, or cut inside on to your stronger foot? Top of their remit, however, regardless of role, will always be scoring goals.

Who are the most clinical finishers?

To analyse the finishing power of Ligue 1’s current crop, first we have calculated how many of a player’s shots per 90 find the back of the net.

We have studied the statistics of 35 players in France’s top flight who make our cut-off date, using their goals per 90 return during the 2017/18 season – making a minimum of ten appearances this term -– to filter out the top options. 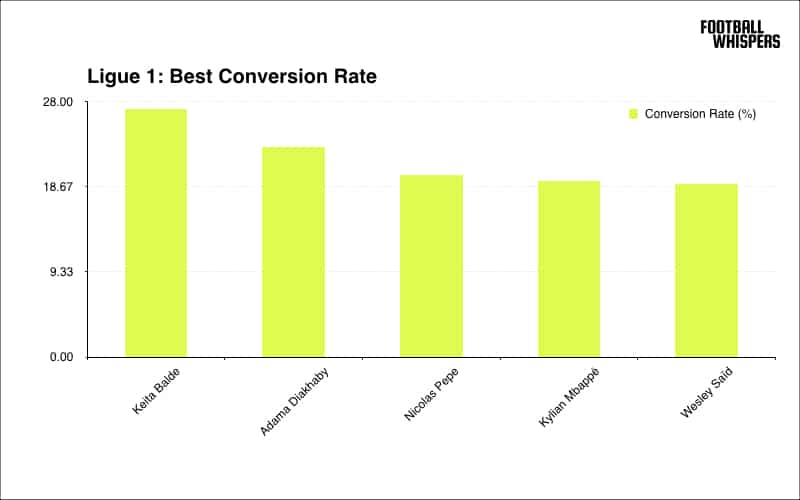 In terms of conversion rate, as you can see from the graphic above, Monaco’s summer signing Keita Baldé is leading the way – scoring eight times in the league with his shots per 90 up at 2.2, he finds the target with 27.2 per cent of his efforts, a massive four per cent higher than anyone else on this list.

His team-mate, Adama Diakhaby, who is a year younger, is second with 23 per cent. The 21-year-old may have only scored three times, but he has played half as many minutes as Keita.

Although Lille struggled, Nicolas Pépé – who has emerged as a Manchester United and Arsenal transfer target – shone.

Scoring eight goals in 22 starts, the 22-year-old finds the net with 20 per cent of his chances and is benefitting from playing out on the right wing, coming off the flank and driving towards the box.

Kylian Mbappé, who leads all the players' measured with ten league goals, dominates the statistics and is fourth in this metric. He'd be higher if he wasn't attempting 3.1 shots per 90 minutes, he's just behind Pépé on 19.3 per cent – which is still a ridiculous conversion rate from the 19-year-old.

Wesley Saïd is the first surprise to emerge from the rankings. Once heralded as the ‘next Thierry Henry’ when he broke through at Rennes, although he featured at several youth tournaments with France, it never quite happened for him in Brittany.

Signed by Dijon in 2017, he has rewarded the Burgundy side with six goals, and he averages 2.1 shots per 90 and scores with 19 per cent of his attempts. Not the first-choice forward, he has become great option beside Júlio Tavares or Kwon Chang-Hoon. Still just 22 years old, Saïd is starting to make a name for himself.

Despite his goals for Lyon last season, Memphis Depay – yes, he’s still only 24 – fell to 16th with a conversion of 12.9 per cent. The former Manchester United forward is still a huge threat, but with 3.1 shots per 90, he’s not the first player in the OL attack you try and stop.

Conversion rate serves a purpose, but it doesn’t measure the quality of the chances presented to the forwards. If you are being limited to shots from poor positions, due to the lack of quality in your side, your percentage will be down.

Judging an attacker's actual goals return against their expected goals (xG) gives us a better picture of how good their opportunities really are.

By looking at the xG of each player, we get a rough value of their attempts last season, with historical data used to place a probability score on each effort which is then added up.

If they have scored more goals than their xG score, this shows they are finishing chances at an above-average rate. The more they outperform their xG, ultimately, the more clinical they are in front of goal. 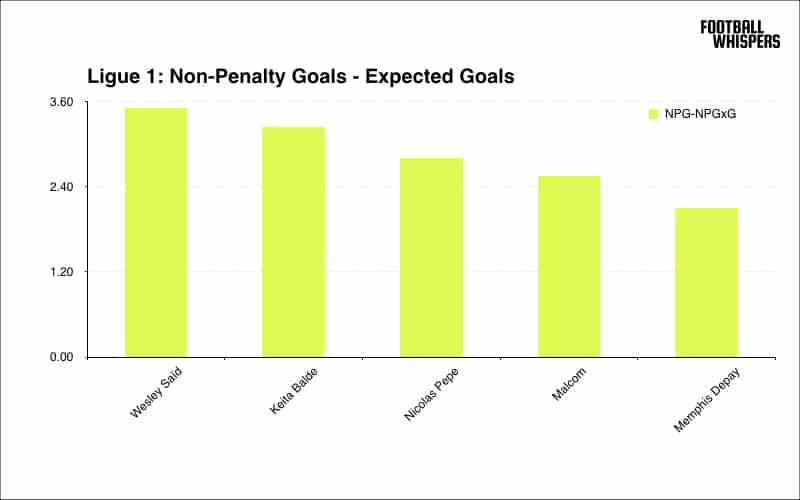 As the graphic above shows, Dijon’s Saïd has accomplished the most with the chances he has been presented, with six non-penalty goals coming from a non-penalty xG (NPxG) of just 2.48.

His double against Lille was a great example of his potential. The first was a stunning left-foot volley from inside the box, popping up on the blind side of the defence and hitting the ball perfectly into the far corner.

To make it 2-0 and fuelled with the confidence of his opener, he smashed a low effort past Mike Maignan from outside the box.

Keita Baldé is the big winner and unquestionably one of the most exciting young players in Ligue 1. The 22-year-old has a NPxG of 4.76, but has scored eight times from open play.

Lining up beside Falcao has helped and, when you team him with Rony Lopes and Thomas Lemar, you are putting him in a strong position to succeed.

It took Pépé – mostly down to Marcelo Bielsa playing him out of position as a centre-forward – nine games to open his account for Lille. But under Christophe Galtier, he has found the net three times in the last four games. Taking his total to seven non-penalty goals with an NPxG of 4.19, he has shown why they made the effort to sign him for €10million in the summer. 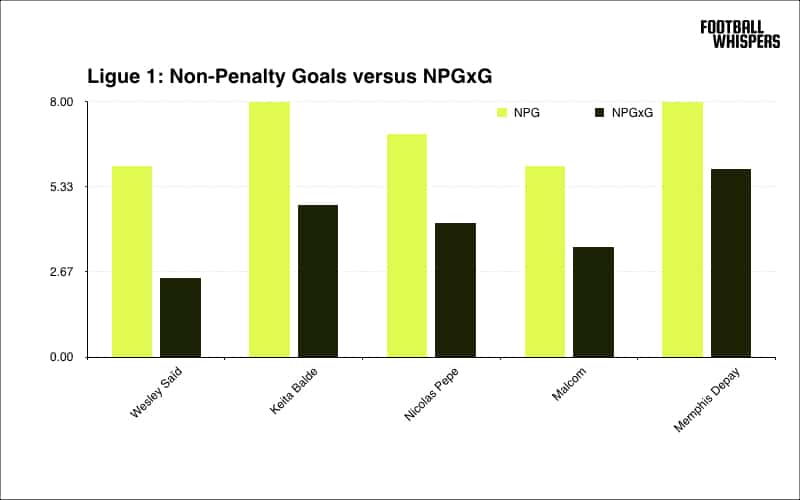 Tottenham Hotspur transfer target Malcom may not have the highest conversion rate (13.6 per cent), but if you’ve seen some of the goals he’s scored this season you’d understand why he is out-performing his xG.

His spectacular efforts for Bordeaux have seen him find the net six times from open play, despite his NPGxG of just 3.44. The Brazilian is a respected threat from distance, which helps him beat defenders and punish the opposition in other ways too.

Like Malcom, Depay sneaks into the top five as a proven outside-the-box threat. Although his NPGxG is the highest on this list at 5.9, and third out of all the players measured, he is still out-scoring the metric with eight goals for OL.

Mbappé leads the youngsters with an NPGxG of 10.48, but with ten goals, he’s scoring what he’s expected to, which is superb from the PSG forward but hurts him compared to the others.

Out of the 35 players’ measured, 19 of them are exceeding their xG expectations and one of the most interesting ones to watch is Monaco’s Rony Lopes.

Slowly developing into another star at the Stade Louis II, the former Manchester City youngster has found the net eight times with an NPGxG of 6.66, giving him a conversion rate of 17.3 per cent and an xG90 of 0.34 – the fifth-best out of everyone on this list.

Known primarily as a creative force, he’s blossomed this term into a dangerous option all across the attack, and along with the other players who have found the net this term, expect him to be linked to a team near you in the not-too-distant future.