It’s the 3rd of February and as quick as it came around, the January transfer window has closed for another year. In general it was a pretty tame month for clubs making moves, as teams looked for quality at a small cost but only want to sell at a premium. Doing business in the winter can be cold and lonely. And that’s just for the managers.

If you’re a player and want to move during January it can often be an even tougher nut to crack. Teams, afraid of not being able to buy a replacement, hike up prices in order to have the money to replace the outgoing player, something not usually easy. This risk drives up the price, too. Which usually means a player may be waiting a long while to get his dream move.

In the Premier League goal scorers are the money-makers. They are the players who get the most applause when teams are winning, and the players who get the most flack when things aren’t going well. This is why the risk and the reward are in fine balance with both the selling and buying club. When you’re in a relegation battle the above factors multiply massively. And this is what brings us to one of the hottest properties in English football. Saido Berahino.

Berahino, born in the African country of Burundi and raised in England, is West Bromwich Albion’s star striker. Brought up through their Centre of Excellence since the age of 11, Berahino has scored goals at whichever age group he has played for. With 22 goals in 88 games for West Brom and 10 goals in 11 games for England U21s, it is obvious that he can find the back of the net. He is a goal scorer. He is, to West Brom at least, the money maker.

During the summer of 2015, Tottenham Hotspur made multiple bids for the young forward. Jeremy Peace, the West Brom chairman, rejected these offers immediately, citing the lateness of the offers in the window coupled with the poor financial structure of the deals themselves. An offer coming in mid-August makes it very tough for the Midlands club find a suitable replacement before the window closes two weeks later. Poor financial compensation makes that task almost impossible. Peace had made his mind up – no meant no.

Berahino’s Twitter rant on 1st September once the window was about the close, did nothing to help his relationship with Peace, stating that he would never play for the club again under that chairman. While this was going on, the only man affected in the short term was a piggy-in-the-middle in the form on Tony Pulis. Left with an uncooperative player and no money, the Welshman was in a pickle.

Fast forward to now and Peace again rejects two offers. One from Newcastle and one from Stoke. Both bids are in the region of £21 million and both aren’t even entertained, let alone negotiated. For a player who never made an appearance from 31st October – 30th January, that is a curious decision. Which leads me to ask the simple question – what is the plan for Saido Berahino?

First things first, it is important to remember the teams offering to buy the player. Newcastle are seven points behind West Brom in 18th position. Both teams are looking to secure their Premier League status for another season. Although West Brom have played most of the season without Berahino in the side and are in this position, I would argue that Newcastle’s chance of surviving relegation upon buying the new forward increases massively. With a proven goal scorer in their team from the beginning of the season, I don’t believe Newcastle would be anywhere near the bottom three. This is something Peace will probably have seen himself. Weakening yourself to strengthen a rival is rarely worth any amount of money. Especially when it involves a striker.

If the chairman of West Brom won’t sell the forward to Spurs, a team who are – with no disrespect – in a different class to themselves and won’t sell to a team of similar standing in the table, them what do West Brom actually want with the player? It could actually be fairly simple. He may need him to bail them out. 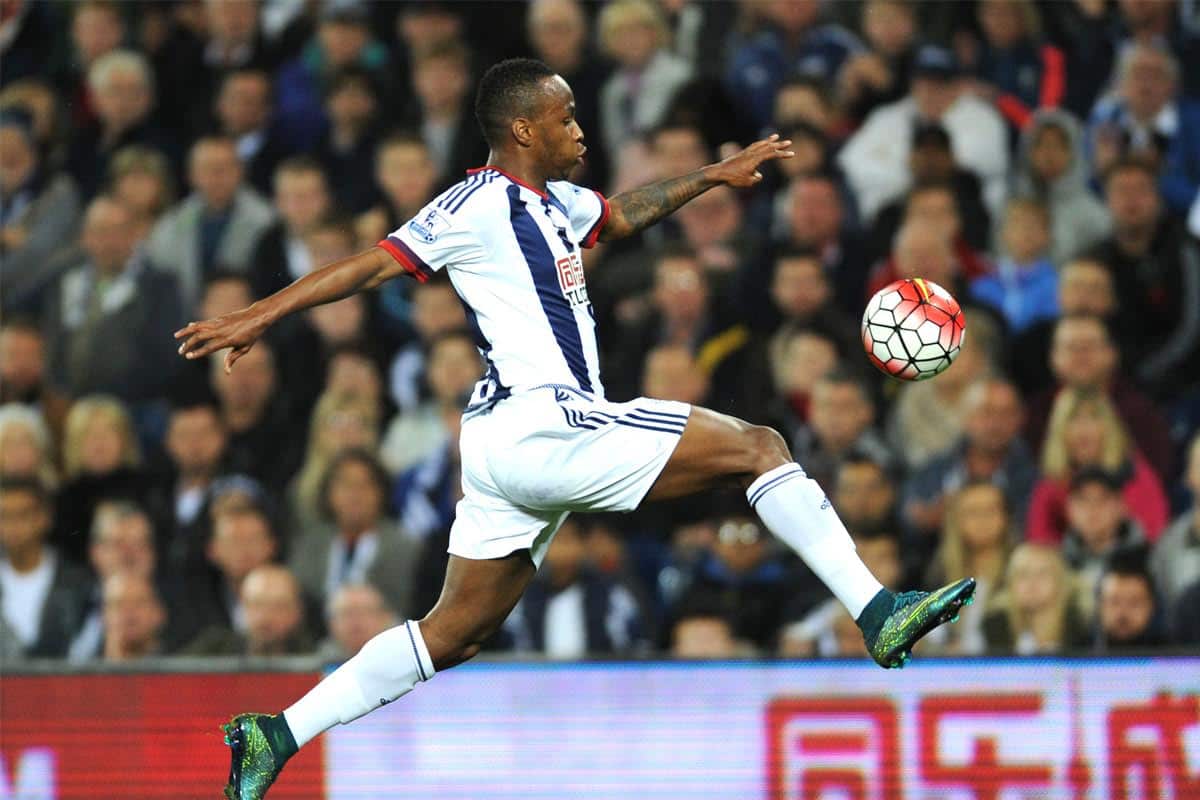 Looking at the past two seasons, the teams that have been relegated have tended to have poor goal-scoring form, showing that it doesn’t matter how good your defence is, if you can’t score, you will find it very hard to sustain a stable position in the league. In 2013/14 season alone, out of the teams that got relegated, their top-scorers were as follows:

2014/15 isn’t much different, with only QPR having what you would class as a top forward with an acceptable goal return:

If trends are to be trusted, the above only proves that West Brom will in time need to call on Berahino to propel them up the league. According to WhoScored.com, their average goals-per-game ratio is one, with their top scorer being a joint affair between James Morrison and the man in question, Saido Berahino, both of whom are on three each in the Premier League. West Brom’s top scorers are a midfielder and an out-of-favour striker who hasn’t started a match in the league since 31st October. If they are to eventually keep their status as a Premier League team, Berahino will need to be brought in from the cold. The facts are hard to ignore.

Once the summer comes round, the hierarchy at West Brom are going to need to have a think about how they play their cards when it comes to the Berahino saga.

After trying, and failing, to tie the player down to a new, improved contract and in turn turning down offers from multiple clubs to buy him, the club have allowed the player a certain amount of power when it comes to the summer transfer window. The Baggies however, do have one remaining play. Allow the players contract to wind down and go to a tribunal to set a fee for the player. But how does this work?

When a player is under 24 and out of contract, the decision to award a compensation amount to the club who are losing the player, which would be West Brom in this case, is set by a tribunal in a court of sporting law. The tribunal (their official name being the Professional Football Compensation Committee) brings together a team of impartial mediators to set the fee based on a number of key influencers. Investment in the player previously and the likelihood of future successes are two major factors that can determine the fee that the PFCC sets. Like in a standard court of law, each team involved in the dispute will put forward their case for how they value the player in question. In this case, West Brom would argue that their investment in Berahino has lasted 11 years, and whilst still at a young age, he will more than likely improve, and in time should be valued at more than he is worth right now. It would be hard to disagree with them.

One factor that doesn’t work in the favour of the club losing their player is any bids that may have come in for him previously. A bid for a player does not determine his worth. For example, in the case of Danny Ings leaving Burnley, Tottenham bid £12million for his services before he decided to agree terms with Liverpool. Burnley may argue that the PFCC should set his compensation fee at close to £10million, yet this is not how the committee come to a decision on a players’ value.

Berahino’s situation isn’t rare, but a player of his proven quality going before a tribunal would make for interesting viewing. My guess is that it won’t happen. The record for a compensation amount set stands at £6million for Daniel Sturridge when he moved from Manchester City to Chelsea. Another factor to consider, especially from a buying club’s perspective, is that any fee set by the tribunal is set in stone. The situation can only go before the PFCC when a team has already taken up the registration of the player, hence the debate between the two clubs as to the compensatory fee. The price is set by the committee and neither club is allowed to contest this. Once their cases have been put forward and a decision has been made, that is the end of that matter for the clubs. This is something that worked against young Liverpool left-back Brad Smith before he eventually agreed to a reduced contract with the Reds. Because of his potential, a fee was likely to be high, or at least too high for the Championship teams rumoured to be interested in him. This had a negative effect on his ability to move to said clubs, and Liverpool kept his registration rights. This was a clever move by Liverpool, and partially forced Smith’s hand. A move that looks to have paid off for both player and club as he has recently started making waves in the first team. This indeed shows that a tribunal can be an interesting place to go for all parties.

My opinion on what will happen in this case is that West Brom will soon start playing Berahino from minute on in Premier League games. Teased with the possibility of joining up with the full England squad for Euro 2016, the player will score the goals to keep West Brom in the Premier League. After this though, I do believe he will get his move to another club, Tottenham or Liverpool being a likely destination. I don’t think he has yet proved himself as good enough for a fully-fledged top 4 club, and both teams above could do with a striker joining their squad.

The Saido Berahino/Jeremy Peace/West Brom situation is a complicated, drawn out and totally intriguing one. As we have seen above, teams need goal scorers, especially ones at the top and bottom half of the table. Getting goals can be the difference between Europa League and Champions League and relegation and Premier League, and West Brom, quietly at least, will know this. Tony Pulis has made a living off defensive minded teams with strikers that work hard and score few, but in Berahino, the temptation may be to let the shackles off and live a little. At least whilst they have him.