It's felt a little like Mohamed Salah FC at Anfield this season. The £37million summer signing shed the ‘Premier League flop' tag given to him during his time at Chelsea in quick time to set the the English top flight alight with a number of eye-catching performances.

The Egyptian attacker has 20 goals for the Reds in all competitions and we're only in December. He's only the third player in the club's history to achieve such a feat after goalscoring legends Ian Rush and Roger Hunt. It means the 25-year-old managed something Robbie Fowler, Michael Owen, Fernando Torres and Luis Suárez all failed to do.

The Salah FC tag isn't a negative for Liverpool, though. It's recognition the Reds finally have a player capable of hitting 30 goals in a season, something they've lacked since Suárez left in the summer of 2014.

However, unlike other teams who have a player finding the back of the net on a regular basis, Liverpool aren't a one-man team. They aren't reliant on the former Roma star and assuming that is doing a disservice to the other members of the frontline on Merseyside.

Philippe Coutinho, Roberto Firmino and Sadio Mané aren't reaching the same goalscoring heights as their team-mate but all three are key cogs in Jürgen Klopp's attacking system and all are flourishing alongside the Egyptian. Especially the former two.

They've all fleetingly been praised in the media but a lot of the attention is centred around Salah. Despite being deprived of light – they're in the Egyptian's shadow – the attacking players are growing.

Mané has had a stop-start 2017/18 campaign. His controversial red card against Manchester City ruled him out for a couple of games and then an injury picked up on international duty meant he didn't play a match for Liverpool in over a month.

Combine that with the fact Klopp's changed the system and Mané's role and it's little wonder he's not finding the back of the net as regularly as people might have expected.

Despite this the former Southampton man has scored seven goals and grabbed five assists. He's been involved in a goal every 102 minutes this season, an improvement on the 124 minutes from last season, not bad for a player many believe is underperforming albeit while looking at a much smaller sample size. 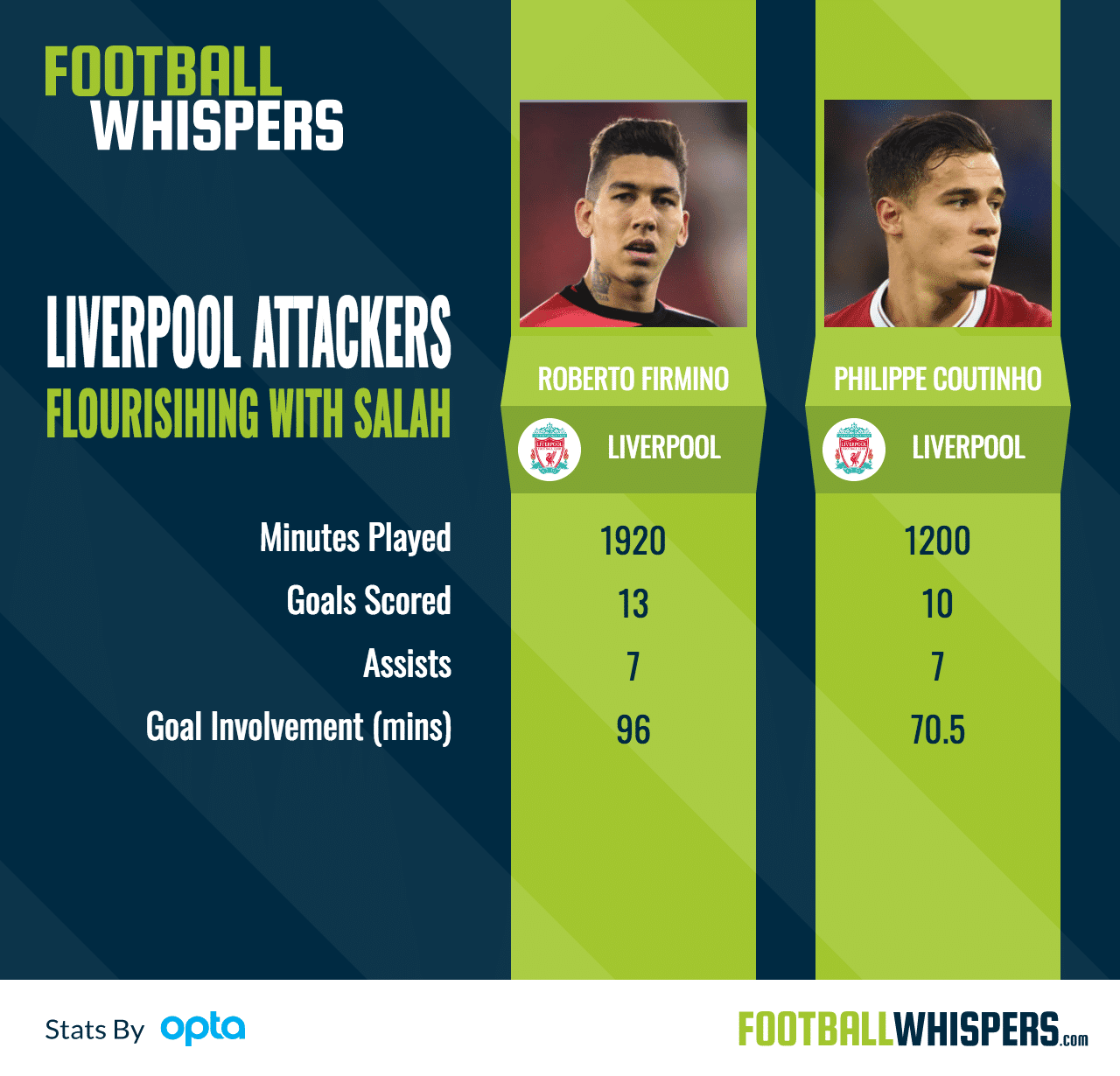 But it's the Brazilian duo who have taken their games to new heights this season. It's even more impressive when you consider Barcelona transfer target Coutinho was ruled out with a back injury at the start of the campaign amid rumours he was looking to force through a move to Spain.

He stayed on Merseyside and hasn't sulked. Instead he got his head down and is comfortably having his best season to date. Any potential buyers will no doubt be impressed with his attitude.

He's currently involved in a goal every 70.5 minutes, scoring every 120 minutes and managing to grab an assist every 171 minutes.

A criticism often levelled at Firmino is that he's not prolific enough but he's a firm favourite of Klopp's because of what he does bring to the Liverpool team. His selfless play benefits Salah, Mané and Coutinho.

However, this term he's found his rhythm in front of goal. The Brazilian's two previous campaigns on Merseyside have seen him average 11 goals. He's already surpassed that total (13), and there's still five months of the season remaining.

He's currently involved in a goal every 96 minutes. The best stat to show what Firmino is all about, though, is the amount of times he's scored and assisted in a single game. The number currently stands at seven, meaning in every game he's assisted he's also found the back of the net himself.

It's quite the record and even more impressive when you consider he's been shifted around the forward line to cover for injuries and suspensions at times. 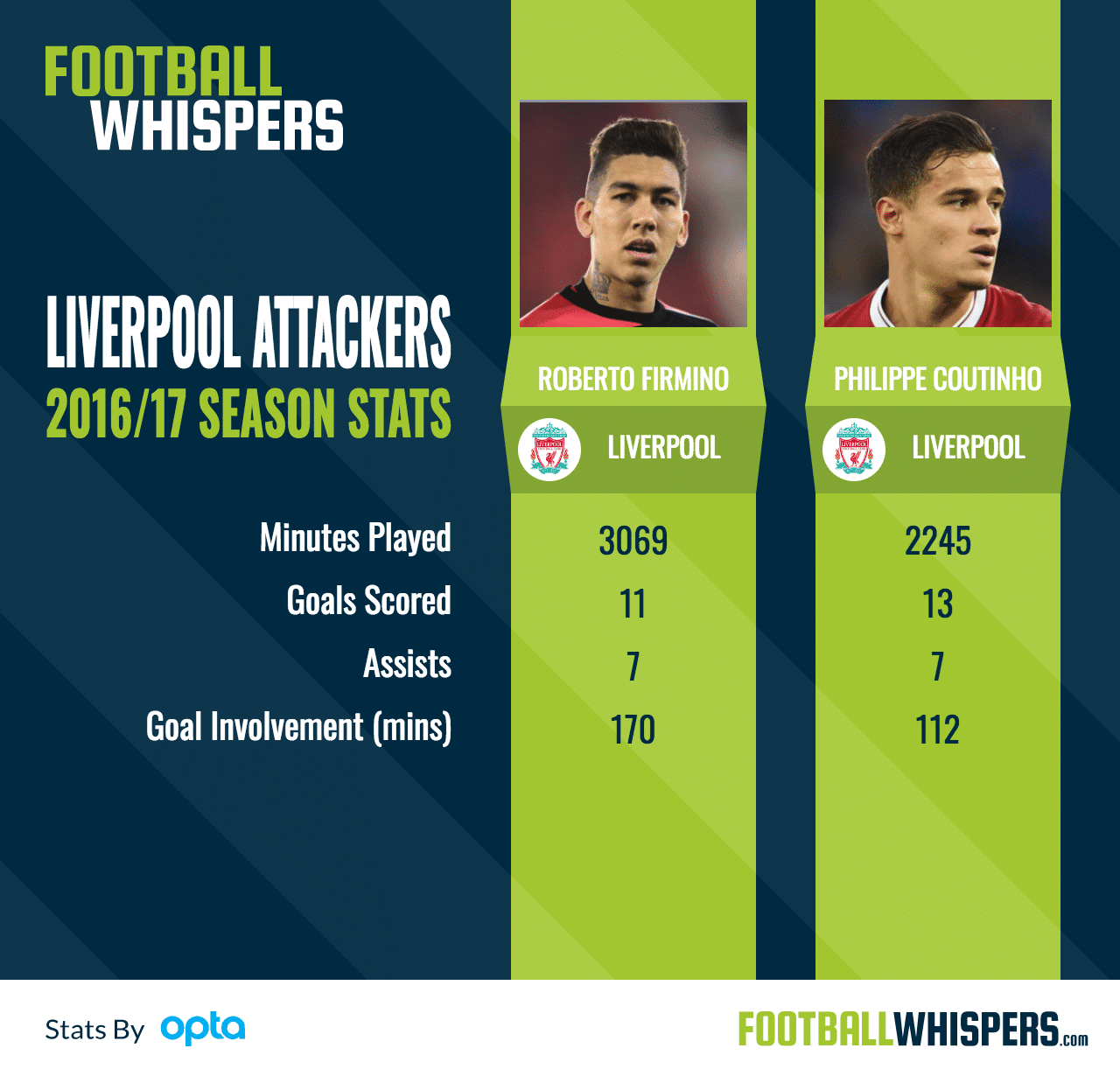 You really see the improvement in the two players when looking back at their stats from last season. It's a larger sample size so that needs to be taken into account/ After all, there's no guarantee the Brazilian's will sustain their current form for he entirety of the campaign.

Last season, Firmino was involved in a goal every 170 minutes, an extra 74 minutes compared to this campaign. Coutinho is also involved in a goal more often in 2017/18, needing 42 minutes fewer than in 2016/17. Furthermore, both players have matched last season's total of seven assists already.

It appears as though Klopp's found the perfect balance for his team going forward. All four are goal threats and there's no obvious way to keep all of them shackled throughout the 90 minutes. For context, there have been more games where Klopp's men have scored four or more goals (7) than matches where they've failed to find the back of the net (4).

Many will put it down to the arrival of Salah but it's clear that Klopp's looked to build an attack loaded with goals. They've scored three or more goals in 14 of their 27 matches this season. That's not all because of the ex-Roma man.

But will Klopp and his players really mind going under the radar if they continue to find the back of the net on a regular basis? It's allowing Firmino and Coutinho to covertly go about their business without the spotlight fixated on them.