This year marks the 25th season of the Premier League era, so what better time to assemble the greatest XI from English football’s top flight from the past quarter of a century. 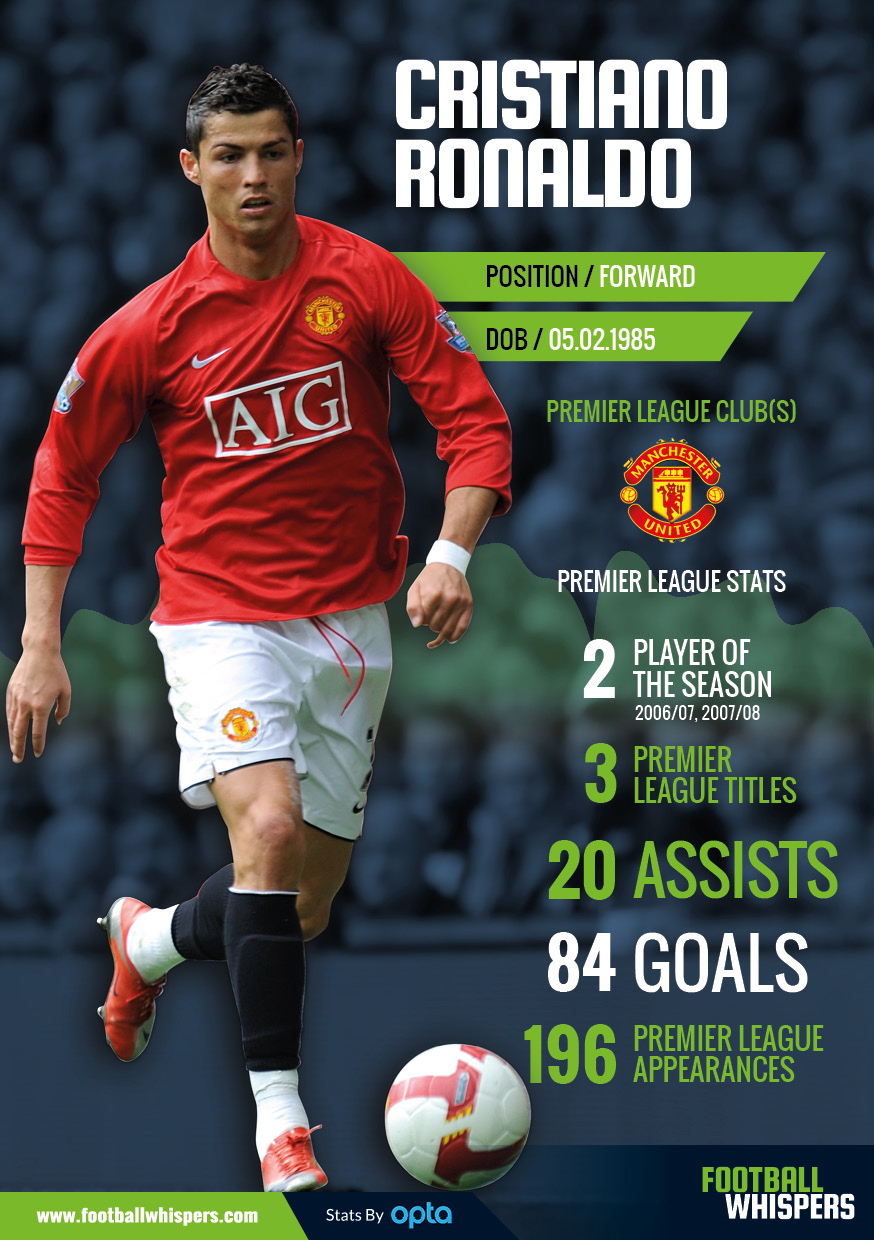 The folklore surrounding the £12.24 million move of Cristiano Ronaldo from Sporting Clube de Portugal to Manchester United in the summer of 2003 goes that, on the flight home after a pre-season friendly against the Verdes e Brancos to mark the opening of the José Alvalade stadium, certain members of the United squad implored Sir Alex Ferguson to sign the kid who’d ran them ragged that day; the legendary Scot obliged.

Of course, Ferguson and his scouts were well aware of Cristiano Ronaldo dos Santos Aveiro (to give him his full name) and his prodigious talents long before that night. Indeed, the fact that Arsenal and Barcelona were sniffing around the 18-year-old probably played more of a part in the Red Devils’ swift move to sign the youngster than the recommendation of the United players, but it’s a fun story nevertheless.

David Beckham had just been sold to Real Madrid which, as well as opening up a berth on the right side of the United midfield, also created a vacancy for a new marketable personality at Old Trafford – the skinny teenager with the boyband hair fitted the bill; the iconic No7 shirt was his.

Though his immense talent was always obvious, Ronaldo took time to fully blossom into a world class star. But when he got there, he set the Premier League alight with dazzling footwork and an abundance of goals.

Where do you start? Well, if you have a spare couple of hours head to the CR7 official website to scan through his accolades.

As with most teenage footballers, consistency is often lacking in their game, and the young Ronaldo was no different. Mesmerising dribbling skills were too seldom combined with dangerous crosses or accurate shots; missing the much sought after ‘end product'.

But despite some frustrating performances, Ronaldo was voted Manchester United’s player of the year in his first season and capped his maiden campaign in England with a virtuoso display and a goal in United’s 3-0 FA Cup final victory over Millwall.

The Portuguese became a national hate figure following his role in club-mate Wayne Rooney’s red card against Portugal at the 2006 World Cup, and his future at Old Trafford was thrown into question.

But Ferguson convinced Ronaldo to stay, and almost immediately the former Sporting man began repaying his manager's faith. His 23 goals in the 2006/07 season helped United reclaim the Premier League title for the first time in four years, while earning him the accolade of being named PFA Young Player of the Year, PFA Player of the Year and FWA Footballer of the Year.

The following season, Ronaldo took his game to an even higher level, scoring 42 goals in all competitions, including 31 in the Premier League (the joint-most since the season was reduced to 38 games) to fire United to a Premier League and Champions League double. For his efforts, he was again named PFA Player of the Year and FWA Footballer of the Year – the first player to win all four PFA and FWA player awards – while also claiming his first Ballon d’Or.

Real Madrid wanted to sign Ronaldo in the summer of 2008, and the player was keen to join Los Blancos, but Ferguson again put his powers of persuasion to good use and convinced his star man to stay for one more year.

In his final season at Old Trafford, Ronaldo scored 26 goals to help United retain the Premier League and finish as runners-up in the Champions League, before joining Real Madrid for a world record £80m fee.

Ronaldo’s style evolved greatly over the years. As a young player, he was a fast and skilful winger with a penchant for a step-over.

But as he approached his early twenties, he developed an unquenchable thirst for goals, which led to his game becoming much more direct. Though still blessed with tremendous pace and dribbling skills, Ronaldo’s game began to revolve more around finding the shortest route to goal, as his heading and finishing became the most potent tools at his disposal.

The Ronaldo that we see at Real Madrid today has become arguably the greatest goal-getter the game has ever seen; the seeds of that transformation were sown in the Premier League. 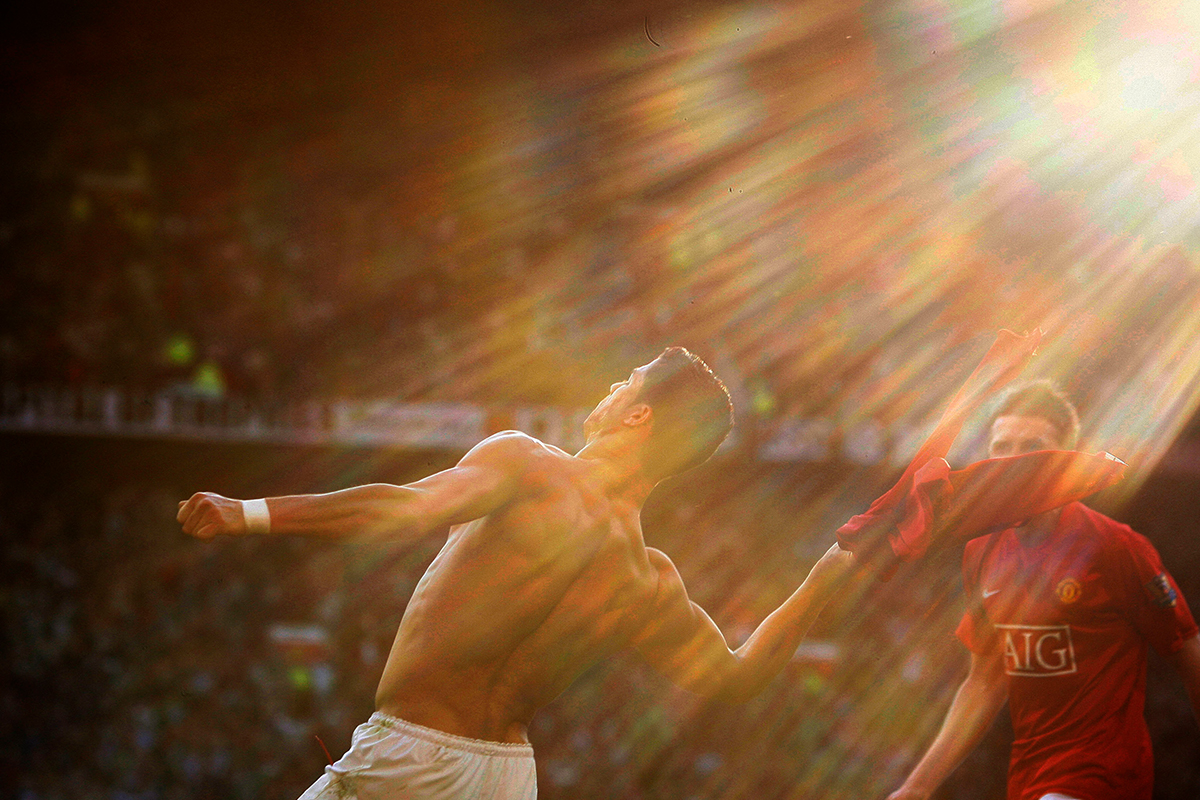 Ronaldo’s legacy at United endures, as his name is still regularly sung at Old Trafford.

But even away from the red side of Manchester, the Portuguese star is a shining example of how talent alone is not enough to become a star of the world game; dedication, discipline and hard work are just as important.

Ronaldo’s work ethic on the training field is often praised by players and coaches who have worked with him. His development from a skinny, lightweight ‘Fancy Dan' into a robust, powerful and dynamic forward, was down to his time spent in the gym, crafting his impressive physique, and his self-discipline off the field.

Ronaldo’s peak years may have been spent away from the Premier League, as the true extent of his goal scoring prowess was seen more in the immaculate white of Real Madrid. But his journey to greatness – from boy to man – was traversed in England; we witnessed the germination of a truly elite footballer.

Ronaldo burned brightly in the Premier League, before walking off into the Iberian sunset.