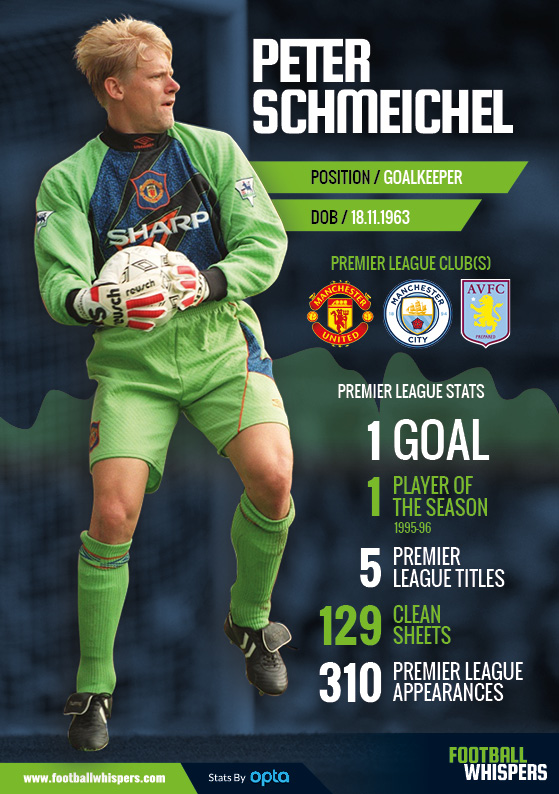 Born the son of Polish nationals in Gladsaxe, Denmark on 18 November 1963, Peter Schmeichel was always destined to be a top-flight goalkeeper thanks to his confidence, strong personality and sheer determination to succeed. In case things didn’t quite go to plan, he even worked in advertising for the World Wildlife Fund part-time in his youth. Thankfully, maybe not for endangered animals or Premier League strikers, young Peter never looked back and went on to become one of the greatest goalkeepers the game has ever seen.

In his first full season at Old Trafford in the 1991/92 campaign – after joining for £550,000 from Danish club Brondby – Schmeichel came agonisingly close to claiming the old Division One league championship. However, the Manchester United challenge faded towards the end of the season as they were eventually pipped at the line by Leeds United.

That summer, however, Schmeichel had tasted international glory after Denmark – who were only in the tournament as replacements for the disqualified Yugoslavia – won the 1992 European Championships in Sweden.

The following season brought the inaugural Premier League season, and a whole new TV audience saw the giant goalkeeper and his Manchester United colleagues eventually get their hands on their first league title in 26 years.

In his time at Old Trafford Schmeichel would be key to United winning 10 major trophies, including: five Premiere League titles, three FA Cups, a League Cup and the Champions League trophy in 1999. The highlight of his eight years between the sticks at Old Trafford will surely always be remembered as that 1998/99 season when Schmeichel captained United to the League, FA Cup and Champions League trophy in his final season at the club.

It’s fair to say that Schmeichel changed the art of goalkeeping following his arrival in the English game. His huge frame and athletic build made him extremely hard to beat but his athleticism and dominance of his penalty area also made him something of a pioneer in terms of the modern-day keeper.

Rather than waiting for a shot to come to him, Schmeichel would often attack the ball first, giving attacking players little time to think about what they were going to do next. His trademark ‘starfish' jump, although at times making him look like a man possessed, would often be the difference between a defeat and a clean-sheet.

It could be argued that he was also instrumental in the development of the ‘sweeper keeper', which is so en vogue in the modern game. Unafraid to leave his box if need be, either to defend his goal or to add an extra body in attack if his team were chasing a game, the Dane even managed to score nine goals in his career. 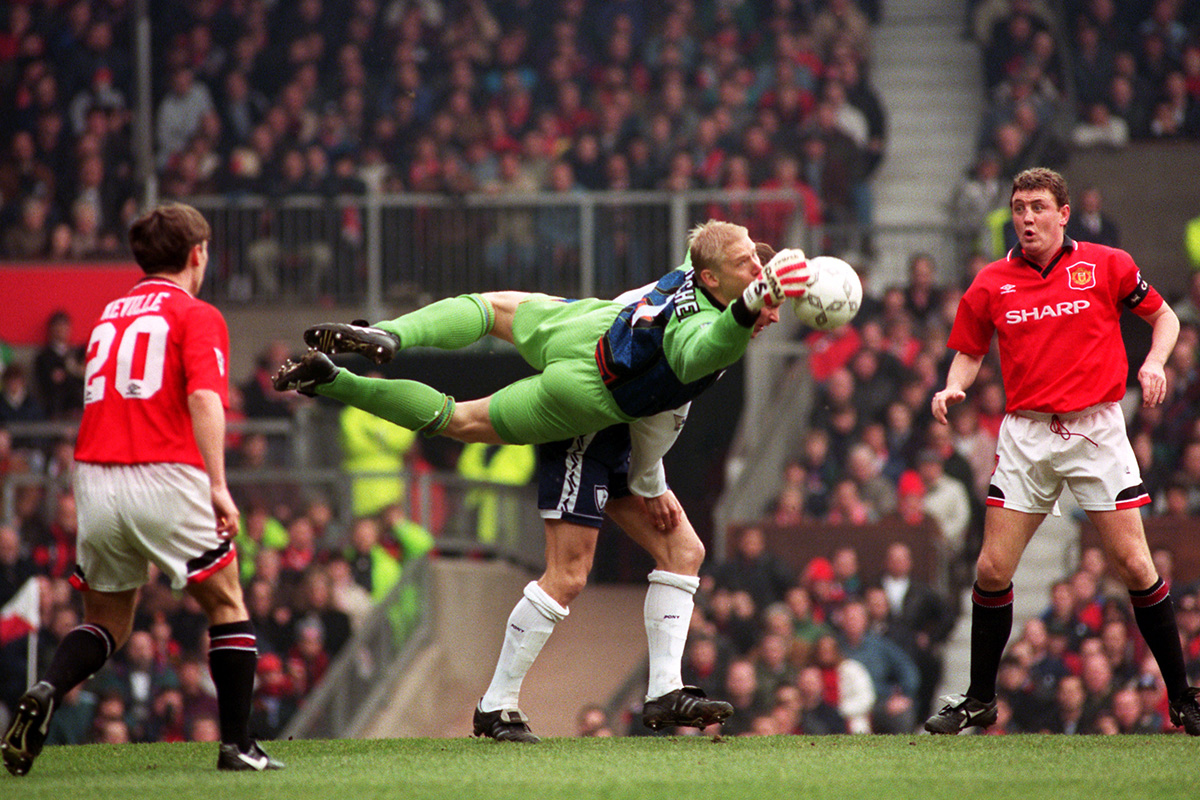 Such was his importance in Manchester United’s team throughout the 1990s, the Old Trafford side spent much of the following decade trying to find someone to fill the void that he left when he finally decided to end his association with the club.

Despite only spending eight years at Manchester United, his performances, not to mention his sheer presence on the pitch, has led many to feel that he was the greatest goalkeeper to play for the club.

The fact that he still went on to play at the top level for a number of seasons after departing United, including at Manchester rivals City and Aston Villa, is testament to his dedication as a professional, his athleticism and his desire to keep playing after he had won pretty much every major honour.

With his blonde hair and giant frame, which was usually clad in various combinations of bright colours, Schmeichel cut a distinctive figure and went on to become an icon of the game in the Premier League era. He could move in ways that defied logic, not to mention gravity, and his saves, as well as his sheer presence, would often be the difference during a time when his side were competing on all fronts and dominating all around them.

When he wasn’t throwing himself at the feet of onrushing strikers or tipping over goal-bound efforts at the last moment, he was marshalling his defence and encouraging those around him to soldier on, often when the game looked over. The vocal stopper would try to squeeze the last drops of energy out of a side that he felt still had more to give before the final whistle was blown.

But it wasn't just razor-sharp reflexes and expert handling that made Schmeichel special as Alex Ferguson explained some years later in his autobiography. “Schmeichel pulled off saves he wasn't entitled to make. There were moments of wonder where you’d think ‘Jesus, how did he do that?’. But there is more to the art than the goalkeeping, it’s a question of the personality you bring to the job. Not only do keepers have to deal with the business of making saves, they must cope with the process of making errors.”