It is sacrilege not to include the likes of Kenny Dalglish, Alan Hansen and Graeme Souness when you are putting together a Liverpool All-Time Best XI – they rightfully deserve to be the first names on that team sheet. They earned it. All three men have legacies at the historic club that few men share.

But… it would be disingenuous for me to do so having never seen them play live. Yes, I have heard the legends and stories and seen the highlight reels but it is just not the same.

This is my Modern Era Liverpool Best XI, which could also be considered a Liverpool Premier League XI. I can only apologise for being born when I was! 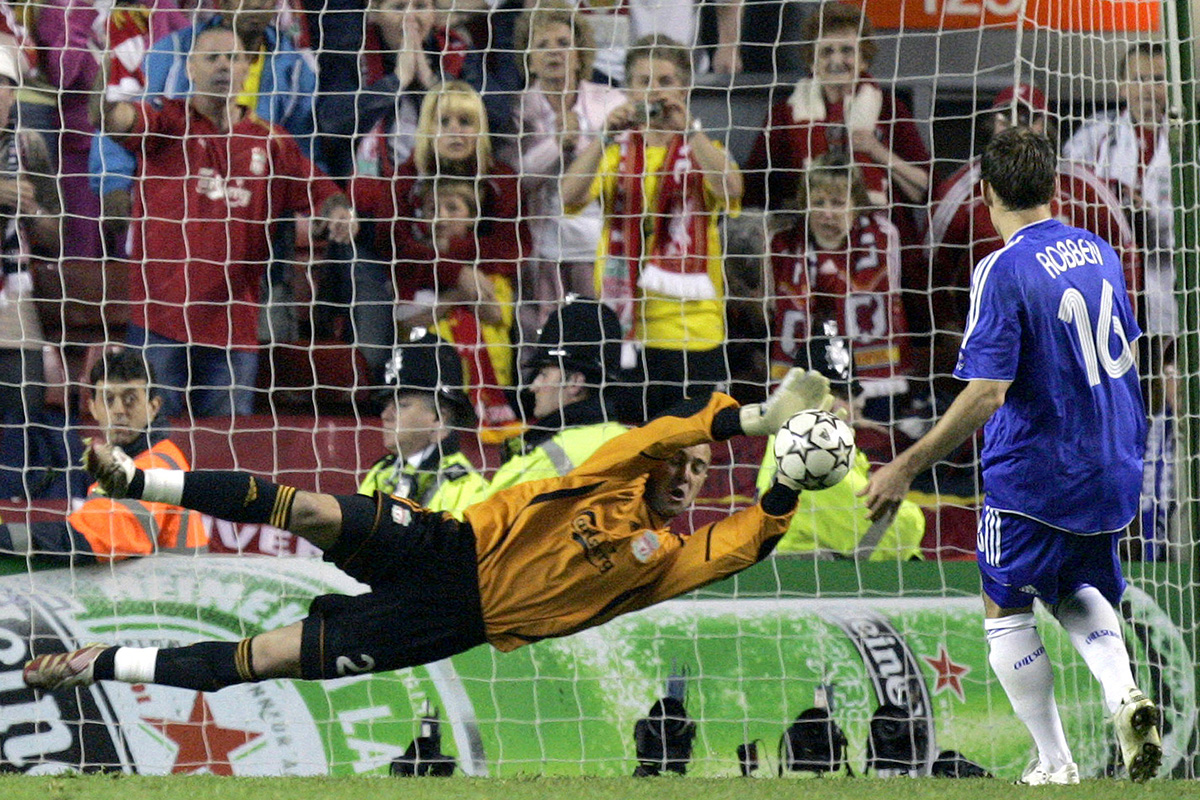 Forget the Stadium of Light ‘Beach Ball-Gate', the Spaniard is easily the best goalkeeper Liverpool have had since the inception of the Premier League. It is not even a close-run contest. From David James to Sander Westerveld, I thought Liverpool were jinxed when it came to goalkeepers, but then in the summer of 2005 Pepe Reina arrived from Villarreal for a bargain £6 million.

He was by no means perfect, and his final season at the club was forgettable with a series of high-profile errors. However, for a period he was arguably the best keeper in England and one of the best in Europe. His record at Liverpool stands at: 153 clean sheets in 330 matches (stats courtesy of: LFCstats.co.uk).

This was not easy. It was between Finnan and Markus Babbel, but the former pips it purely for the longevity of his career at Liverpool.

The Irishman joined Liverpool from Fulham for £3.5m in 2003 and is up there with the best value for money signings in the club's history. He appeared in two Champions League finals, and a FA Cup final and League Cup final in his five years at Anfield. Solid, reliable and just an unspectacular player who never seemed to let the team down – a trait worth its weight in gold in modern football. 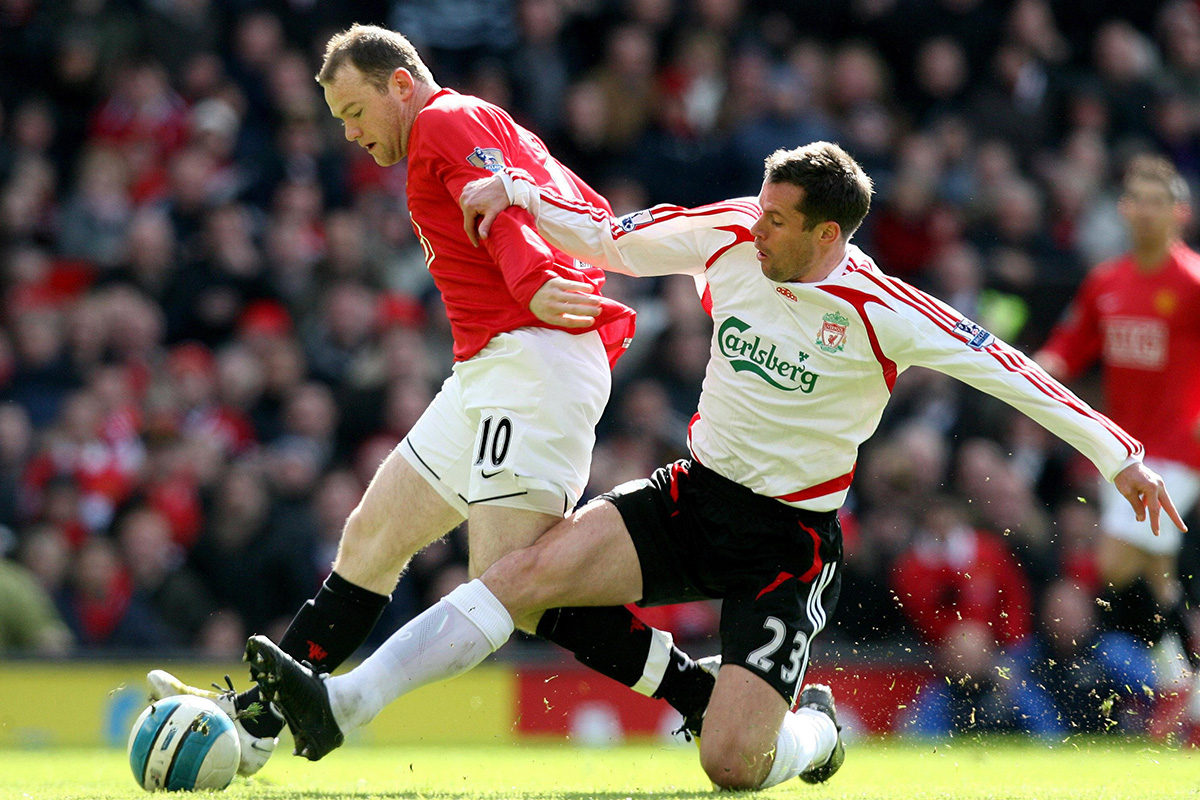 One of the few local lads who was able to use his passion to build on his ability – he was not in the team for the best part of two decades just because he is from Bootle. Carragher understood what it meant to play for the club, ensuring he performed at a level he would never have reached had he signed for another Premier League side. It was the perfect mix.

A utility man early on in his career, the 737-game Liverpool legend was put at centre-back under Rafa Benitez and never looked back. Whenever I think of Carra I think of Istanbul 2005, when he was cramped up so badly that he could hardly walk but was still throwing his body at everything to repel that ball as time ticked on. That kind of never-say-die attitude is why a Champions League medal sits proudly in his long list of career honours.

An unknown when he signed from Willem II for £2.6m in 1999, the Finn was a mainstay in the Liverpool defence for a decade. Look up the word ‘bargain’ in the dictionary and there you will see a picture of Hyypia – metaphorically speaking, of course, unless it is a copy of the Liverpool-English Dictionary you own.

The imposing 6’ 3” inch ball winner made well over 450 appearances for the Reds and won nearly every honour imaginable. It did not matter who he was partnered with his form never seemed to dip. It is not something he is necessarily remembered for, but he also popped up with big goals for the Reds – including a volley against Juventus en route in the 2005 Champions League quarter-final. Every team needs a Sami.

This one was tricky. Many fans would probably go with John Arne Riise but Aurelio's technical ability and influence when he did play means he edges it for me. He had the vision and the ability to execute passes the likes of Andrea Pirlo would be proud of. What might have been had it not been for injuries.

The Brazilian full-back just oozed class. He left foot was a wand and he scored and assisted big goals. Memorable goals against Manchester United, Chelsea and Portsmouth were added to with two assists against Arsenal in a 4-1 win and the opening assist as Liverpool defeated Chelsea 2-0 in 2009. 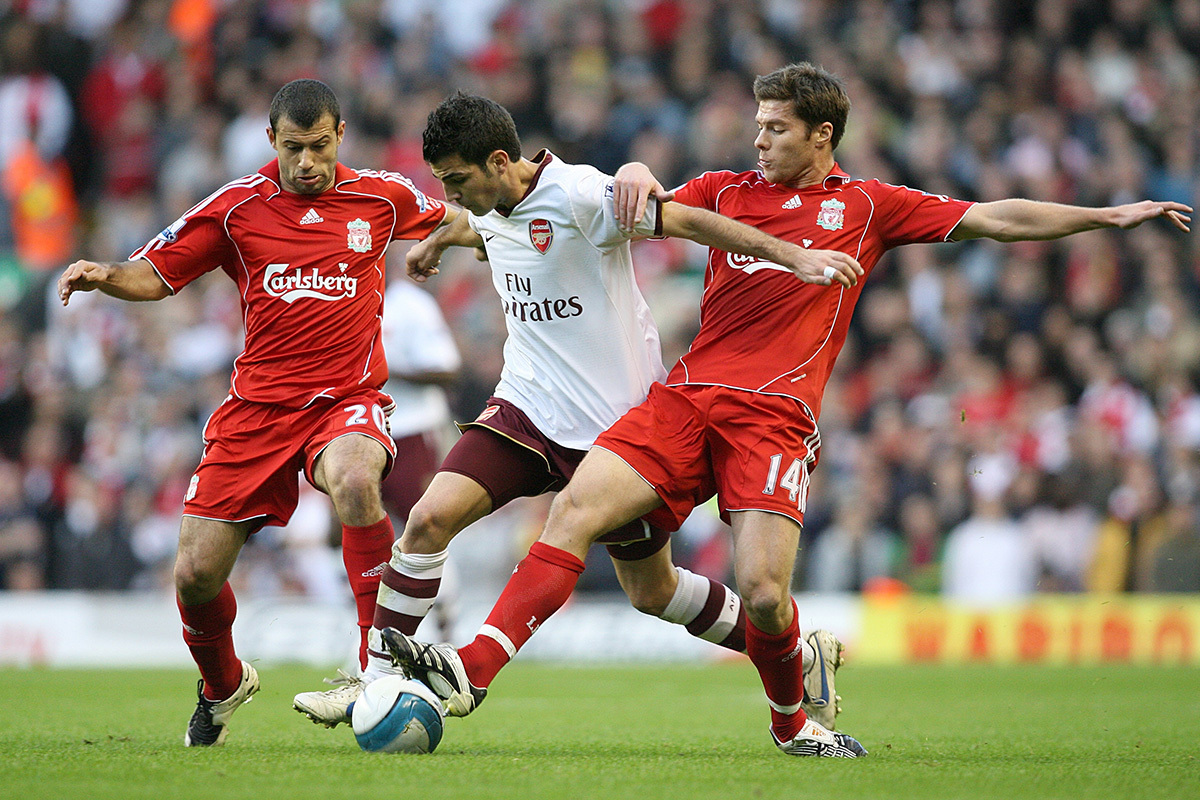 These two are a package deal. They were the perfect duo, Alonso was the creative force from deep and Mascherano was the destroyer. They were in sync, it was natural and it was just flawless.

While Mascherano's arrival into the English game was mired in controversy, the Argentine's time on Merseyside alongside Alonso was an unedifying success – although the pair could not repeat the Reds' heroics of two years previously as they lost 2-1 to Milan in the 2007 Champions League Final.

Fans on the Kop were spoilt and, probably, took the pair for granted originally – but many would argue that six years later, they have yet to be replaced. It speaks volumes of how influential they were.

In the attacking midfield role Steven Gerrard was a force of nature. He carried the weight of expectation of the club and its supporters on his shoulders for years through many transitional periods. Despite this huge burden the skipper’s performances rarely dropped below world class.

He was continuously forming new, destructive partnerships with players: Michael Owen, Fernando Torres, Luis Suarez and Daniel Sturridge are just some to have benefitted from Gerrard’s inspirational performances and leadership.

There are just too many highlights to mention: those goals against Olympiakos in 2004 and West Ham in the 2006 FA Cup final; Istanbul… take your pick, and you have barely scratched the surface.

For me he is the best Liverpool player in its All-Time Best XI. 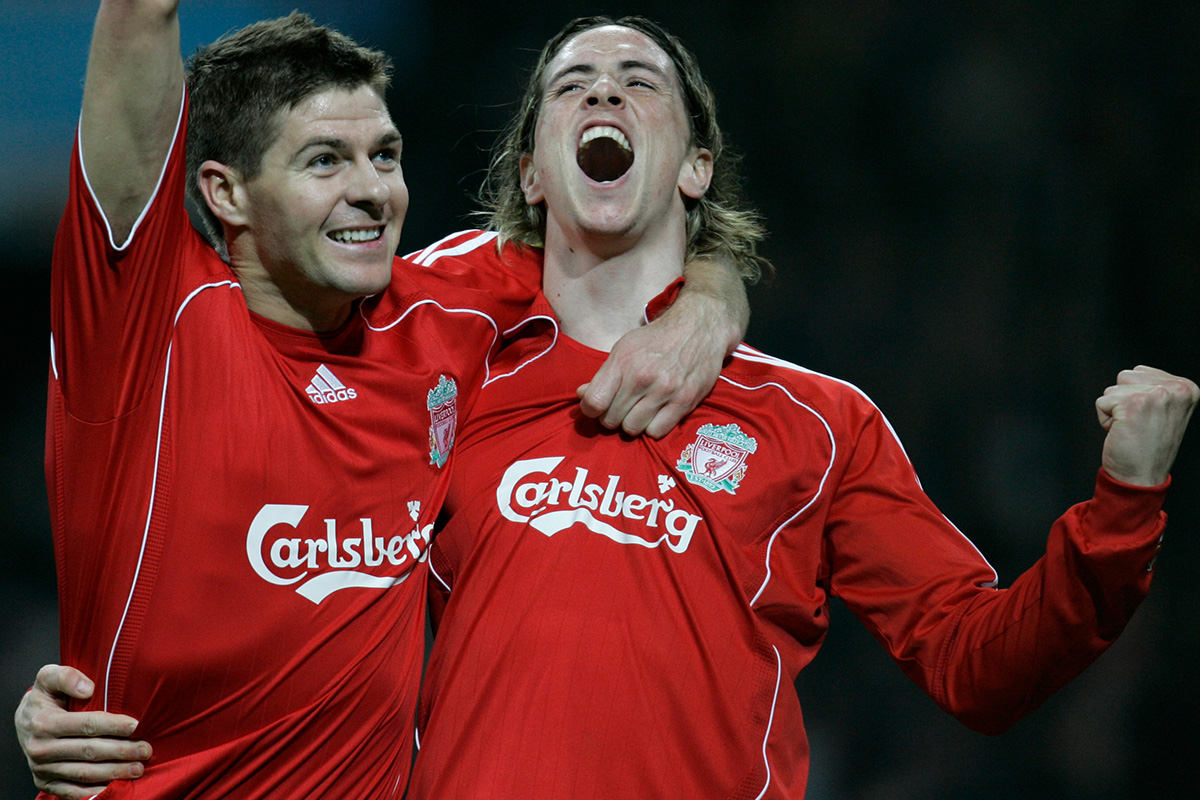 Liverpool have been spoilt for strikers throughout the club's history.

Unfortunately, I missed Robbie Fowler in his pomp. Michael Owen tarnished his reputation by purposely running down his deal so Liverpool only received £8m plus Antonio Nunez from Real Madrid for him. He then went on to play for arch rivals Manchester United, to really burn his bridges with the Red side of Merseyside.

Fernando Torres' betrayal was different. The club received £50m from Chelsea for the Spaniard when injuries were already beginning to slow him down – although an unpopular decision in many quarters, it was seen as a deal the club simply could not afford to turn down at the time.

For his three full seasons with Liverpool he was unplayable. His partnership with Steven Gerrard was feared throughout Europe. He was clinical, he was frightening and he was prolific.

Arguably the most talented player to ever play for the club. He can do things on a pitch many would not even dream of – and that’s not including his penchant for nibbling his opponents. But on a purely footballing level, he was just awe inspiring during his time in English football.

The three and a half years he was at the club was like a whirlwind of controversy, goals and good times. The Uruguayan marksman nearly fired Liverpool to the title a season after agitating for a move away to Arsenal. It shows the type of man he is: a winner whose passion rubs off on people. His final two seasons at the club saw him score an incredible 54 league goals in 66 league games. 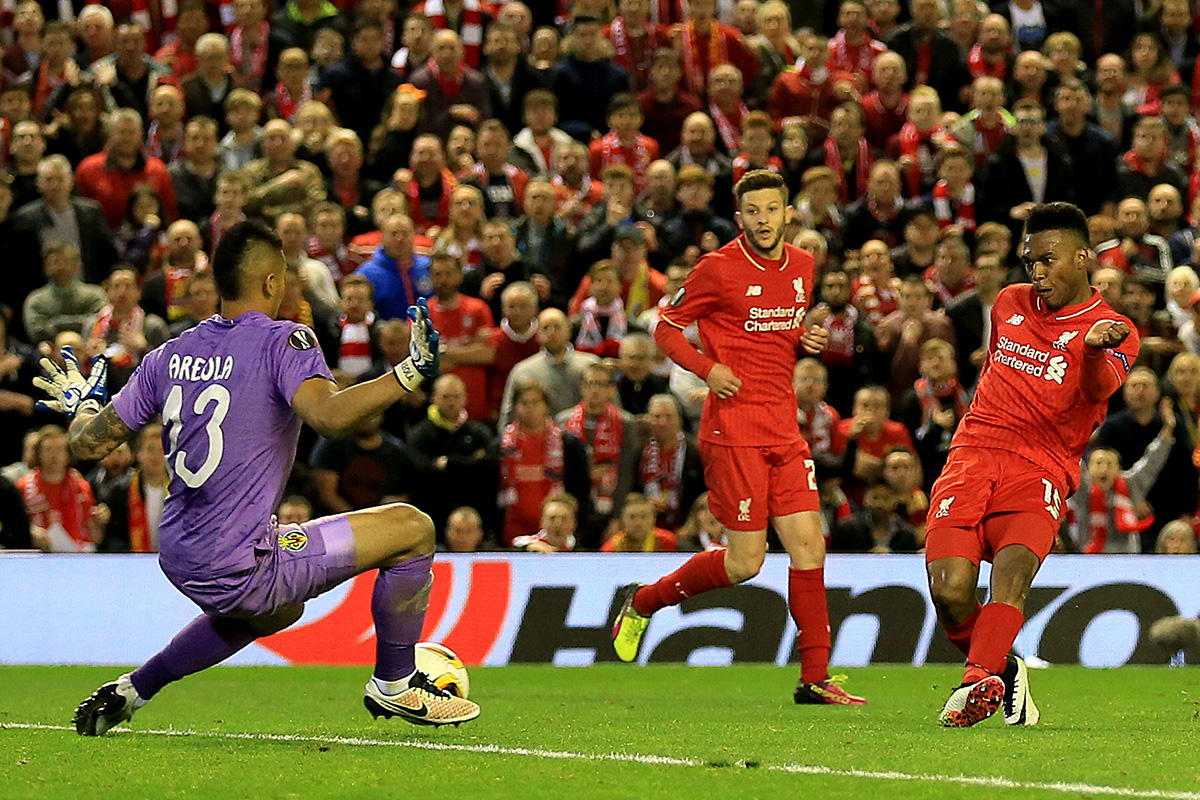 Given his record he should be considered one of Liverpool's greatest ever strikers from the Premier League era. But due to his injury record and having the misfortune of being in Luis Suarez's shadow for the 2013/14 season it means his efforts can often underappreciated or simply forgotten.

He is one of Europe's elite marksman but not your typical prolific forward. Strikers often score goals that are perceived as tap-ins but despite scoring so many (53 in 93 Liverpool appearances), it is not often that Sturridge pokes home a tap-in.

The England man is a scorer of vital and special goals for his club side – it is just a shame for the 26-year-old that neither his goal for his country against Wales at Euro 2016 or his Europa League final strike against Sevilla last season counted for nothing in the end.