The halfway point of this season’s Champions League group stage is almost upon us and there are a few mouthwatering matches to look forward to. Football Whispers has taken a trip down memory lane and ranked the top 10 group phase games of Europe’s elite club competition….

The equation for Celtic was simple as they entered the last round of matches. They needed to beat Juventus at home and hope that Porto dropped points against Rosenborg in order to advance to the next stage. That task was made even more arduous when Alessandro Del Piero curled an early free-kick into the top corner. But a barnstorming 20 minutes and a virtuoso performance by Lubo Moravcik followed as headers from Joos Valgaeren and Chris Sutton sent the Bhoys into half-time 2-1 in front. A Henrik Larsson penalty and a sublime volley by Sutton put Martin O’Neill’s men 4-2 up as the Italians succumbed to the immense pressure from the Scots. David Trezeguet netted a consolation on what turned out to be a night of heroic failure for the Hoops.

Having drawn 2-2 at the Camp Nou in the reverse fixture, the winner of this encounter would be the favourite to progress as group winners. Max Allegri decided to go toe-to-toe with the holders which resulted in a breathtaking end-to-end game that featured beautiful goals, own goals, a retaken penalty, bookings and goalkeeper heroics. Barca led twice through a Van Bommel own goal and a Lionel Messi penalty which he was made to take again after a stuttering run-up. But back came Milan, inevitably via Zlatan Ibrahimovic and then through the quick-thinking and quick feet of Kevin Prince Boateng. Both teams had chances and pushed hard for the winner with the Blaugrana being left frustrated by Christian Abbiati’s exploits until Xavi edged them in front for the final time. The sides would meet again in the quarter-finals with the Catalans coming out on top. 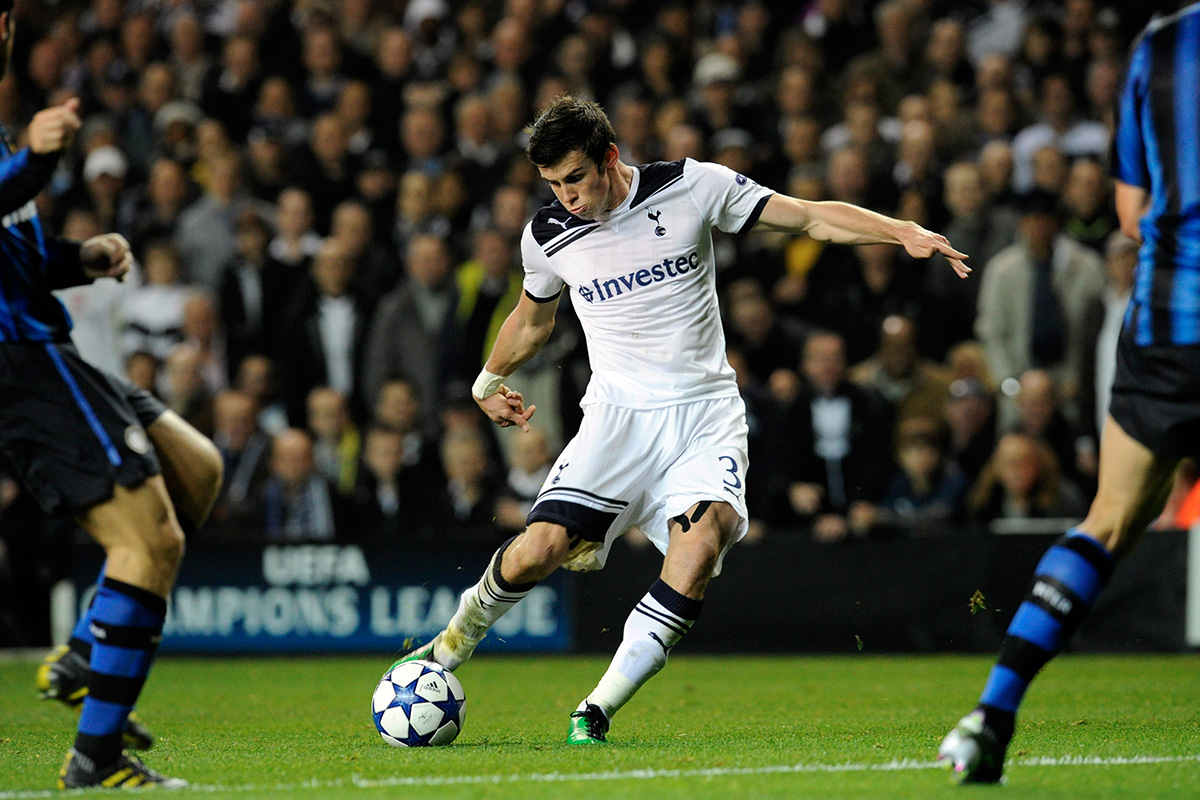 Spurs were taken to the cleaners in the first half hour as goals from Javier Zanetti, Dejan Stankovic and two from Samuel Eto’o established a 4-0 lead for Inter but this match will always be remembered as the night the world took notice of Gareth Bale. The Welshman gave Maicon, then considered to be the best full-back around, a torrid time as he flew past him and others on a run which started from his own half before firing low into the bottom corner. Incredibly, he sent two similar finishes past Julio Cesar in injury time to give the Lilywhites a brief glimmer of hope of pulling off one the greatest comebacks in the tournament’s history.

As recently as matchday two of this season’s competition, this ‘Battle of Britain’ was a pulsating one that had no regard for high quality defending. Most predicted the illustrious names of Man City to wipe the floor with their Scottish counterparts but Celtic were having none of it, pressurising the living life out Pep Guardiola’s charges and taking the lead three times to send Parkhead absolutely wild. The home side’s youngsters- particularly Moussa Dembele and Kieran Tierney- came to the fore, providing the inspiration for all three goals that were pegged back by Fernandinho, Raheem Sterling and Nolito in one of the group phases’ most topsy turvy clashes.

Following a 0-3 humbling at Highbury in the reverse fixture, the Gunners had to win to progress to the next round. At San Siro, Arsene Wenger was without Patrick Vieira, Sylvain Wiltord, Martin Keown and Lauren but he did have a certain Thierry Henry. The French maestro scored a brace and assisted twice as he tore the Italians’ defence to shreds.

Hamburg’s Champions League debut is an occasion that won’t ever be forgotten. The Germans were 2-1 down at half-time as Igor Tudor and Filippo Inzaghi scored either side of a Tony Yeboah header. It looked like the Serie A side had the points wrapped up as Inzaghi added another shortly after the restart but utter chaos ensued. Two goals in seven minutes from Mehdi Mahdavikia and a penalty by goalkeeper Hans-Jörg Butt restored parity. The Bundesliga outfit then completed a remarkable turnaround and thought they were heading from a memorable win when Niko Kovac tapped in from close range but their hearts were broken as Inzaghi completed his hat-trick from the spot with two minutes remaining. Neither side emerged from the group phase but this still remains one of the competition’s most special matches.

It wasn’t often that Newcastle fans were treated to Faustino Asprilla’s acrobatic celebration but on matchday one of the 1997/98 group stage, they witnessed it three times in 22 minutes. In one of the most momentous nights in the history of the club, Asprilla with the help of Keith Gillespie took Barca apart. The Colombian dispatched a penalty then thumped two headers into the back of the net after some excellent wing play from Gillespie to send St James into ecstasy. Barca rallied towards the end as Luis Enrique and Luis Figo ensured there would be some nail biting but the Magpies held on for a classic win that’s still remembered fondly in the north east. 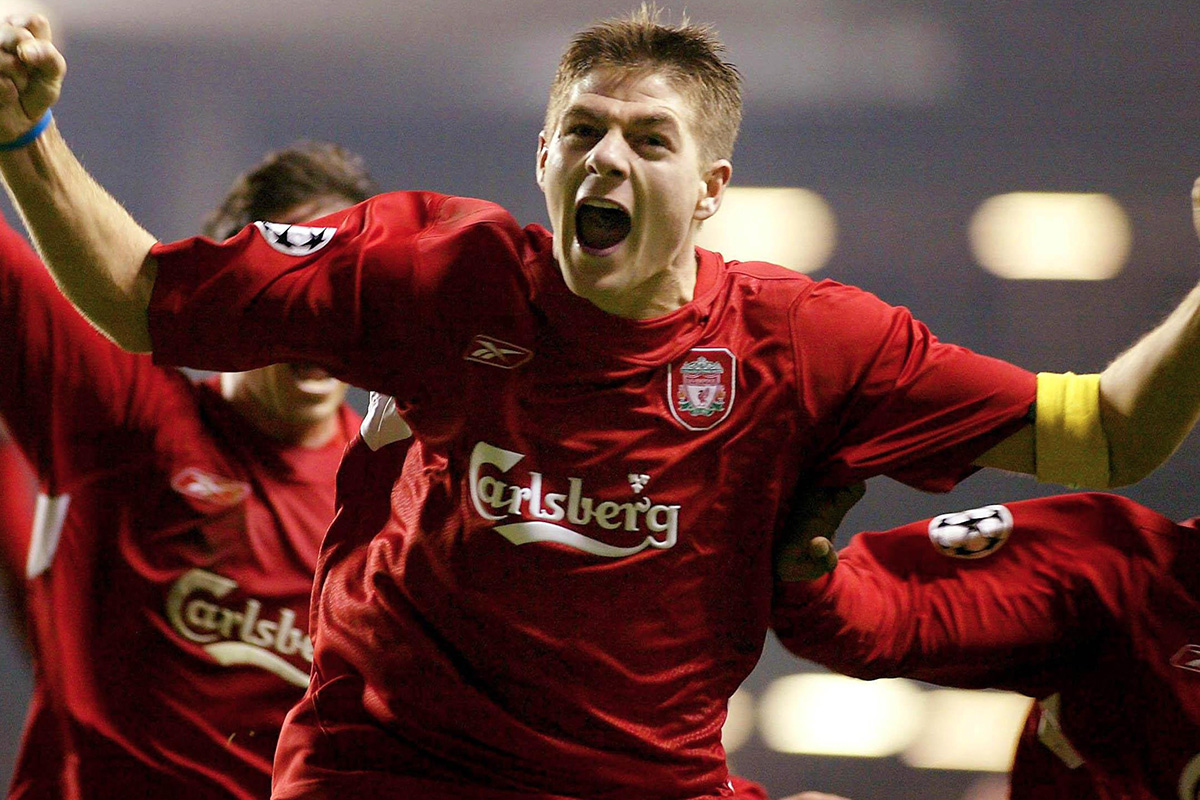 There were a few permutations before kick-off at Anfield on the final round of fixtures. The bottom line was Liverpool had to win and if the Greek visitors scored then they had to win by two goals. That’s exactly what they were facing when Rivaldo placed a free-kick past Chris Kirkland. But a second half blitz pinned Olympiakos backed as Florent Sinama Pongolle and Neil Mellor gave the Reds hope with five minutes remaining. Step forward, Steven Gerrard. The captain connected sweetly with a half-volley from 20 yards which arrowed into the bottom corner and scenes of utter joy followed. It secured second place behind Monaco and what do you know! They only went and won the trophy with a magnificent comeback against AC Milan.

Believe it or not, both meetings between these two giants finished with the same scoreline in 1998. In the second installment of this titanic tussle, Barca opened the scoring through Sonny Anderson inside the first minute but Dwight Yorke cancelled out the Brazilian’s goal on the stroke of half-time. Yorke and Andy Cole caused all sorts of problems for the Catalans, combining beautifully to for the latter to edge United in front before a Rivaldo equaliser. Yorke’s header from a trademark David Beckham cross looked like it was going to give Sir Alex Ferguson’s men victory but Rivaldo stepped up to the plate again, rescuing the Blaugrana with an outstanding overhead kick. United fell second behind Bayern Munich, the very team they would beat in the final… in the Camp Nou.

In Deportivo’s thunderous and unnerving Riazor stadium, the Galician fans were shocked into silence as a Leroy brace and Jay-Jay Okocha strike sent PSG 3-0 up in the north west of Spain. Yet, in a jaw-dropping 33-minute period, substitutes Walter Pandiani and Diego Tristan led a remarkable comeback that completely suffocated the French outfit. Uruguayan Pandiani scored a hat-trick of headers with Tristan netting the other as the Branquiazuis became only the second side in the history of the Champions League to recover from three goals down to win. Super Depor indeed.