Throughout the 21st century, a plethora of talented individuals have passed through Parkhead’s gates leaving a lasting impression that will see their names etched into Celtic history. It’s also been a period of massive success for the club- domestically, at least- with 22 major honours from the last 16 years sitting in the trophy cabinet. Football Whispers looks back at some of the names that have made this possible and picks the best Hoops XI of the 21st century.

The man known as the ‘Holy Goalie’ became a cult hero at the club and not just because he was able to get under the skins of Rangers fans. His last couple of years in Glasgow are best not talked about but before that he was undoubtedly an immense presence between the sticks. Time and again he’d produce wonder saves domestically and in Europe that would prove to be match-defining, often springing from his line at top speed to deny many strikers on a one-on-one. A few other goalies deserve a mention here: Jonathan Gould, Rab Douglas, David Marshall and Fraser Forster all served the club well but Boruc had something extra, an intimidation factor. He was a great penalty stopper to boot.

An uncompromising battler who was never one to be messed with, Mjallby’s no nonsense approach, especially against Rangers, endeared him to pretty much all of the Hoops support. He was the defensive leader under Martin O’Neill, a rock who epitomised much of the Northern Irishman’s era: solid, committed and dominant.

Yes, you read that correctly. Sutton is, of course, known best for his excellent contributions at the top end of the pitch that seen him score more than 80 goals in five-and-a-half years but among the Englishman’s best attributes were his intelligence and versatility. He would often play in midfield, supporting Henrik Larsson and John Hartson from a deeper position but he also filled in at centre-half quite a few times for Martin O’Neill and even strolled through some Old Firm derbies in this role. An all-round complete player and serial winner with a superb attitude. 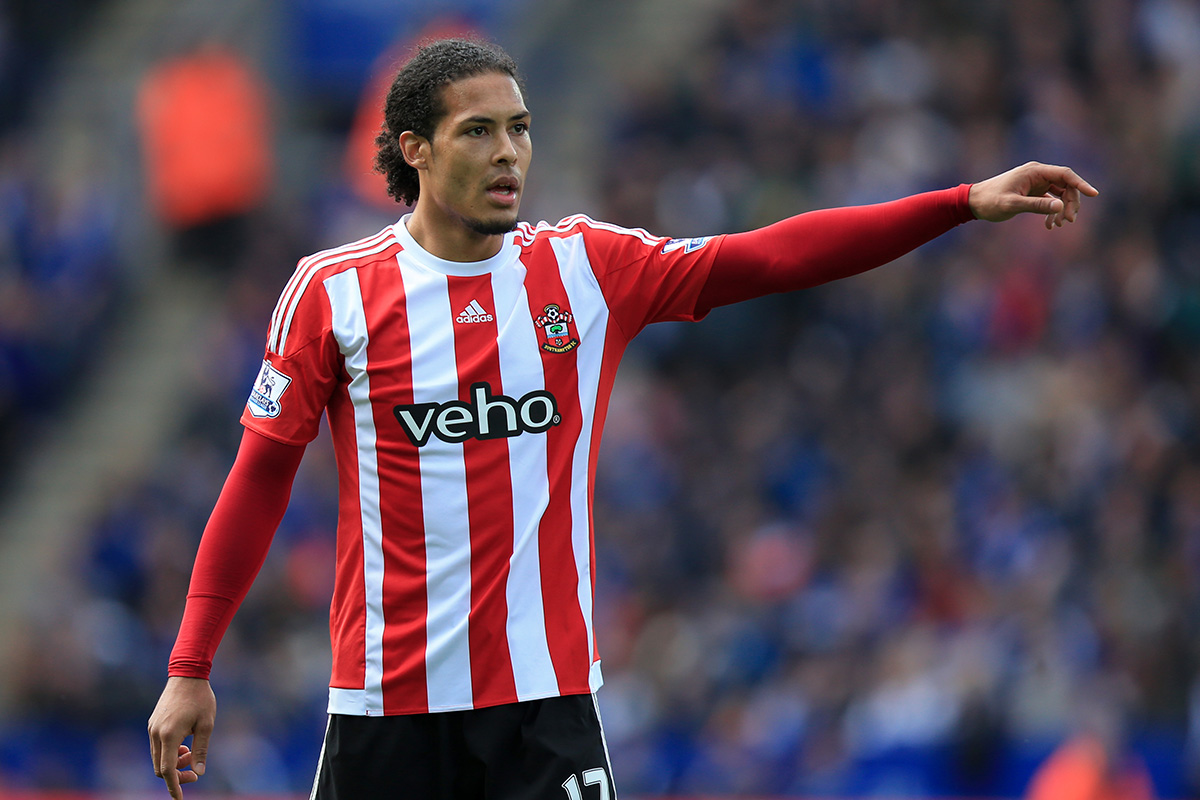 This young Dutchman may have played during the years in which there was little competition for the league title but he still established himself as a force at the back and is consistently proving his move to the Premier League was merited. Van Dijk was (and still is) competent in all departments with a fine combination of technical and physical attributes. As an added bonus, he’s also an excellent ball player capable of stepping into midfield with elegance while he also planted a few free-kicks into the top corner.

The free-kick specialist, however, was Shunsuke Nakamura. Commentators made a habit of saying, “a cracker from Naka,” as 44% of his goals in a green and white jersey came from dead ball situations. Who can forget his two strikes against Manchester United or the one that clinched the title at Rugby Park in the last minute? Nakamura made it look ridiculously easy, then again he made most things appear that way. The Japanese was the chief orchestrator under Gordon Strachan, cutting in from the right side to provide many magical moments at a time when free-flowing football was at a premium.

As far as dynamic box-to-box midfielders are concerned, none in the last 16 years can claim to be better than Stan Petrov. The Bulgarian’s energy in the centre of the pitch was always a massive asset while his timing and composure were traits that defined his Celtic career. The tremendous understanding he formed with various strikers was proof of his intelligence and skill as he was frequently on hand to provide the final pass or killer touch in the box. 65 goals in seven seasons is some going and that extra firepower he added as a complete finisher elevated the attack to greater heights. He’s a player that Celtic have never really replaced either.

With so much attacking flair, the addition of Neil Lennon brings some balance to the midfield. It was tough to leave out Paul Lambert and Victor Wanyama but their Northern Irish counterpart’s defensive nous pips them to the position. For years, Lennon was the enforcer in the middle of the pitch for O’Neill then Strachan, patrolling the pitch so efficiently and giving the more illustrious names in the Hoops jersey the platform to wreak havoc. Nothing was particularly pretty with Lennon nor overly complex but he was a trustworthy figure who stuck to his task rigorously and effectively, winning 11 major honours. 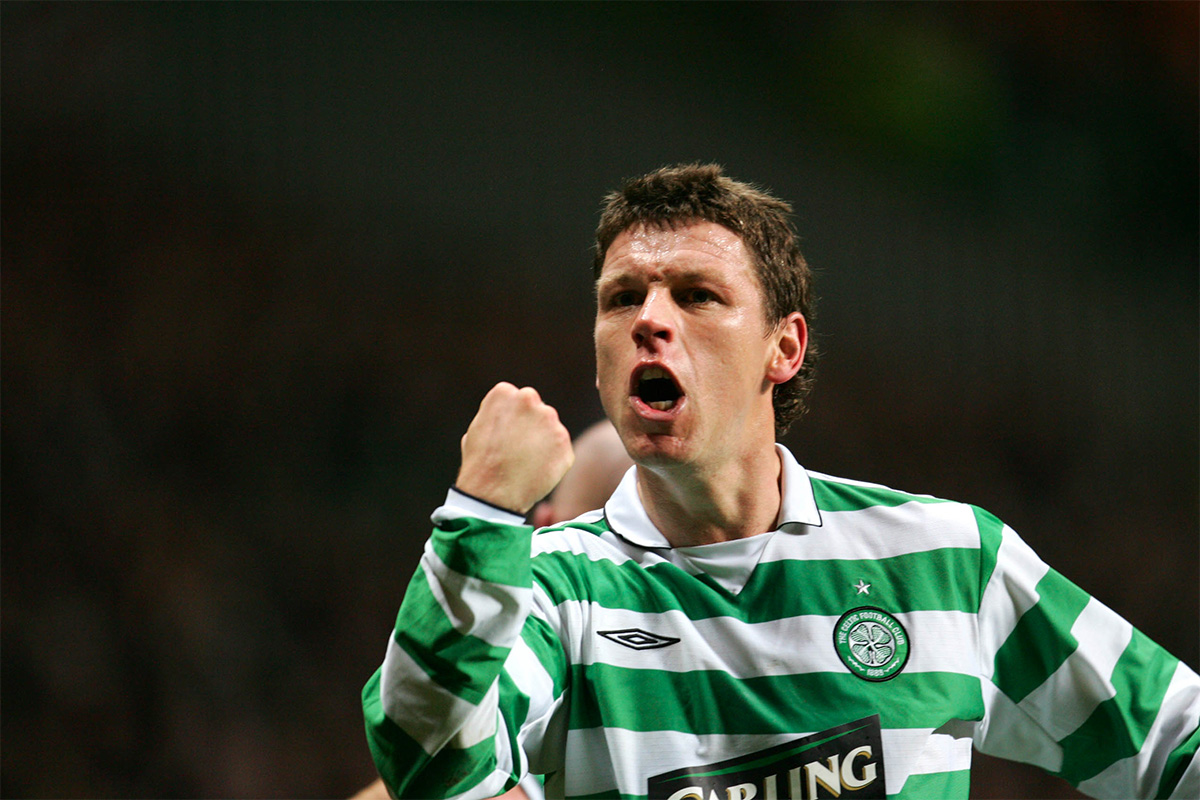 With two deadly strikers up front, the supply into them must be constant. Alan Thompson rarely failed to deliver on that front. From wide areas and set-pieces the Englishman could pick out team-mates with ease with his “wand” of a left-foot, as O’Neill liked to call it, which led to numerous assists during his time with the club. ‘Thommo’ was more than just a wide man, though. He was a robust and tenacious character who always seem to be involved whether it be Old Firm games and in Europe and he quite often saved his best for the grand occasions. The run to the 2003 UEFA Cup final in particular stands out as a tournament that Thompson left a significant mark on.

Has there been a Celtic player who can take inswinging corners from either side of the pitch with such stunning accuracy since Lubo Moravcik? This was just one of the many examples of his technical genius. The little Slovakian playmaker could do it all: dribble, thread passes through the eye of a needle, send pinpoint crosses into the penalty area, score with his right foot, left foot or head and from all over the pitch as well. No opposition was safe when Moravcik had the ball and the manner in which he’d go about his business is what made him so special- so smooth, silky and natural.

Hartson arrived at Celtic the season after Chris Sutton and Henrik Larsson formed a formidable partnership but he’d also go on to have a big impact on the club. His presence up front with Larsson wasn’t quite the same as the Swede’s pairing with Sutton, nonetheless it still proved to be fruitful. Hartson remains the last player to score 100 goals for the Bhoys which is no mean feat and puts him in some esteemed company.

Who else would complete this line-up other than the iconic no.7? Widely considered to be among the top three Celtic players ever and certainly the best of the modern era, Larsson is the first name on this particular team sheet by a considerable distance. Crowned the king of kings by the Hoops faithful, the Swede is a true ambassador for the club, not just for his ability but for his professionalism, passion and loyalty. 242 goals in 315 appearances speaks for itself. He scored every type of goal, from every conceivable angle on every occasion while he boasts a host of collective trophies, individual awards and records to his name. Larsson was quite simply a leader on the pitch who made tens of thousands happy when skies were grey.